Skip to content
To the best of my knowledge, it’s been at least six years since we've written about life behind-the-scenes here at Puget Systems. So we’re going to kick off a whole new generation of newsletters – focused more on the people and less the technology – as we dive into this summer season of 2014. I hope you enjoy this little glimpse of what working at Puget Systems is really like, day to day.
Here we go.

We embraced the first real heat of the year a couple of weeks ago by firing up our Craigslist barbeque, hoping and praying it wouldn’t run out of fuel, and went to town on some burgers. We had Micah at the grill and a whole smorgasbord of summer food. There were short sleeves to be had, sunglasses, and even Richard’s summer hat. Our faithful FedEx rep showed up for a burger, too. Staying awake when we all got back to our respective desks was definitely a challenge.
But it’s only May still, so this crazy spring weather is all over the place. During some slower hours on the less sunny/hot/wonderful days in our weeks, I channel my inner Martha Stewart and get to work on some cookies for a mid-day pick-me-up. Last week I made the best cookies yet, or so said Richard. “Boyfriend Cookies” jam packed with three different chocolates and then some peanut butter chips. Everyone wanted a boyfriend that day. 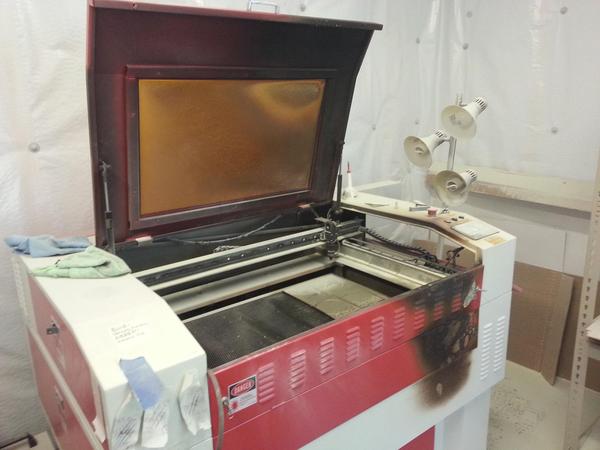 It happened a few weeks ago. I was just sitting at my desk in the front office, minding my own business, when I heard some coughing and looked over. Just outside the window and leaning against a rock wall was Ken, coughing up his lungs. Obviously something was up.
Before I knew it, everyone working in the warehouse was popping doors open left and right and making their way to the parking lot for fresh air. There was an overwhelming stench of burned plastic coming from the warehouse. Ruben filled me in quickly: the laser machine caught on fire. It was a slow smolder for about ten minutes before Ken came to the rescue (hence the cough attack at the rock wall). Apparently Ken smelled it before anyone else, but they all saw the smoke at about the same time. John immediately went over to see what was going on, but when Ken saw him lift the lid of the laser machine and saw the flame, he pulled John out and made all the guys get out of the room. It took a couple of tries, but Ken got the fire out and finally ran out to get some air, which is when I saw him and realized something was going on.
Thankfully nobody was harmed and the laser machine was the only thing to go. We got insurance onboard, installed a new laser cutter, and had some more sprinklers and fire alarms installed. All is well that ends well.

In which Puget Systems participates in their first (Mini) Grand Prix 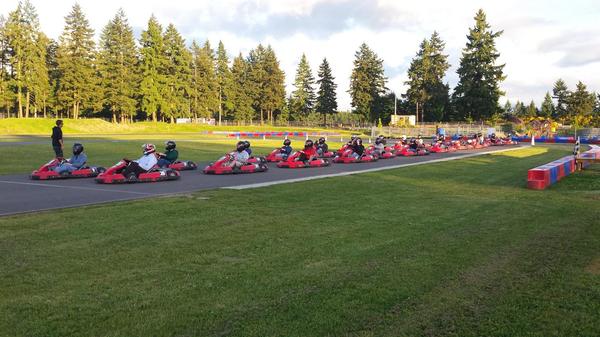 The day started off with lots of rain and clouds, but by the time we got to the track the sun was out and drying things off. Heidi had a picnic table completely loaded with different delicious foods: hamburgers, real hot dogs, beef brisket, several different salads, and tons of brownies etc. There were also lots of significant others there that night, along with a couple of cute babies. It was fun seeing everyone.
After throwing on our head socks and some very smelly helmets, we got in the karts. Round 1 was just a practice run, so there was no judging when people ran off the track or spun out around a wussy corner. Round 2 we went for best lap times (or was it average lap time?). Round 3 the pressure was on. We all lined up and went off in a pack together (see above photo). There were some crazy drivers out there. Not surprisingly, Jon took first, with Jeff right behind him, and Dan was a close third. I don’t even know how many times they lapped me, and I’m sure I’m not the only one that can say that.
Several people reported back a few days later that they were pretty sore, and had some pretty good bumps and bruises from the rough corners and spinning out, but nobody really got hurt. Bumps and bruises aside, the evening was a blast. Go Karts that go 50mph and 20something people on the track make for a good time.
I think it’s safe to say we’ll be back again next year. 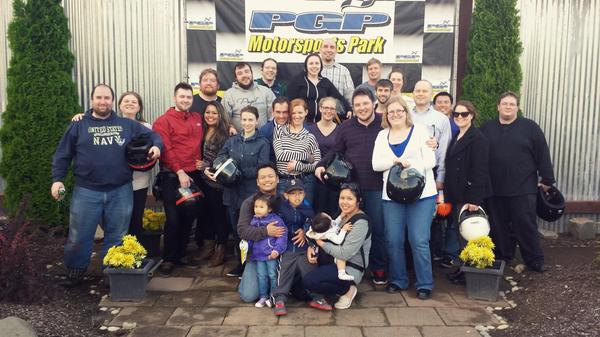 No really, keep reading. Food is always important to talk/read/write/obsess over, and we all really love food (and caffeine), so I’m gonna tell you about it.
I sit at the front desk, so I see almost everyone walk in and out every day, and I see a lot of food. A lot of it is fast food, some leftovers, and a lot of Top Ramen and rice.
The other day I called Jimmy John’s from my cell phone. I barely got through ordering my Beach Club Sandwich on 7 Grain bread before they asked me if the order would be delivered to Puget Systems. Creepy, but maybe well deserved. Sometimes two or three of their delivery cars can be seen in our parking lot within the space of an hour. William, however, does not approve of our JJ’s consumption as they only offer provolone cheese. It’s a hot topic here in the office.
Every once in a while we get an email from Jon with photos of massive amounts of food that Heidi, his wife, has made and is bringing into the office for everyone. We’ve had pasta and tons of buttery garlic bread, big bowls of steaming soup, and homemade brownies with ice cream and chocolate sauce. The list could go on. This is a fact should be mentioned in the “benefits” section of the new employee handbook, right next to insurance and vacation policies.
My contribution to the office comes in the form of cookies. From what I can tell, most people have a soft spot for cookies and this office is no exception. So every once in a while I wake up a little earlier and throw together some cookie dough, waking up my neighbors with my noisy Kitchen Aid, and bring it into the office to bake. Believe me when I say I am on nobody’s bad side those days. So, let’s wrap this newsletter up with a recipe (yes it’s from my personal collection, and yes it’s delicious, and yes pumpkin is for all seasons which is why you can find it in tin cans, thank you very much – or just save it for fall!). Enjoy!


1. Preheat oven to 350 degrees F. Line a large baking sheet with a Silpat baking mat or parchment paper and set aside (or, you know, the usual butter method works, too).

2. In a medium bowl, whisk or sift together flour, salt, baking soda, baking powder, and spices. Set aside.

3. Using a mixer, cream the butter and sugars together until light and fluffy, about 3-4 minutes. Add the egg, vanilla, and pumpkin and mix until combined, about 3 minutes. Slowly add in the dry ingredients. Mix until just combined (this cannot be stressed enough). Stir in the chocolate chips.

4. Drop by large, rounded tablespoons onto prepared baking sheet. Bake for 10 minutes or until cookies are just beginning to brown around the edges. Let the cookies cool on the baking sheet for two minutes. Transfer to a wire cooling rack and cool completely.

5. Eat by the handful and rave about how much you love pumpkin.