CPU Coolers and My Experiment

I wanted to double check the accuracy of a certain CPU cooler from Noctua. Mainly for my own curiosity as well as part of our ongoing process to ensure we are only selling high quality parts to our customers. To your right is a Noctua NH-U12S CPU cooler.  It did very well through our testing, and was added to our product line. When we qualify a new product to be a fit for our product line, everyone is emailed all of the details about the product and given a chance to offer opinions or concerns as part of the process. I had some concerns based on a combination of the pictures of the product and the manufactures specifications not quite lining up in my mind.

Before I get into it, if you do not know much about CPU coolers, I want to give you a quick run down of how the air coolers work.

Heatsinks use either copper, aluminum, or a combination of the two in order to move heat from the base of the cooler through heatpipes to the heatsink. A fan then blows air through the heatsink to move the heat into the air, and then out of the system, effectively keeping the CPU within safe operating temperatures. In contrast, a liquid cooling system essentially uses the same idea but replace the copper heatpipes with tubes filled with a thermally conductive liquid that is pumped to a radiator. Copper is a very good thermal conductor, aluminum is about half as good, and air is absolutely pathetic. I will explain the differences in further detail in the next section. 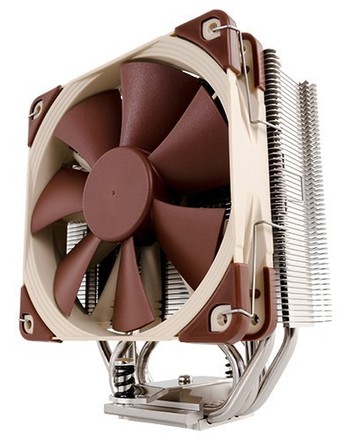 How does a CPU cooler work exactly?

Thermal conductivity (how well materials transfer heat) is measured in watts per meter Kelvin. I know that sounds like gibberish, but we do not need to understand the science so much as to pull the nice even numbers scientists have worked hard to get so we can have a real number we can look at to gauge the differences between materials. These numbers here are not absolute, as different purities of materials have different properties, so you will see all sorts of numbers if you do some research on the topic. But for comparative purposes, lets use these numbers I have found.

This is the same reason why the sun takes many hours to heat up the air in the morning, but it takes only a few minutes to heat up a piece of metal (if you have morning frost you will notice this).

So the way a CPU air cooler works is pretty simple!

A base (usually copper, but aluminum on lower cost units) connects directly to the heatplate on the top of a CPU. The heat then gets transferred from the CPU heatplate through the thermal paste, which is used to ensure any gaps between the CPU heatplate and the CPU cooler base are filled. The base then connects to heatpipes in the CPU cooler. The base and heatpipes typically contain copper, as copper's thermal conductivity is very high.

The heatpipes have a solid shell, a porous inside, and a hollow center that contains a liquid/gas. As heat gets transferred from the base of the cooler to the heatpipe, it heats up the liquid to the point of evaporation which turns it into gas. Once in gas form, it moves through the center of the pipe until it gets cool enough to condense back to a liquid. Once it is liquid again it flows through the porous material until it gets back to the base of the heatsink to get hot enough to evaporate again.

The heatsink contains a large array of fins, typically made from aluminum.  The heatpipe will deliver heat into the fins, which are spread out thinly so that the airflow through them can dissipate heat easily.  Since they're designed to cover a large area, they don't need the high level of thermal conductivity that the heatpipes and base need.

Now, going back to why I wrote this - the manufacturer specifications said the materials were a copper base and heat pipes with aluminum cooling fins. Copper is the color of a penny and aluminum is the color you see on the Noctua cooler up above. Because they stated that it was copper pipes and a copper base which you would expect on a really high end cooler to have, I was confused when in the pictures of the product, it looked like aluminum. I was skeptical of the manufacturers statement that it was zinc covered copper. So I went and got a heatsink and (with my boss's permission) started to use a filing tool to file off the metal to prove if that was an accurate statement. After removing the coating of zinc, I discovered that indeed, the base and heatpipes were made of copper. Not only were my fears resolved, but Noctua was proven by fire once again to have a solid product. But I was able to have fun with it! Here are some pictures to prove I can break things too! 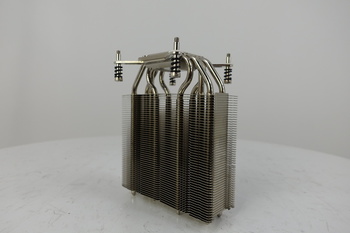 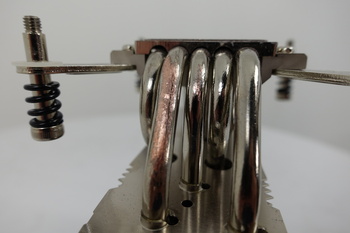 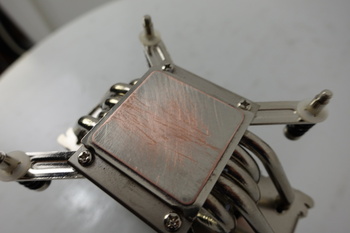 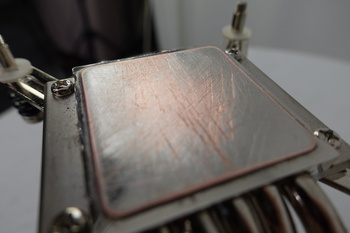 Here you can see the heatsink which has a copper heatpipe, and the copper base which were exposed after filing off the zinc coating. Zinc does not have as good of thermal conductivity as copper or aluminum, but being as it is such a small amount of it (a very thin layer like paint) It does not really affect the cooling ability of the unit. It was likely done as Zinc is resistant to corrosion and copper as we know can corrode.

After reading this, you probably think I like to break some of our new products, but that is not the case at all. And to make you feel better about me breaking perfectly nice things, after I was done attacking this cooler, I sanded down and cleaned the unit and we will actually use it internally for a specific use. After reading this article, I hope you have a better understanding of how CPU coolers work and also learned a little bit about how we test new products.