Written on June 2, 2021 by Ken Colorossi
Share:
Table of Contents

If you talk to any of my friends, they will tell you to not get me started talking about virtualization. I have done everything I can to virtualize every computer function in my home. Everything from my home automation, web server, media server, to the game servers I host for myself and friends. So, what about the gaming computers in the home? Most things are easy to virtualize because they don’t need things like direct input from peripherals or output to a monitor. However a gaming system needs these. But, what if we could build a system that could handle the requirements to play video games for several people in one box? Shared resources, access from different kinds of devices from inside and outside the home.

After many hours of searching online I found many people running their systems on Linux with a Windows 10 VM to play games in. One of my colleagues, Jon Allman wrote a blog post about his personal experience doing just that. But this isn’t what I wanted to accomplish. There have been a few YouTube videos produced by Linus Tech Tips as in 7 Gamers, 1 CPU and 2 Gaming Rigs, 1 Tower. But these systems were designed with all the users being in the same room as the system. I wanted something that could be tucked away in a server rack in my garage that could be remotely accessed.

There were several things I had to consider before jumping into this project.

I knew that I was going to need pretty decent hardware, because in the end I wanted to be able to host two to three gaming virtual machines. Your average AAA game title has a system requirement of a 4 core CPU and 16Gbs of RAM. I picked up a x299 Motherboard (to have enough I/O to support all the parts I wanted to be able to add), an Intel Core i9-7940X for its high core count (this would be enough for 3 VMs with some overhead) and the IOMMU (input–output memory management unit) function, this allows for hardware pass-through as well as enough RAM and Storage. Finally I have a NVIDIA RTX 2080TI that I plan to use for our test virtual machine. But, in the end we could go with a more mid range card like a NVIDIA RTX 2070 Super. As stated before I have a server rack in my garage, this unit will be going into a rackmount case but there isn’t any reason a normal tower wouldn’t work.

For software I will be using Windows 10 Pro for the VMs, and for the server OS, I will be using VMWare ESXi mainly because I’m familiar with it. It also has a lot of hardware support along with a nice web UI to work inside of so it’s a good choice. There are several other options you can use, but ESXi is my preferred choice.

After building the server, getting ESXi set up, building my test gaming VM, getting the video card to work (that one was a battle that took a few days because NVIDIA hadn’t released their beta driver that supports this yet) DOES IT WORK?

YES! Well mostly. Remember those anti-cheat tools we talked about earlier. To my dismay the claims were true. Any game I tried in my library that was protected by Battleye or Easy Anti-Cheat would not allow me to use the online function of the game. Rust couldn’t connect to servers, Tom Clancy's Rainbow 6 Siege would keep me from matches, and PlayerUnknown’s Battlegrounds would abruptly close and crash the Parsec session. After a bit of digging, I found a statement on Twitter by Batteye. 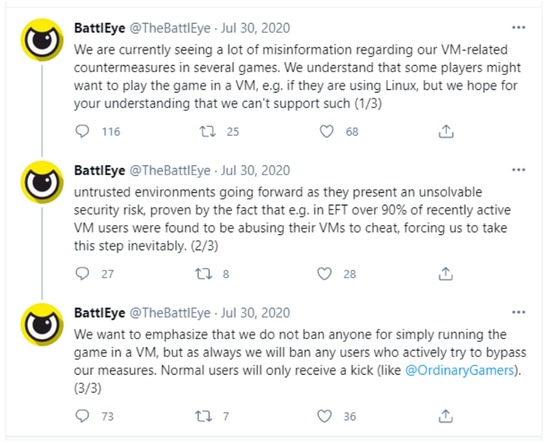 So I guess those games are out of the question for now. But all other games worked great! Minecraft, GTA Online, Killing Floor 2 and Among Us were tested and worked fine. As well as every single player title I tried, so yeah, it ‘works’.

With virtualization and hardware pass-through there is going to be a percentage of performance loss. This is just due to the overhead of the core OS (in my case ESXi). In my testing I experienced an average of 10 FPS loss in-game from what I saw on a physical gaming system. CPU performance felt on par with a normal desktop. CPU loads were around the same when playing GTA online in the VM vs my quad core gaming desktop. When running Crystal diskmark on the SSD that was passed through to the VM the scores were about 50-57Mbps slower than the same SSD in my desktop.

I’m split on how I feel about this project. On one hand, it was awesome getting everything together and really rewarding getting the video card to work. But on the other hand, once I started having problems with playing some of my favorite titles due to the anti-cheat systems it was somewhat of a bummer that I wasn’t going to be able to make this a permanent setup. But I did keep the VM with a low end video card connected so I can check back and see if those anti-cheat tools develop a solution so we can Game in Virtual.

Thank you for taking the time to read my post, Game On!

You said that Linus Tech Tips had made videos only when the gaming server was in the same room. Have your seen their video called "This Replaced Every PC in my House"?

For your setup, was a SFF PC required at each monitor to connect peripherals and send the video signal to your monitor? I just read a brief description of Parsec. Do you basically send the signal over ethernet to the local computer that's next to you monitor?

I'm assuming you used the built in graphics on the SFF machine to pass the video signal thru to your monitor. Even if it is just displaying the video signal from the gaming server, is there a limit to what FPS integrated graphics/APUs can output?

Thank you for telling me about LTTs video "This Replaced Every PC in my House". I missed that video. That is a very cool setup that he built and connecting directly to the server the way they did does help prevent latency.

For my set up using Parsec the SFF PC was required in a sense that Parsec uses a Client/ Host set up. Where LTT was using peripheral extenders off the server. With my set up you could connect with a tiny PC, laptop, smart phone, tablet or full desktop. which is nice if you wanted to move from your desk, to your couch, to on the go

Parsec does stream the video signal over ethernet. It uses the Video Card in the host to encode the video signal. Then uses the graphics/APU of the Client to decode that signal. The limiting factor for FPS is Parsec it self. it only supports 60 FPS to the client no matter how high the FPS is on the host.