For several years, both AMD and Intel have offered five general categories of CPUs:

Something strange has been happening to the middle segment, though: HEDT processors are disappearing!

When I say that high-end desktop processors are disappearing, that is manifesting in slightly different ways for Intel and AMD.

Intel's HEDT line is currently their Core X Series, specifically the 10XXX line, which was a fantastic performer when it debuted… in 2019. You read that right: Intel's current offering in this segment is two and a half years old. Since then, they have released three full generations of mobile and desktop CPUs but have not refreshed their supposedly "high performance" lineup at all. It is now to the point where their latest 12th Gen Core desktop chips offer almost as many cores and much higher performance per core than the Core X models, not to mention newer technology like PCI-Express Gen 5, DDR5 memory, and Thunderbolt 4. It may not have been technically discontinued yet, but Core X is languishing and there is almost no reason to get it now when a less expensive platform offers better features and performance.

AMD, on the other hand, has been knocking it out of the park with its HEDT products over the last few years. Their first generation of Threadripper processors in 2017 struggled with some performance issues, but the second generation in 2018 was a smashing success. The third, and current, generation debuted at the end of 2019 – shortly after Intel's Core X 10000 series – but with up to 64 cores it has had much better staying power over the years. In fact, as shown in my previous blog post, systems based on it have made up nearly 20% of our workstation in the last six months: 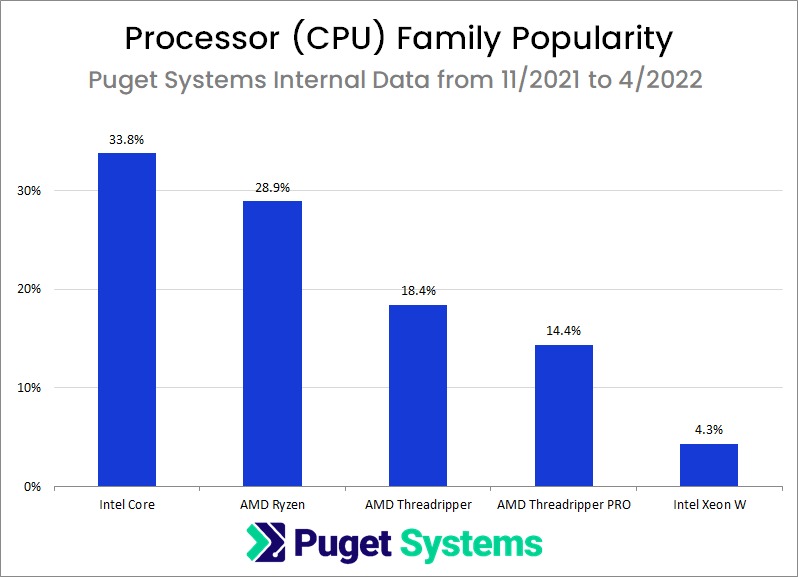 How can I be so confident that AMD's high-end desktop processors have disappeared? While they haven't officially discontinued them, we simply can't buy them anymore! None of our usual suppliers or distributors have them available. Moreover, AMD has already announced the next generation of desktop (Ryzen 7000 series) and workstation (the more expensive Threadripper PRO 5000 series) processors, there has been no public mention of a refresh for the Threadripper line. Between the lack of availability and clarity on this product segment's future, I feel safe saying it has, indeed, "disappeared".

Using our sales records, I can even pinpoint when these changes happened – or at least, when they effected us here at Puget Systems, and by extension our customers: 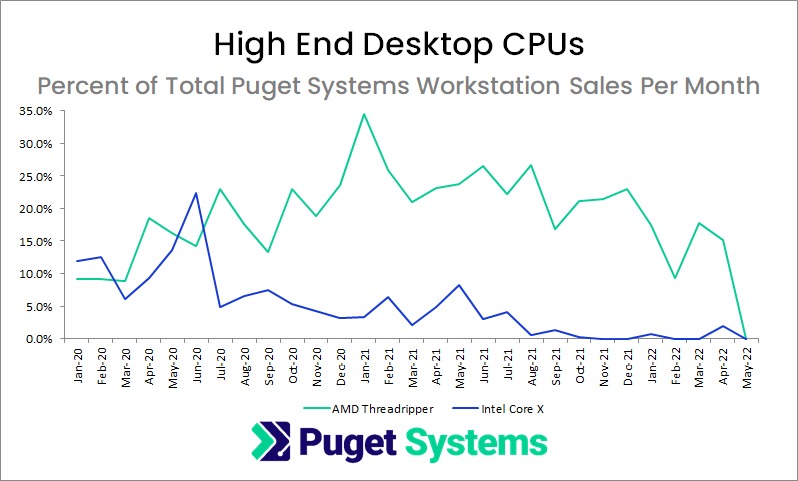 As you can see, Intel's Core X began trailing off in mid-2020 and was effectively gone a year later. By late 2021, the newer 12th Gen Core desktop chips combined with the even-higher-end Xeon W 3300 workstation processors had eliminated almost any reason to opt for the Core X line.

AMD's Threadripper has had strong sales all the way till last month, though… and then nothing. How can I show no sales for May when we are only a few days into the month, though? Easy: we don't have any left to sell! Let's zoom in on the last few weeks: 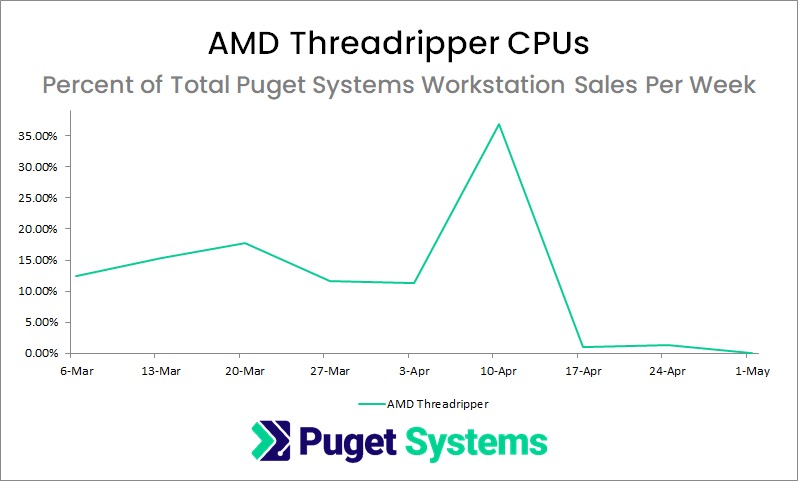 Even if we wanted to – and believe me, we do! – we simply can't sell something that we can't get our hands on. Some of the folks who would have been interested in Threadripper can likely scale up to Threadripper PRO, but it is substantially more expensive (for reasons I'll cover shortly) so it isn't an option for everyone. Instead, we simply have a gap in our product line where HEDT platforms used to exist.

Where have high-end desktop processors gone?

We aren't the only company to struggle with Threadripper availability. Here is a screenshot from Newegg on 5/5/2022 showing their prices on these CPUs: 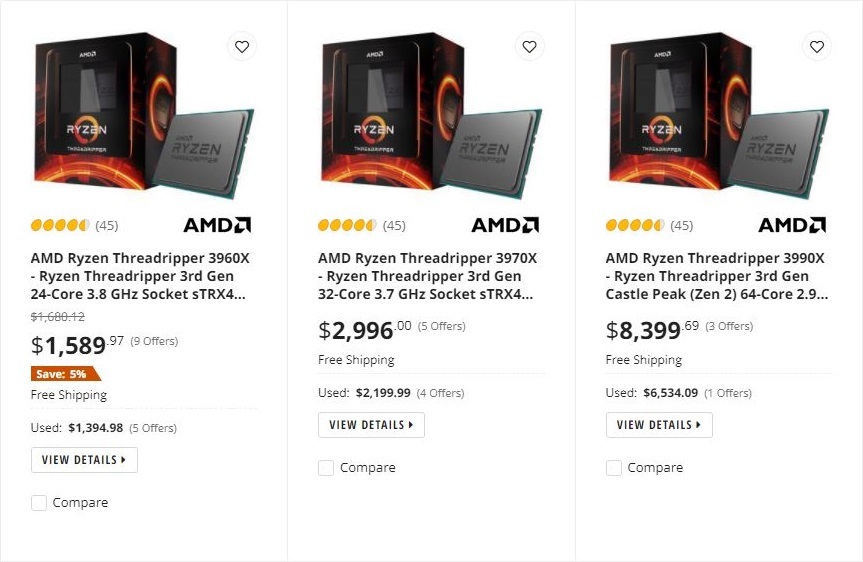 Look at those prices! $2,996 for the AMD Threadripper 3970X is almost $1000 over MSRP, and $8,399 for the 3990X is more than twice what it should go for. That is even more than Newegg is listing the Threadripper PRO 3995WX for, which has the same core count. If you dig into the individual listings, these aren't even coming from Newegg directly – but rather a third-party seller using their marketplace. Prices on Amazon are even higher for the 3960X and 3970X, and the 3990X isn't listed at all.

Crazy-high listings like that indicate to me that there are only a small number of these chips left on the market, and so those who have remaining stock are driving up prices to maximize their profits before they are gone. We saw similar behavior with video cards in recent years, but as supply shortages ease those are coming back down. Since the market price of Threadripper chips is rising, not lowering, I feel pretty confident in suggesting that they are no longer being manufactured.

Why have AMD and Intel stopped making high-end desktop CPUs?

So why is the high-end desktop processor segment disappearing? I don't know for sure, but I can make some educated guesses:

How does the lack of high-end desktop chips affect our customers?

So what does all of this mean for customers in the market for high-end desktop computers? Unfortunately, it looks like compromising: either on performance, by going for a more mainstream CPU instead, or on budget, by spending more money to get the number of CPU cores, PCI-Express lanes, or memory capacity that you may need. That puts a lot of folks in a tough position, though, and leaves a huge gap in system builder product lines.

For example, with HEDT chips from Intel and AMD we could install up to 256GB of system memory – while desktop-class systems max out at 128GB. But now, if someone needs more than 128GB for their workflow, or more than 16 cores, they have to go up to Xeon W or Threadripper PRO. Both of those cost substantially more for comparable performance, but there are also knock-on effects that are not as obvious. Almost all of the motherboards for those workstation-class processors are physically larger, in order to accommodate the high number of PCI-Express lanes and memory channels these chips offer, which in turn means a larger tower chassis is required. So what could in months past have fit in a mid-tower for a reasonable price now requires a full-tower case and costs thousands of dollars more!

Despite the compromises which the disappearance of HEDT processors now requires, this is a place where our technology consultants really shine. They can step in and help you weigh those costs and benefits, to ensure that you walk away with the system that works best for your current needs.

Hopefully, as worldwide supply chains return to normal and CPU technology continues to improve, AMD and Intel will see the opportunity for profit and market share, and return to this segment in the not-too-distant future. I'm crossing my fingers, but not holding my breath.