Klip Collective is an experiential studio in Philadelphia, PA. They integrate projection, lighting, and technology with storytelling to create compelling experiences. Some of their projects include; live digital puppetry, multi-screen live performance, party visuals, water and smoke projections, VR, and interactive building projections. The employees at Klip are a collective group of digital artists ranging from photographers, filmmakers, animators, to composers and programmers.

We had the opportunity to speak with Kevin Ritchie, the Associate Creative Director at Klip Collective and one of the Puget Systems’ PC end users. His background is in filmmaking and he started working with Klip to document their work. Since then, he has moved to the creative side and is doing more activities related to content creation.

After speaking with Kevin, we began to understand how integral Puget Systems is to Klip Collective's work.

The projection mapping server is made up of 2 Puget Systems PC’s, and is used on most of their projects. The software they run on this server is Derivative’s TouchDesigner. The computers are rack mounted in a custom built flight case, with a UPS, power conditioner, networking switch, audio interface, and monitors. The 2 Puget Systems server computers enable the folks at Klip Collective to have eight 4K dedicated video outputs along with 2 GUI outputs.

The Puget servers help Klip Collective with the following projects: Red Bull Art of the Can, Donald Trump Takes Philadelphia, Adult Swim's Upfront Party. Most recently, they used it for The Librarian, which was featured at the projection mapping festival D'lectricity.

Touchdesigner is the main software used on the servers. Klip uses it to play back the videos they make and then it also does the projection mapping on the different surfaces – mapping the geometry to the building or other surfaces being used as the display. They also use other animation tools such as the Adobe Creative Suite, Houdini and Cinema 4D to make the videos that are projected.

You can check out the details and see videos of them here:

On another project, Klip also uses a Puget Systems PC to run a Tornado Simulation VR experience that has traveled to several cities. Using the HTC VIVE, this experience places users inside a home that is destroyed by an F2 tornado. In addition to the VR head-mounted display, they also used haptic elements such as rumble packs in the chair and hidden fans that were triggered at key moments as the house was destroyed. The whole project was a huge success.

The Librarian – Dlectricity 2017 from Klip Collective on Vimeo.

The challenge Klip faced was that they wanted to have a more cost effective solution for projection mapping to use on smaller, shorter run projects that didn't have budgets for systems such as Pandora and D3. They needed a system that had significant GPU power and a lot of video outputs.

Projection mapping, also known as video mapping or spatial augmented reality, is when technology turns irregularly shaped objects into surfaces that can be used for a display of some sort. It’s a projection technique that uses videos and images that can be displayed on anything from water, to buildings, to various objects. When used with a specialized software, it turns the 2D & 3D objects into a visual display that mimics the real environment that it is cast onto. 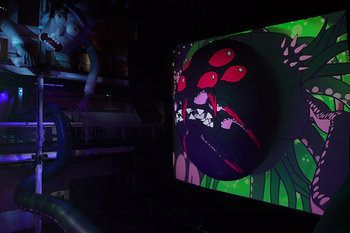 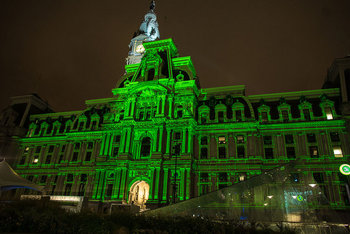 The Puget Systems PC’s, powered by NVIDIA Quadro M6000s, allow Klip to run up to 8 projectors at once with their projection server. This gives them the ability to work on very large scale canvases such as the City Hall in Philadelphia and the Detroit Public Library. Having their own in-house projection mapping server also allows them to do R&D and experiment with new techniques, such as adding interactivity into their experiences.

For years they were a Mac-only studio, but with the advances in the GPU architecture and rendering engine capabilities, Klip had to take a serious look at bringing PC’s into the mix. They knew they needed their own projection mapping server, so when the decision was made to do it, they realized it would be important to partner with a vendor that could supply not only the actual workstation, but also the support they needed for that hardware. They also knew the server would be traveling out of the studio and be exposed to all types of weather and environments. It didn’t have the luxury of sitting in a climate controlled building like the other workstations. So Klip needed a PC builder that could supply them with a high level of support while they were on location.

Puget Systems was originally recommended by a colleague of Kevin’s. After looking at our website, he was impressed with the inventory, price, and support plans we offer. Kevin enjoyed the ordering process as well and found that Puget Systems’ Technology Consultants and Technical Support representatives were always extremely helpful. Since the original purchase in August of 2015, the servers bought have been on the road, through crazy weather from hot temperatures to wet and dirty environments and they are still running great with no issues! They needed something professionally built and to feel a sense of comfort knowing the product and hardware had been tested and will be supported by Puget Systems.

Are you looking for server or VR solutions similar to those provided to Klip Collective? Check out our solutions below!