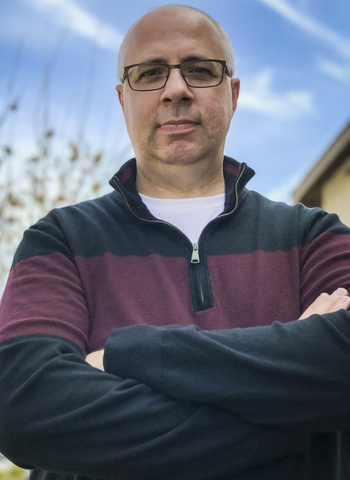 Ben has worked in the entertainment industry for more than 23 years, where he benefited from the knowledge and past experience of many of his colleagues. With beMOTION.dESIGN, he wanted to find a place where he could focus on his own creative passions, and while doing so, give back and help the next generation of creatives in their journey into the entertainment industry.

Ben's hope is to share his love of filmmaking and the movie business with others.

In addition to a handful of different tools, Ben relies most on his workstation. Every task he works on from music to editing to motion graphics and 3D requires a powerful workstation.

As for the software, Adobe Creative Suite is his primary software tool. He also uses Cinema 4D and Octane along with all the Boris FX products. For music writing, scoring, and production, Ben uses Cubase, Ableton, and Logic Pro.

Ben prefers Canon products for his photography and cinematography.

It's pointless to spend thousands of dollars on a machine that takes you out of the creative flow when you're spending more time getting the machine to work than you are using the machine.

The pace at which technology changes has proven to be the biggest technical challenge. As more parts of his workflow move to a digital format, it places more pressure on Ben to have a workstation that's up to the challenge.

And yet, Ben didn't know a lot about the PC side of things before working with Puget Systems. What he did know was that everything needed to work and not slow down his workflow and creative process. He'd used a Mac for over 15 years, and still does for his music and audio production. It wasn't until he began using third-party render engines like Octane that he realized he needed more power.

A bad experience using a Sony Vaio back in 2005 had soured him on the PC, yet he understood that utilizing an NVIDIA graphics card would increase his performance in Octane.

I knew there were other companies that built workstations for creatives, but the moment I had my first conversation with Wilson, I knew Puget was different and they cared about how I would use the machine.

Ben was turned on to Puget Systems when he found out they built workstations specific to the creator's needs. One goal he had with the new machine was being able to fully take advantage of Octane, which he wasn't able to do on his Mac. Puget Systems worked with Ben to customize a workstation that would allow him to take advantage of NVIDIA's rendering capabilities along with providing a boost to his overall workflow.

Customer service is a priority to Ben because he doesn't want to have to tinker around when something goes wrong. Ben mentioned that, from the start, Puget Systems cared about him and his work, and didn't try to upsell him on components that wouldn't contribute to his workflow needs. "This Puget workstation is a beast and does exactly what I need it to do. it just works!"

We couldn't have said it any better.