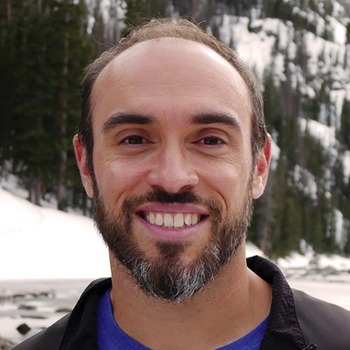 Before EJ joined School of Motion, he was freelancing and teaching via tutorials on his Eyedesyn channel on YouTube as well as LinkedIn Learning and Cineversity. He sort of stumbled into creating tutorials, but by making them, he discovered how much he enjoyed the process of teaching, empowering, and encouraging artists. Hearing how his tutorials helped artists land jobs and projects was a lot more fulfilling than simply completing a client's project. It wasn't long before EJ decided to teach full-time.

His timing couldn't have been better.

About this same time, School of Motion was picking up steam and EJ noticed they were doing some amazing work while fostering an engaged and passionate community. School of Motion was mostly 2D focused, but they wanted to expand into 3D and did so by reaching out to EJ to design a course for them. The project was so successful that EJ eventually joined School of Motion as a full-time educator and creative director.

When you're teaching, you can't afford to wait on a spinning beach ball or a render to refresh when you're trying to explain a concept so speed was definitely important.

As the Creative Director, EJ starts his day by checking out and contributing to his company's Slack channel and community portal called the Square. His main goal is to figure out how to make education accessible to all who want to learn. The cost of an art degree is high, and no matter what school you attend, you'll find yourself filling in those skill gaps with online resources.

Both EJ's father and uncle were talented graphic designers and artists. Even his grandmother was an amazing painter so he grew up in a creative environment. His father would take him to work and let him play on the digital drawing tablets. Even though motion design wasn't really a thing back then, he appreciated the work his father and uncle created and went off to college assuming he'd get into drawing and maybe work for a TV station's graphic design department like his father and uncle.

In terms of applications, EJ relies on Cinema 4D, Redshift, and Adobe After Effects. He also keeps a list of software he wants to learn that includes Substance, ZBrush, Unreal Engine, Blender, and Marvelous Designer.

I've had my workstation for over 6 months now and it's been incredible. And the speed increase from a 2013 Mac Pro to a dual 3090 setup is…uh…noticeable. To be able to just chew through modeling, animation, and rendering is just incredible.

As a creative person, EJ maintains that technology is improving, being updated more frequently, and becoming more approachable for the artists. His biggest technical challenge is keeping up with all the new technology and features, and understanding how to integrate them into his workflow.

When he was getting started, one could get by knowing Photoshop and After Effects, but that's no longer the case. The list of software one must learn in this business continues to grow, which is one more reason having a high performing and reliable workstation is critical to the process because it allows EJ to focus on his creative endeavors rather than troubleshooting computer hardware.

The thing that really impressed me about Puget Systems was that their reputation in the motion design community preceded them. Their understanding of the needs of motion designers was very apparent. This allowed me to basically sit back and let them recommend the best workstation for the apps I use.

As recently as last year, EJ was a life-long Mac user. But over time, some of the applications he used had stopped being updated for the Mac or required a certain brand of graphics card. He began searching for help to figure out what he should migrate to from his 2013 Mac Pro. He knew he wanted a PC, but wasn't sure what brand, model, or configuration would work best.

EJ worked with Puget Systems to configure the following workstation:

EJ mentioned that working with Puget Systems gave him peace of mind because he knew his workstation had been battle-tested before it arrived so he wouldn't have to configure anything or worry about reliability.