Utah State University (USU) is the state’s only land grant institution with a student population of nearly 28,000. Since its founding in 1888, Utah State University has evolved from a small-town college tucked away in the Northern Utah mountains to a thriving research university respected around the world. The Landscape Architecture department at USU is the largest of its kind west of the Mississippi.

Benjamin George is an assistant professor in the Landscape Architecture department. His primary research area is in visualization technologies and the application of technology into teaching practice. According to Professor George, USU is one of the first universities to use virtual reality for design and will most likely lead the way in virtual design research. 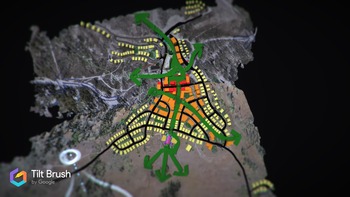 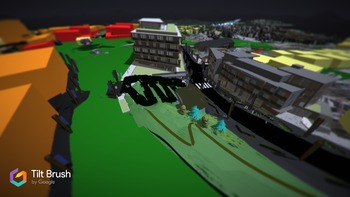 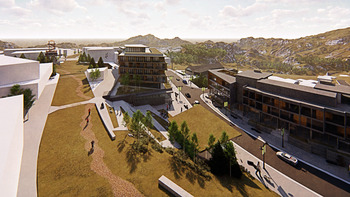 Professor George and his students use three Puget Systems workstations, along with Vive headsets for each. For additional hardware, they use various drones including DJI Mavic, DJI Inspire, Intel Falcon 8+ Drone and Intel Sirius fixed-wing UAV.

As for software, the group uses Pix4D for photogrammetry work to generate models from the images captured by the drones. They also use Tilt Brush, SketchUp and Google VR for analysis.

With a typical project, a client either approaches USU and asks for help coming up with design ideas for a site, or the group actively seeks out a site. Once a site is selected, the group uses the drones to fly to the site to get updated photos to create a 3D model of the landscape. From there, they work to generate a terrain model of the site in Pix4D and then manipulate that model in Tilt Brush or SketchUp. There are times the team will conduct site analysis outside of VR by collecting data on site including everything from wildlife to soil types, where the good views are to what the weather and wind patterns are, and even where the water flows.Then a VR environment is created with that data so the team can visually visit and understand what’s happening on the site.

“That’s really valuable for projects we have students working on a site who are 3-400 miles away,” explained Benjamin George. “It’s practical to take some students there for a visit, but others haven’t seen the site. It creates an opportunity for them to experience the spacial feel of what the site was like, visualize how all the landforms are working, and take all that site analysis data and see how it interacts with the physical reality of the site.”

Once the data is in place, the students are able to start iterating on ideas in a loose, free-form process.

“VR is really valuable because you’re able to understand the spatial interaction and the spatial component of your design, and you’re not having to work through something looking at 2D and trying to imagine what that’s going to feel like on the site.”

Once the concepts are in place, they are taken outside of VR and put into SketchUp to be refined. Edits are made until the project is ready to be presented to the client. Clients can then navigate the site, see the proposal and understand the impacts of the changes.

“That’s incredibly powerful, and that’s traditionally what VR has been for and what most people in the profession are doing is just this last stage,” George continued. “What my team is interested in is all the stuff that happens before that final stage. Because we know you can do that, we know you can give it to a client in VR and it’s great. But it’s even better if you’re able to design fast, design more intuitively, to design better because from the start, you’re in VR and you’re syncing and you’re understanding spatially all your decisions and the impact they have.”

“It's been an interesting project… a good, messy project to work on.”
– Benjamin George

Utah State University is using photogrammetry and virtual reality to design a new, sustainable community on Powder Mountain in the Ogden Valley of Utah. The students spent about five days flying a drone over the mountain to map the area, which is about 800 acres. They have been developing a sustainable community that’s going to integrate with all the the activities the new owner, Summit, has planned to do up there.

“It’s been an interesting project and very different than usual due to size and the complexity of the vision the client had for it,” said George. “It’s been a really good, messy project to work on.”>

Professor George says with previous computers, the software would run out of processing power and the students were unable to finish their projects.

“We had nice computers, they were like $2,000 VR-ready gaming stations with good graphics cards and good processors, it’s just we were overloading them with the work we were trying to do,” explained George. “Not only was it faster with Puget Systems’ computers, we could physically do something we could not do before. It was not possible to process the amount of imagery we were trying to process.”

George says the new workstations have been valuable for making sure the students have a good experience and are comfortably able to work in VR without fear of getting sick.

“We used to think ‘wouldn’t it be cool,’ and realized it was, but it wasn’t possible on our older systems. And we really don’t combat that anymore. We say ‘yes, let’s do this because the hardware’s actually going to be able to do it.’ It’s been liberating as far as enabling us to pursue ideas and experiment and try new things.”

"Not only was it faster with Puget Systems' computers, we could physically do something we could not do before.”
-Benjamin George

“I've never worked with a computer as nice as the workstation you built for us."

“It’s been a fantastic experience. I’ve never worked with a computer as nice as the workstations you built for us.”

Ask Professor George, “Why Puget Systems?” and he’ll tell you he feels the level of and attention to quality was bar none compared to other computer companies. He praised the company’s support team for their immediate help when the team had software issues.