In recent years, AMD has offered three tiers of chipsets for their mainstream Ryzen processors targeting different price points and users. The latest 500 series chipsets are no different, with the X570, B550, and A520 all supporting use of the new Ryzen 5000 Series CPUs - while bringing varying other capabilities to the table.

But what is a chipset, you might ask? For those who are new to this term, it refers to the hardware on a motherboard that facilitates communication between the processor (CPU), memory (RAM), video card (GPU), expansion cards, storage (SSDs / HDDs), other onboard controllers (audio / networking), and peripherals (USB and Thunderbolt devices, for example). Different chipsets are built to support different generations of CPUs, and provide varying amounts of PCI-Express lanes, SATA ports, USB ports, etc.

Most users won't need to concern themselves with the details of what these chipsets offer, since what really matters in the end is the functionality that the motherboard as a whole provides, but for those who enjoy digging into details we've put together this comparison.

Here is a brief chart showing the major differences between these three chipsets:

For those who are more visual, we also found diagrams from AMD showing an overview of each chipset:

What do all of these chipsets have in common?

Before getting into what makes these chipsets different, lets briefly cover the similarities they share. All three chipsets support AMD's Ryzen 3000 and 5000 series CPUs - and potentially the 4000 series APUs, although details about those remain largely unknown at the time this article was written. Each chipset in this family also allows use of the PCI-Express lanes and USB ports which are built into Ryzen processors, though not always at the same speed.

What are the differences between AMD's X570 and B550 chipsets?

Between the X570 and B550 chipsets, the biggest difference is lack of PCI-Express version 4.0 support. This is tricky, though, because the Ryzen processors themselves (the 3000 and 5000 series, which these chipsets support) have built-in PCI-Express 4.0 lanes - and those work just fine at 4.0 speeds with both of these chipsets. The additional PCIe lanes provided by the chipset also operate at 4.0 speed in the X570, though, while they are only PCIe 3.0 on B550. That also means the interconnect between the chipset and the Ryzen processor is only operating at PCIe 3.0 speed on B550, while it is the faster PCIe 4.0 on X570.

Looking beyond PCI-Express speed, the B550 chipset also supports fewer total PCIe lanes and a smaller number of USB ports. B550 has 10 PCIe 3.0 lanes available for expansion cards, additional M.2 NVMe slots, and SATA ports compared to 16 from the X570. On the USB front, the total number drops from 12 on X570 to 10 on B550 - and they are slower, on average, with only two of them supporting the latest 10Gbps speed on B550 compared to 8 such ports on X570. Please keep in mind, though, that the Ryzen processor itself will also provide one x4 NVMe connection and four USB 10Gbps ports - so the total number from the chipset is augmented by those as well.

Beyond costing less, the B550 chipset does have one other advantage over X570: less power consumption. The lack of PCIe 4.0 support in tandem with fewer lanes and connections overall reduces how much electricity the chipset uses, which in turn means that it generates less heat. Most motherboards using X570 require active cooling for the chipset, meaning a fan that can add noise and another potential failure point to the system, while most B550 based boards can get away with passive cooling. 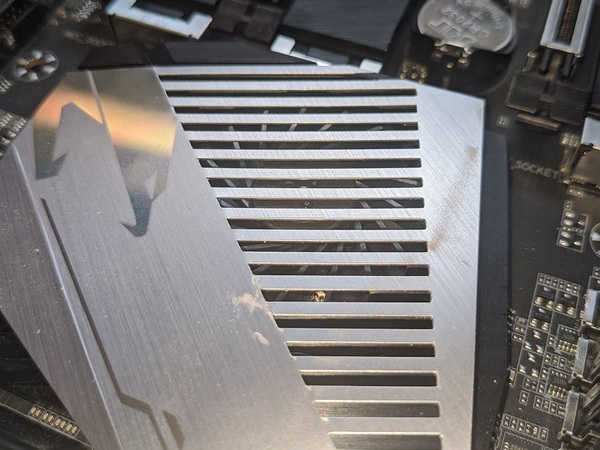 What is different about AMD's A520 chipset?

Compared to X570 and B550, the A520 chipset is somewhat handicapped. Like B550, its built-in PCI-Express lanes only work at 3.0 speed - but beyond that, it also limits the Ryzen processor's own lanes to 3.0 speed. It also does not support splitting the CPU's lanes up to allow use of two video cards, though at the budget price points which the A520 chipset targets that is probably not a big deal.

As is the case with B550, the number of PCIe lanes and USB ports that are supported is further reduced with A520. The number of dedicated SATA ports drops as well: from 4 on the other chipsets to just 2, though some of the PCIe lanes can be diverted to provide more SATA connections if desired by motherboard manufacturers.

AMD has done a good job segmenting these three chipsets, with clear benefits to each. You can probably draw your own conclusions from the information we've presented so far, but if you want my analysis of who the different chipsets are appropriate for - here you go:

A520 - This is clearly the budget option. If you want to get onto the Ryzen platform for as little money as possible, especially if you aren't planning to use any components that would benefit from PCI-Express 4.0 speeds or lots of drives & peripherals, A520 will do the trick.

B550 - Moving up to the mid-range chipset in this family gets you access to the full PCIe 4.0 lanes from the Ryzen processor, and boosts the number of PCIe lanes and ports from the chipset itself compared to A520. Both single and dual video cards can work here, provided the slots on the motherboard are laid out correctly, and one high-speed NVMe drive can be used at its full potential. Combined with the lower power consumption which allows this chipset to be passively cooled, those upgrades make this a solid choice for most folks who are looking for more overall performance and functionality but don't need (or want) to go to extremes.

X570 - The enthusiast option at the top of this food chain, X570 runs all the PCIe lanes at full 4.0 speed. This is ideal for users who want to run a third video card (on the few boards with an appropriate layout to allow that) or utilize multiple high-speed NVMe drives without compromising on transfer speeds. All of that comes at the cost of higher heat output, meaning that you are likely to end up with a chipset fan as well... but if you are running two or three video cards, or an overclocked CPU with a big cooler, you may not end up noticing that extra noise anyhow.

Please also remember that this is simply a comparison of these chipsets, and a motherboard is made up of more than just the chipset. Additional controllers will likely be present to provide things audio, networking, and potentially even more USB ports. Other factors like the VRM design and quality will impact overclocking capability. The board size and slot layout will impact whether dual video cards are feasible. Manufacturing quality affects long-term reliability. And more! So when pondering the chipset for a new PC, keep in mind that in the end you will be picking a motherboard - not just a chipset - and that there are more things to consider when making that selection.