Skip to content
Always look at the date when you read an article. Some of the content in this article is most likely out of date, as it was written on July 19, 2021. For newer information, see our more recent articles.

NVIDIA has a long history of releasing "Ti" variants of their products which in most cases are simply slight upgrades to the base model. With the recent launch of the RTX 3070 Ti and 3080 Ti, NVIDIA is continuing this trend. Compared to the base RTX 3070, the RTX 3070 Ti has the same amount of VRAM (8GB) but has a few more CUDA cores that run at a slightly higher frequency. The RTX 3080, on the other hand, has 2GB more VRAM than the RTX 3080 (12GB versus 10GB) and 18% more CUDA cores, although the maximum boost clock is a bit lower. In fact, in terms of performance, the RTX 3080 Ti should be closer to the RTX 3090 than it is to the RTX 3080.

Ever since After Effects 2015.3, Adobe has been steadily adding support for GPU acceleration which has made the video card an increasingly important part of an After Effects workstation. Most of After Effects is still limited by the performance of your CPU, which means that many users will stick with a relatively moderate GPU in order to spend more of their budget on their system's processor. But, a more powerful GPU can be useful in workflows that utilize a decent number of GPU accelerated effects.

This article is in large part a copy of our previous Adobe After Effects – NVIDIA GeForce RTX 3080 Ti Performance article, simply with results and analysis added for the RTX 3070 Ti. 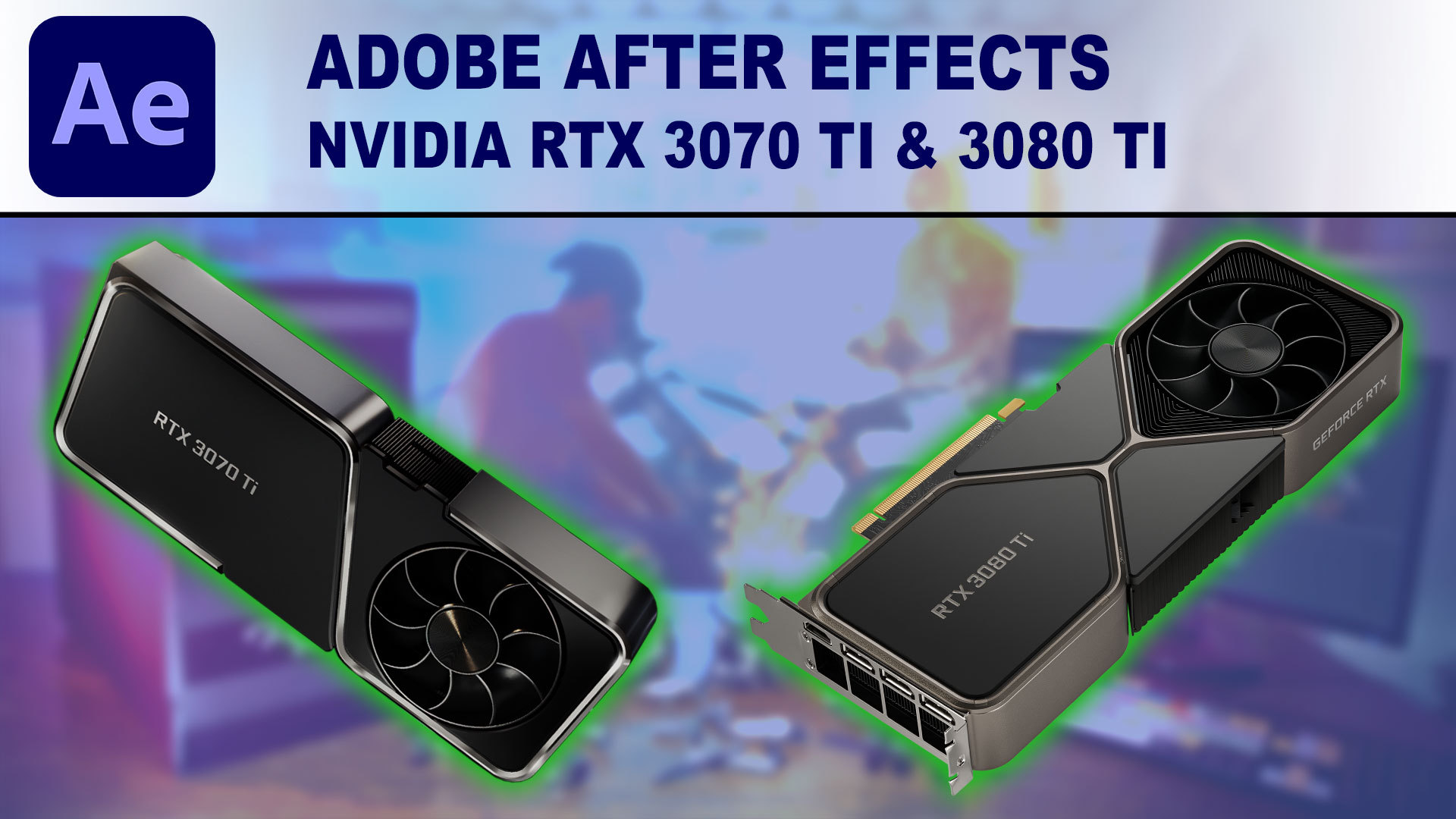 One concern we have is that the RTX 3080 Ti is a 350W card – just like the RTX 3090 – but uses a 2-slot cooler that is essentially the same as what is on the lower wattage RTX 3080. In our testing, this makes it both louder and hotter than any other RTX 3000 series card, which can be a significant concern if your system does not have adequate cooling. 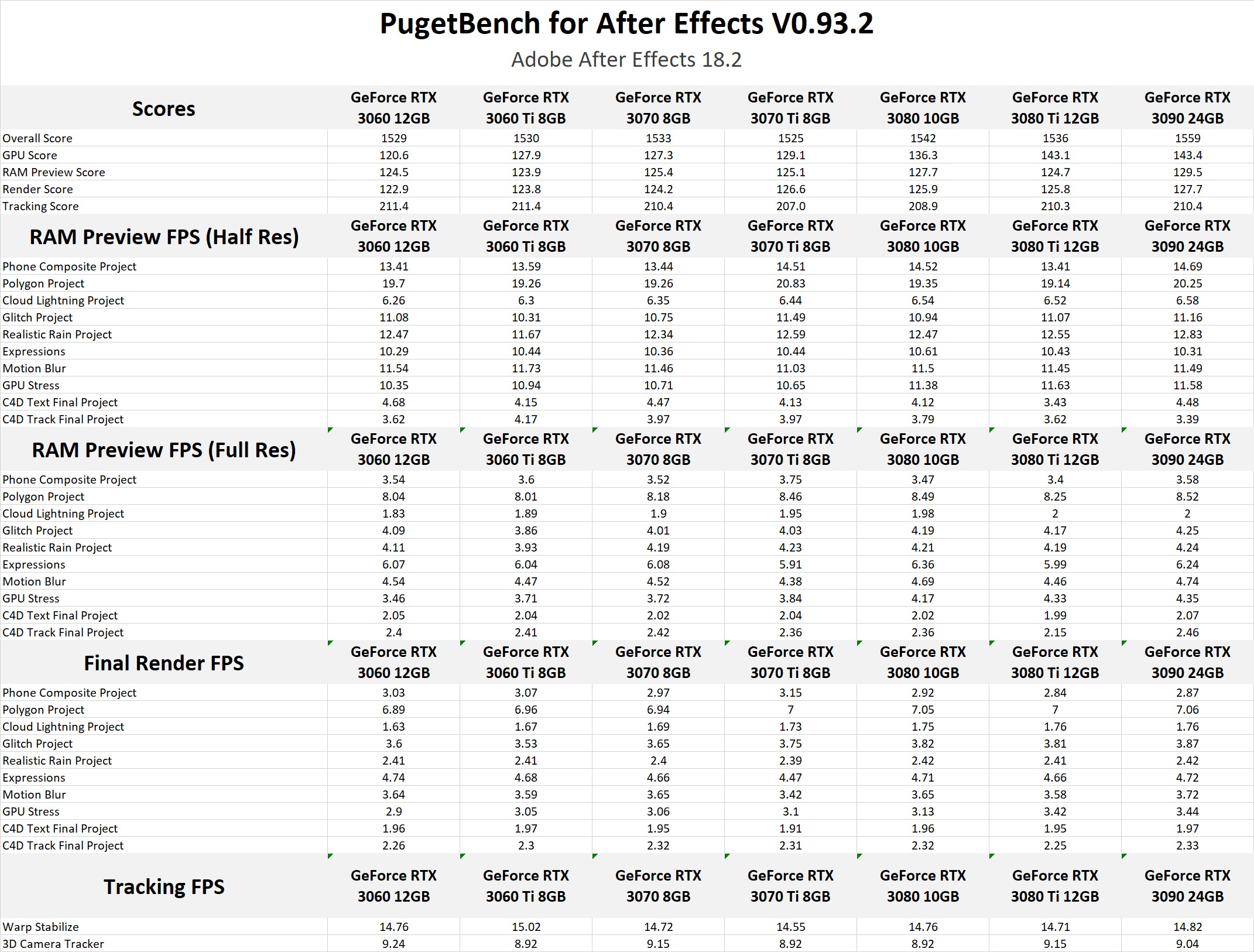 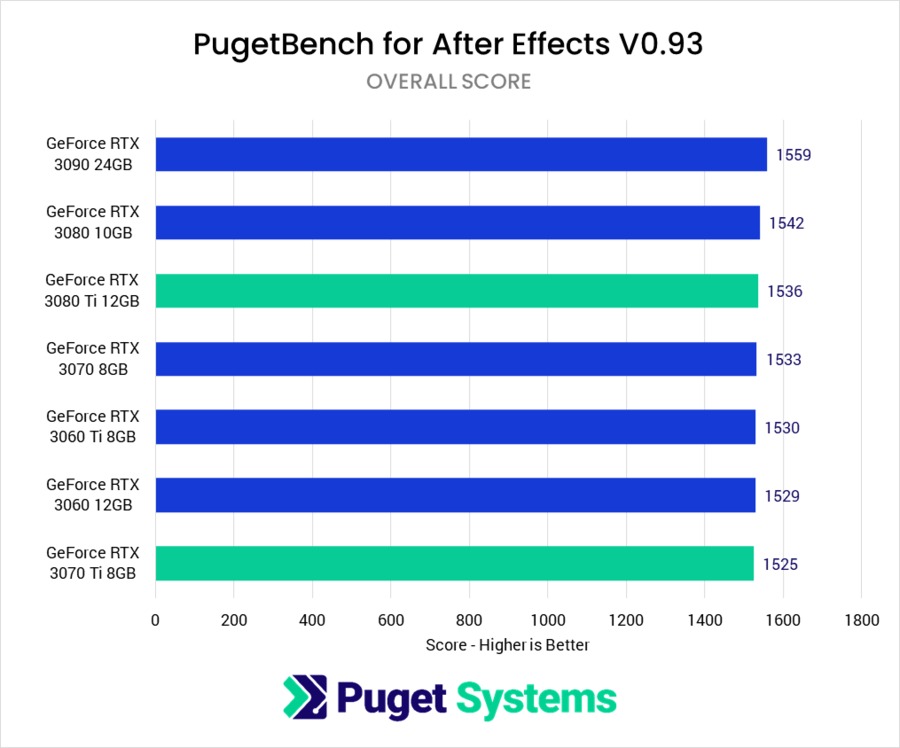 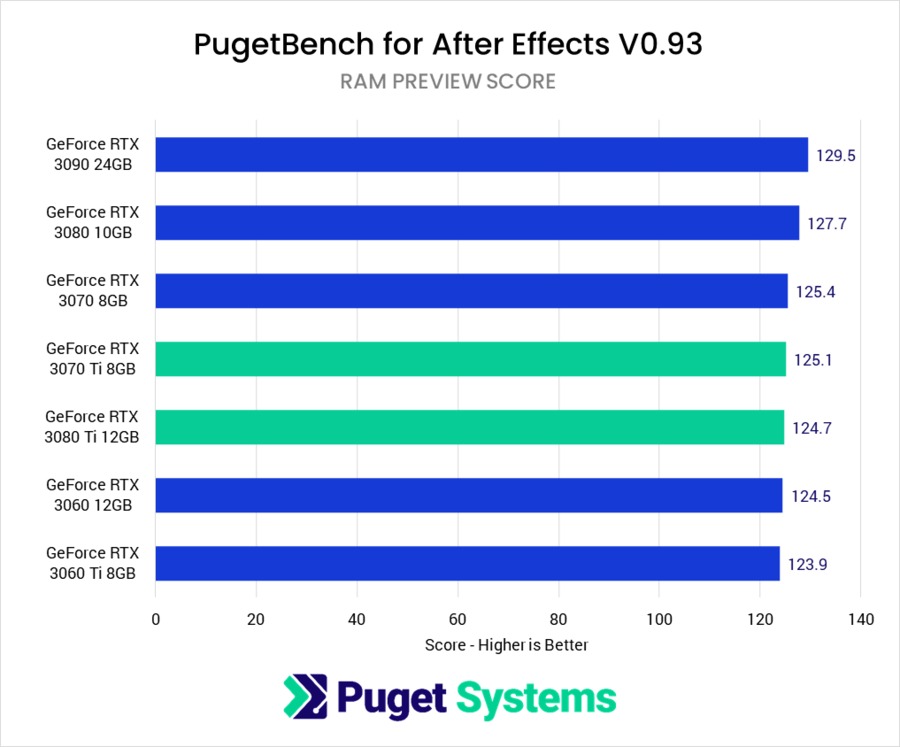 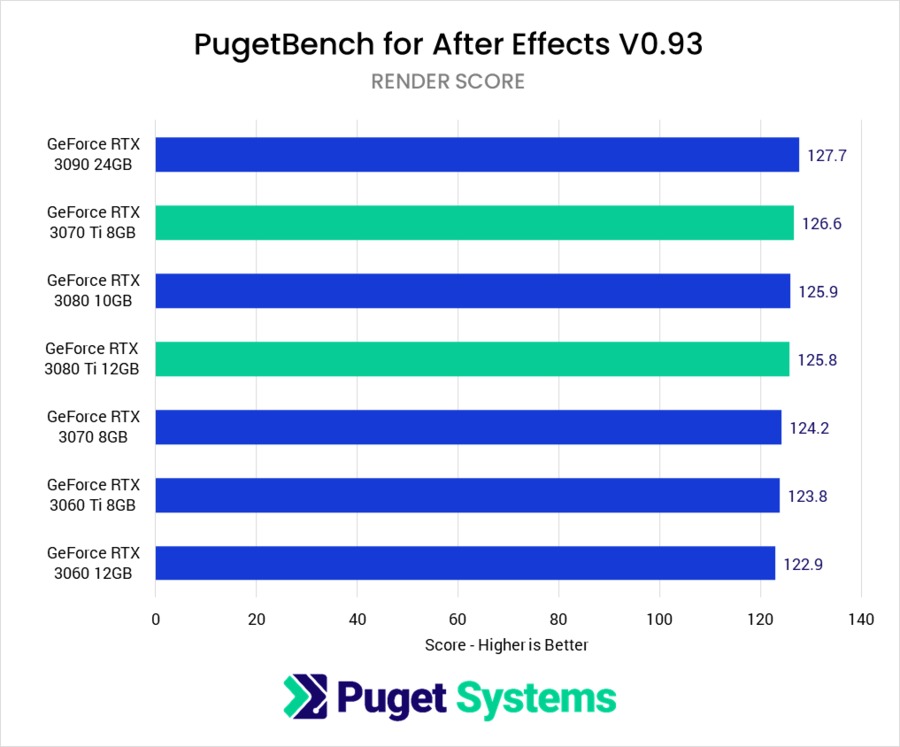 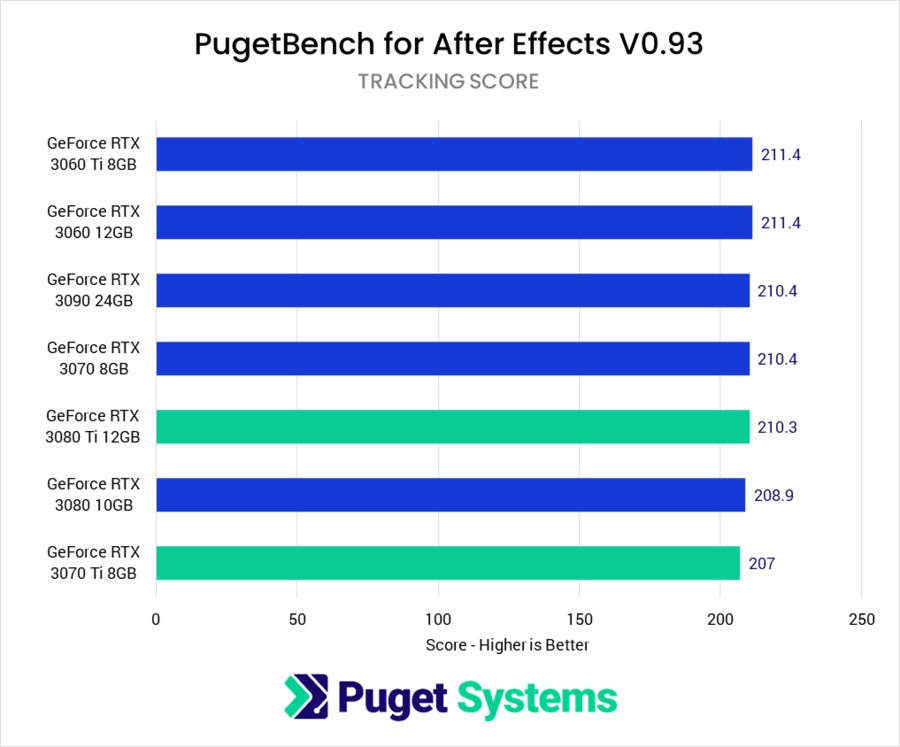 Looking at the Overall Score, there really isn't much to talk about. Since After Effects is primarily a CPU-limited application, all of the GPUs we tested scored within 2% of each other. That is well within the margin of error for this kind of real-world testing and indicates that for most workflows, you won't notice any difference between even an RTX 3060 and an RTX 3090.

In other words, this chart isn't all that useful for comparing GPU performance since all the cards effectively performed the same overall.

However, many of our After Effects tests are very CPU bottlenecked, so to get a bit of a clearer idea of how these cards perform for straight GPU performance in After Effects, we will need to examine our "GPU Stress" project by itself which pushes the GPU as much as is realistic in After Effects. 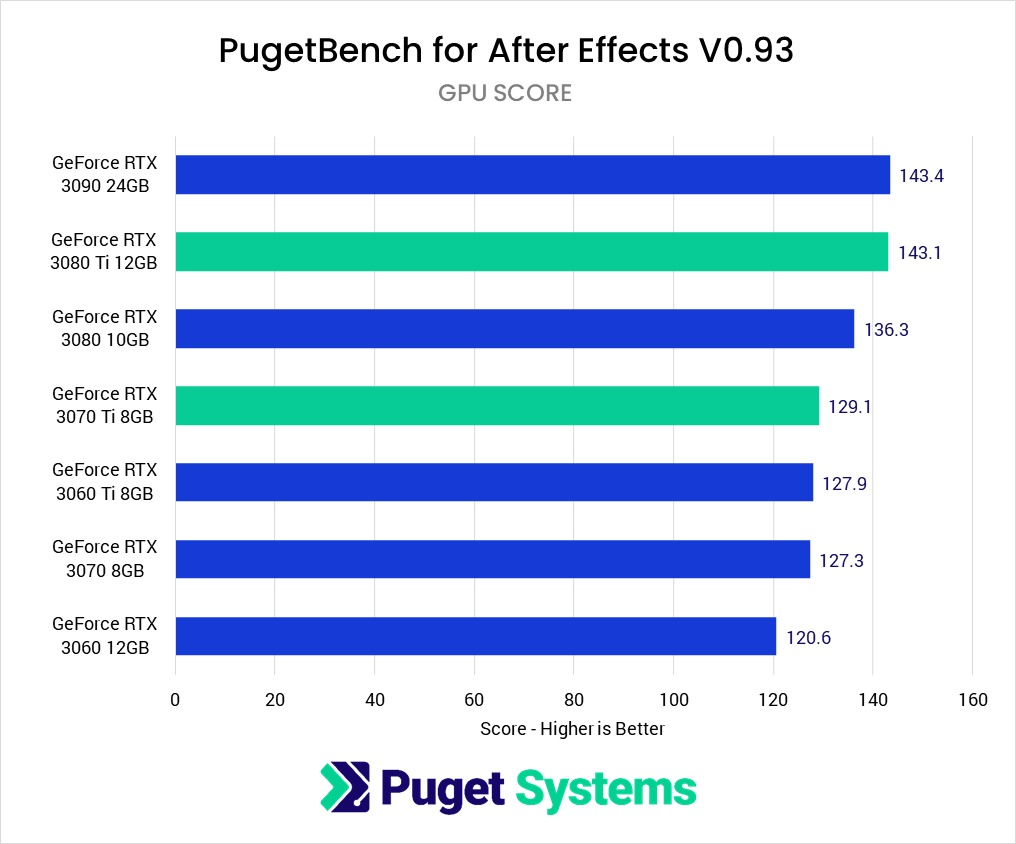 The price of the RTX 3080 Ti is certainly not cheap, and many users may opt to pay the extra $300 to go straight up to the RTX 3090 which has twice the VRAM (24GB vs 12GB). Even 12GB of VRAM is rarely necessary for After Effects, but with features like multi-frame rendering on the horizon that will likely increase the amount of VRAM you will want on higher-end machines, skipping the RTX 3080 Ti 12GB and going with the top-of-the-line RTX 3090 24GB is not a terrible idea if you have the budget for it.

For After Effects, the RTX 3070 Ti doesn't give much of a benefit over the RTX 3070 – being only a hair faster even in our GPU stress test. It is a perfectly fine card, but if After Effects is your primary concern, you actually might as well save some money and get an RTX 3060 Ti instead of either an RTX 3070 or RTX 3070 Ti.