On September 1st, NVIDIA launched the new GeForce RTX 30 Series, touting major advancements in performance and efficiency. While gaming is almost always a major focus during these launches, professional applications like Lightroom Classic are becoming more and more important for NVIDIA's GeForce line of cards. Due to the significant improvements Adobe has made around GPU acceleration in Lightroom Classic, this is the first time we will be doing GPU-focused testing for Lightroom Classic, Because of this, we are very interested to see what kind of performance delta we will see between the various cards we will be testing. 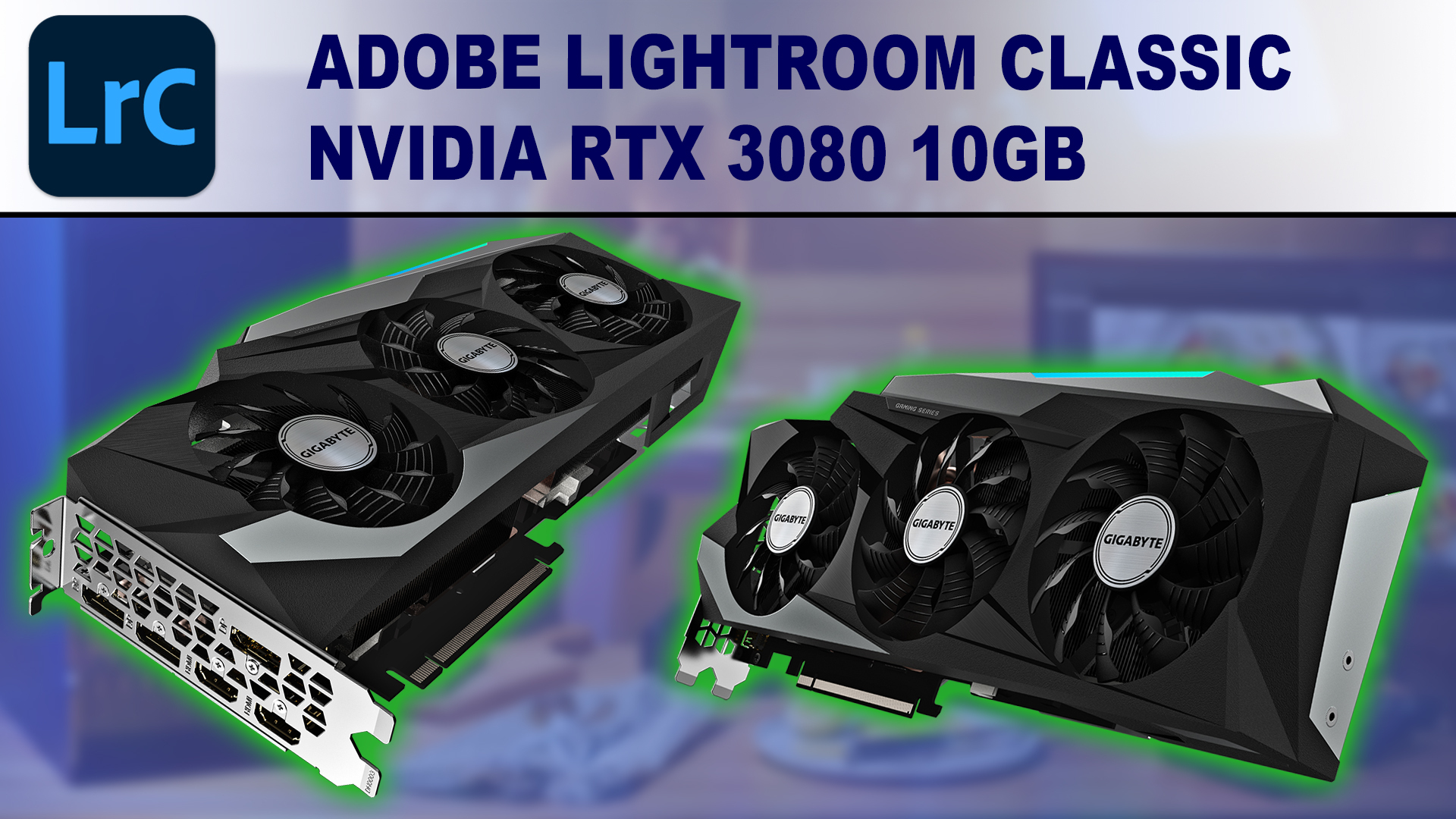 To test each GPU, we will be using the fastest platform currently available for the "Active Tasks" in Lightroom Classic – most notably the Intel Core i9 10900K. We overall recommend AMD Ryzen or Threadripper CPUs for Lightroom Classic due to their significantly higher performance for "Passive Tasks" like generating previews and exporting, but since the GPU is not significantly used for any of those tasks, we decided to use the 10900K to minimize the impact of the processor for the tasks that use the GPU. Even with this, however, be aware that there typically isn't much variation in performance between different video cards in Lightroom Classic.

While we are going to go through our analysis of the testing in the next section, we always like to provide the raw results for those that want to dig into the details. If there is a specific task that tends to be a bottleneck in your workflow, examining the raw results is going to be much more applicable than our more general analysis. 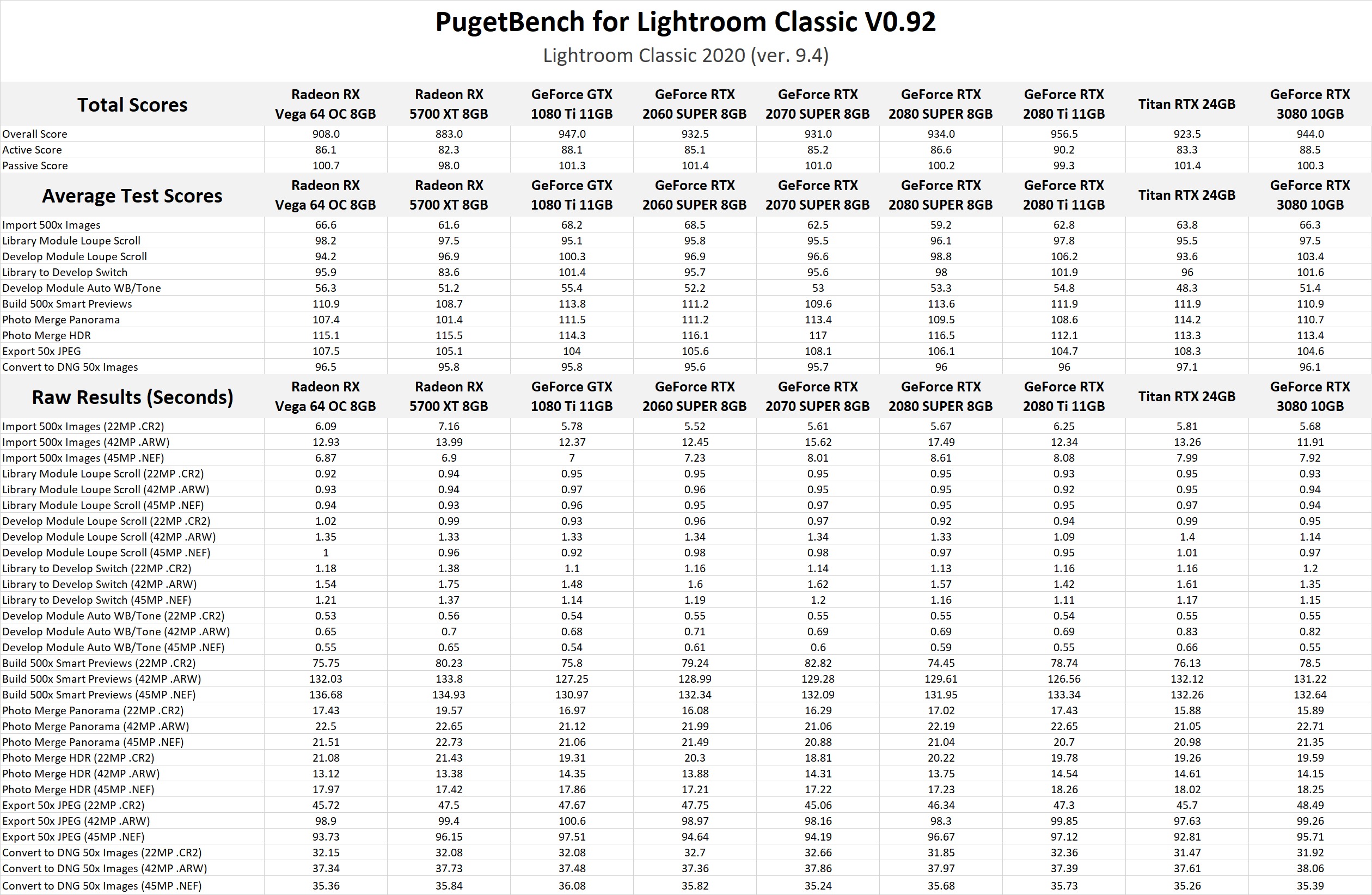 Since this is the first time we are specifically testing GPU performance in Lightroom Classic, we do not yet have a specific "GPU Score" built into our benchmark. In fact, there are several tasks that we hope to include in the future (such as slider and brush lag) that should be an even better indicator of GPU performance than the tasks we currently test.

However, we should be able to see at least some indication of relative GPU performance with our current tests. 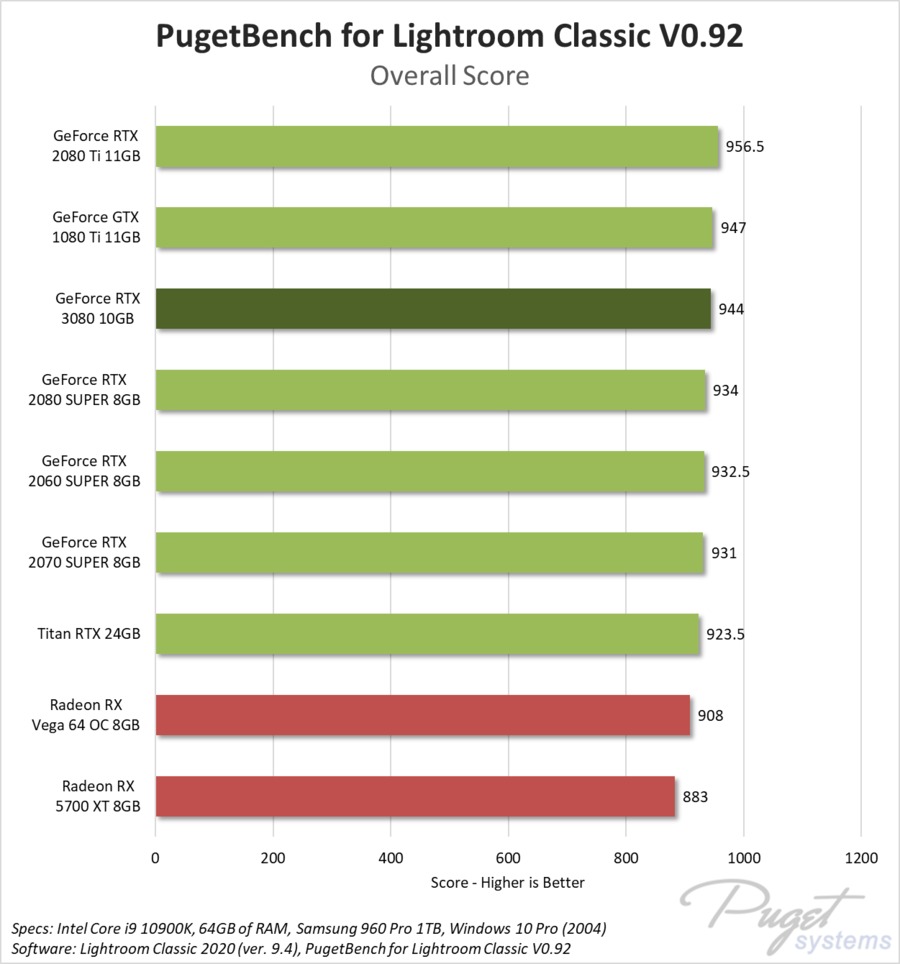 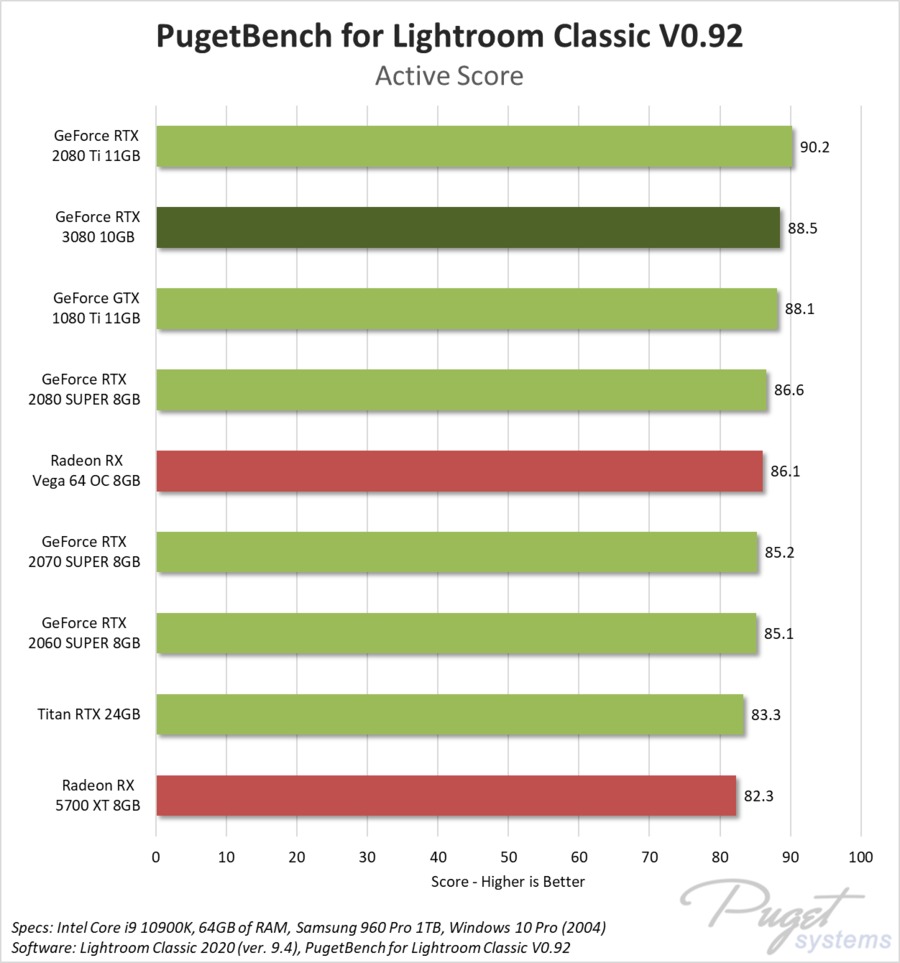 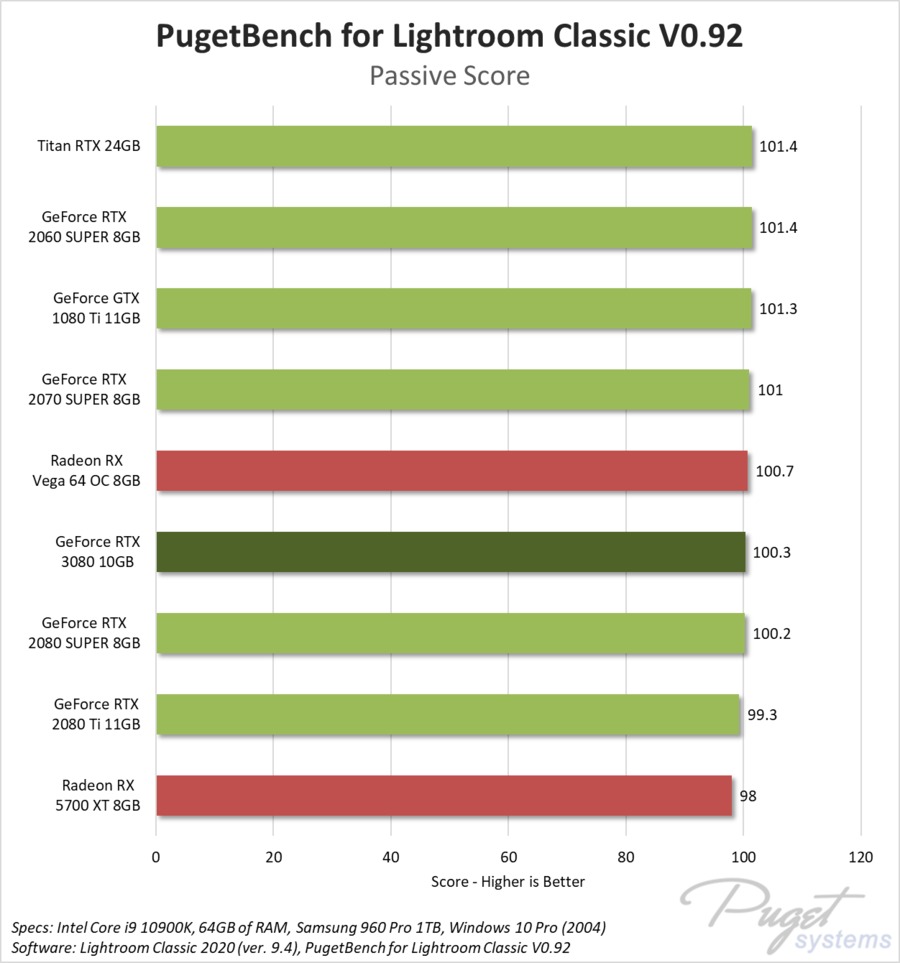 Overall, we didn't see much of a difference between the various GPUs we tested. NVIDIA is definitely a hair faster than AMD, but the performance between each NVIDIA GPU is close enough to be within the margin of error. In fact, Lightroom Classic tends to have a larger margin of error than our other benchmarks, and anything within ~5% we would consider to be effectively the same.

If you scroll to the second chart for the "Active Score", this is where we expected to see the largest variation in performance between each GPU model. Here, the new RTX 3080 technically took second place to the previous generation RTX 2080 Ti, although given how close the results are, the RTX 3080, 2080 Ti, and even the older GTX 1080 Ti are all effectively identical.

Realistically, however, only the AMD Radeon 5700XT and (oddly) the NVIDIA Titan RTX showed low enough results that you might be able to notice a difference in your day-to-day work.

How well does the NVIDIA GeForce RTX 3080 perform in Lightroom Classic?

As we mentioned earlier in the article, there are a number of tasks that we currently do not test that should leverage the GPU a bit more (such as slider/brush lag) that we hope to add to our benchmark in the future. We are unfortunately limited to what is possible via the Lightroom Classic API, but with luck, we will be able to improve our GPU-specific testing in the future. However, without significant changes to the Lightroom Classic, we don't expect there to be any reason to invest in a high-end GPU any time in the near future.

As always, keep in mind that these results are strictly for Lightroom Classic. If you have performance concerns for other applications in your workflow, we highly recommend checking out our Hardware Articles (you can filter by "Video Card") for the latest information on how a range of applications perform with the new RTX 3080 GPU, as well as with different CPUs and other hardware.