Depending on your budget, the new 11th Gen Intel Core processors range from being slightly ahead, to slightly behind AMD's current Ryzen offerings. At the i5 and i7 level, the Core i5 11600K and Core i7 11700K cost a bit less than the Ryzen 5600X and 5800X respectively but perform within a handful of percent. This, with the advantage of supporting Quick Sync, puts Intel in a small lead.

Overall, we would say that Intel has a slight lead for Premiere Pro at the sub-$400 range with the i5 11600K and i7 11700K, but the difference is so small that you could go with AMD if you wanted to without giving up too much. Above the $400 MSRP mark, however, AMD is likely going to be the better choice with their AMD Ryzen 5900X or 5950X.

Earlier this month, Intel announced their new 11th Gen Intel Core desktop processors (code-named "Rocket Lake"). These new processors are marketed as having substantially better per-core performance compared to their previous 10th Gen Core models, but the top-end model (the Core i9 11900K) has two fewer cores than the previous generation which may hamper performance in some applications.

Going into our testing, we were not quite sure how these CPUs would end up performing. Intel is boasting up to a 19% IPC performance improvement over the previous generation which should considerably improve performance in lightly threaded applications, but the maximum number of cores has been reduced from 10 to 8. We will have to see what that works out to in the real world, but in theory, it should make the 11th Gen CPUs terrific in lightly threaded applications like Photoshop and After Effects, but they may struggle in applications like Premiere Pro which can take advantage of a decent number of CPU cores. 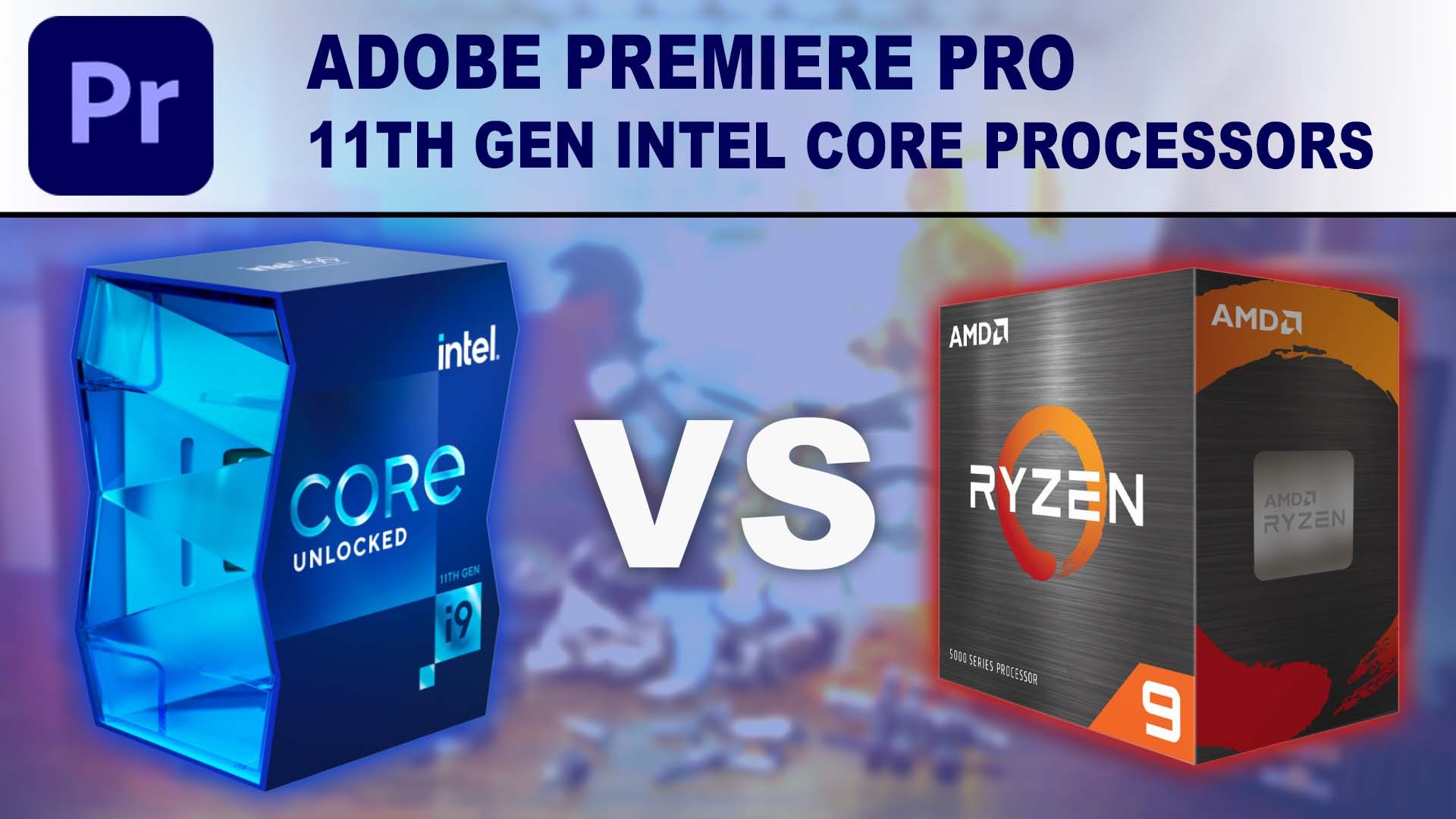 In this article, we will be examining the performance of the new Intel Core i9 11900K, i7 11700K, and i5 11600K in Premiere Pro compared to a range of CPUs including the Intel 10th Gen and AMD Ryzen 5000 Series processors. If you are interested in how these processors compare in other applications, we also have other articles for After Effects, Lightroom Classic, Photoshop, DaVinci Resolve, and several other applications available on our article listing page.

In order to see how the new 11th Gen Intel Core processors perform in Premiere Pro, we will be comparing them not only to the previous 10th Gen Intel Core CPUs but also to AMD's Ryzen 5000 series. For the test itself, we will be using our PugetBench for Premiere Pro V0.95.1 benchmark and Premiere Pro version 15.0. This benchmark version includes the ability to upload the results to our online database, so if you want to know how your own system compares, you can download and run the benchmark yourself.

Second, the power limit settings that the motherboard and CPU are using to determine what frequency to run the CPU at under load is extremely muddy with the 11th Gen CPUs. There is the Intel "stock" settings, but also what are essentially overclocked settings that allow the CPU to maintain higher turbo limits for longer periods of time in exchange for dramatically increased CPU power draw and temperatures. The idea is that these power limits allow systems that have sufficient cooling to run the CPU at faster speeds, but we still have a lot of work to do to determine exactly what power limits we feel are safe for our workstations. For now, we opted to stick with the default on the Gigabyte Z490 board we are using, which is to run with the higher power limits. This will give Intel a bit of a boost in terms of performance, however, which is worth keeping in mind when examining the results. 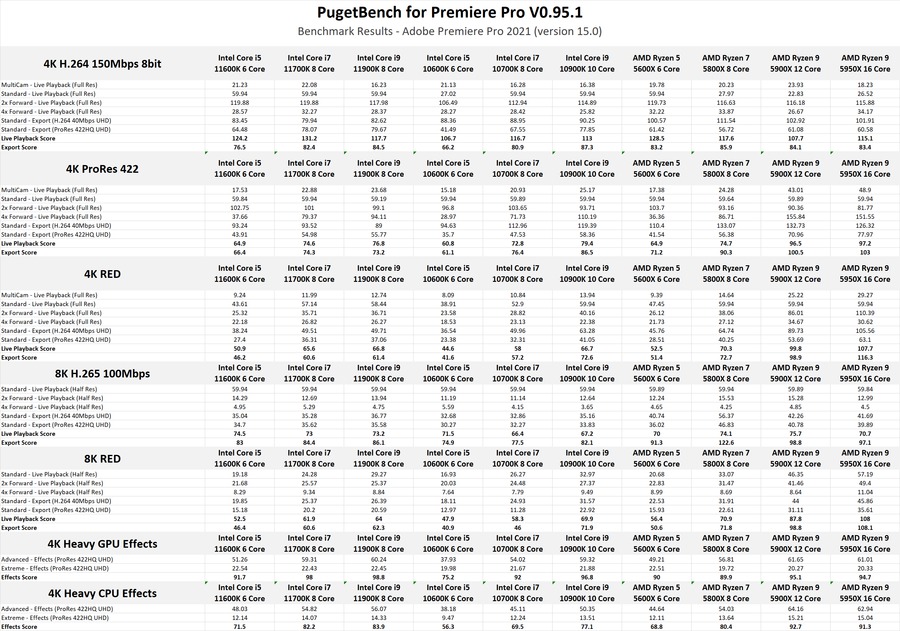 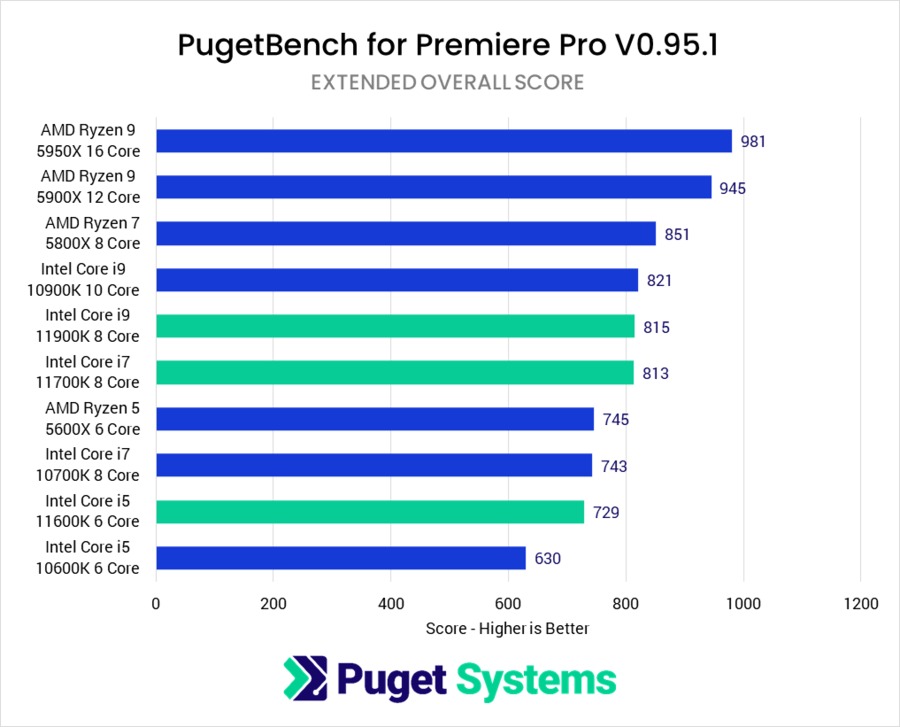 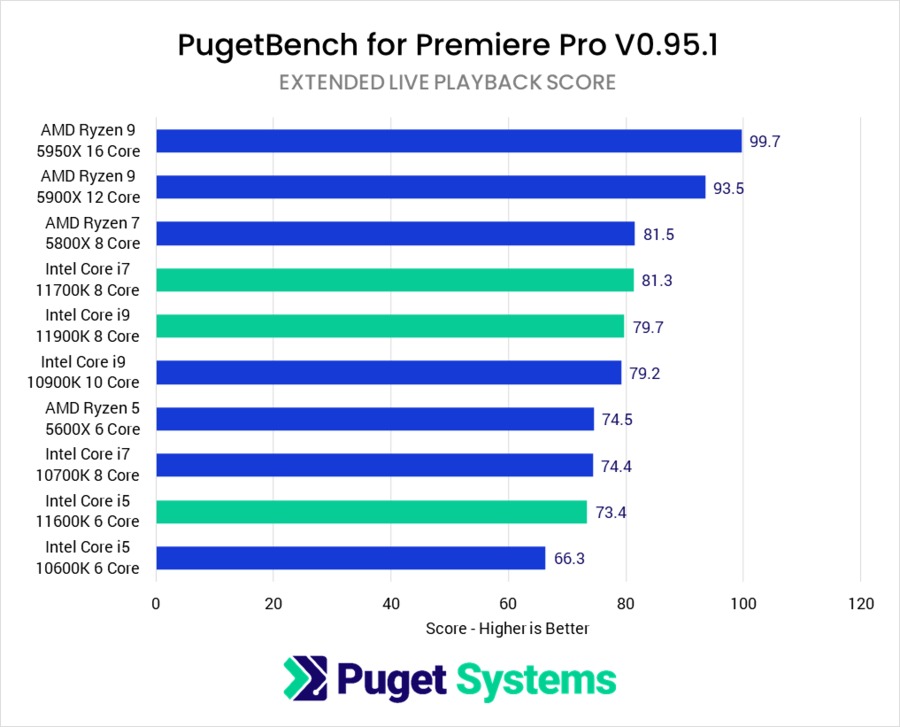 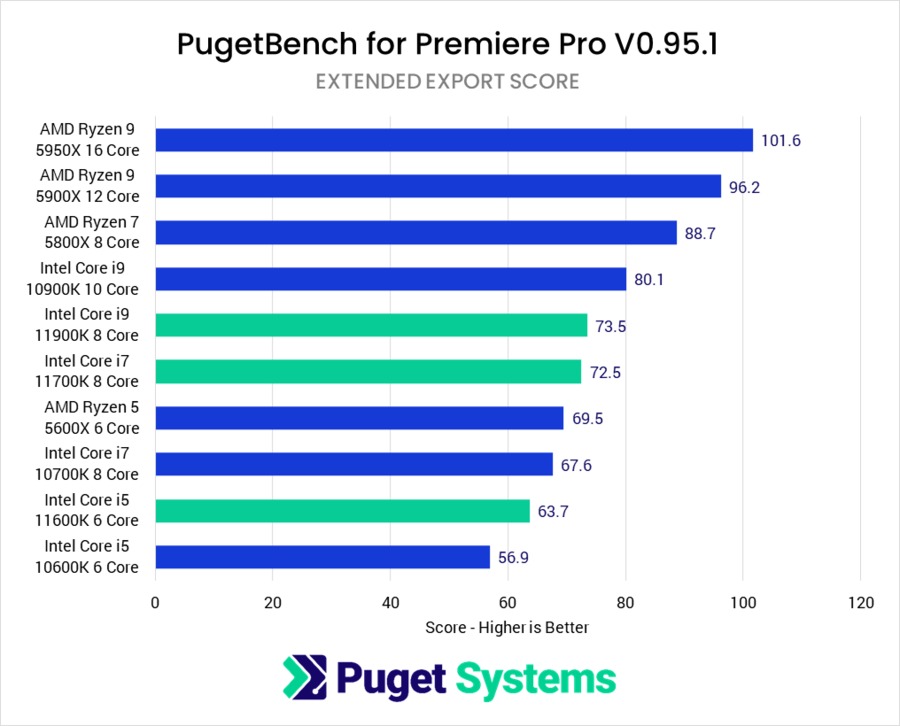 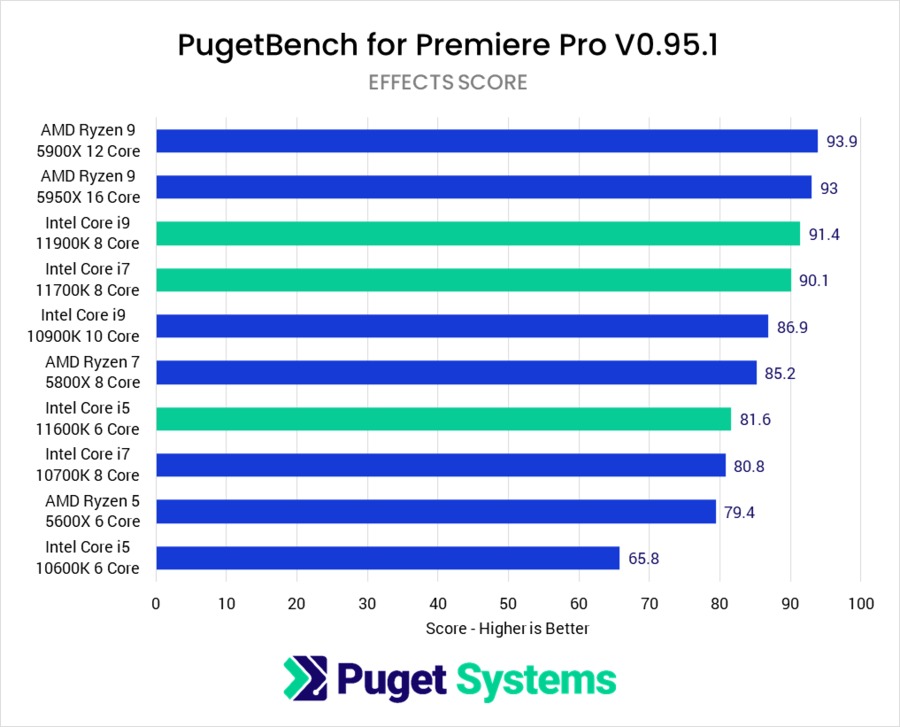 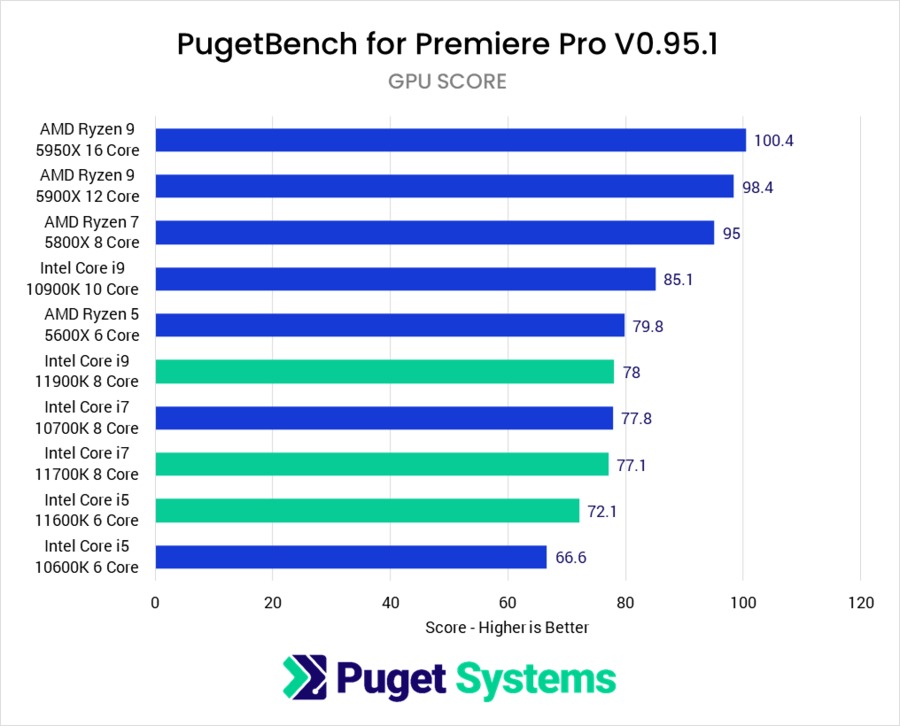 Especially for the new Core i9 11900K (which dropped from 10 cores to 8), we weren't sure how the new 11th Gen CPUs would hold up in Premiere Pro since the number of CPU cores can have a measurable impact on performance. And in fact, it certainly seems to be a limiting factor as we saw nearly identical performance between the Core i7 11700K and the Core i9 11900K.

Compared to AMD, the difference in raw performance with the new 11th Gen CPUs is often extremely small. None of the Intel and AMD CPUs line up perfectly in terms of price, but the Core i9 11900K is the roughest spot for Intel as it falls behind the slightly less expensive AMD Ryzen 5800X by a small 4%, or behind the slightly more expensive Ryzen 5900X by a larger 16%.

Going a step down to the Core i7 11700K, however, Intel comes out significantly better. Here, the i7 11700K does still fall behind the Ryzen 5800X by about 4%, but since the 11700K is 12% less expensive, that performance delta is fairly decent. Even further down the stack, the Core i5 11600K is a bit less expensive than the Ryzen 5600X, but in terms of performance, the two CPUs are right about on par with each other which puts Intel in a slight lead for those on a tight budget.

One thing that isn't shown in our benchmarks is the fact that Intel does have a slight advantage over AMD due to the fact that the Intel Core line supports Quick Sync; which Premiere Pro can use to accelerate encoding/decoding of H.264 and H.265 media. You can use an NVIDIA or AMD GPU to accomplish the same thing (which is why this doesn't show up in our benchmark results), but being able to use Quick Sync can free up your GPU to be used for other tasks like processing GPU accelerated effects. In other words, if the benchmark performance between an Intel and AMD CPU is very similar, we would give Intel the edge purely due to Quick Sync.

Overall, compared to AMD this puts Intel a bit ahead at the i5 and i7 level, and either on par or slightly behind at the i9 level. This makes the 11th Gen CPUs a bit of a mixed bag, which we can clearly see if we look at the gen-over-gen performance: 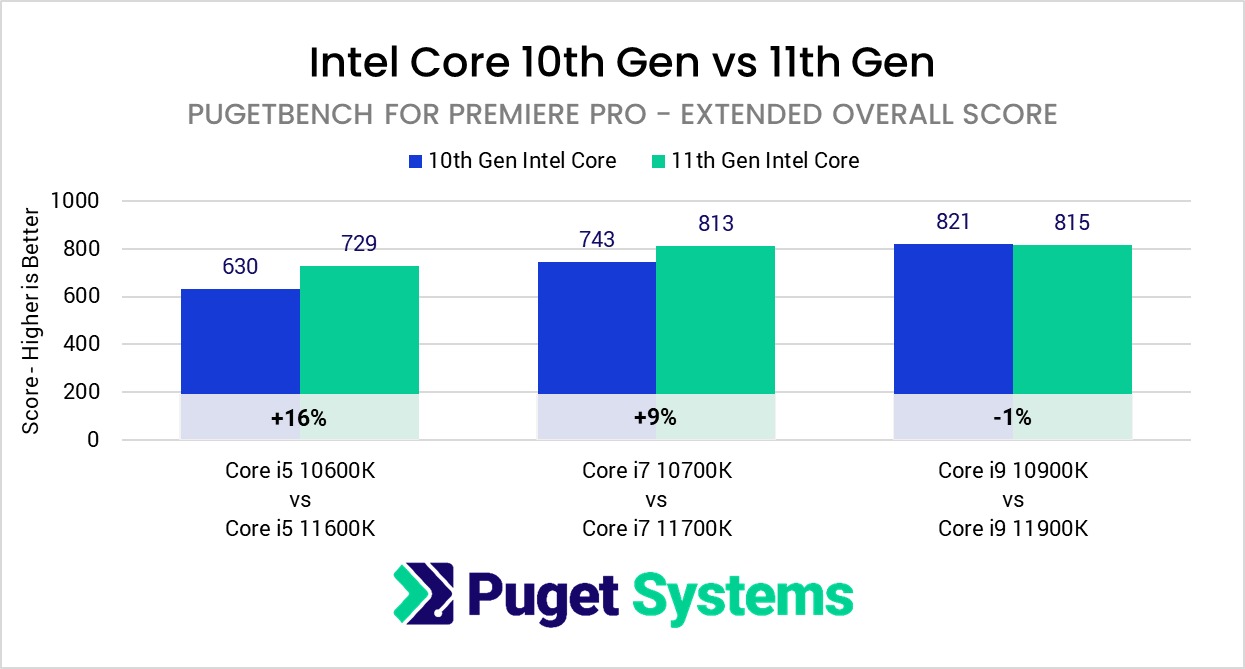 Versus the previous 10th Gen Intel Core processors, the i5 level by far saw the largest performance increase in Premiere Pro. This is great news for those on a tight budget since a 16% bump in performance is very solid for a processor that costs just a bit over $250.

The Core i7 11700K is also a good amount faster than the previous generation, although it only came in at about 9% faster than the Core i7 10700K. The big problem is the Core i9 11900K, which actually saw a slight drop in performance compared to the Core i9 10900K. This is about what we expected to see since even though the per-core performance improved with the new 11th Gen CPUs, the 11900K dropped from 10 cores to 8 – resulting in essentially identical performance in applications like Premiere Pro that can take advantage of higher CPU core counts.

Depending on your budget, the new 11th Gen Intel Core processors range from being slightly ahead, to slightly behind AMD's current Ryzen offerings. At the i5 and i7 level, the Core i5 11600K and Core i7 11700K cost a bit less than the Ryzen 5600X and 5800X respectively, but perform within a handful of percent. The Core i9 11900K, on the other hand, performs about the same as the Core i7 11700K, making it a bit more expensive and slower than the Ryzen 5800X, or 14% slower than the more expensive Ryzen 5900X.

The one thing that gives Intel an additional advantage is the fact that they support Quick Sync; which Premiere Pro can use to accelerate decoding and encoding of H.264 and H.265 media. Especially at this budget level, H.264/5 is by far the most common type of media to work with, so being able to use Quick Sync to process the footage instead of the GPU frees up your video card for other tasks like processing GPU accelerated effects. It also allows you to squeeze out a bit more export performance than our benchmarks show since you can use Quick Sync to decode H.264/5 media, while using the GPU to handle the encoding side of things (or vice-versa).

Overall, we would say that Intel has a slight lead for Premiere Pro at the sub-$400 range with the i5 11600K and i7 11700K, but the difference is so small that you could go with AMD if you wanted to without giving up too much. Above the $400 MSRP mark, however, AMD is likely going to be the better choice with their AMD Ryzen 5900X or 5950X.

Keep in mind that the benchmark results in this article are strictly for Premiere Pro and that performance will vary widely in different applications. If your workflow includes other software packages (we have similar articles for After Effects, Lightroom Classic, Photoshop, and DaVinci Resolve), you need to consider how the system will perform in those applications as well. Be sure to check our list of Hardware Articles to keep up to date on how all of these software packages – and more – perform with the latest CPUs.