Choosing the right PC for your needs can be a daunting task, but here at Puget Systems, we do our best to help you understand how different applications (like Premiere Pro) utilize the various hardware found in workstations. Not only do we have a number of on-going series of hardware articles for those that want to get deep into the details, but we also have our solutions pages that are intended to distill all our research and testing down to what matters most. Not to mention various other resources like our Youtube channel and podcast.

Today we will be tackling that question in regards to Adobe Premiere Pro - currently one of the most popular video editing applications on the market. Depending on what you are doing, Premiere Pro can utilize both the CPU and GPU to process media and effects, but other hardware choices like RAM and storage can make a big impact as well. 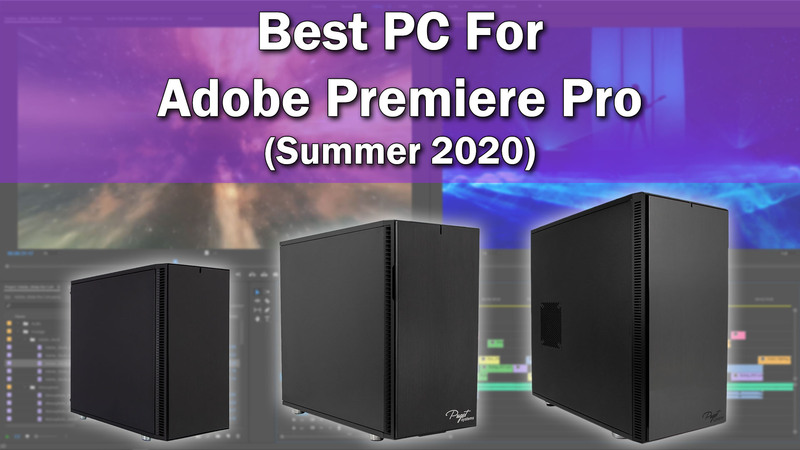 Something to note is that we are going to primarily focus on the hardware that is going to directly affect performance. Things like a Blackmagic Decklink card to drive a calibrated reference monitor, 10Gb networking, and peripherals are all incredibly important, but outside the scope of this post.

We'll start off with a solid workstation for Premiere Pro that is more than capable of handling most 4K workflows - without breaking the bank. Built around the Intel Core i9 10900K, this system is as powerful as a comparable system with an AMD Ryzen processor but allows you to utilize Intel Quicksync to accelerate decoding (primarily live playback) of H.264 and HEVC media.

On the GPU side, Premiere Pro can take advantage of the video card to process GPU-accelerated effects as well as greatly decreasing export times to H.264 and HEVC codecs when using hardware encoding. Premiere Pro current performs much better with NVIDIA GPUs over those from AMD, but there is a sharp drop in performance benefit once you get beyond a mid-range card. Because of this, we will be using the NVIDIA GeForce RTX 2060 SUPER.

To round things off, we have 64GB of RAM, a 500GB Samsung 970 EVO NVMe primary drive (for the OS and applications), and a 1TB Samsung 860 EVO SSD for your project files.

All told, this system should run you just over $3,000 and score around 780 points on the Standard preset of our PugetBench for Premiere Pro benchmark which should be enough to handle most non-RAW 4K workflows.

Stepping up a bit in terms of performance, the Intel Core i9 10980XE 18 core offers a much higher core count (and raw power) than the Core i9 10900K 10 core, while maintaining terrific support for Intel Thunderbolt. If you do not need Thunderbolt and are looking to save a bit of money, however, you could go with the AMD Ryzen 9 3950X instead as it performs almost exactly the same as the Core i9 10980XE in Premiere Pro at a slightly lower price.

For the GPU, we will be moving up to the NVIDIA GeForce RTX 2080 SUPER. This card can give up to a nice 20% performance bump over the RTX 2060 SUPER when processing GPU accelerated effects and exporting to H.264/HEVC.

On the RAM and storage side of things, we are upgrading to 128GB of RAM and increasing the storage size of the secondary drive to 2TB in order to handle the higher resolution and size of 6K media.

Depending on current pricing, this configuration should cost right around $5,000, around 13% faster than the "Good" configuration (~880 points vs 780 in our Premiere Pro benchmark), and be able to handle most RAW and 6K workflows.

For the best possible performance in Premiere Pro, we will be using the AMD Threadripper 3970X 32 core processor. AMD does have a model with even more cores (the Threadripper 3990X 64 core), but that model tends to actually be slower in applications like Premiere Pro. So, in this case, we do not want to simply go with the most expensive option and instead will be using the less expensive and faster Threadripper 3970X. The one downside to this platform is that Thunderbolt is not as established as it is on Intel-based platforms, so if Thunderbolt support is a requirement, you may opt to use the "better" configuration even if you have the budget to go with AMD Threadripper.

We will continue to stick with NVIDIA for the GPU, and upgrade to the GeForce RTX 2080 Ti 11GB as it is among the fastest model currently available for Premiere Pro. However, if you also use other applications like DaVinci Resolve and will be working with 8K media, you may want to invest in the NVIDIA Titan RTX 24GB as Resolve will often require the higher VRAM capacity available from that card.

The system RAM capacity stays at 128GB as that should be more than enough for almost any Premiere Pro workflow. For storage, however, we will be upgrading the project drive to a 2TB Samsung 970 EVO NVMe for the additional capacity and speed, as well as adding a dedicated 512GB Samsung 870 Pro SSD for cache and scratch files. How much storage is enough varies greatly depending on each person's workflow, so depending on how much footage you work with (and its bitrate), you may consider adding even more storage. Alternatively, if you will be using network storage then including a 10 Gigabit PCI-E networking card is a good idea.

All told, this configuration should come in at a hair over $7,000 and be roughly 20% faster overall than the "Better" configuration (1040 points vs 880 points) - although be aware that most of that is in increased export performance rather than live playback. The extra performance makes this among the absolute fastest workstation currently possible for Premiere Pro.

If you want to know more about how Premiere Pro performs with various hardware and our justifications for these recommendations, we have a number of resources available. For those that want just a bit more information, we recommend visiting the "Hardware Recommendations" section of our Premiere Pro Solutions page. If you really want to dig into the numbers behind the data, we also have an on-going series of hardware articles that are regularly updated, as well as our public database of PugetBench for Premiere Pro benchmark results.