The rendering scores increased by roughly 15% on the AMD Threadripper PRO 5000 WX-Series. This makes an already great CPU for rendering even better. While single-threaded tasks aren’t measured in this benchmark, we have seen as much as 19% improvement in this area. Combining these results, AMD’s new Threadripper Pro 5000 series CPUs make for a great option for anyone looking for ultimate performance in Blender.

Blender is a 3d modeling package that we have been keeping an eye on for quite a while, so what better time to begin benchmarking that the release of a new CPU. Blender utilizes hardware much the same way as any other 3d modeling package. Modeling and animation tasks are mostly single-threaded. It does have built-in rendering capabilities, and while GPU rendering is much more performant, CPU is still a viable option. When looking at CPU rendering, the number of cores is the biggest factor, followed by how fast each of those cores is while all cores are working at 100%. AMD already holds the lead for the number of cores available in a CPU, so it will be interesting to see if their per-core improvements make a difference for Blender. 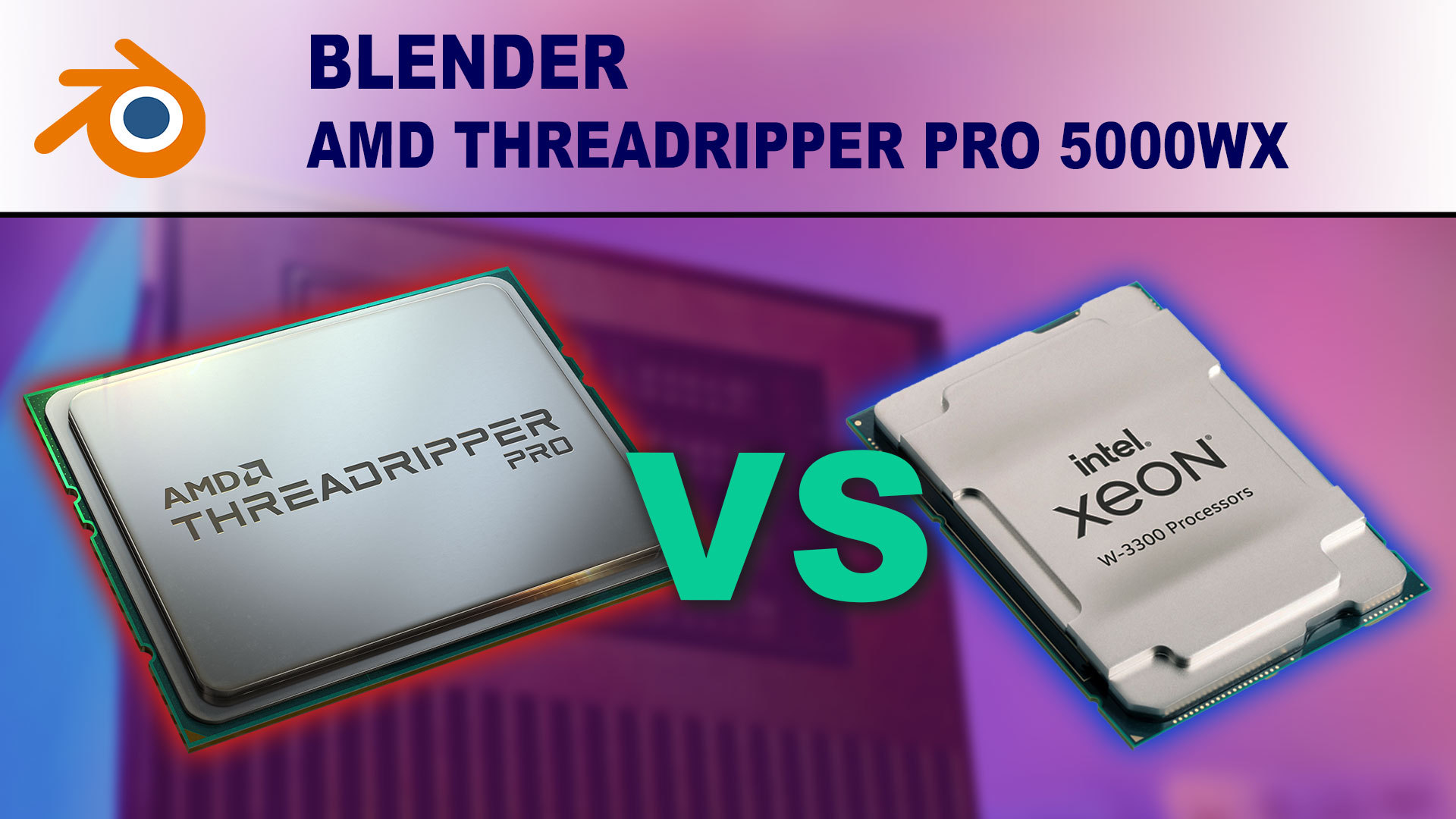 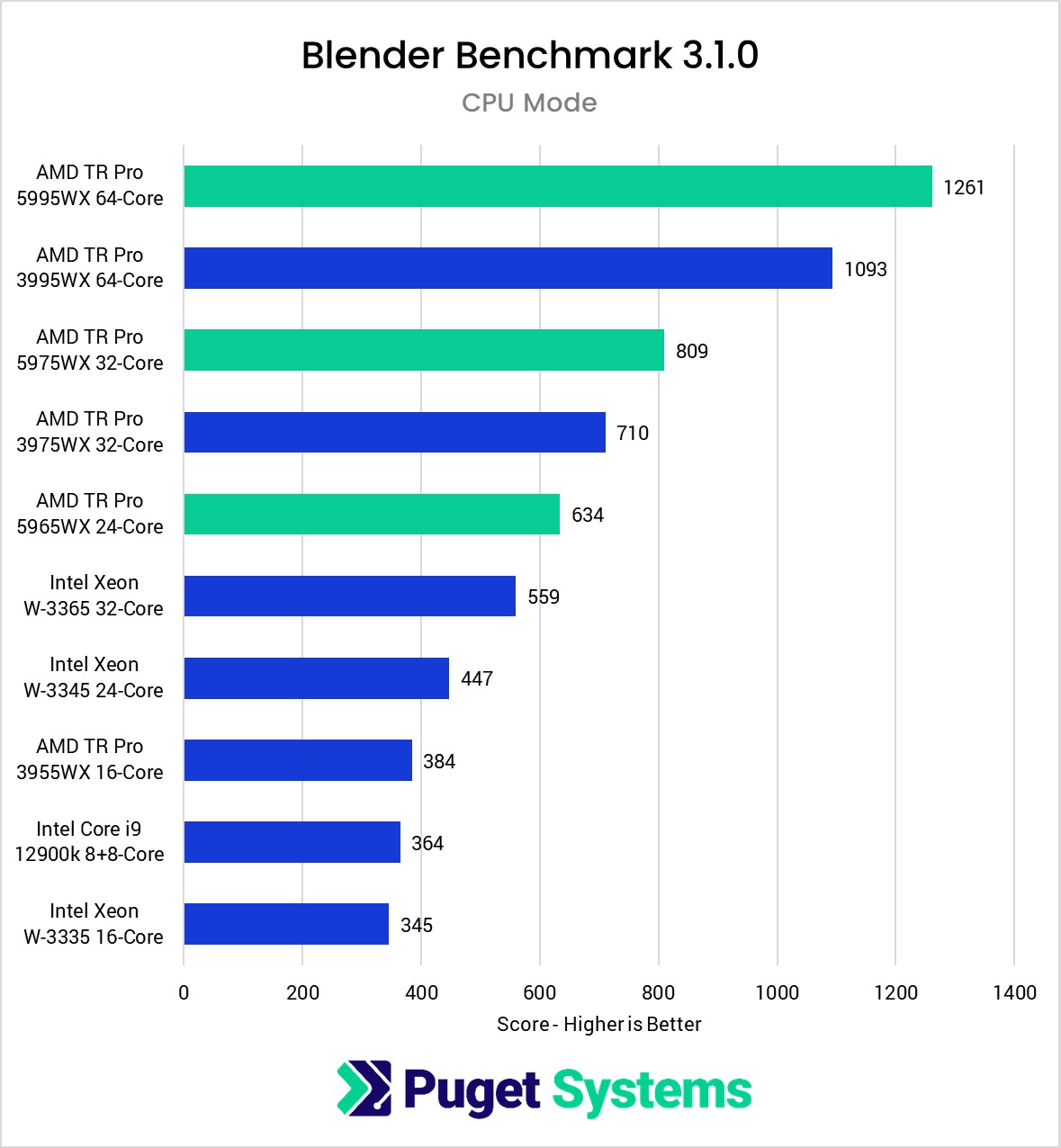 The results speak for themselves. The 64-core Threadripper Pro 5995WX takes the top spot with a 15% improvement over the Threadripper Pro 3995WX. The improved IPC (Instructions Per Clock) and increased Boost Clock really extend what this large amount of cores can do.

The 32-core Threadripper PRO 5975WX also shows a 15% improvement in rendering performance over the previous generation. This isn’t quite as big of a difference as we saw in V-Ray but is comparable to Cinema 4D. More impressive is this results in a 45% lead over Intel’s 32-core offering, the Xeon W-3365.

The 24-core Threadripper PRO 5965WX outperforms Intel’s 24-core Xeon W-3345 by a massive 42%. The Threadripper PRO 3000 WX-Series did not offer a 24-core CPU, however, this new CPU is 65% faster than the 16-core Threadripper Pro 3955WX with only 50% more core. When it comes to CPU rendering performance, there really isn’t anything close to what AMD is providing.

This benchmark doesn’t cover single-core performance, which is important for modeling and animation. We can look at the Cinebench single-core results from the Cinema 4D article to get an idea of what Blender users might experience. We see a large uplift in performance for this generation. Unlike the multi-core tests, Single core tests tend to be very similar between processor families. In this case, all of the Threadripper PRO 5000 WX-Series have the same boost speed of 4.5GHz. While this is only a .2-.5 GHz (or 5-7%) increase in clock speed, that combined with the higher IPC (instructions per clock) have resulted in a 15-19% increase in performance over the Threadripper Pro 3000 WX-Series, and roughly 20% faster than the Intel Xeon W-3000 series. This puts them within the range of AMD’s Ryzen 5000 series desktop CPUs, though still a bit behind Intel’s new 12th gen consumer chips (included in the chart for reference). Often times there is a tradeoff between single-core and multi-core performance, with those that use GPU Rendering, or a dedicated render farm opting for single core performance. AMD Threadripper PRO 5000 WX-Series really helps those that want top rendering performance without sacrificing too much on their modeling/animation workflows.

For Blender, some tasks want a few fast cores, while others want lots of cores. The new Threadripper PRO 5000WX-Series CPUs from AMD didn’t increase the number of cores available but did make them much faster. Rendering scores increased by roughly 15%. This makes an already great CPU for rendering even better. While single-threaded tasks aren’t measured in this benchmark, we have seen as much as 19% improvement in this area. Combining these results, AMD’s new Threadripper PRO 5000WX-Series CPUs make for a great option for anyone looking for ultimate performance in Blender.

Keep in mind that the benchmark results in this article are strictly for Blender and that performance will vary widely in different applications. If your workflow includes other software packages (we have similar articles for a number of other applications that can be found in our AMD Threadripper PRO 5000 WX-Series Review Roundup article), you need to consider how the system will perform in those applications as well. Be sure to check our list of Hardware Articles to keep up to date on how all of these software packages – and more – perform with the latest CPUs.