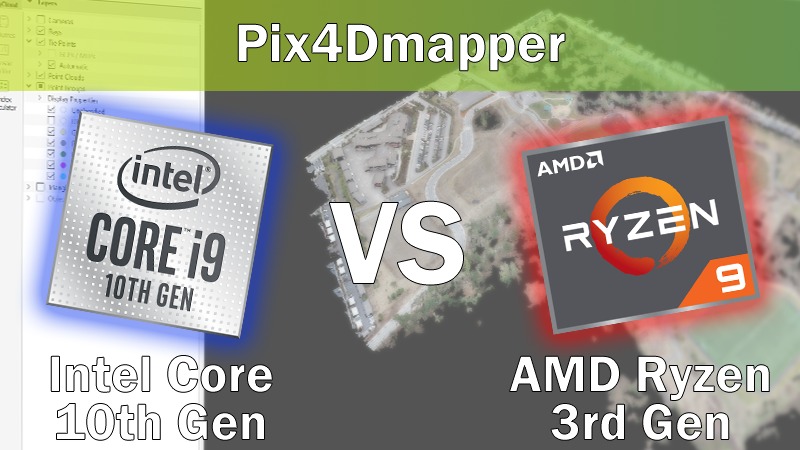 For this article, we are looking at how the new Intel 10th Gen Core processors compare to other currently-available models and the preceding 9th-gen Core series. The focus is on photogrammetry processing in Pix4D, for which we have developed internal benchmarks here in our lab. More info about those tools and how we use them are available in the Test Methodology section.

For benchmarking photogrammetry applications we now have four image sets that we own the rights to, covering both smaller and larger size Model and Map projects. All of these image sets are available in our public Pix4D benchmarks, split up to allow quick or extended tests, which you can download and run if you want to compare your system's performance to what we measured for this article.

For those who want to dig into the weeds of how these CPUs performed in different processing steps, here is a full table of the results:

In Pix4D, the new 10th Gen Intel Core processors are faster than AMD's Ryzen models at similar price points. The top-end Core i9 10900K rivals or beats the more expensive Ryzen 9 3950X in three of our four tests, though it doesn't keep up as well on larger projects.

However, both of those families of processors fall behind AMD's higher core count Threadripper models in most of our benchmark tests. Particularly when working with maps these chips perform the best, with the 32-core Threadripper 3970X being the fastest CPU on average in Pix4D - and the more affordable 24-core TR 3960X not far behind. Intel's Core X series isn't competitive here, unfortunately.

Intel's new 10th Gen Core processors, especially the Core i9 10900K and i7 10700K, are faster per dollar than AMD's Ryzen 3rd Gen chips in Pix4D. However, that statement is somewhat misleading because there is a more expensive Ryzen model that outperforms them, and even higher-end processors which outpace both the Core and Ryzen lines. For the best performance in Pix4D, the AMD Threadripper 3970X and 3960X are clear winners.