With the recent launch of AMD's Bulldozer, there are plenty of articles available on the web that go into great detail over the different architecture changes. Puget Systems also released a short Technology Primer article which can be viewed here. In this article, we will be focusing on the thermal and performance results of the AMD FX-8150 CPU.

Since numbers alone are not very useful without a comparison, we will be comparing this CPU to an Intel Core i5 2500K, which is roughly the same price as the AMD FX-8150. It is unfair to try to match the frequency between AMD and Intel processors since the internal structure is so different, which is why we are going for a match on price rather than specs.


As you can see, based on specs alone the AMD FX-8150 should have much higher performance than the Intel Core i5 2500K. We've learned in the past however that the manufacture specifications do not always tell the whole story. For that we will need to run and compare benchmarks from both systems.

As stated before, we will be using both an AMD FX as well as an Intel Core i5 system for testing. For the thermal testing, we will only be testing the AMD FX-8150 system since thermal results do not need much comparisons. Specs for our test systems are below:

The first thing we want to find out how hot the AMD FX-8150 runs with four different coolers shown below. Since the thermal output is a high 125W, we want to be sure we are not hitting a thermal ceiling during our benchmarks due to using an inadequate cooler. To test hot how this new CPU runs, we recorded the temperature of the CPU and motherboard chipset at both idle and load. Since we had the data, we also included the video card temperatures as well.


To fully load the system, we ran a combination of Prime95 and Furmark until the temperatures stabilized (roughly 10 minutes). This will cause higher temperatures than any normal user is likely to see, but should give us a clear worse-case scenario for cooling. We would normally use CoreTemp to record the CPU temperatures, but we were unable to get reliable results using it (likely the program simply hasn't been updated yet to include Bulldozer support) so we instead used Asus PC Probe to monitor the CPU temperature and fan RPM. Like normal, GPU-Z was used to log the video card temperatures.

At idle, we see that none of the coolers have any problems cooling this CPU. The stock cooler did much better than expected, although it was the worst at providing cooling for the chipset. From a CPU temperature standpoint, the Gelid Tranquillo Rev2 is the best performer, and the Scythe Katana the worst. Idle results can at times be misleading however, so lets take a look at the more important load temperatures:

Once under full load, we see that the stock cooler is now the worst cooler, coming in at the bottom of each of the three temperature points. The Scythe Katana is only marginally better, but the Gelid Tranquillo Rev2 and Coolit Eco II A.L.C. both have very nice CPU temperature results at 56º C. It's worth noting however that all four of our coolers are within our comfortable AMD temperature threshold of 65º C.

While these results are great for knowing how well each cooler does for the FX-8150, it would be good to know how much headroom each cooler has so that we can deduce how well they would perform if a hotter AMD CPU ever gets released. For that reason, we also recorded the fan RPMs for each of our coolers and graphed the data as a percentage of the fan's maximum RPM. This will give us a clear look at exactly how hard the fans are having to work to keep the CPU cool.

Starting with the Stock cooler, there is absolutely no headroom available since at load the fan is already running at 100%. This is on the fastest AMD FX CPU available at the moment, so this is not to say that the Stock cooler will have any problems cooling an AMD FX CPU, just that it is not the most efficient. The high RPM also means that the stock cooler should not be considered to be at all quiet. The rest of the coolers have plenty of headroom, with about 20% on the Scythe Katana and about 30% remaining on the Coolit ECO II A.L.C. and Gelid Tranquillo Rev2.

For our first benchmark, we used Lame 3.98.2 to encode a 60MB .wav file into a .mp3. Lame is not multi-threaded, so it is unable to take advantage of all eight cores present on the FX-8150. As you can see from the graph, the Intel i5 2500K is nearly a third faster on this benchmark.

Windows Media Encoder is a free encoder from Microsoft and also does not support multi-threading. Just like with Lame, we see that the Intel i5 2500K does much better than the FX-8150. 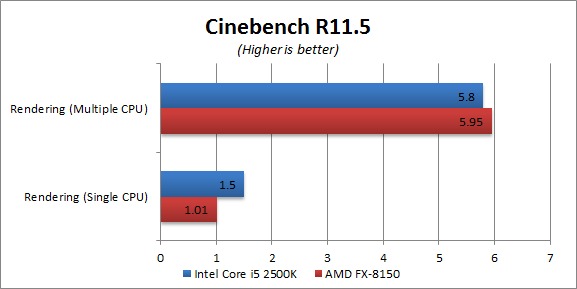 Cinebench is a popular 3d rendering benchmark that runs two separate rendering tests; one with only a single core and one using all available cores. As we have seen in the previous benchmarks, the FX-8150 does poorly when limited to a single core, yet pulls ahead when it can utilize all eight of its cores.

Truecrypt is a multi-threaded encryption software that has it's own built-in benchmark utility. Using the AES encryption method (one of the fastest encryption methods today), the FX-8150 outperforms the Intel i5 2500K by .3 GB/s. 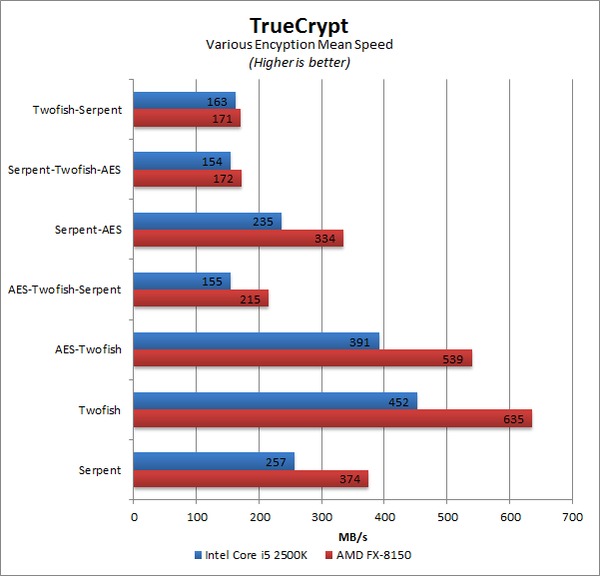 The various other encryption methods available with TrueCrypt mirror the AES encryption benchmark with the FX-8150 outperforming the Intel i5-2500K in all areas. 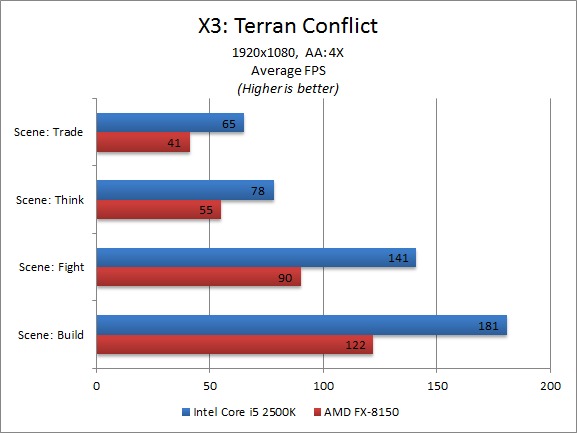 Our first game benchmark - X3: Terran Conflict - is a bit dated now, as it was released in late 2008. It is not at all uncommon for consumers to continue playing games that are more than a few years old however, so we feel that it is still a relevant benchmark. Surprisingly, even with the same video card and RAM, the Intel i5 2500K consistently outperforms the FX-8150 by a healthy margin in each benchmark scene. 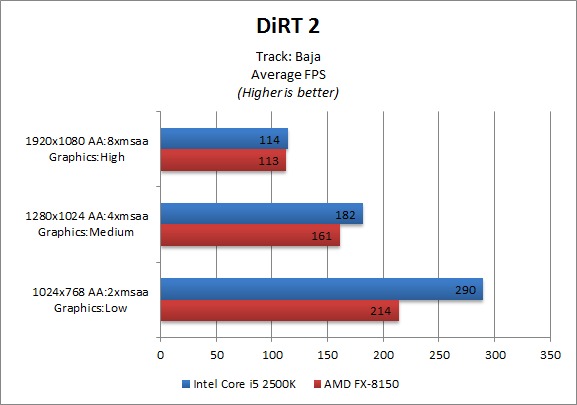 DiRT 2 is a bit newer of a benchmark that was released in December 2009. At lower resolutions and settings, the Intel i5 2500K again leads, but with the settings turned up the game becomes more GPU limited so the speed of the CPU is not as important. Once up to full resolution with all the graphics turned up, the performance with both CPU's was identical. 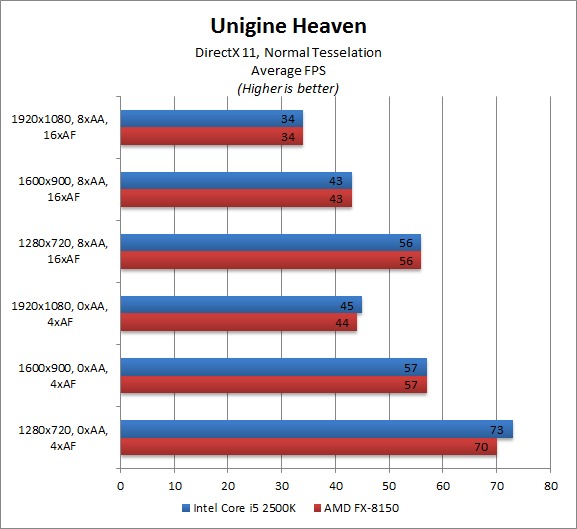 Unigine Heaven is a DX11 benchmark that from our testing shows to be very GPU limited. In fact, it is so GPU limited that there is really no winner for this benchmark.

With all this data, what can we conclude about the performance of the FX-8150? Simply put, this CPU does very well with applications that can utilize all of its eight cores, but is a bit of an underperformer when it is limited to only one or two cores. From a thermal standpoint, this CPU runs much cooler than we would expect from a 125W CPU, although we would recommend upgrading from the stock heatsink to at minimum a Scythe Katana.

So what it comes down to is that you cannot call either of the similarly priced AMD FX-8150 or Intel Core i5 2500K "better" than the other in all instances. For most users, the Intel Core i5 2500K would be the better value, although users who heavily use multi-threaded applications (such as 3d modeling) could benefit from the additional cores available on the FX-8150. Future applications should be able to use more and more cores, so for those looking to future-proof their system, the FX-8150 might be attractive as well.

From a gaming standpoint, most modern games are heavily GPU limited, so as long as you have a CPU that can keep up with your video card, you should not be able to see much of a difference from either CPU. So for gamers, either CPU will give you roughly the same performance on modern games.