With the recent launch of Sandy Bridge-E and the new 2011 socket, we were very eager to test and qualify these new CPU's. We were not able to get our hands on the lowest-end Sandy Bridge-E CPU since it is not set for launch until Q1 of 2012, but we did manage to procure the new Intel Core i7 3960X and 3930K CPU's. In this article we will be focusing on the thermal output and performance of these new CPU's, so if you are interested in the details of the Sandy Bridge-E architecture as a whole, we recommend reading our Sandy Bridge-E Technology Primer article.

We will be running our performance benchmarks on both of the new Sandy Bridge-E CPU's, along with three other CPU's - two from Intel and one from AMD. We will be using the highest end Core i7 CPU from the previous generation (Intel Core i7 990X), a very popular Sandy Bridge CPU (Intel Core i5 2500K) and the highest end Bulldozer CPU from AMD (AMD FX-8150). So before getting into our testing results let's take a quick look at the specs for each CPU.

In terms of cores, the new Sandy Bride-E CPU's both have 6 cores, matching the Intel 990X. The Intel 2500K only has 4 cores, while the AMD FX-8150 has 8 cores. AMD's FX-8150 certainly has an advantage in terms of cores, but our recent qualification of the FX-8150 showed us that the number of cores is currently only a factor in a limited number of applications.

Lastly, the L3 cache (also known as Smart Cache on Intel CPU's) gets a bump up to a maximum of 15MB, putting both of the new CPU's ahead or even with the other test CPU's.

Full system specs for each of our test systems is below:


We will be using all five systems for our performance benchmark comparisons, but the first thing we will be doing is to the check the thermal performance of the Intel 3960X and 3930K. We want to be sure that we do not have any thermal issues that may cause the test system to run slower than it would otherwise. For the thermal testing, we will only be using the new Sandby Bridge-E CPU's.

At the time of this article, we did not have access to many coolers that were compatible with the new 2011 socket so our testing will be somewhat limited. Intel is offering both a closed-loop liquid cooling solution (DRX-B) along with a standard air cooling heatsink (DRA-A) so we will be using both for our testing. We were also provided with adapter components from Coolit for the Coolit Eco II liquid cooling solution, so we will be using that cooler as well. For more information on these coolers - including noise and performance comparisons to other coolers - check out our qualification article for the DRX-B liquid cooler.


To fully load the system, we will run a combination of Prime95 and Furmark until the temperatures stabilize (roughly 10 minutes) with CoreTemp being used to log the temperatures. This will cause higher temperatures than any normal user is likely to see, but should give us a clear worse-case scenario for cooling. 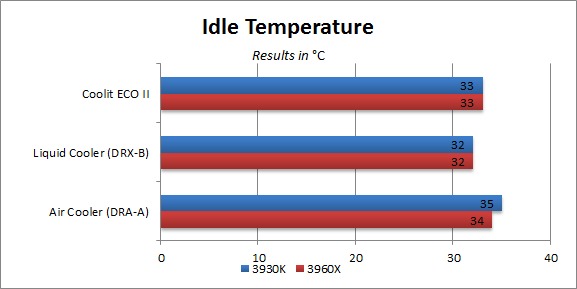 At idle, there is not much to talk about as the single degree difference between the DRX-B and the Coolit Eco II can be chalked up to normal testing variations. The DRA-A runs a bit hotter than the other two coolers, although this is expected as it is only a standard heatsink and not a closed-loop liquid cooling solution. 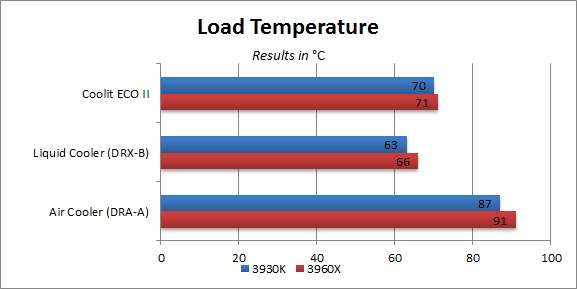 We are rarely happy with stock coolers when it comes to high wattage CPU's, and the DRA-A combined with either Sandy Bridge-E CPU is no different. In the sysetms we build, we like to keep the CPU below 80 °C in order to ensure the CPU will not run into heat issues. As you can see from the graph, we are well above that threshold with the DRA-A cooler.

With the Intel DRX-B liquid cooling solution, we see much better temperatures with a high of only 66 °C on the high-end Intel Core i7 3960X. The Coolit Eco II fares a bit worse, although it is still well within the 80 °C threshold. While we are not heavily addressing cooler noise in this article, it is worth noting that the Coolit Eco II is much quieter than the Intel liquid cooler. For more information on the noise difference, we again recommend checking out noise section of the Intel DRX-B liquid cooler qualification article. 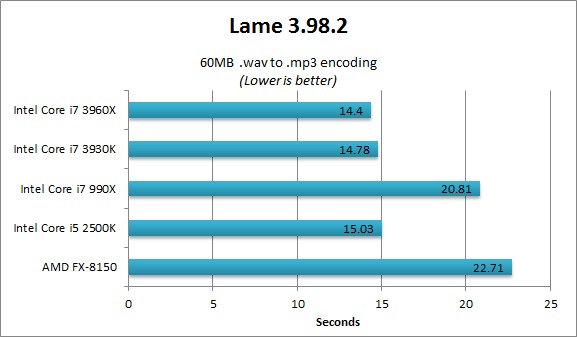 Lame 3.98.2 is a single-threaded audio encoding utility which means that the different number of cores between our test CPU's will not influence the results. We see that the Intel i7 3960X and 3930K receive very close to the same score, and both do much better than either the Intel i7 990X or the AMD FX-8150. The Intel 2500K does a good job holding its own considering that it is a more affordable CPU. 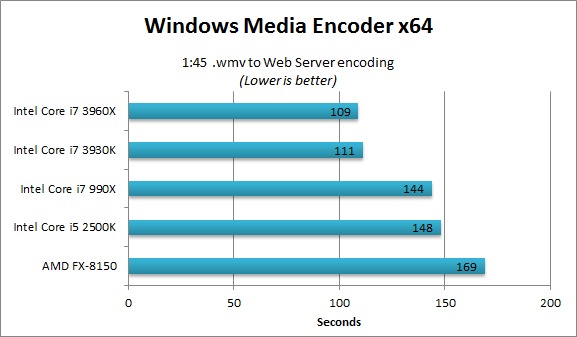 Windows Media Encoder is another single-threaded encoding program that is available for free from Microsoft. In this benchmark, we see a very nice improvement in encoding times with the Intel i7 3960X and 3930K with a 30% faster encoding time than the next fastest CPU (the Intel 990X). Interestingly, the scores across the Intel CPU's are in the same order as the maximum turbo boost, indicating that this benchmark is heavily frequency dependant. We know that is not 100% the case however since the AMD FX-8150 is at the bottom of this benchmark. This is likely simply because this encoder is more heavily optimized for Intel CPU's rather than AMD CPU's. 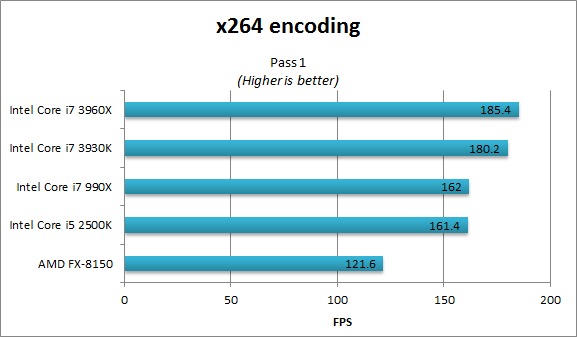 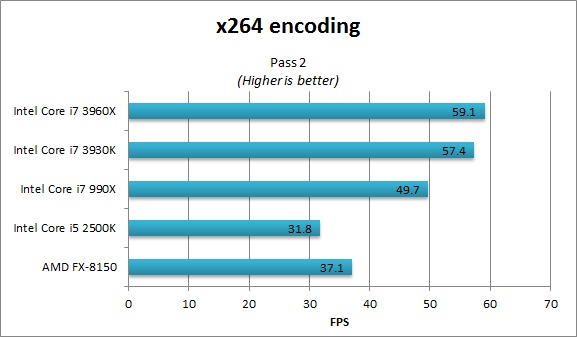 Unlike the previous 2 encoding benchmarks, the x264 encoding benchmark is multi-threaded so we will finally be able to see how the number of cores affects performance. However, the first pass is only lightly threaded, which is why we see the Intel i5 2500K still managing to hold its own. On the second, fully threaded pass, the AMD FX-8150 overtakes the Intel i5 2500K, although none of the CPU's are able to come close to the Intel i7 3960X and 3930K. For the first time, we also see a difference between the Intel i7 3960X and 3930K with the 3960X pulling ahead by a couple of FPS. 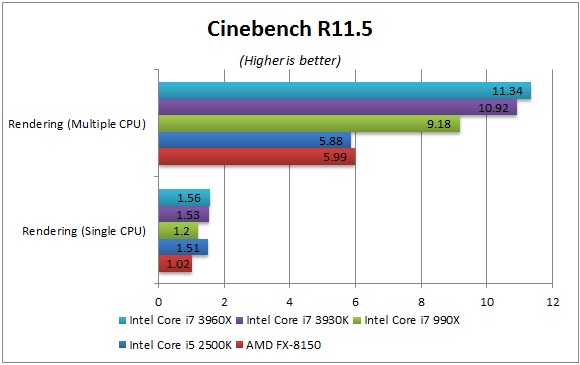 Cinebench is a popular 3d rendering benchmark that runs two separate rendering tests; one with only a single core and one using all available cores. The single CPU benchmark is almost identical to the Lame benchmark with the Intel i7 3960X, 3930K and Intel i5 2500K performing about the same while the Intel i7 990X and AMD FX-8150 are slightly behind. The multiple CPU benchmark really shows the performance gains of the new Sandy Bridge-E architecture with scores much higher than our other test CPU's 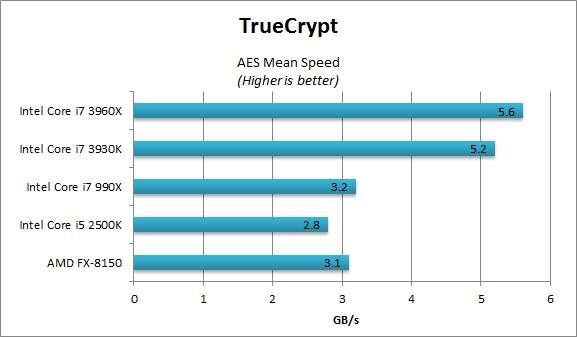 Truecrypt is a multi-threaded encryption software that has its own built-in benchmark utility. Using the AES encryption method (one of the most popular encryption methods today), we again see a huge performance increase with the new Sandy Bridge-E CPU's. 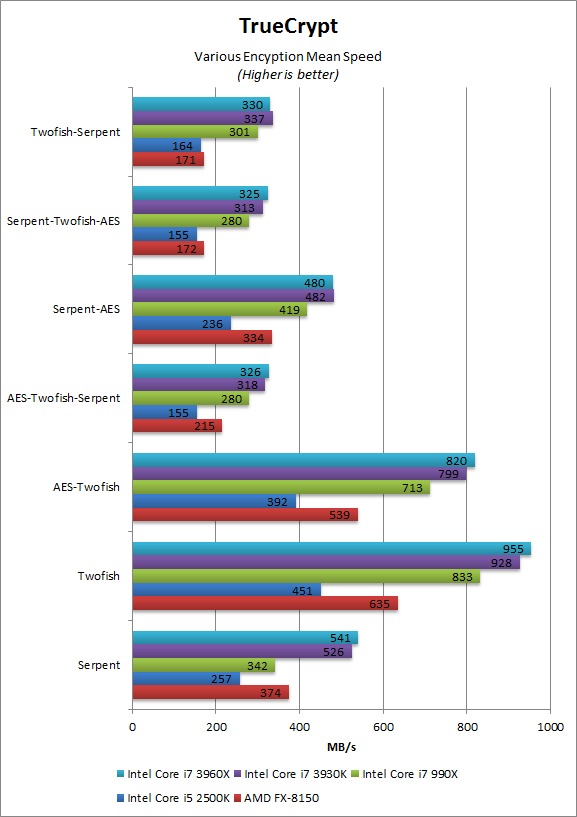 TrueCrypt also supports various other encryption methods which are shown in this benchmark. The results very closely mirror the AES encryption benchmark although some of the increases are not pronounced. 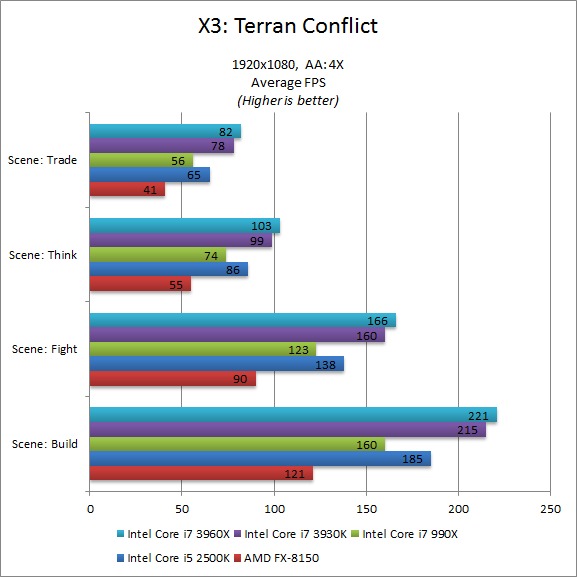 Our first game benchmark - X3: Terran Conflict - is a bit dated as it was released in late 2008. It is not at all uncommon for consumers to continue playing games that are more than a few years old however, so we feel that it is still a relevant benchmark. Even with the same video card and RAM, we see notably better performance with the Sandy Bride-E CPU's across the board. 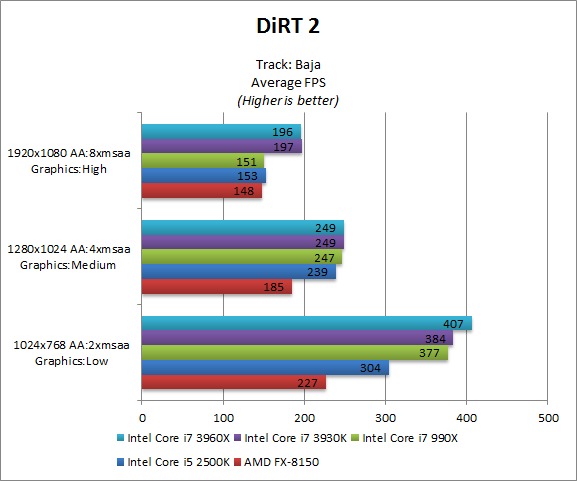 DiRT 2 is a bit newer of a title that was released in December 2009. What is interesting on this benchmark is that in the past we have seen little difference between different CPU's at the higher resolutions as the game becomes much more GPU-limited at those settings. The extra 40FPS increase is the same for both the Intel i7 3960X and the 3930K, so it is clear that this performance gain is due to the new chipset more than the actual CPU's themselves. 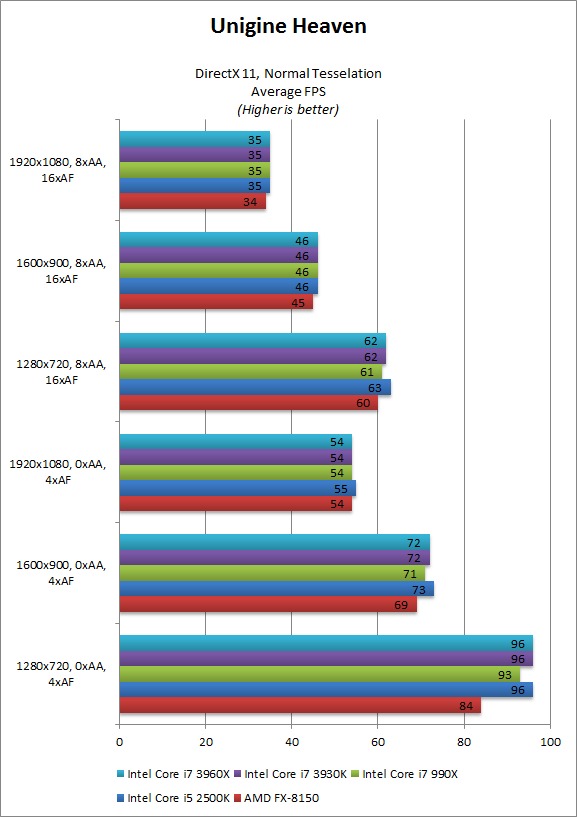 Unigine Heaven is a DX11 benchmark that from our testing appears to be very GPU limited. In fact, it is so GPU limited that even the new Sandy Bridge-E CPU's do not show any notable performance gains over the other test CPU's.

The only issue we saw was that in order to get this high of performance, these CPU's run a bit hot. We absolutely do not recommend using the stock Intel air cooler with any Sandy Bridge-E heatsink and recommend (at least at launch) using either the Intel DRX-B or the Coolit Eco II liquid cooling solutions. There are sure to be more third party cooling solutions available soon after launch however, so even better options may become available in the future.