In the past, there were arguments for using either an AMD or Intel processor for Photoshop, but with the new Ryzen 5000-series CPUs, AMD takes such a large lead that it will be very difficult to justify using Intel over AMD. Because Photoshop doesn't scale well with more cores, the higher-end Ryzen 9 5900X and 5950X might not be the best value for Photoshop since they are no faster than the Ryzen 7 5800X, but all three of these CPUs beat the Intel Core i9 10900K by a solid 10%. For those on a tighter budget, Ryzen 5 5600X outperforms the similarly-priced Intel Core i5 10600K by an even larger 22%.

Over the last few years, AMD has been making great strides with their Ryzen and Threadripper processors, often matching – or beating – the performance from similarly priced Intel options. This has caused Intel and AMD to constantly trade places as king of Photoshop performance depending on which product line was most recently updated.

With the launch of AMD's new Ryzen 5000-series processors, however, it is very likely that AMD will be able to take a very solid lead over Intel in Photoshop. AMD hasn't added any more cores to their new line of processors, but among other things, they are touting a 19% IPC (instructions per clock) improvement. In theory, this could translate to almost a 20% performance increase over the previous generation, although it will likely heavily depend on the application. 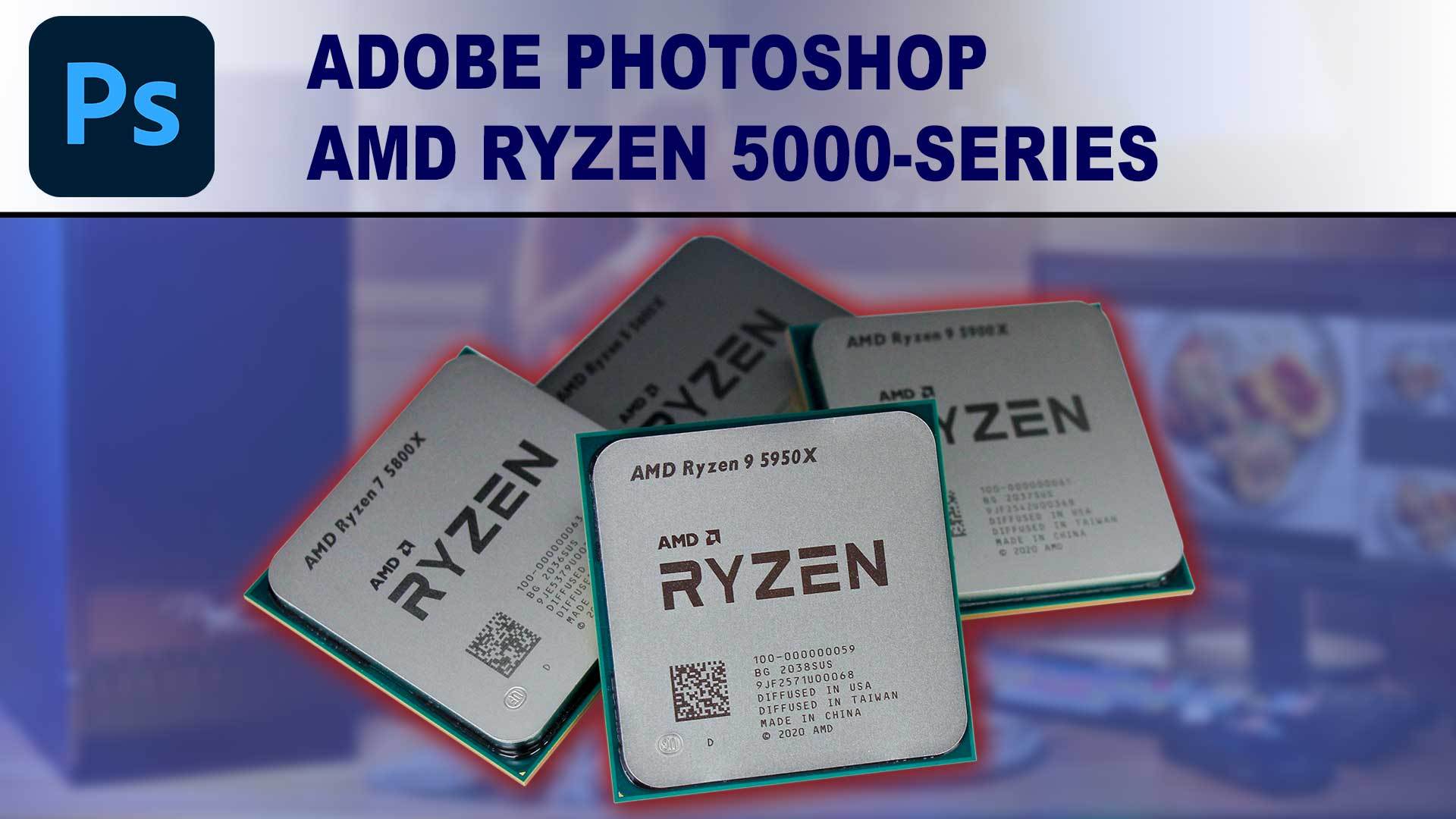 In this article, we will be examining the performance of the new AMD Ryzen 5600X, 5800X, 5900X, and 5950X in Photoshop compared to a range of CPUs including the Intel 10th Gen, Intel X-10000 Series, AMD Threadripper 3rd Gen, and the previous generation AMD Ryzen 3000-series processors. If you are interested in how these processors compare in other applications, we also have other articles for Premiere Pro, After Effects, Lightroom Classic, and several other applications available on our article listing page.

In order to see how each of these configurations performs in Photoshop, we will be using our PugetBench for Photoshop V0.92 benchmark and Photoshop 2021 (22.0). This benchmark version includes the ability to upload the results to our online database, so if you want to know how your own system compares, you can download and run the benchmark yourself. 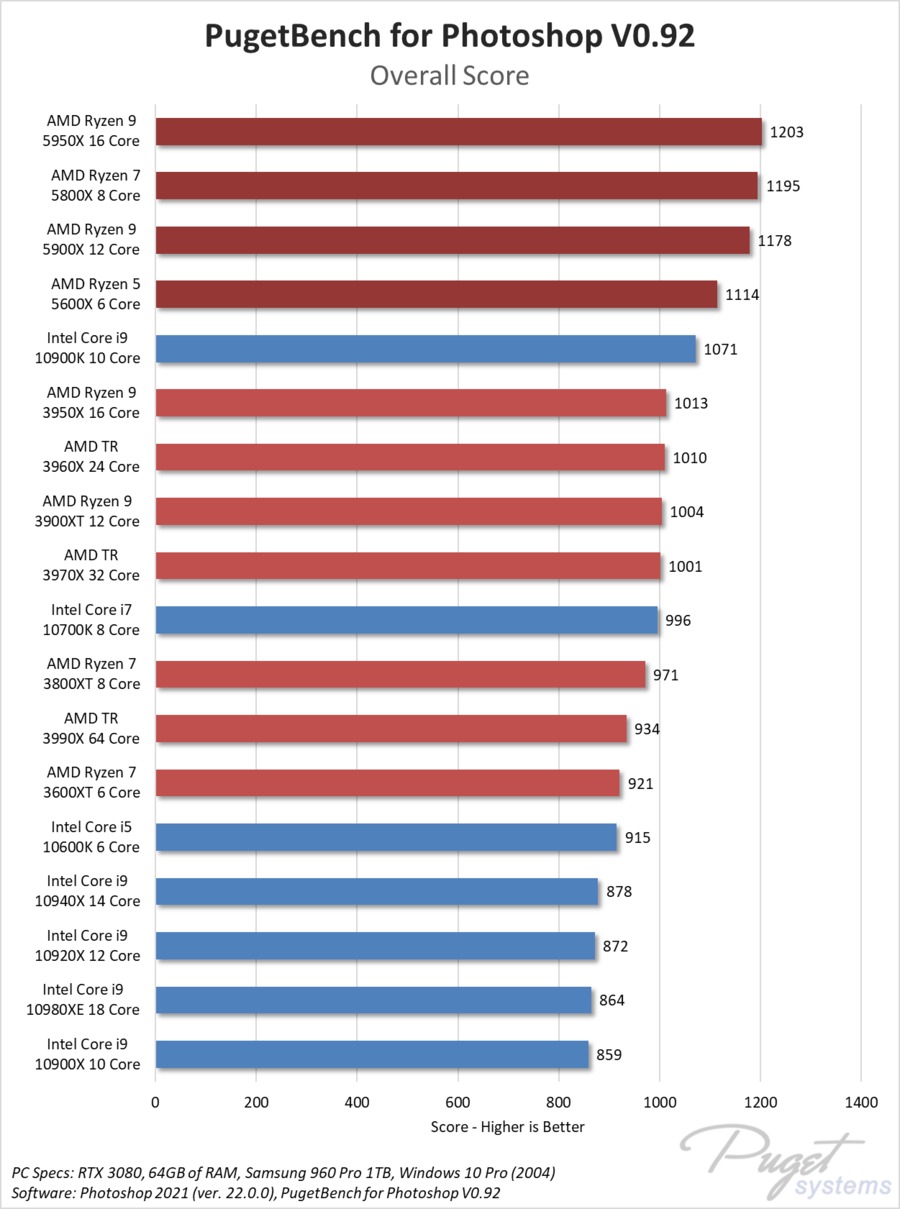 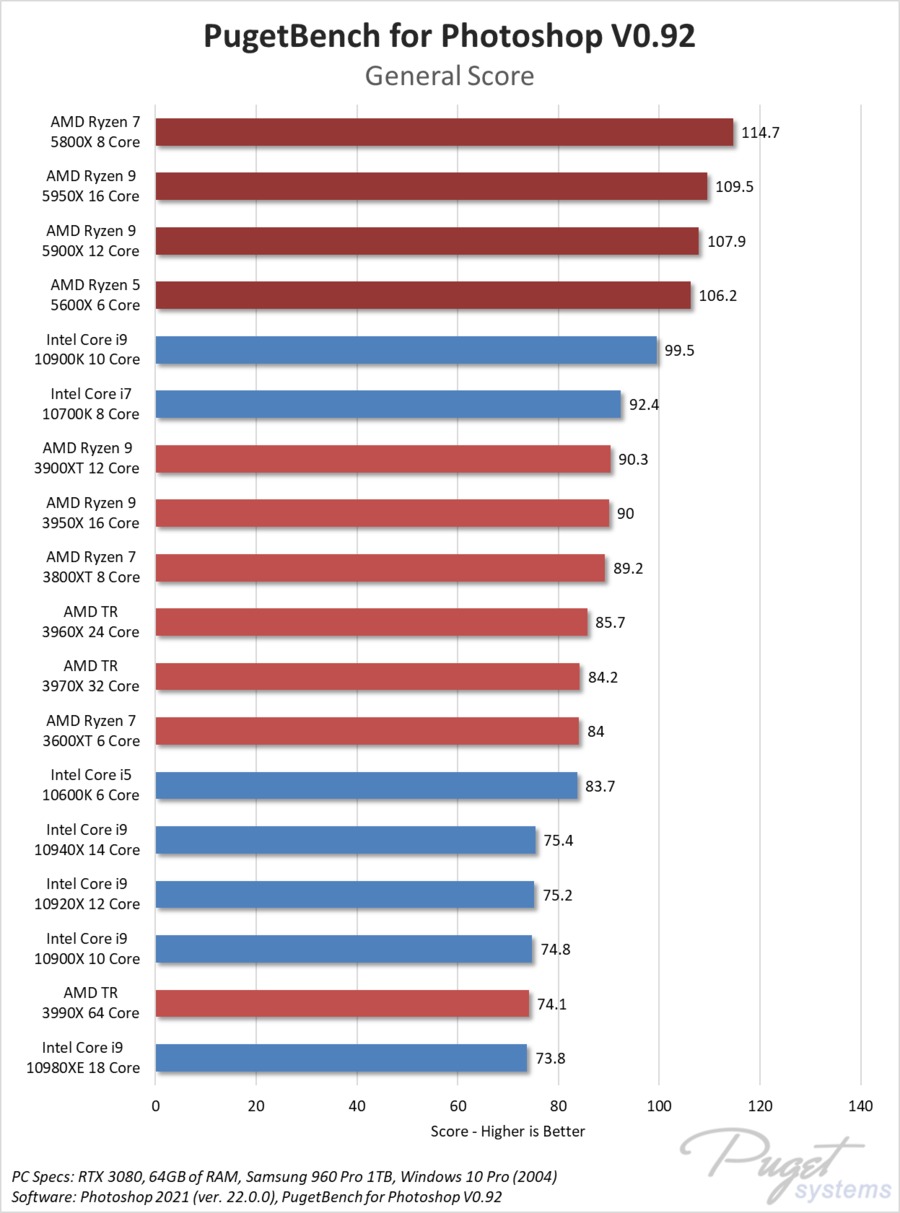 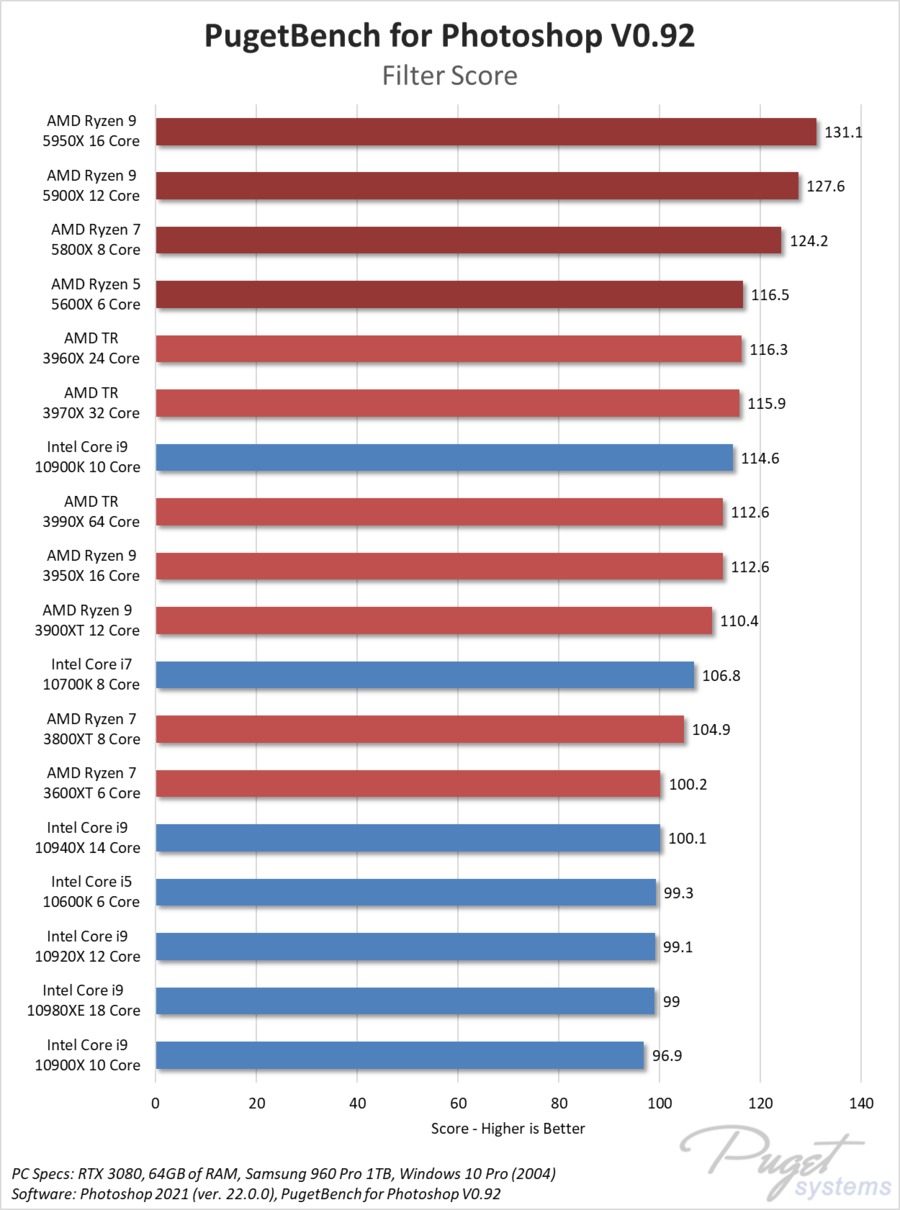 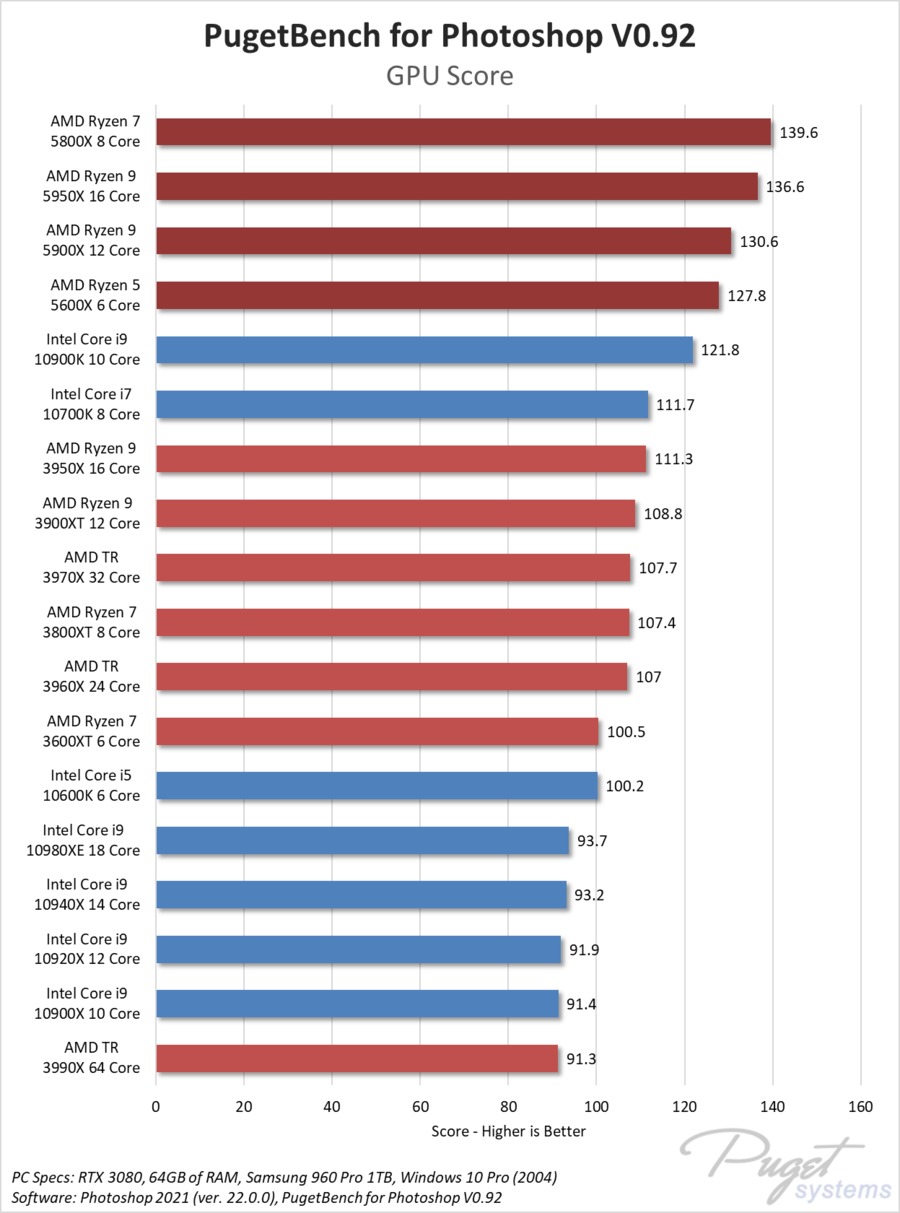 If it isn't immediately obvious, one thing is clear: these new CPUs from AMD are absolutely terrific. Since Photoshop doesn't take great advantage of more than a handful of cores, the Ryzen 5800X, 5900X, and 5950X all perform within a few percent of each other while the Ryzen 5 5600X falls behind the other models by about 7%.

What is really impressive is that even the modest Ryzen 5 5600X is able to beat every single Intel (and AMD) processor that was previously available. The Intel Core 10th Gen CPUs are much better for this kind of workload than the X-series, but even compared to the old king of Photoshop performance – the Intel Core i9 10900K – the 5600X is about 4% faster even though it is nearly $200 less expensive. Comparing it to the more similarly-priced Intel Core i5 10600K, the 5600X is a very solid 22% faster in our Photoshop benchmark.

With the higher-end Ryzen models, we are looking at roughly a 10% increase in performance over the Core i9 10900K. Obviously the best value between the three Ryzen 7/9 CPUs is the Ryzen 7 5800X (which is a bit expensive than the Core i9 10900K), but if your workflow includes other apps that can take advantage of the higher core count of the 5900X/5950X, it is good to know that you won't be giving up anything in Photoshop.

Compared to the previous generation AMD Ryzen 3000-series CPUs, these new processors are all roughly 20% faster than the CPUs they are replacing. That is a terrific performance bump over the previous generation, and is very close to the 19% IPC improvements that AMD was touting during the product announcement. They do have a 10-20% higher price tag as well, although in terms of absolute cost that works out to only a $50 increase. As a part of the overall cost of a computer, that is a very modest increase in price for the amount of performance they are able to achieve.

Are the AMD Ryzen 5000-series or Intel Core 10th Gen better for Photoshop?

In the past, there were arguments for using either an AMD or Intel processor for Photoshop, but with the new Ryzen 5000-series CPUs, AMD takes such a large lead that it will be very difficult to justify using Intel. Because Photoshop doesn't scale well with more cores, the higher-end Ryzen 9 5900X and 5950X might not be the best value for Photoshop alone, but the Ryzen 7 5800X beats the Intel Core i9 10900K by a solid 10%, while the Ryzen 5 5600X outperforms the similarly-priced Intel Core i5 10600K by an even larger 22%.

If you were to compare AMD and Intel processors based on price alone, AMD is anywhere from 10% to almost 40% faster than Intel. However, we do need to make clear that since the Intel X-series CPUs are not as strong in Photoshop as the lower-priced Intel 10th Gen CPUs, that is being somewhat unfair to Intel. There is almost no reason to use the X-series when the Core i9 10900K is both less expensive and faster, so the true performance lead with the AMD Ryzen 5000-series peaks out closer to only 20%

Keep in mind that the benchmark results in this article are strictly for Photoshop and that performance will vary widely in different applications. If your workflow includes other software packages (we have similar articles for Premiere Pro, After Effects, and Lightroom Classic), you need to consider how the system will perform in those applications as well. Be sure to check our list of Hardware Articles to keep up to date on how all of these software packages – and more – perform with the latest CPUs.