With Premiere Pro now supporting GPU-accelerated encoding/decoding of H.264/HEVC media, Intel is no longer an auto-pick for Premiere Pro, allowing AMD to show what they are capable of on a level playing field. At many points of the stack, the AMD Ryzen 5000-series CPUs do extremely well, solidly beating similarly-priced Intel CPUs by 12-20%.

Until recently, Intel has been somewhat of an automatic pick for Premiere Pro since many of their CPUs support a feature called Quick Sync that could be used for hardware accelerated encoding and decoding of H.264 and HEVC codecs. These codecs are extremely common, but are also notoriously difficult to edit due to the nature of how they compress the video data. If you want to read more about this, be sure to check out our Why cant my new workstation edit H.264 media smoothly? article

6 months ago, however, Adobe added GPU accelerated encoding which allowed any system with a supported NVIDIA or AMD GPU to benefit from hardware encoding when exporting to H.264/HEVC. Even more recently, in Premiere Pro 14.5, Adobe also added the other half of the picture: GPU accelerated decoding (playback) of H.264 and HEVC media.

What this means is that for the first time, AMD Ryzen CPUs can be a strong contender for Premiere Pro. GPU acceleration doesn't just benefit the new Ryzen 5000-series processors (previous Ryzen CPUs, Threadripper, and even the Intel X-series also benefit), but we are very curious to see how Intel and AMD stack up is now that Intel has lost their automatic lead. 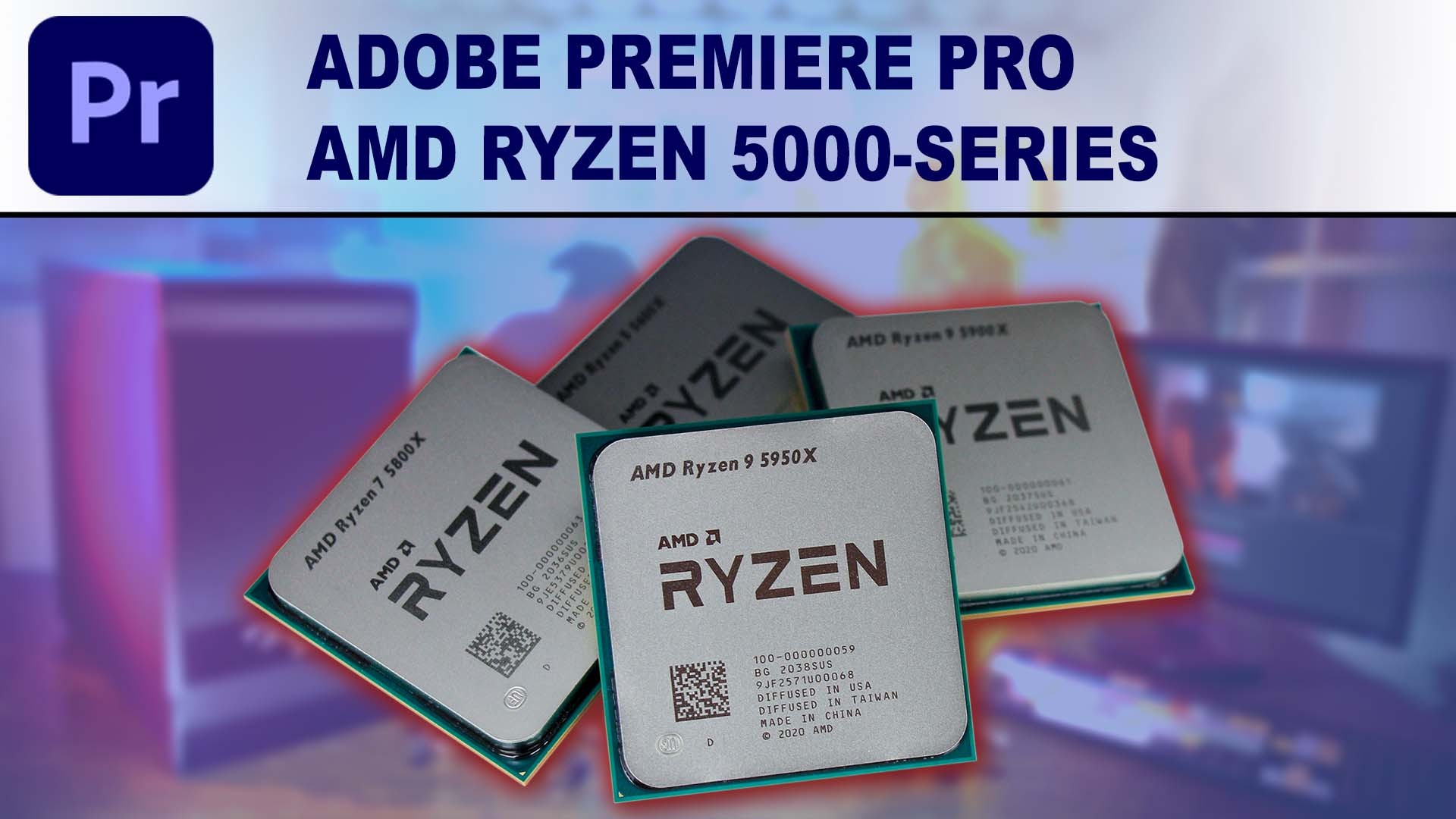 In this article, we will be examining the performance of the new AMD Ryzen 5600X, 5800X, 5900X, and 5950X in Premiere Pro compared to a range of CPUs including the Intel 10th Gen, Intel X-10000 Series, AMD Threadripper 3rd Gen, and the previous generation AMD Ryzen 3000-series processors. If you are interested in how these processors compare in other applications, we also have other articles for After Effects, Lightroom Classic, Photoshop, and several other applications available on our article listing page.

In order to see how each of these configurations performs in Premiere Pro, we will be using our PugetBench for Premiere Pro V0.92 benchmark and Premiere Pro version 14.5. This benchmark version includes the ability to upload the results to our online database, so if you want to know how your own system compares, you can download and run the benchmark yourself. 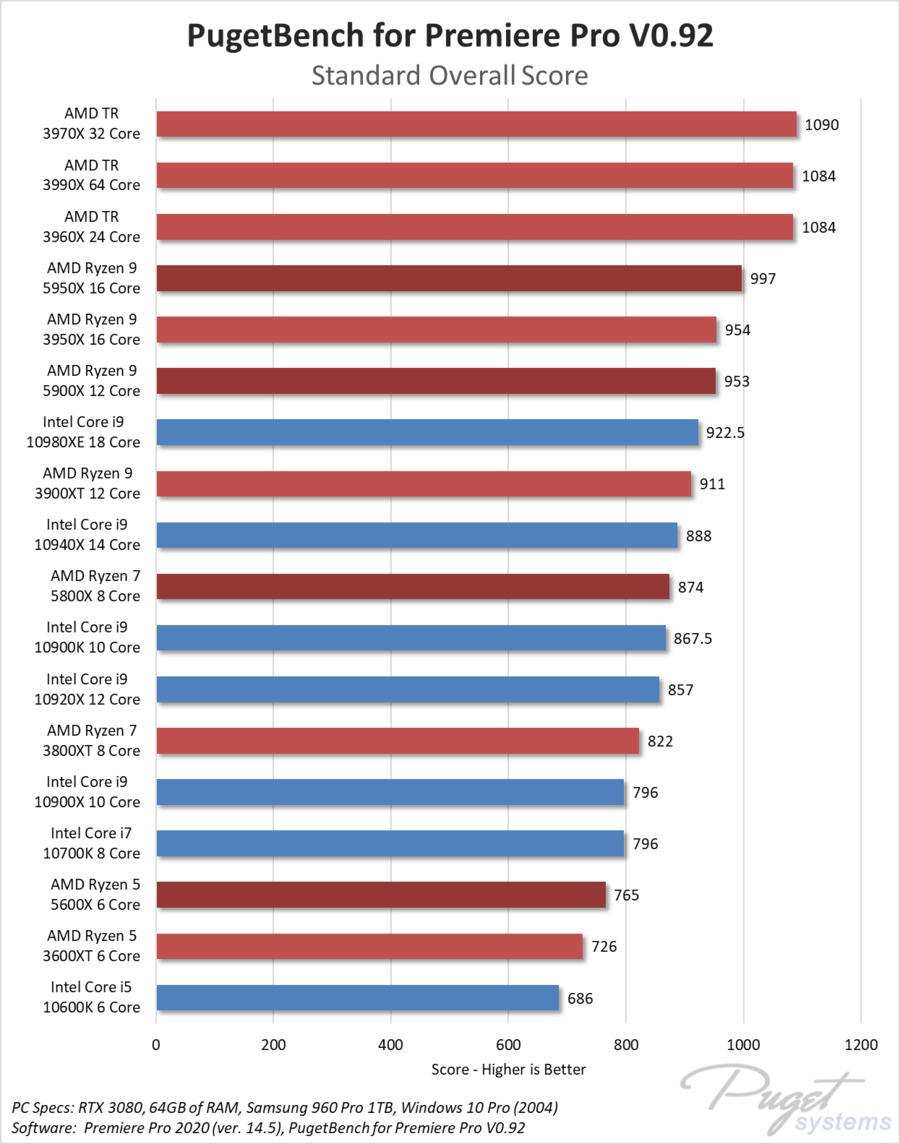 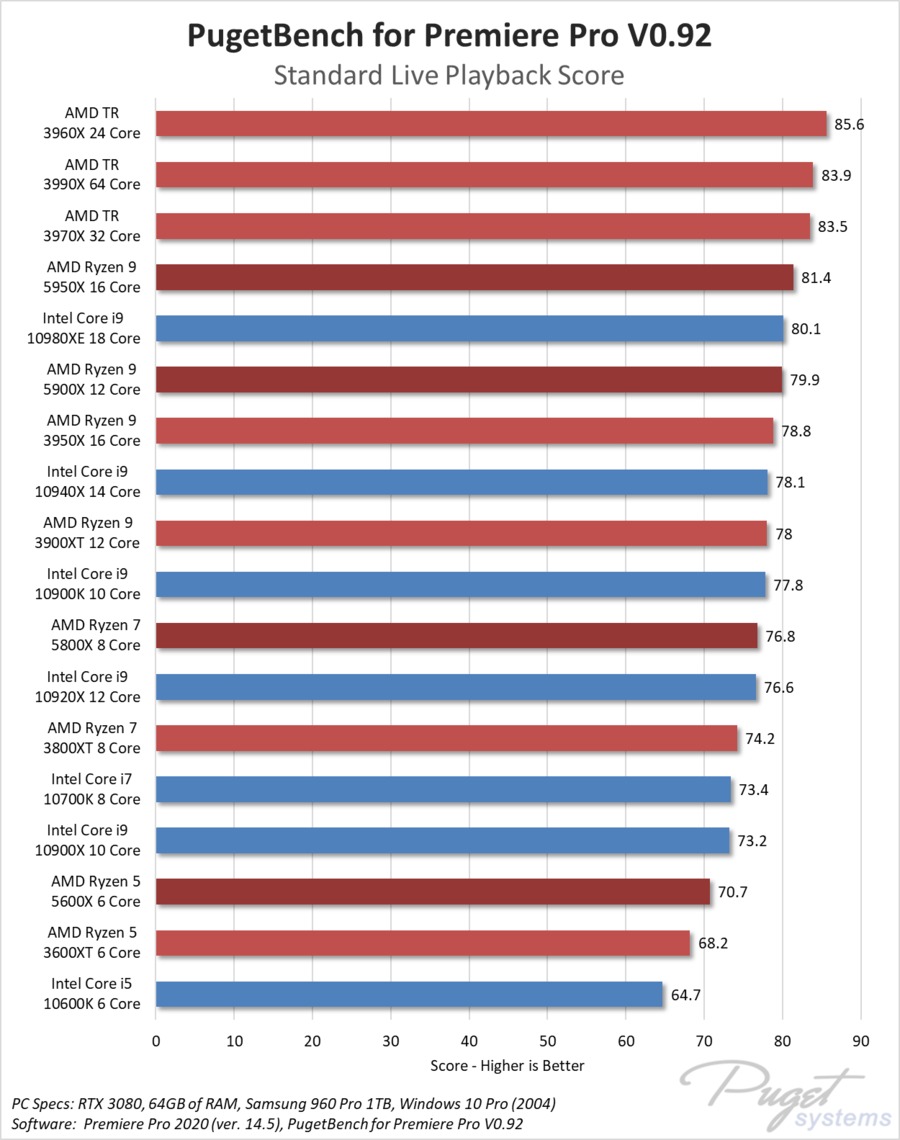 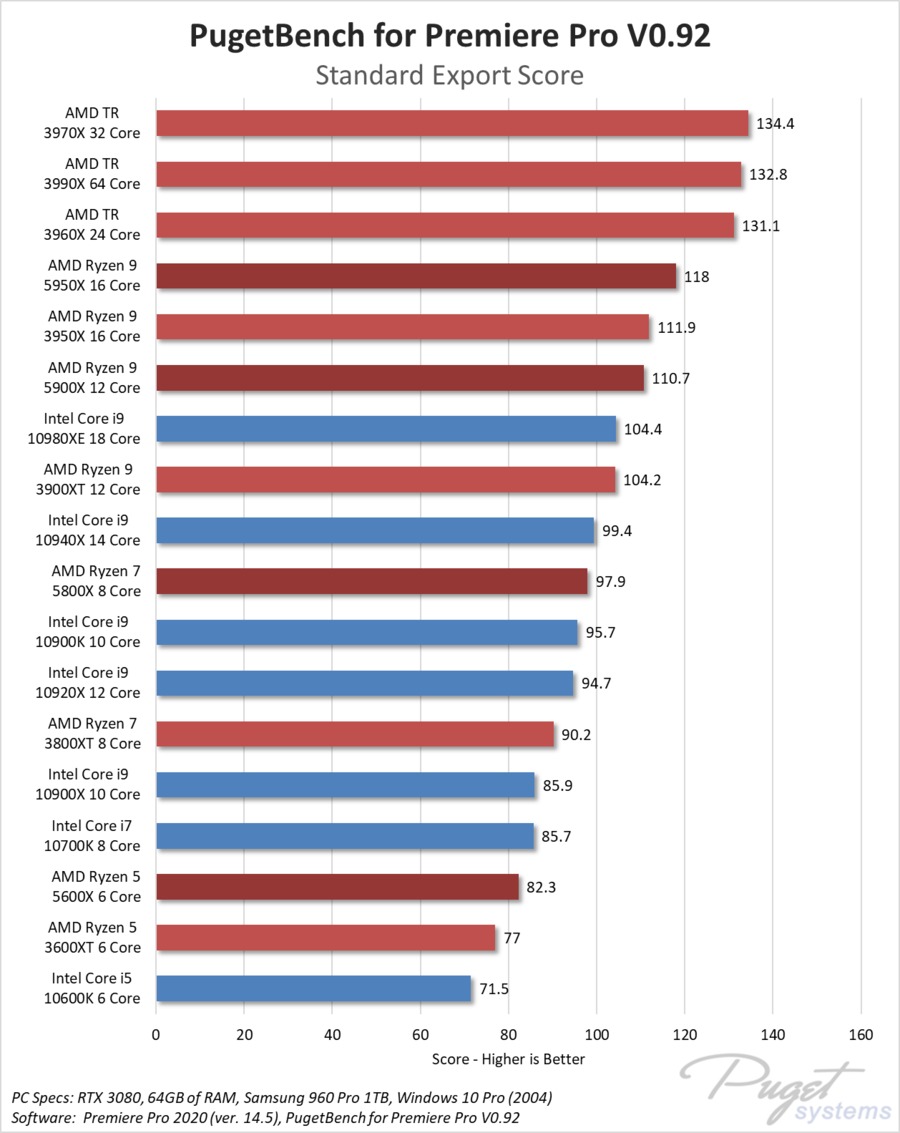 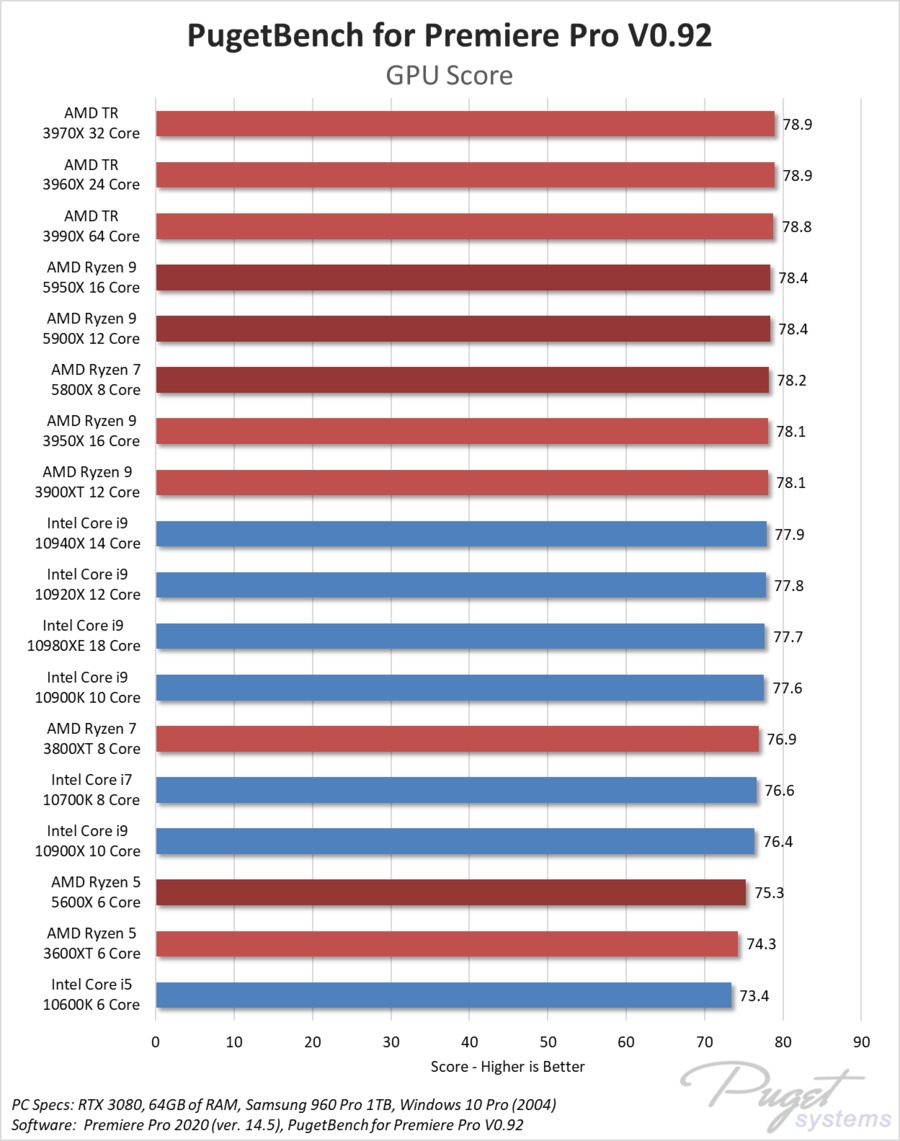 In many of our other articles (especially those for Photoshop and After Effects), the new AMD Ryzen 5000-series CPUs simply blew away everything else. However, those applications are very lightly threaded, making the 19% IPC improvements that AMD made in these new processors extremely valuable.

Premiere Pro, on the other hand, can take advantage of significantly more CPU cores, and the latest version also uses the GPU far more than it has in the past. Before, using an Intel CPU with Quick Sync was the only way to get hardware accelerated encoding and decoding of H.264/HEVC media. Now, that can be offloaded to the GPU, so many of the advantages of Intel CPUs with Quick Sync that we have seen in ealier articles are not as relevant.

This results in some very interesting data compared to the testing we have done in the past. Starting at the low end, the Ryzen 5 5600X does very well, beating the similarly priced Intel Core i5 10600K by a respectable 12%. The Ryzen 7 5800X does not do quite as well, but still manages to barely out-score the Intel Core i9 10900K by 1%.

Versus the AMD Ryzen 3000-series CPUs from the previous generation, the new Ryzen 5000-series are all roughly 5% faster than the CPUs they are replacing. That might not look great since they also have a 10-20% higher price tag as well, although in terms of absolute cost that works out to only a $50 increase which is fairly small if you look at it as a part of the overall cost of a computer. The 5950X performance improvement is also right on the money with what AMD claimed during their product announcement, which is always great to see.

This creates a bit of an odd disparity in our results analysis compared to what we have seen in the past. The Ryzen 5000-series CPUs are not all that much faster than the previous generation in Premiere Pro, but because this is the first time that Intel hasn't had the sole advantage of hardware encoding/decoding (via Quick Sync), it lets AMD fully show what performance they have to offer. In fact, if you look at our Premiere Pro CPU performance: Intel Core 10th Gen vs AMD Ryzen 3rd Gen article from just 6 months ago, you will see that the AMD Ryzen 3000-series CPUs have seen up to a 30% improvement in Premiere Pro benchmark scores – largely due to the addition of GPU-accelerated decoding/encoding.

This performance gain also allows the AND Ryzen 9 5950X to knock on the door of the far more expensive AMD Threadripper CPUs. Threadripper is still faster in Premiere Pro, but the difference between the 5950X and the 3960X is now less than 10%.

Until recently, Intel has held a commanding lead for Premiere Pro at the mid-range due to the fact that the Intel 10th Gen CPUs supported Quick Sync which Premiere Pro could use to greatly improve performance when working with H.264 and HEVC media. With Premiere Pro 14.5 including both GPU-accelerated encoding and decoding, however, AMD is able to show what they are capable of when on a level playing field. At many points of the stack, the AMD Ryzen 5000-series CPUs do extremely well, solidly beating similarly-priced Intel CPUs by 12-20%.

The exception is the AMD Ryzen 7 5800X, which still manages to pull ahead of the Intel Core i9 10900K, but only by 1% -effectively tying those two CPUs in terms of overall performance. Even though Premiere Pro now has GPU decoding/encoding, this actually puts Intel in a very slight lead at this price point since being able to use Quick Sync rather than your GPU for H.264/HEVC encoding and decoding frees up the video card to be used for other things like processing GPU effects, debayering R3D media, etc.

Another factor that has changed recently is that the Gigabyte B550 Vision D motherboard – with fully certified Thunderbolt support – has launched and passed our internal qualification process. In addition to Quick Sync, Thunderbolt was another reason we tended to use the Intel CPUs over Ryzen when the performance was similar. More than almost any other industry we target, Thunderbolt is incredibly important in the video editing world, and until now, only Intel platforms had Thunderbolt support that met our standards. With this motherboard, Thunderbolt is no longer as much of a factor when choosing between Intel 10th Gen and AMD Ryzen CPUs in our workstations.

Since we have not yet found a Threadripper motherboard with fully functioning Thunderbolt support, this also makes Ryzen a strong choice over Threadripper. The fastest Ryzen 5000-series CPU may still be ~10% slower than Threadripper, but for many that is a small price to pay to be able to use all their existing external drives.

Keep in mind that the benchmark results in this article are strictly for Premiere Pro and that performance will vary widely in different applications. If your workflow includes other software packages (we have similar articles for After Effects, Lightroom Classic, and Photoshop), you need to consider how the system will perform in those applications as well. Be sure to check our list of Hardware Articles to keep up to date on how all of these software packages – and more – perform with the latest CPUs.