In Adobe After Effects, there isn't much of a difference in overall performance between the Intel 10th Gen and AMD Ryzen 3rd Gen processors. The AMD Ryzen 9 3900X and 3800X are about 5% faster than the Intel 10th Gen CPUs for tracking, which can make AMD a slightly better choice for some users depending on how much tracking they do in After Effects.

However, the Intel Core i9 10900K and Core i7 10700K are about 5% faster than their AMD Ryzen counterparts for RAM preview and rendering, which is going to make them slightly more attractive for most After Effects users.

For a very long time, Intel processors have held our solid recommendation for After Effects since AE typically only uses a handful of cores and Intel tends to have higher per-core performance compared to AMD. However, with AMD's Ryzen 3rd Gen CPUs that were released in July of 2019, AMD was able to close the gap to the point that they only trailed behind the Intel 9th Gen CPUs by about 5% in After Effects. A 5% difference in performance is going to be hard to notice in the real world, which meant that (depending on what other applications you use in your workflow) there was an argument to be made for going with either brand.

With the launch of the new Intel 10th Gen desktop processors, we are interested to see if Intel is able to capture a solid lead once again in After Effects. 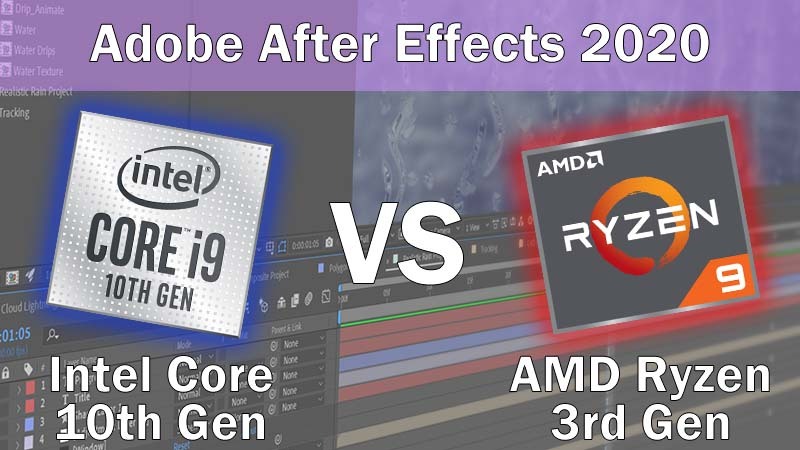 In this article, we will be examining the performance of the new Intel 10th Gen Core i9 10900K, i7 10700K, and i5 10600K in After Effects compared to a range of CPUs including the AMD Ryzen 3rd Gen, Intel X-10000 Series, AMD Threadripper 3rd Gen, as well as the previous generation Intel 9th Gen processors. In addition, we will be including a 2019 Mac Pro and iMac Pro to act as additional reference points. If you are interested in how these processors compare in other applications, we also have other articles for Premiere Pro, Photoshop, Lightroom Classic, and several other applications available on our article listing page.

In order to see how each of these configurations performs in After Effects, we will be using our PugetBench for After Effects V0.9 benchmark and After Effects 2020 (17.0.5). This benchmark version includes the ability to upload the results to our online database, so if you want to know how your own system compares, you can download and run the benchmark yourself.

One thing we do want to note is that due to COVID-19 impacting access to our testing hardware and platforms, we are reusing the Intel X-series, AMD Threadripper, and Mac results from our previous After Effects article: After Effects performance: PC Workstation vs Mac Pro (2019). Reusing old results is actually extremely common for hardware reviews, although we normally re-do all our testing to see if newer BIOS, driver, Windows update, and application versions change the results. In this case, however, we are going to simply have to be OK with a bit of a mix of old and new results.

We also found that the pre-launch motherboards we received from Gigabyte (and multiple other manufacturers) were not using Intel's specified power limits in their default BIOS settings. This isn't anything new, but now that Intel is being more aggressive about adding cores and pushing the frequency, this is resulting in much higher power draw (and heat) than you would expect from a 125W processor – often resulting in 100c temperatures after only a few seconds of load. Because of this, we decided to manually set the PL1 and PL2 power limits in the BIOS. We used a value of 125W for the PL1 setting on all three Intel 10th Gen CPUs we tested along with the following PL2 limits according to Intel's specifications:

Setting these power limits made our Noctua NH-U12S more than enough to keep these CPUs properly cooled and helps match our philosophy here at Puget Systems of prioritizing stability and reliability over raw performance in our workstations. 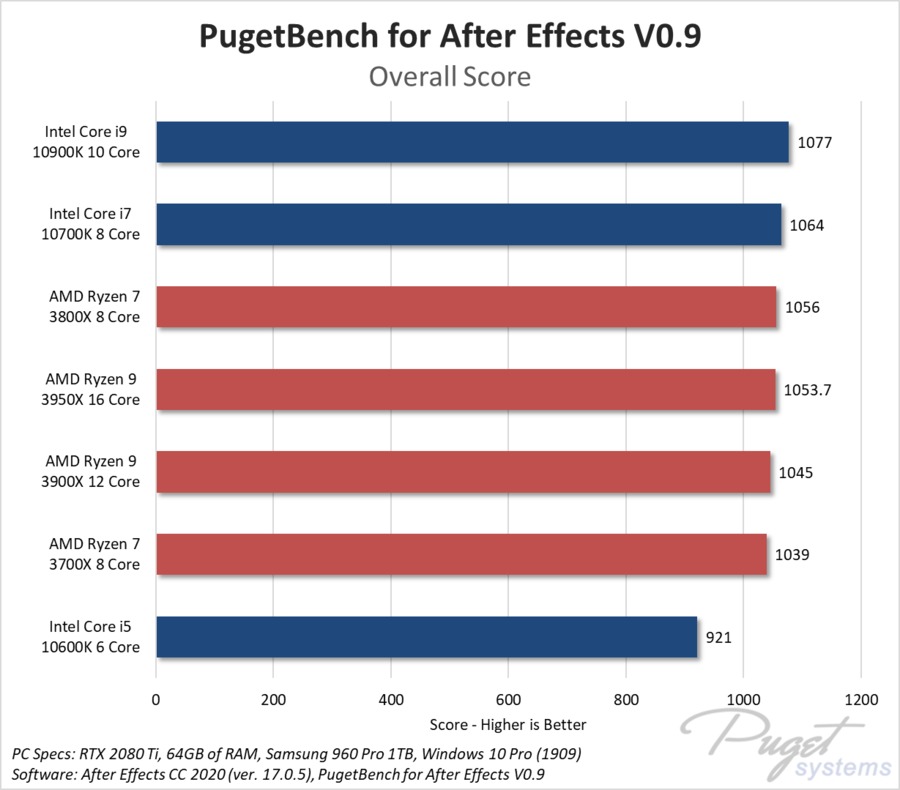 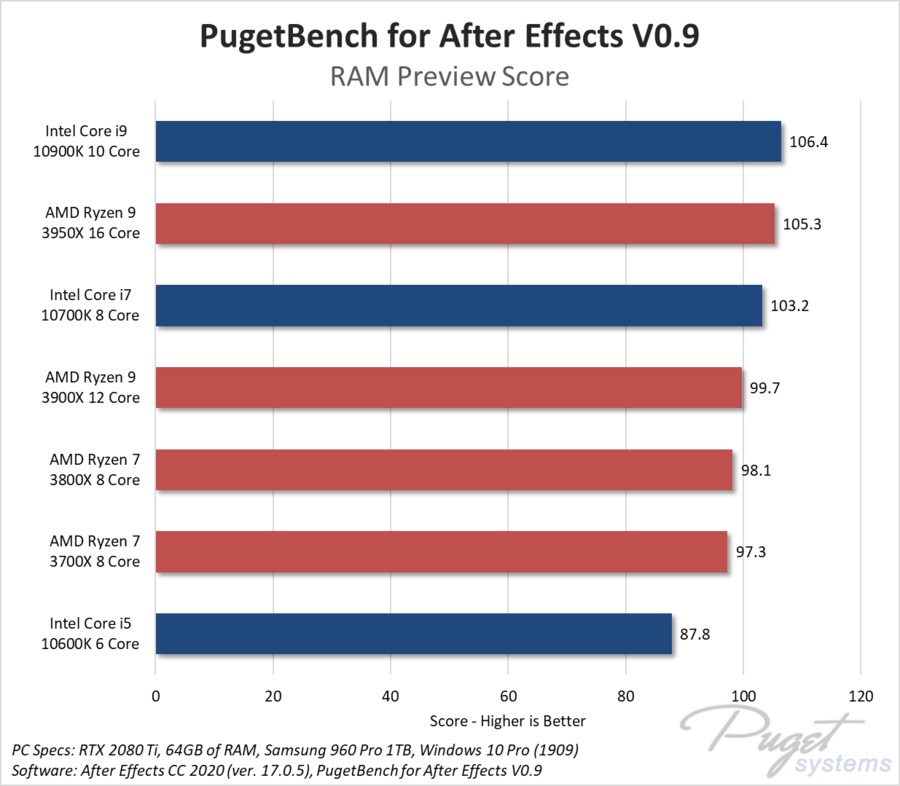 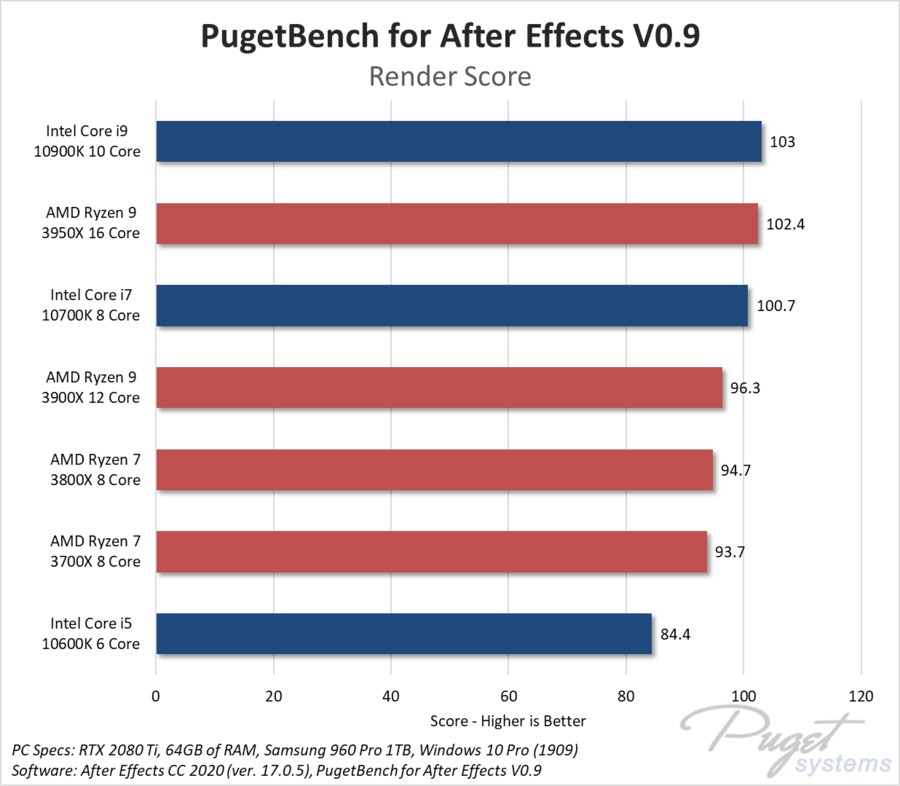 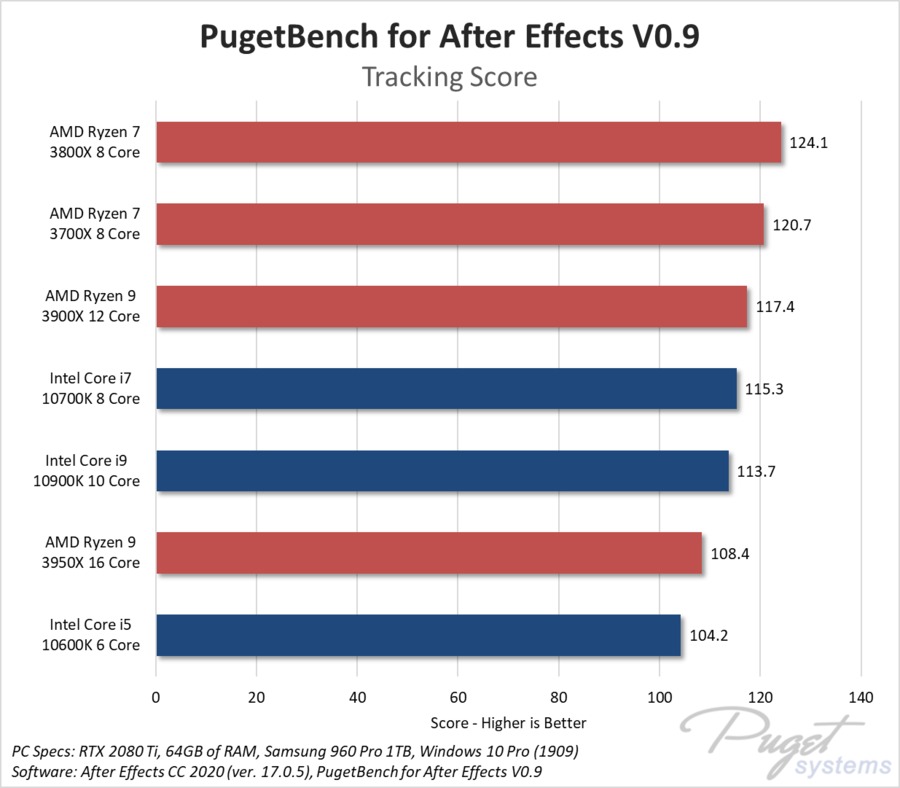 To start off our analysis of the Intel 10th Gen desktop processors, we are going to look at the performance in After Effects versus AMD's 3rd Gen Ryzen processors. This is likely to be what the majority of readers are going to be interested in, so we decided to pull these results out from the full slew of results that are in the next section.

Since After Effects doesn't scale particularly well with a higher number of CPU cores, you generally don't see much of a performance difference once you get to around the AMD Ryzen 7 or Intel Core i7 level since those CPUs tend to have similar single-core boost performance. You can see this in the chart above as only the Core i5 10600K has a significantly different overall score than the other CPUs we tested.

However, if we dig into the results in more detail, there are some nuances that are not apparent from the overall score. If you look at the RAM preview score (the second chart), the new Intel Core i9 10900K and i7 10700K are about 5% faster than the AMD Ryzen 9 3900X and 3800X respectively. In addition, the Intel 10th Gen CPUs are also about 6% faster than their AMD counterparts for rendering. On the other hand, the AMD Ryzen 3rd Gen processors are anywhere from 3-8% faster than the Intel Core i9 10900K and i7 10700K for tracking.

How does Intel 10th Gen stack up overall? 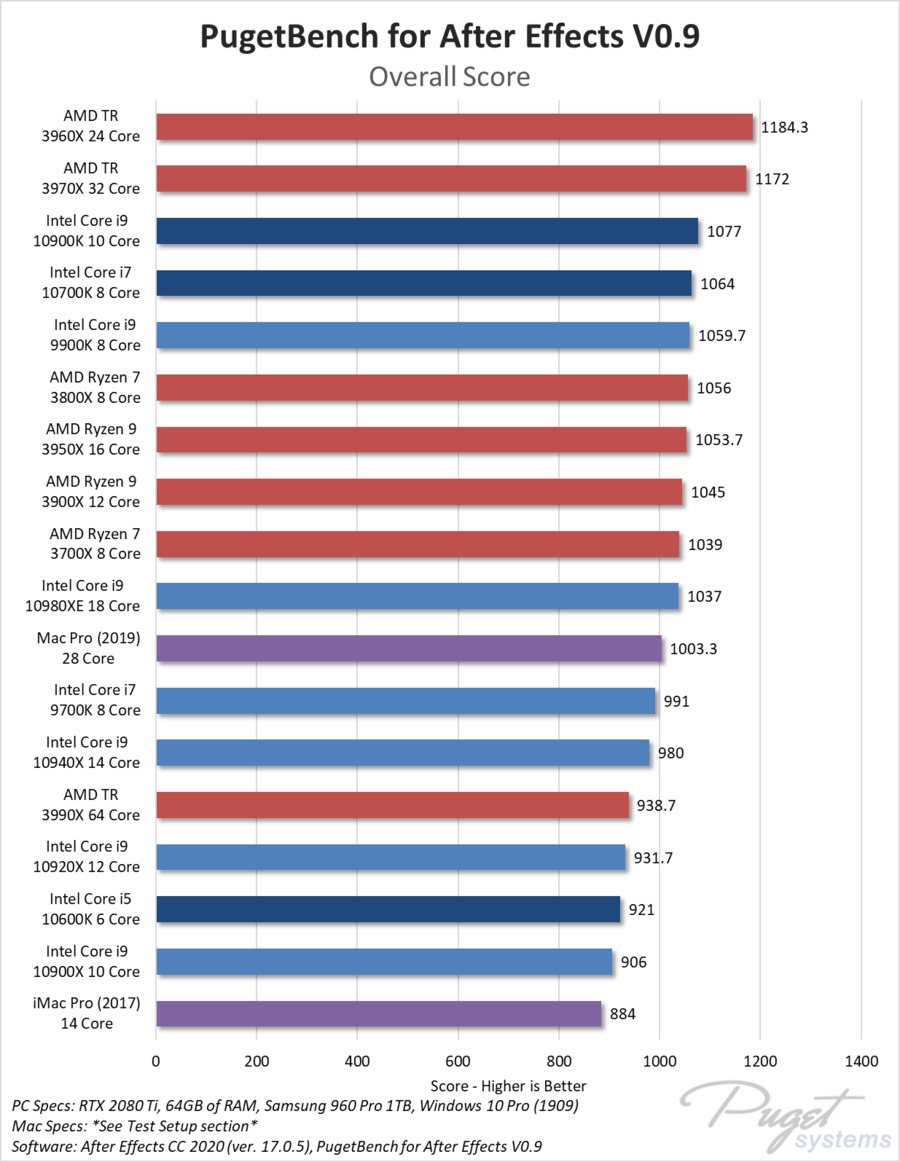 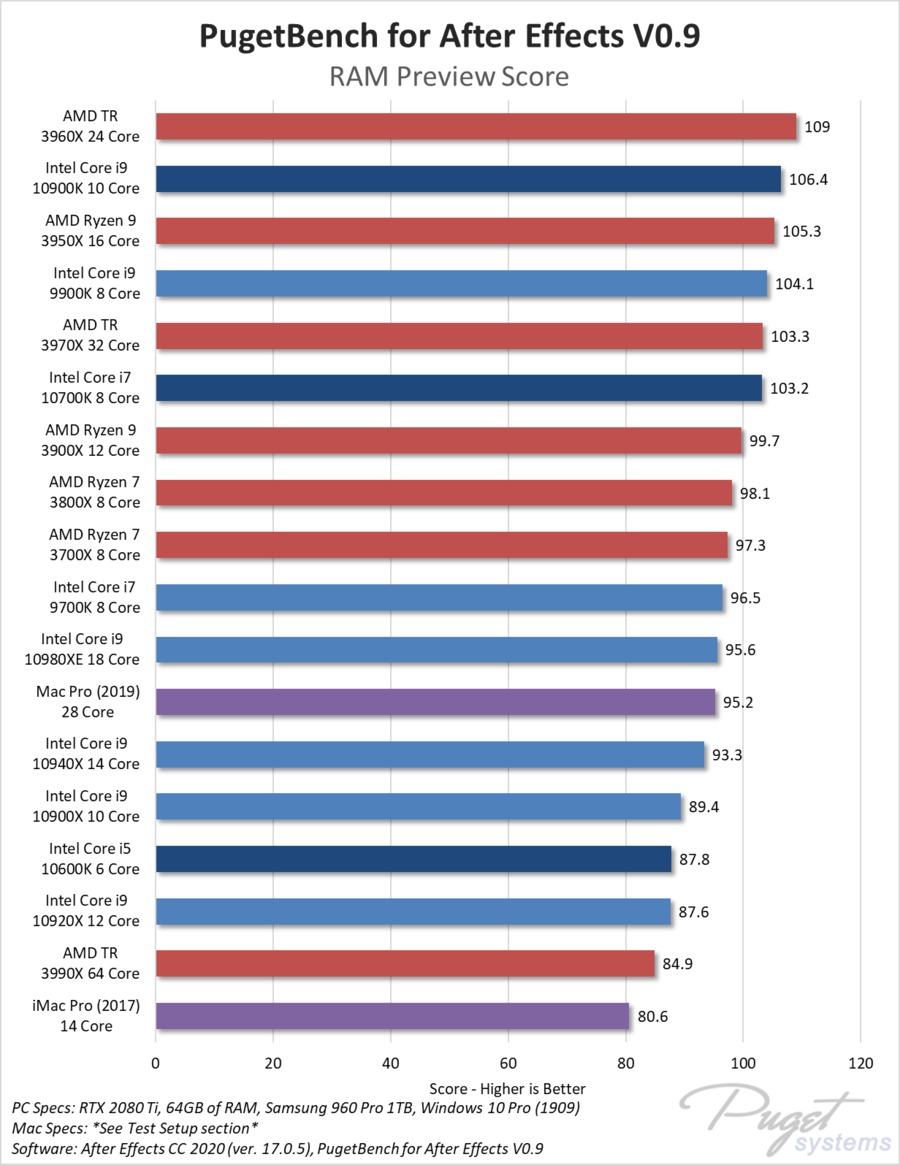 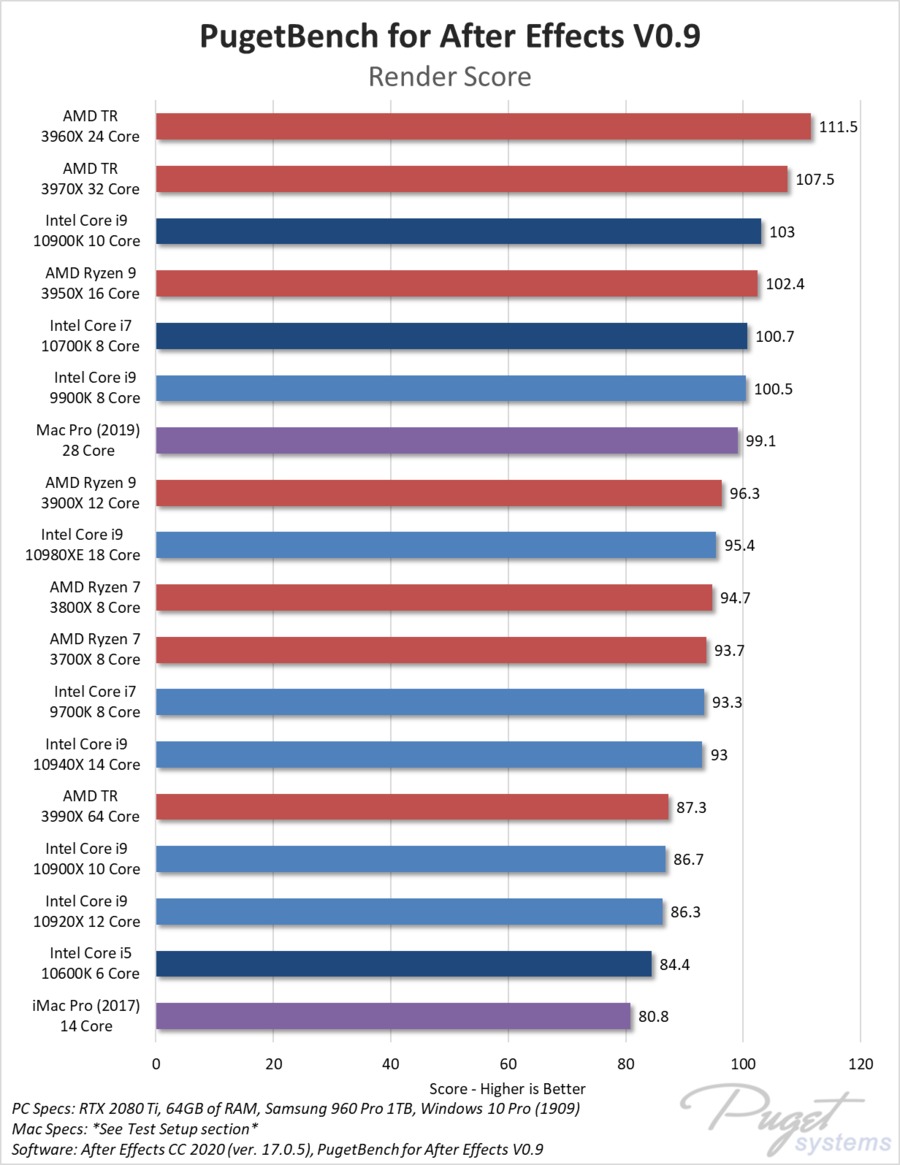 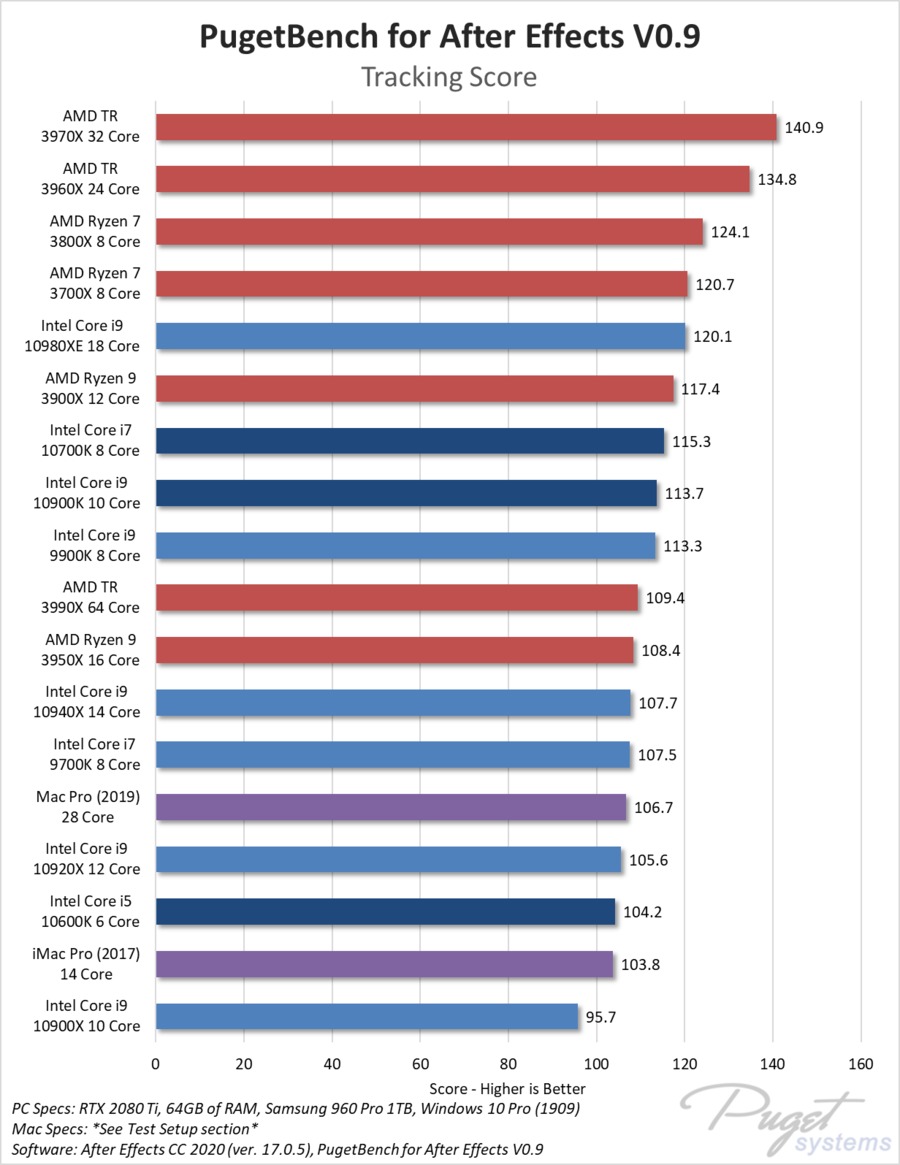 Looking at how the Intel 10th Gen processors compare against a wider range of CPUs, there are a couple of key points we want to note:

Next, relative to the new Intel Core i9 10900K, the Intel X-10000 Series processors are in general about 5% slower in After Effects. Depending on your workflow, an Intel X-series may still be the right option for you, but just be aware that if After Effects performance is a significant bottleneck for your work, you may want to opt for the much less expensive Core i9 10900K or i7 10700K over a more expensive Intel processor. AMD's Threadripper 3960X, however, is about 10% faster than the Core i9 10900K. Considering that the 3960X is almost three times the price of the Intel Core i9 10900K, that is a pretty hefty investment to make for a modest increase in performance.

Is the Intel Core 10th Gen or AMD Ryzen 3rd Gen better for After Effects?

Between the Intel 10th Gen and AMD Ryzen 3rd Gen CPUs, we give the edge to Intel due to their roughly 6% higher performance for RAM preview and rendering. The AMD Ryzen 3rd Gen processors tend to be around 5% faster for tracking, however, which may make them the slightly better option depending on the type of work you tend to do in After Effects.

Overall, this makes the Intel Core i9 10900K our new go-to CPU recommendation for After Effects. The Core i7 10700K is only be a few percent slower than the Core i9 10900K, however, so many may want to go with the more affordable Core i7 model to save a bit of money without sacrificing much performance. There is also a case to be made for the AMD Threadripper 3960X which is about 10% faster than the Core i9 10900K, although given it's much higher cost you are likely better off with the Core i9 10900K and spending the cost savings on more RAM, faster storage, or other system upgrades that can make a bigger difference for overall system performance.

Keep in mind that the benchmark results in this article are strictly for After Effects and that performance will vary widely in different applications. If your workflow includes other software packages (we have similar articles for Premiere Pro, Photoshop, and Lightroom Classic), you need to consider how the system will perform in those applications as well. Be sure to check our list of Hardware Articles to keep up to date on how all of these software packages (and more) perform with the latest CPUs.