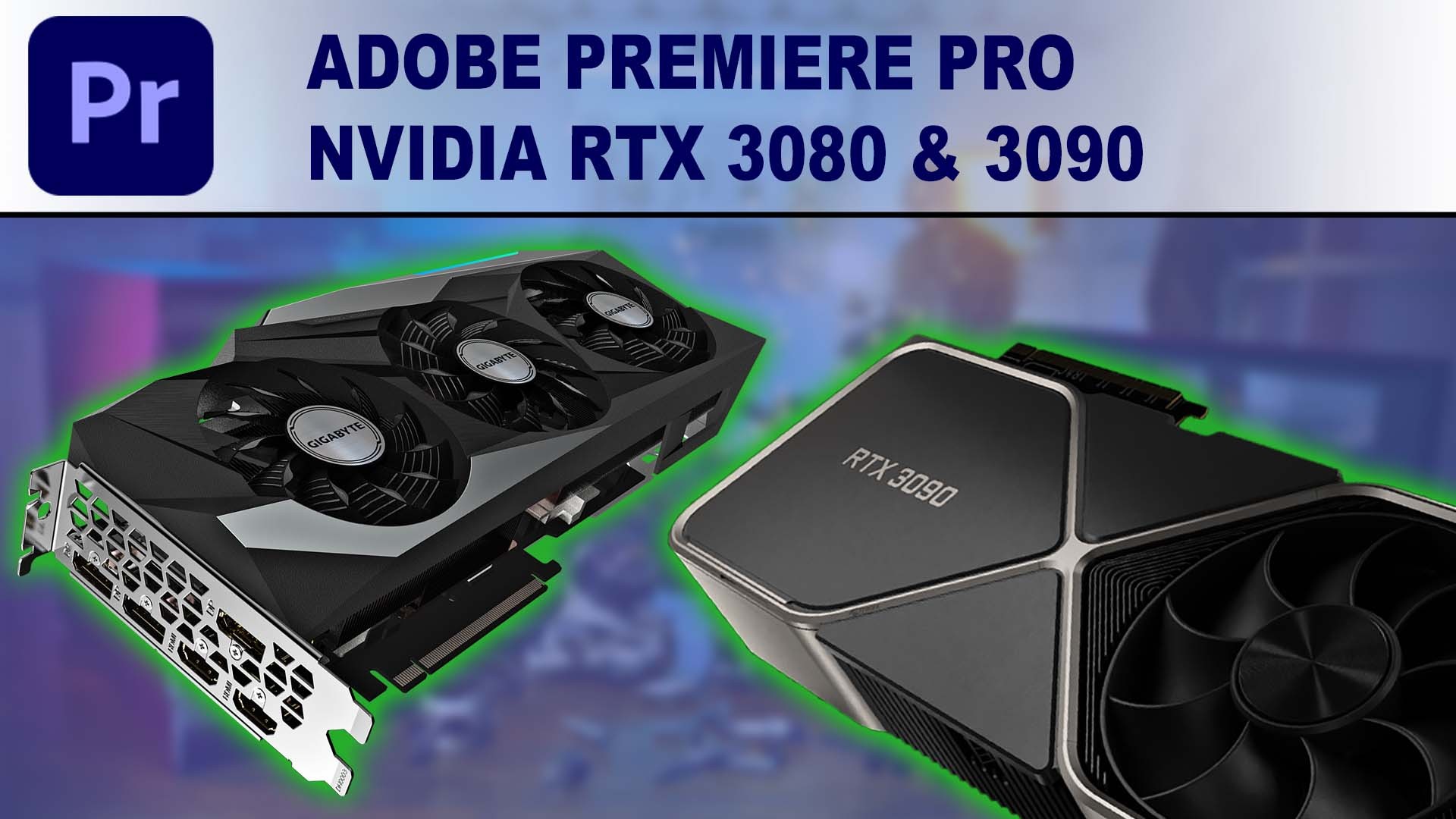 While it is a bit odd that the RTX 3080 has less VRAM than the 2080 Ti, all three of these new cards should all be capable of working with 4K timelines in Premiere Pro. The RTX 3080 and 3090 (with 10GB and 24GB of VRAM respectively) should also have no trouble with 8K timelines. However, keep in mind that the actual performance in those kinds of workflows depends more on the power of your CPU than anything else.

With the launch of the RTX 3090, we can update our previous Adobe Premiere Pro – NVIDIA GeForce RTX 3080 Performance article with results for the 3090, but since the RTX 3070 is not launching until sometime in October, we cannot include it at this time. However, we are very interested in how the RTX 3070 will perform, and when we are able to test that card, we will post another follow-up article with the results.

One thing we need to specifically point out is that we are using the latest beta build of Premiere Pro because the currently available production build (14.3.2) has a bug preventing it from properly processing R3D media with the RTX 30-series cards. This is a known issue, with the fix being implemented in the Premiere Pro beta. However, while one of the major features of the current beta is the addition of GPU-based H.264/HEVC decoding, we actually saw significantly lower performance with this feature enabled. This is likely due in part to how powerful of a CPU we are using, but we plan on investigating why hardware decoding is giving us worse performance in a future article. For now, we left hardware decoding disabled which, from what we can tell, results in nearly identical performance to Premiere Pro 14.3.2. 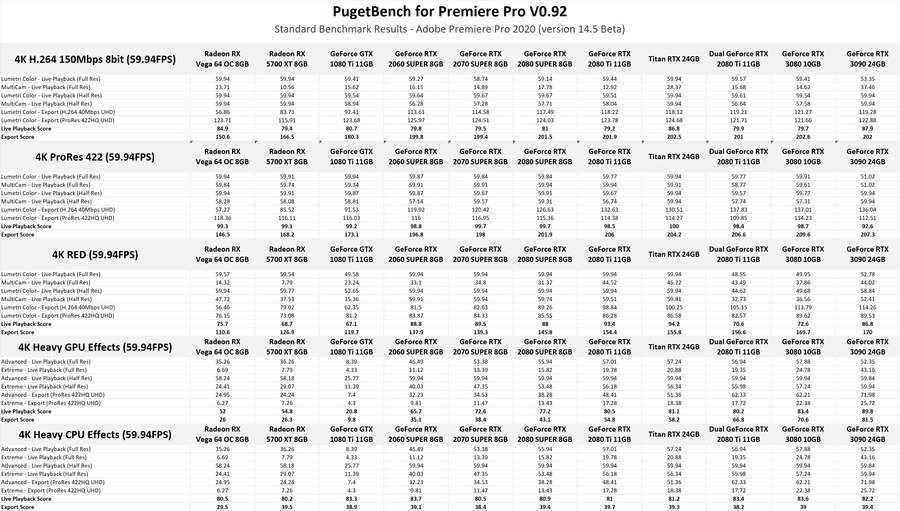 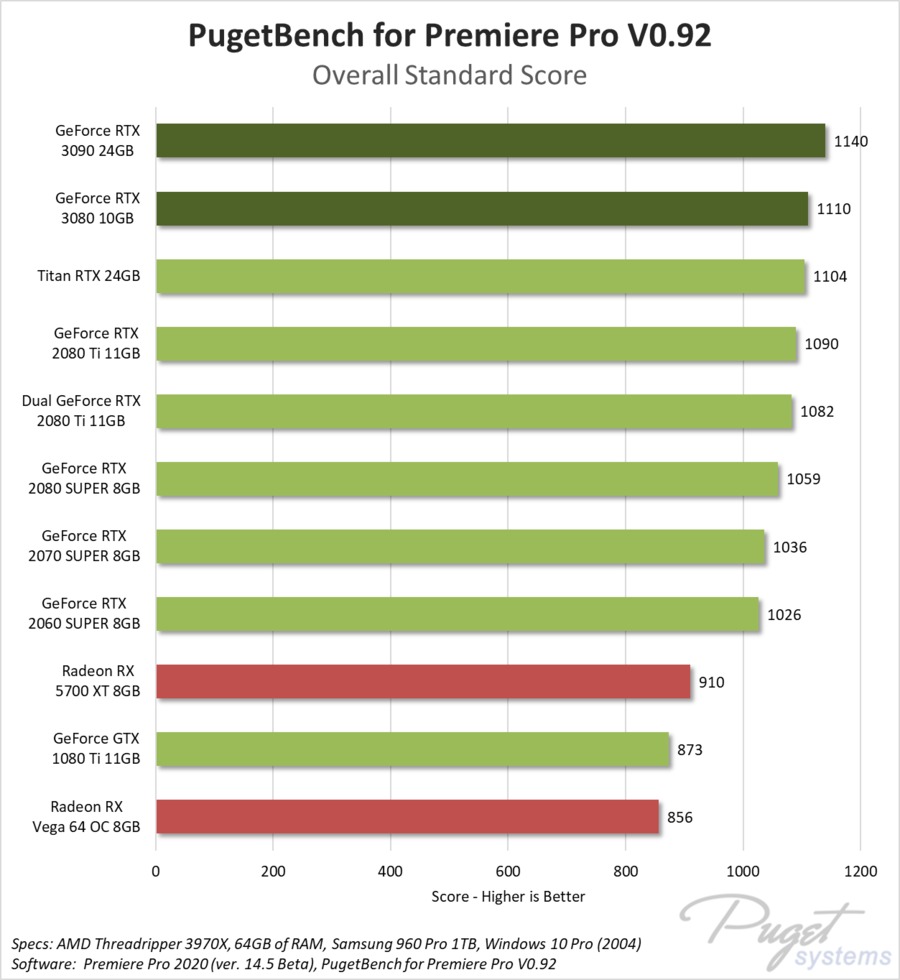 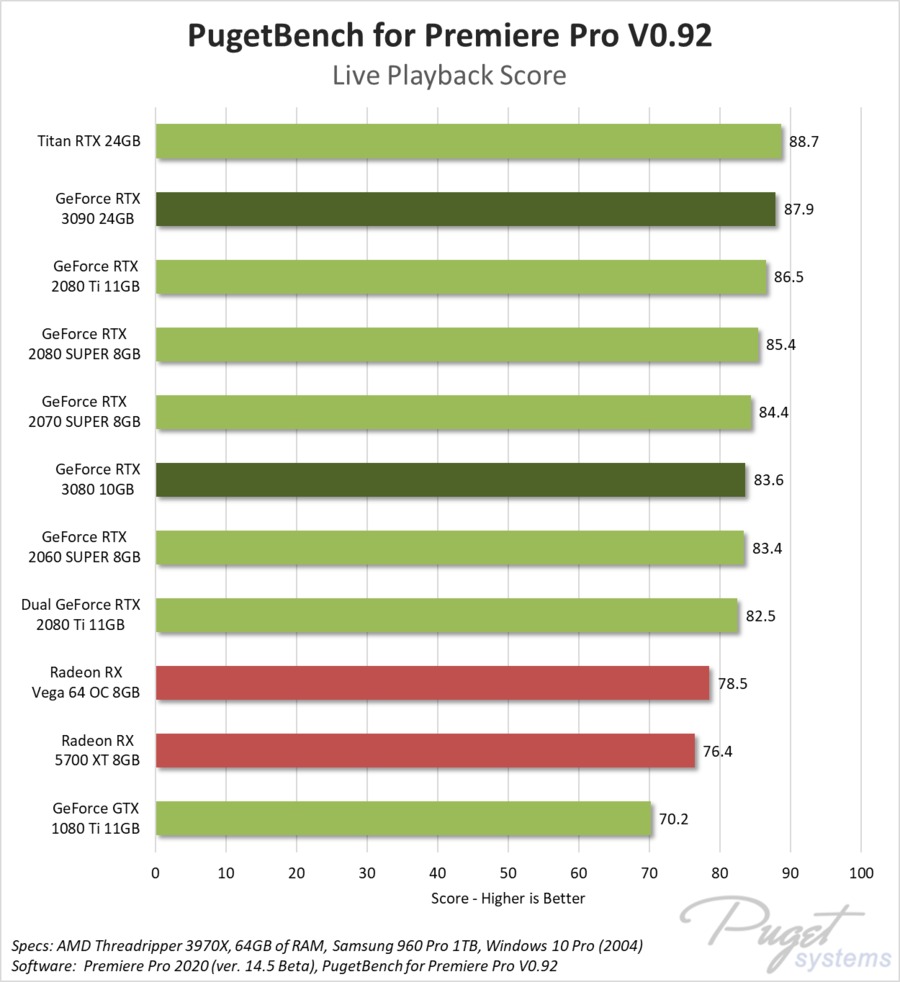 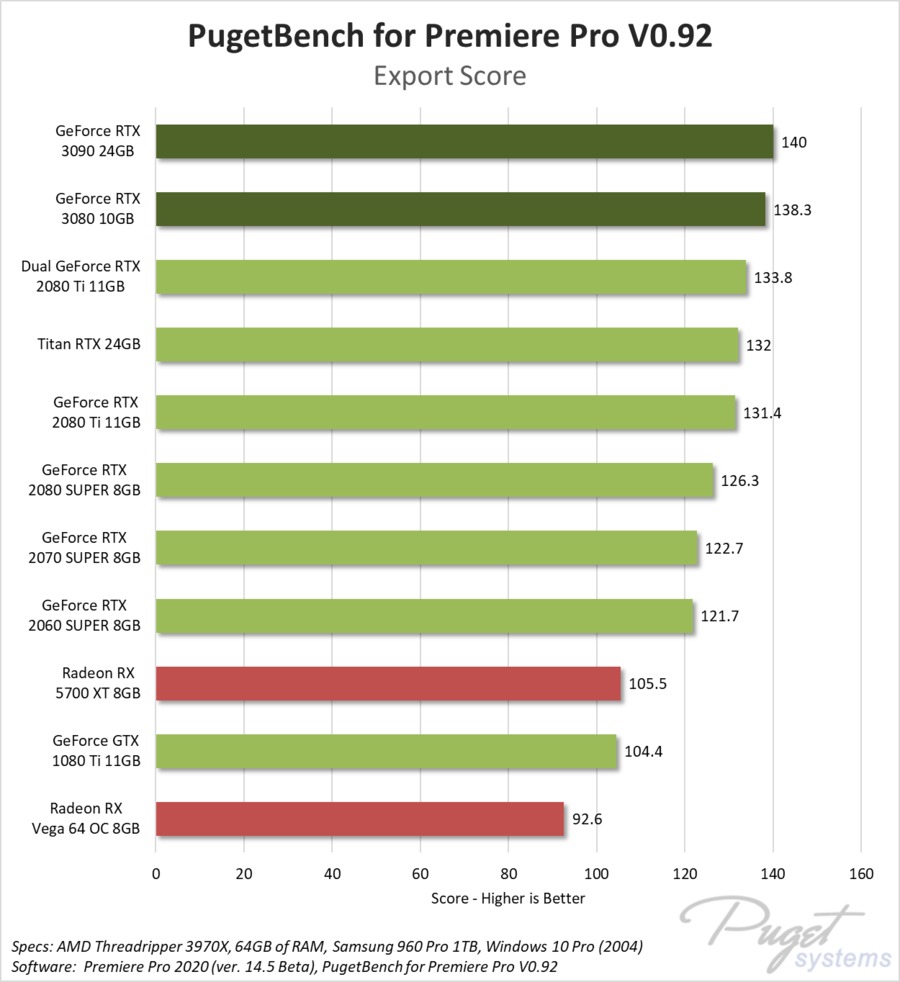 Looking at the Overall Standard Score, the new RTX 3080 and RTX 3090 do top the charts, but they effectively score the same as the Titan RTX, 2080Ti, and dual RTX 2080 Ti. This is a pretty good result for the RTX 3080 considering that it is less expensive than any of those options (often significantly so), but the 3% performance gain from the RTX 3090 is going to be hard for anyone to justify.

Even compared to the RTX 2080 SUPER, the 3080 and 3090 are only about 5-8% faster overall, which is just beyond the margin of error for this test. However, if you are still using an old GTX 1080 Ti, the performance gain is close to 30% which should result in noticeably better performance for most users.

Keep in mind that the scores shown in the charts above include quite a few tests that are heavily CPU limited. Playing ProRes and H.264 footage (currently) does not utilize the GPU, and neither does exporting to ProRes, which easily covers more than half the tests. This is still a fairly good indication of what the average Premiere Pro user may experience overall, but we can dive into specific situations where a more powerful GPU should net you more significant performance gains. 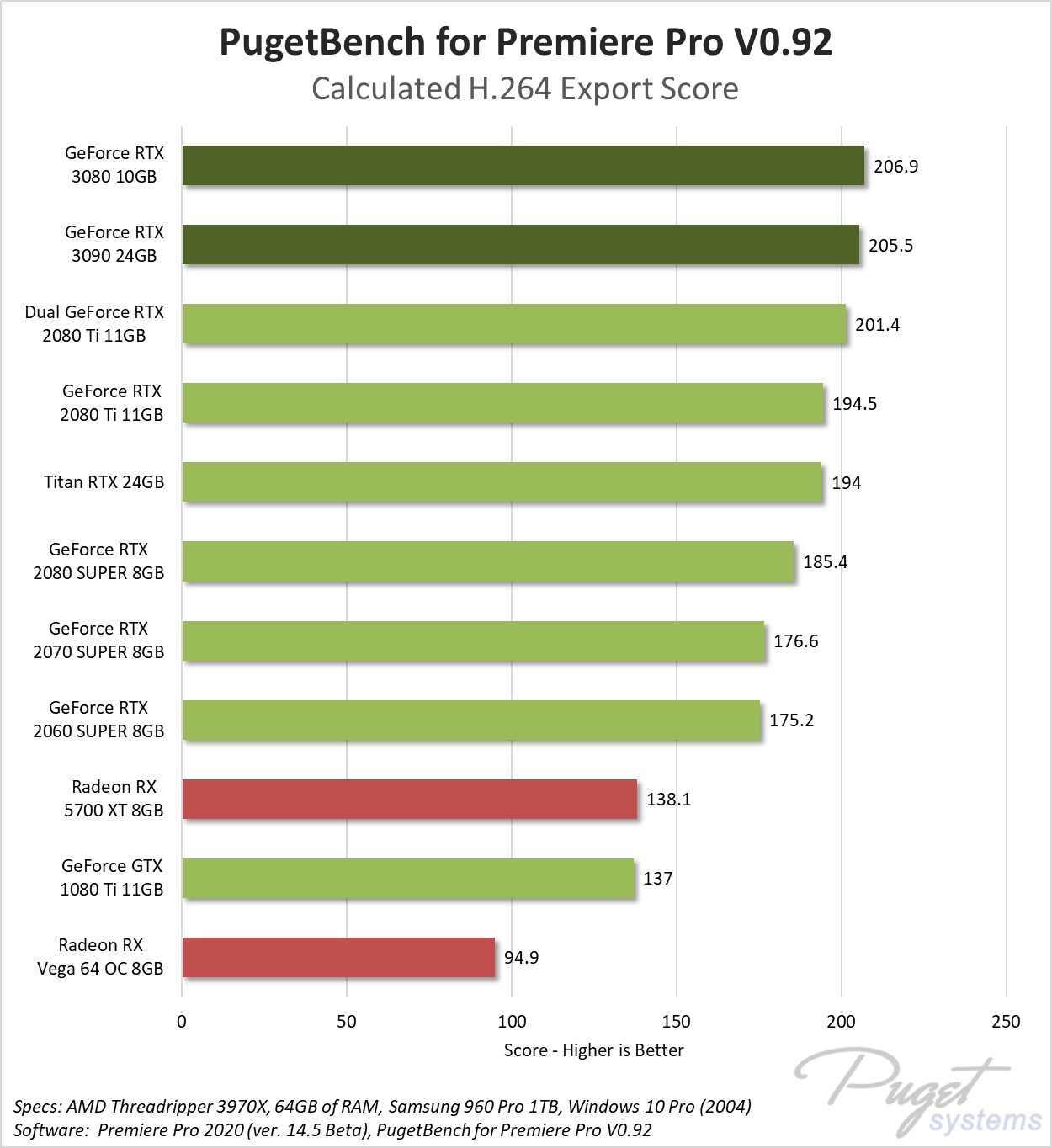 Here, the performance advantage of the new RTX 30-series cards is a bit larger, with both cards beating the RTX 2080 SUPER by 12%, the RTX 2080 Ti by 6%, and even edging out over the dual RTX 2080 Ti configuration by a small 3%. Once again, however, both the RTX 3080 and 3090 perform almost the same. They both are certainly much faster than the AMD Radeon GPUs or the older GTX 1080 Ti, but this is a feature that has a fairly dramatic soft cap to GPU performance so there is less to gain as you go up in raw GPU performance. 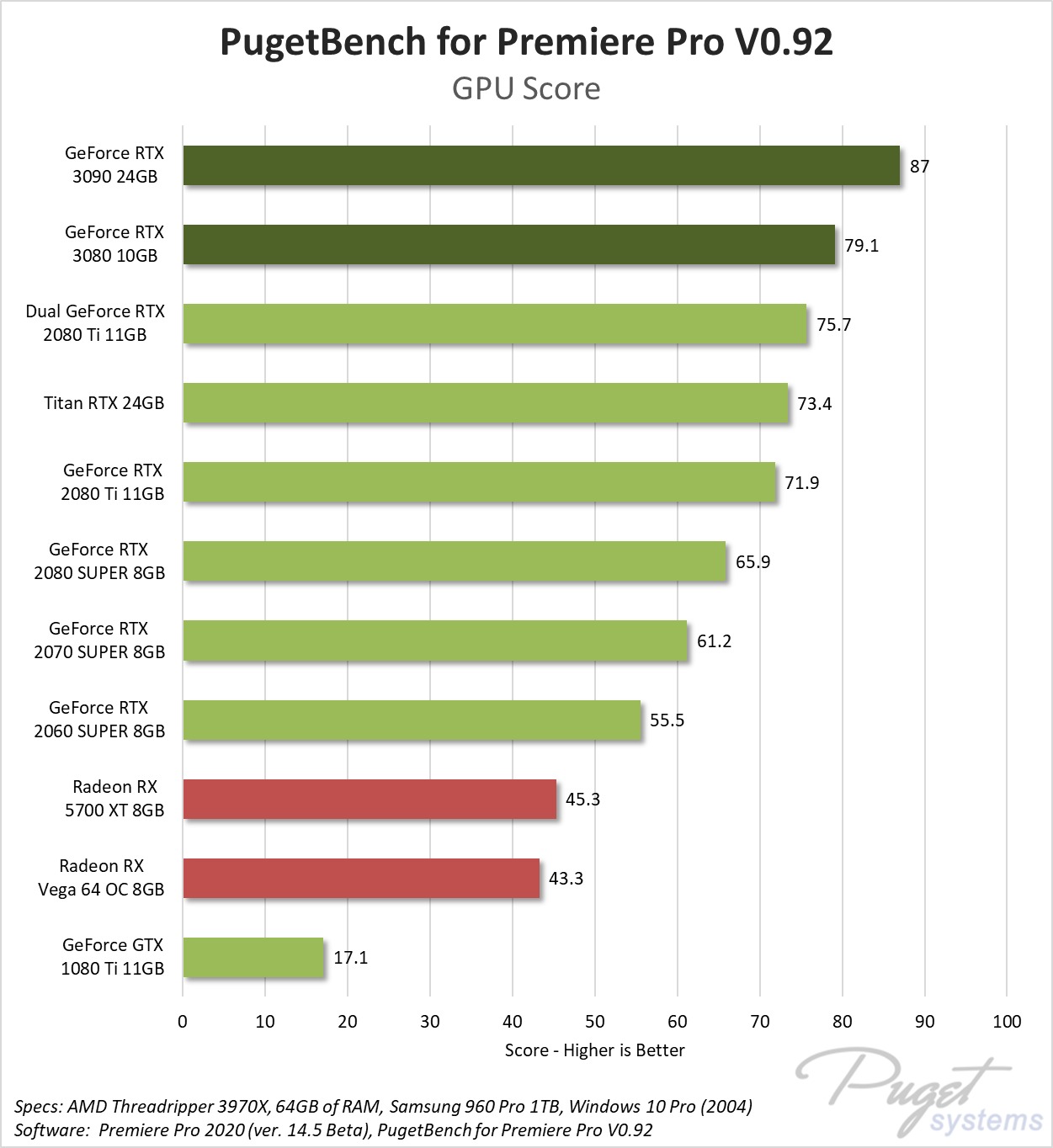 Compared to the more modest GPUs we tested, the performance gains can be very significant. The RTX 3080 and 3090 were more than 40% and 60% faster than the RTX 2060 SUPER respectively, and the RTX 3090, in particular, was close to twice the performance of the AMD Radeon RX 5700XT and Vega 64.

Overall, this makes the new RTX 3080 and 3090 an excellent option if you are configuring a new editing workstation, and can be a solid upgrade option depending on your workflow and what GPU you currently have. In general, the more GPU accelerated effects you use, the more of a benefit you will see with the more expensive RTX 3090 24GB card, but the extra VRAM also makes it a good idea if you want to work with 8K media. If you only work with 4K media, you may want to wait for the upcoming RTX 3070 which is slated to launch in October.

As always, keep in mind that these results are strictly for Premiere Pro. If you have performance concerns for other applications in your workflow, we highly recommend checking out our Hardware Articles (you can filter by "Video Card") for the latest information on how a range of applications perform with the new RTX 3080 and 3090 GPUs, as well as with different CPUs and other hardware.