While the average editor likely won’t notice much of a difference with the new NVIDIA GeForce RTX 3070, 3080 or 3090 video cards, in certain situations they can provide a healthy boost to performance. In an ideal situation where you are using multiple GPU-accelerated effects, the RTX 3000-series cards are anywhere from 10% to 20% faster than the similarly-priced models from the previous generation. This is enough to make both the RTX 3080 and 3090 easily the fastest GPUs we have tested for Premiere Pro regardless of price.

These new GPUs are also significantly faster than AMD’s current offerings, with the RTX 3070 and 3080 beating the AMD Radeon RX 5700XT and Vega 64 by around 50% and 75% respectively. The RTX 3090, while certainly more expensive than the AMD Radeon cards, is even more impressive with almost 2x higher performance in our GPU Stress project. 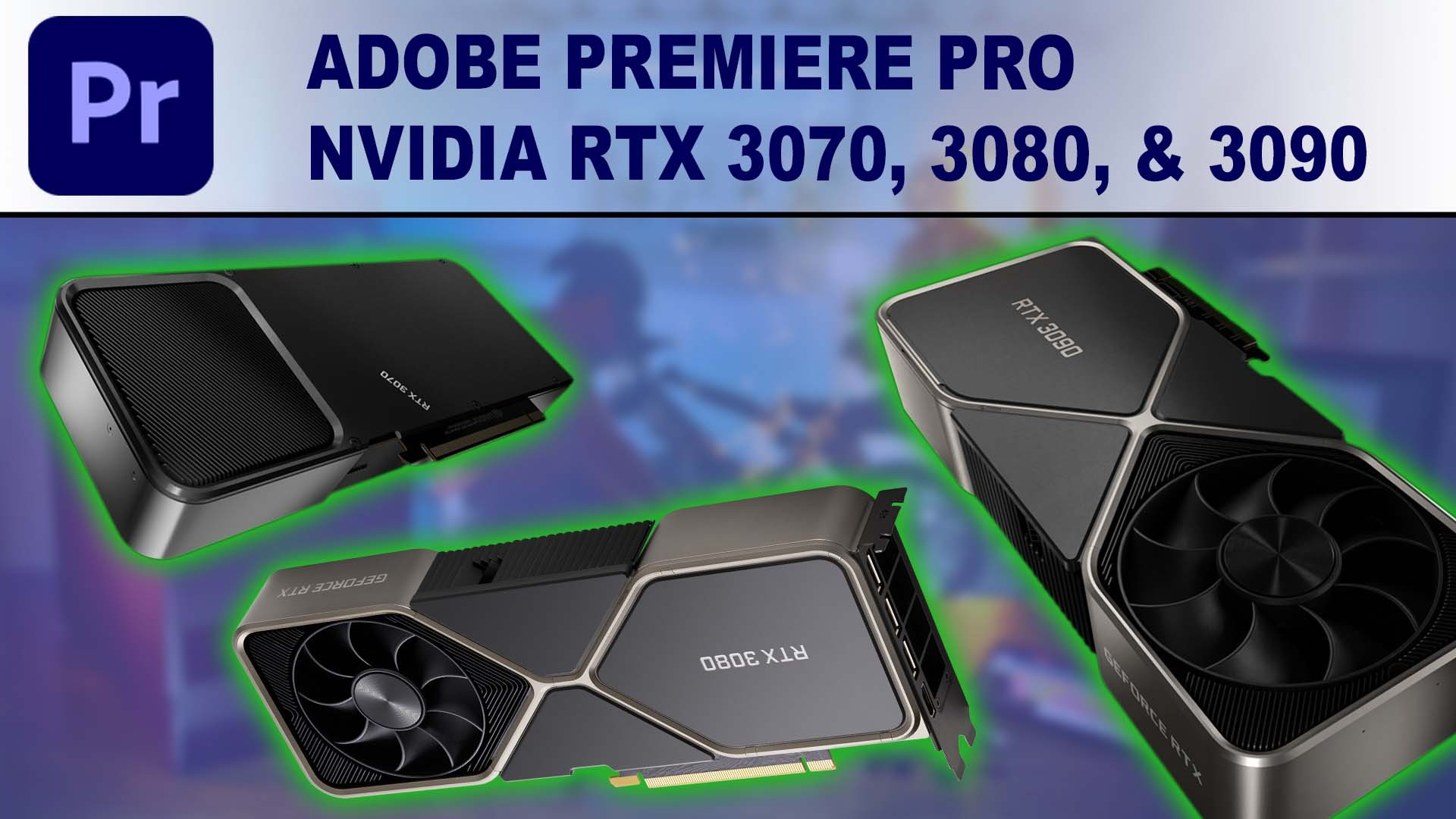 While it is a bit odd that the RTX 3080 has less VRAM than the 2080 Ti, all three of these new cards should all be capable of working with 4K timelines in Premiere Pro. The RTX 3080 and 3090 (with 10GB and 24GB of VRAM respectively) should also have no trouble with 8K timelines. However, keep in mind that the actual performance in those kinds of workflows is going to heavily depend on the power of your CPU as well.

One thing we need to specifically point out is that while we are using the latest 14.5 version of Premiere Pro which added GPU-based H.264/HEVC decoding, we actually saw significantly lower performance in our tests with this feature enabled. We have done some investigating and it appears to be largely limited to our multicam tests with the 150mbps 59.94FPS media.

Tasks like scrubbing, reverse playback, etc. are all still significantly better with the GPU decoding enabled which we showed recently in our Premiere Pro GPU Decoding for H.264/HEVC media – is it faster? article. In addition, multicam performance is better with the 23.976FPS H.264/HEVC media we've tested, so this appears to be an issue only with higher framerate footage. We are still investigating the cause of this lower performance, but for now we decided to disable GPU decoding for this round of testing. 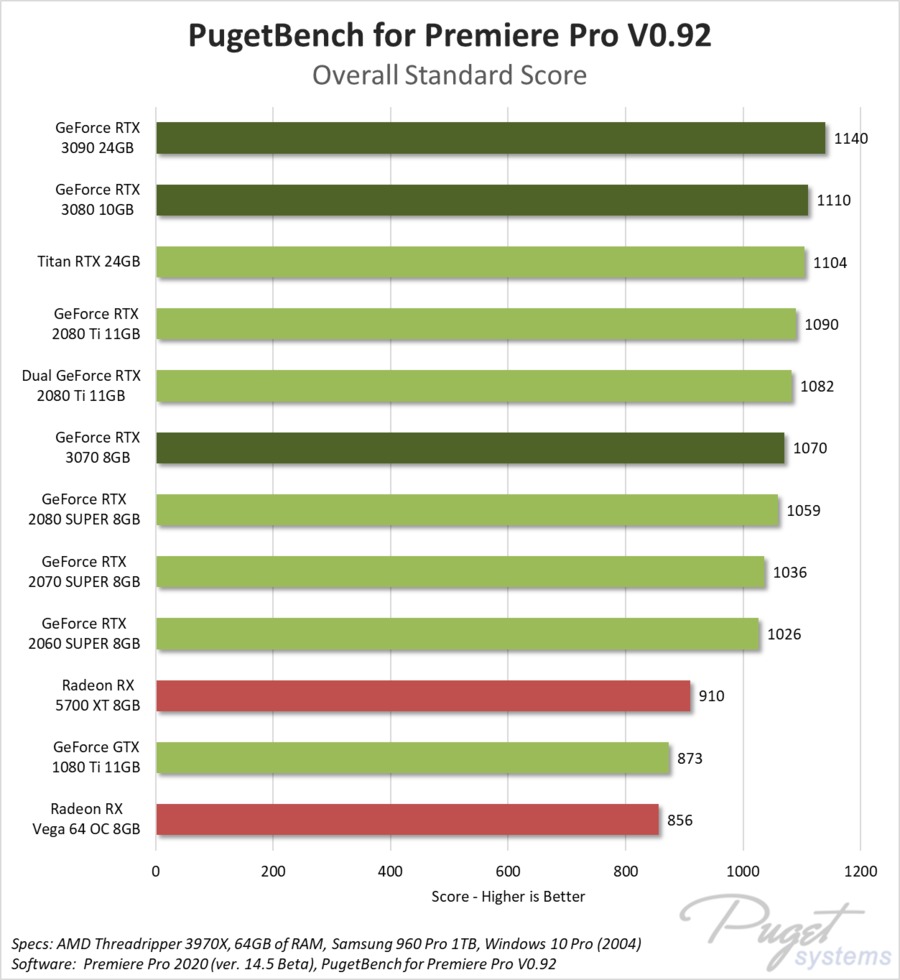 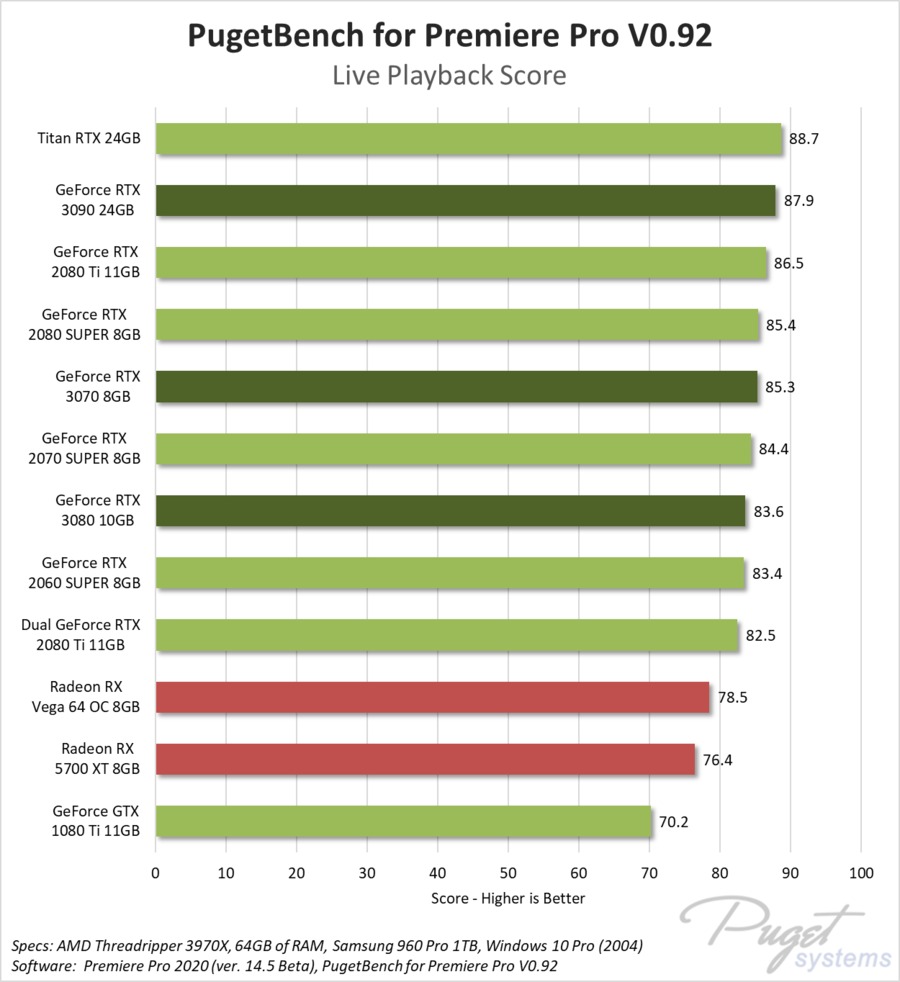 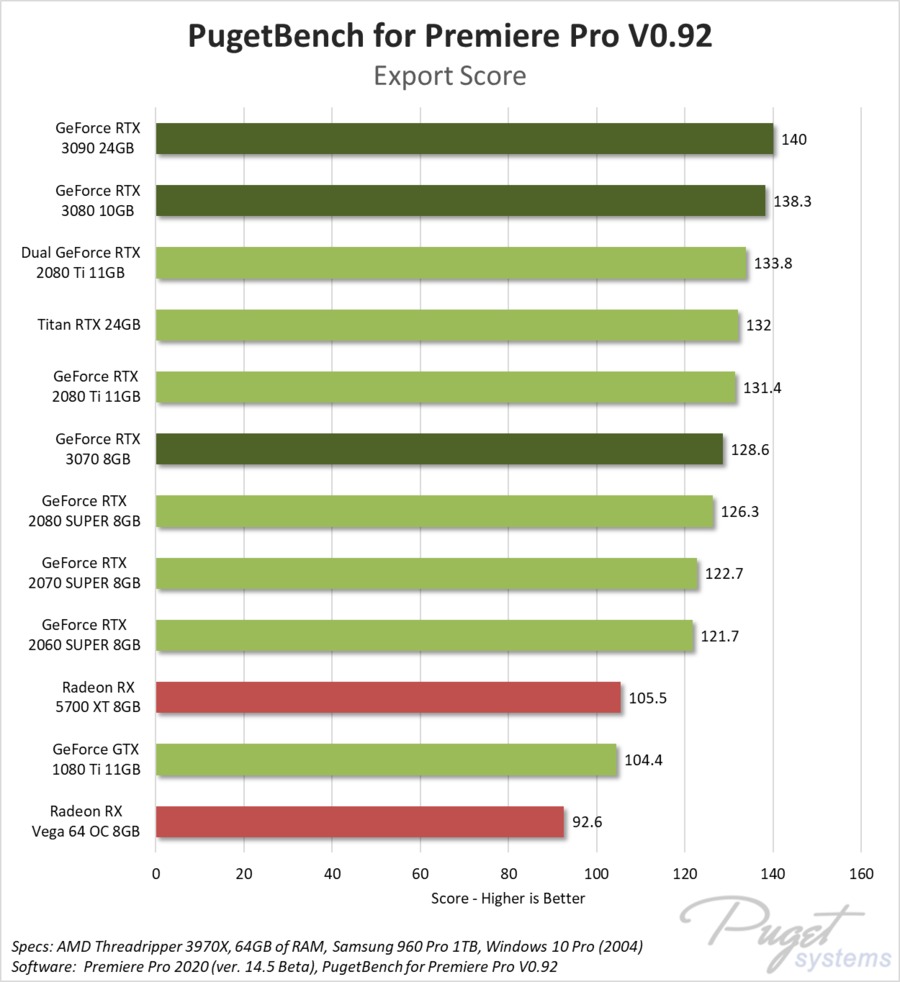 Compared to the previous generation cards of a similar price point, this works out to about a 3% performance gain with the new RTX 3000-series cards. This probably isn't enough to get you all that excited, but if you are still using an old GTX 1080 Ti, the performance gain is closer to 20-30% which should result in noticeably better performance for most users. 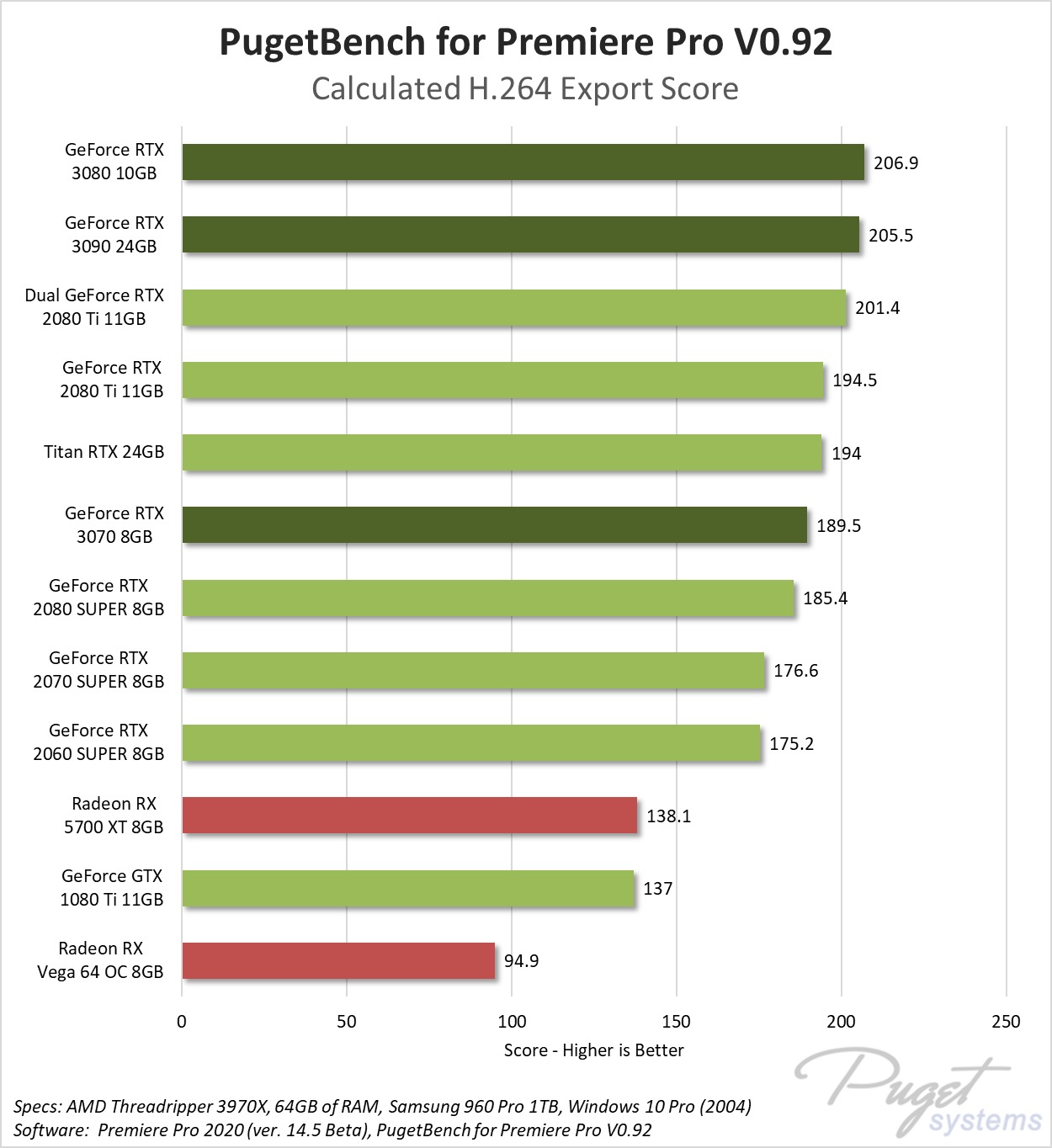 The 3000-series cards are all certainly much faster than the AMD Radeon GPUs that are currently available, or the older GTX 1080 Ti, but this is a feature that has a fairly dramatic soft cap to GPU performance so there is less to gain as you go up in raw GPU performance. 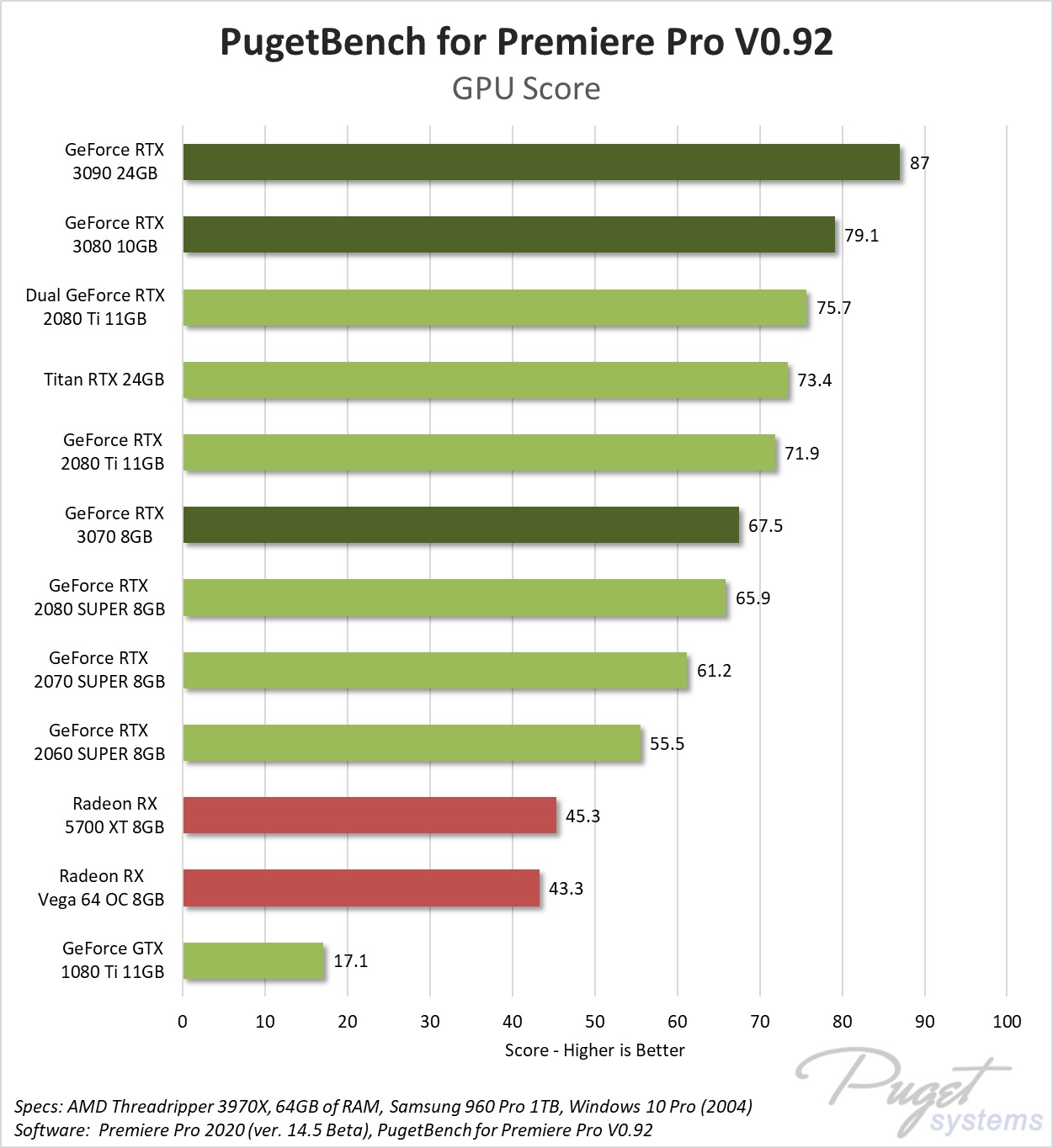 While the average editor likely won't notice much of a difference with the new NVIDIA GeForce RTX 3070, 3080 or 3090 video cards, in certain situations they can provide a healthy boost to performance. In an ideal situation where you are using multiple GPU-accelerated effects, the RTX 3000-series cards are anywhere from 10% to 20% faster than the similarly-priced models from the previous generation. This is enough to make both the RTX 3080 and 3090 easily the fastest GPUs we have tested for Premiere Pro regardless of price.

Overall, this makes the new RTX 3000-series cards an excellent choice for a Premiere Pro workstation. The RTX 3070 is a bit less impressive in terms of raw performance, but considering it performs between an RTX 2080 SUPER and an RTX 2080 Ti (both of which are more expensive), it is a solid choice for those on a budget.

If you use a number of GPU accelerated effects, want the fastest H.264 exports, or just want the best GPU overall, the RTX 3080 and 3090 are both terrific – easily beating all the GPUs from the previous generation. The RTX 3080 will likely end up being the more popular option given it's $699 price point, but the higher performance and 24GB of VRAM can make the RTX 3090 a solid investment if you want to work with 8K media.

As always, keep in mind that these results are strictly for Premiere Pro. If you have performance concerns for other applications in your workflow, we highly recommend checking out our Hardware Articles (you can filter by "Video Card") for the latest information on how a range of applications perform with the new RTX 3070, 3080 and 3090 GPUs, as well as with different CPUs and other hardware.