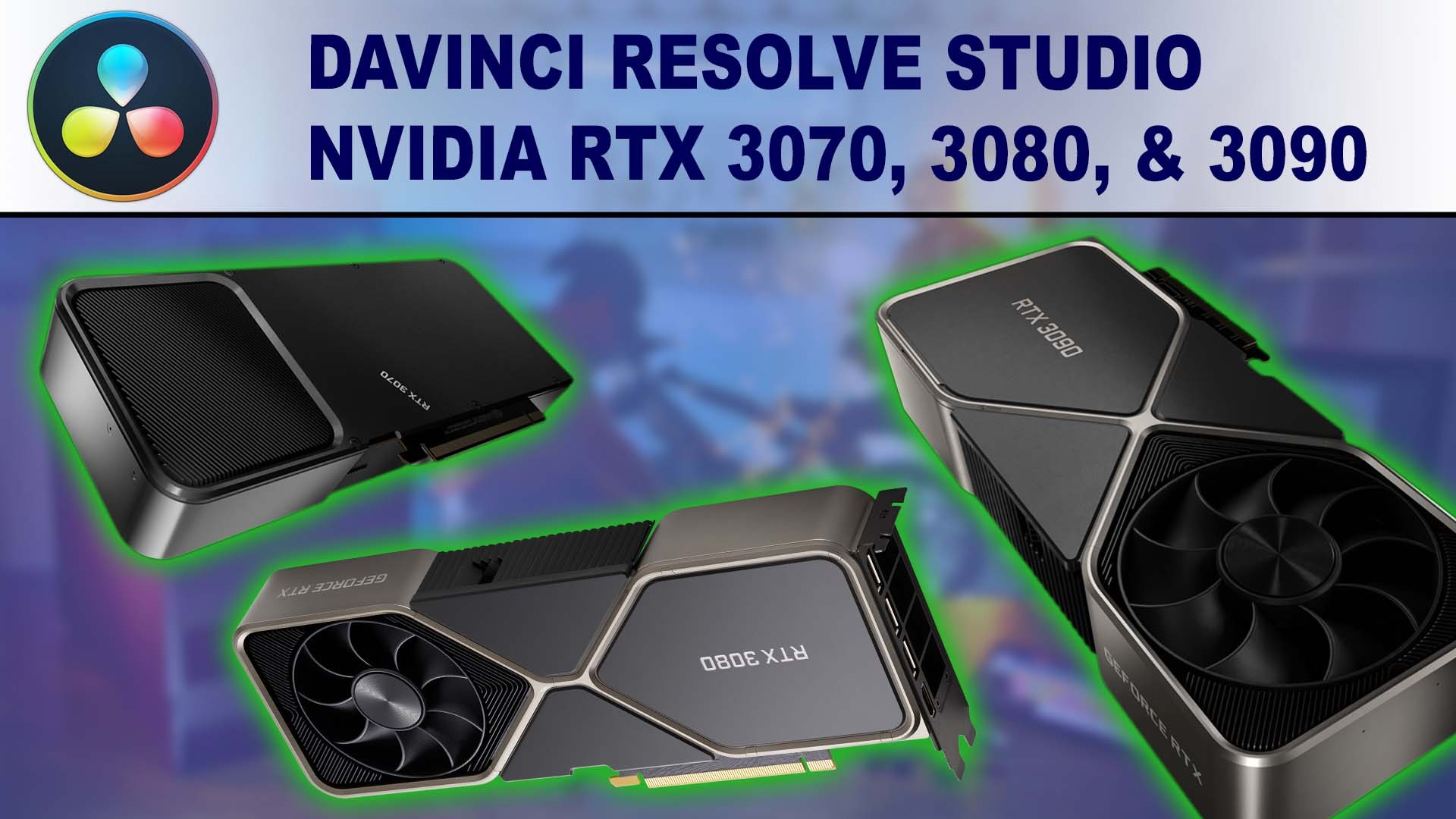 With the launch of the RTX 3070, we can update our previous DaVinci Resolve Studio – NVIDIA GeForce RTX 3080 & 3090 Performance article with results for the 3070. We also have a separate article focusing on multi-GPU performance in Resolve with these new cards. It is important to note that most of the currently available GPU models are not a good choice for multi-GPU configurations, so while the performance in that article should be accurate, we would highly recommend waiting for blower-style cards to be released before getting a system with multiple RTX 3000-series GPUs.

To test each GPU, we will be using the fastest platform currently available for DaVinci Resolve – most notably the AMD Threadripper 3970X. Since Resolve utilizes the CPU so heavily, this should minimize the impact of the processor and allow each GPU to perform at their fullest potential.

We will be using the "Extended" preset that includes both 4K, 8K media as well as specific GPU Effects and Fusion tests. Using 8K media with most of the cards we are testing is actually not a good idea due to the "out of GPU memory" errors you would likely encounter, but our benchmark does not load the Resolve UI which means that the VRAM load is much lower; allowing GPUs with just 8GB of VRAM to successfully complete the 8K tests. 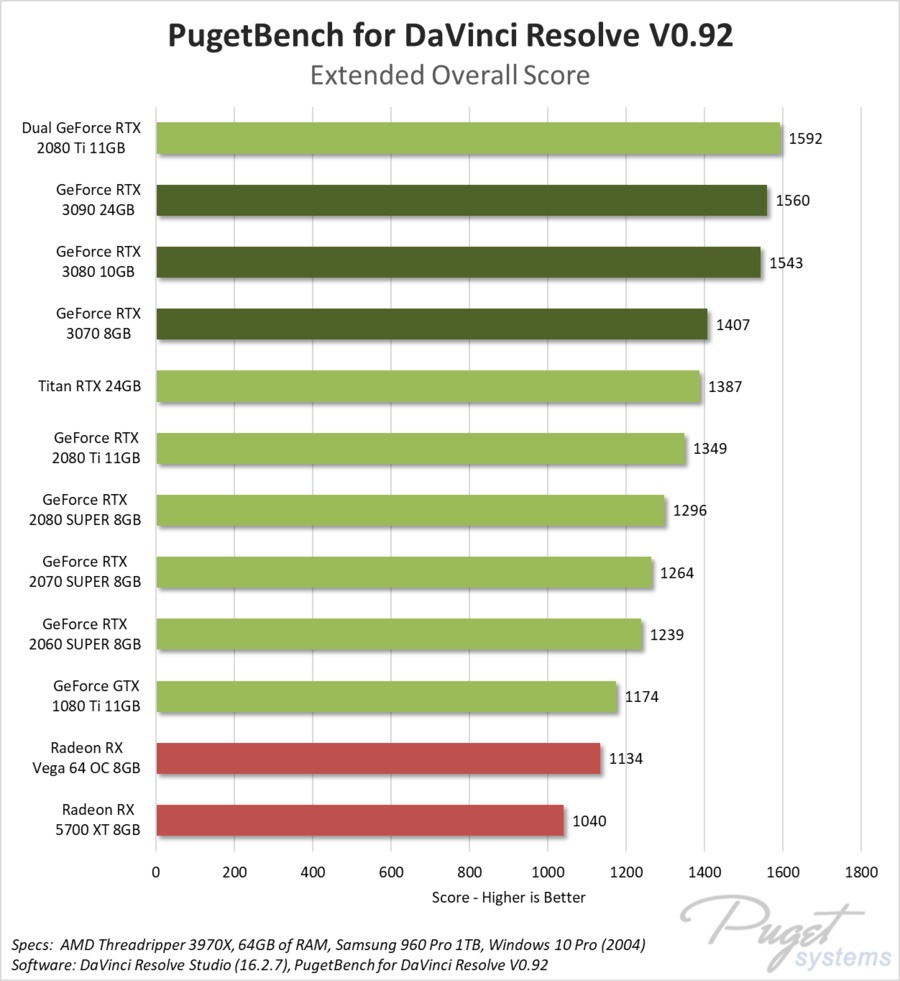 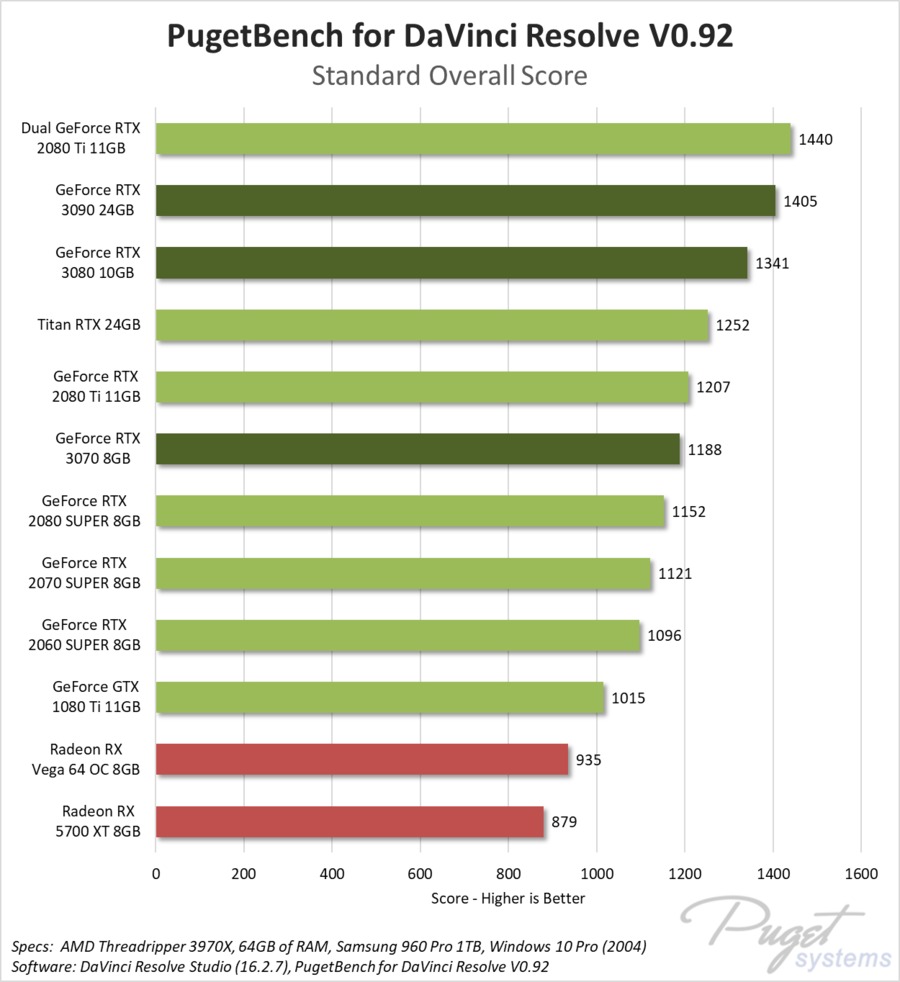 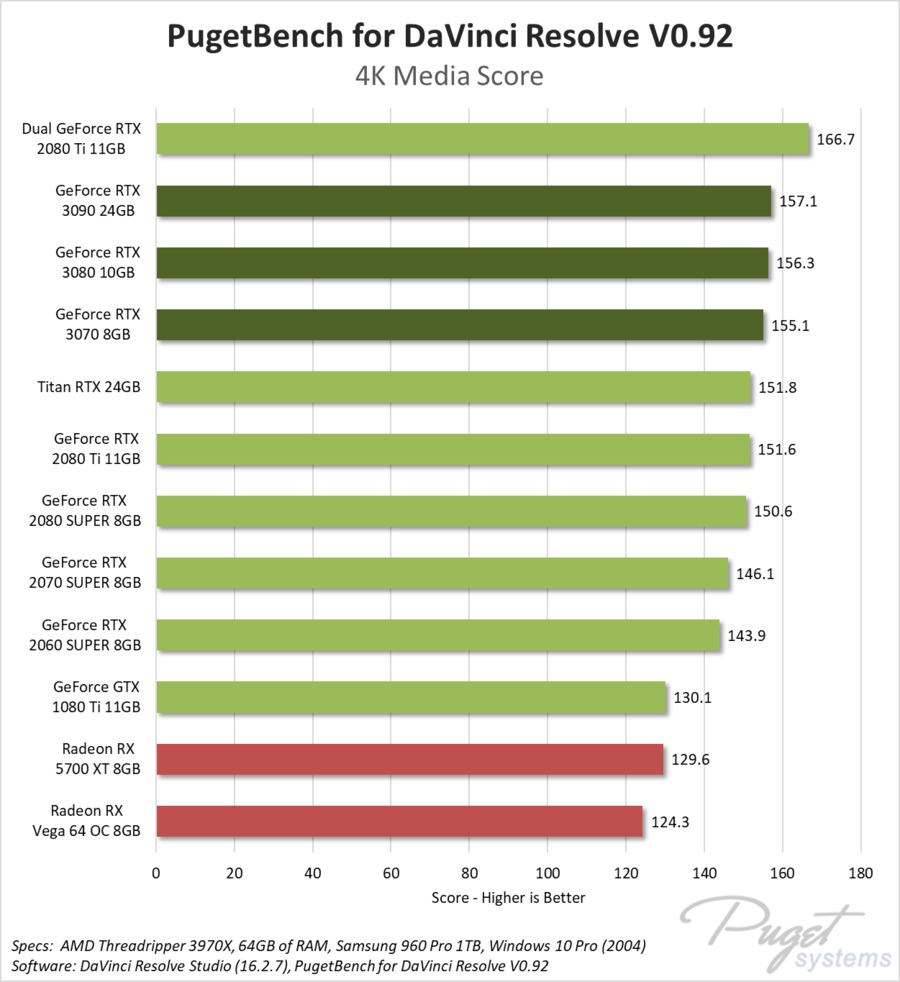 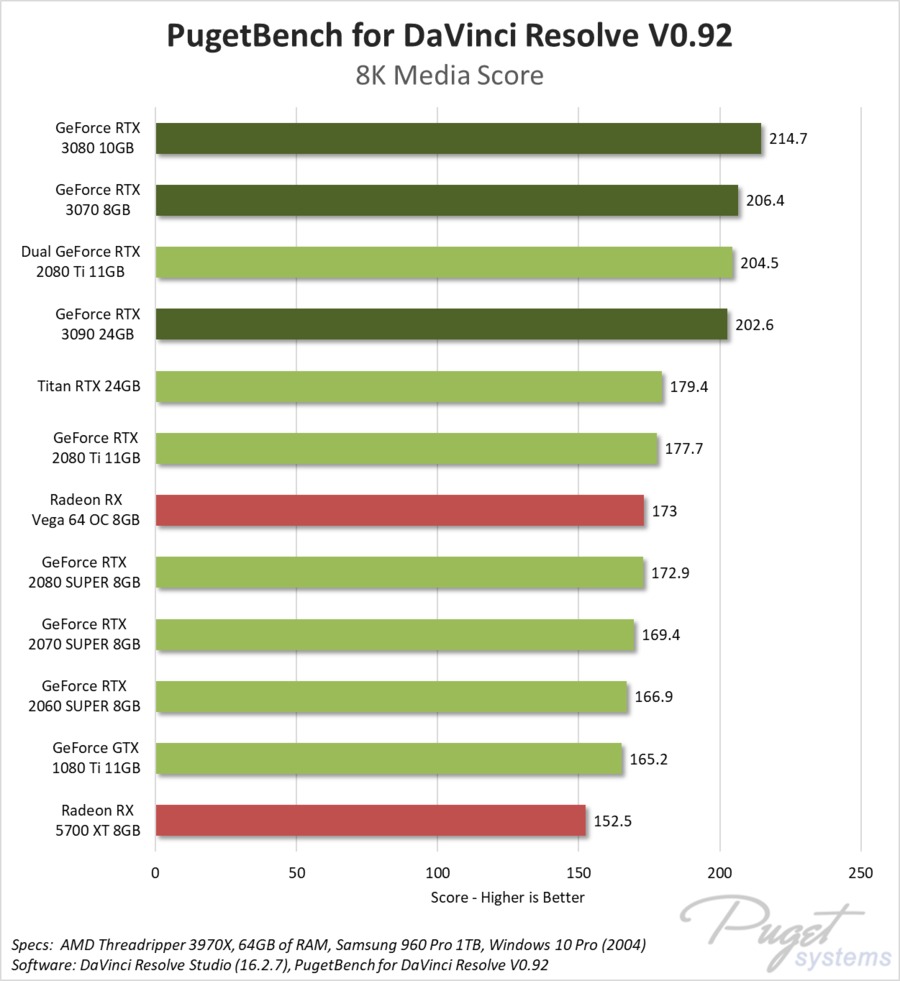 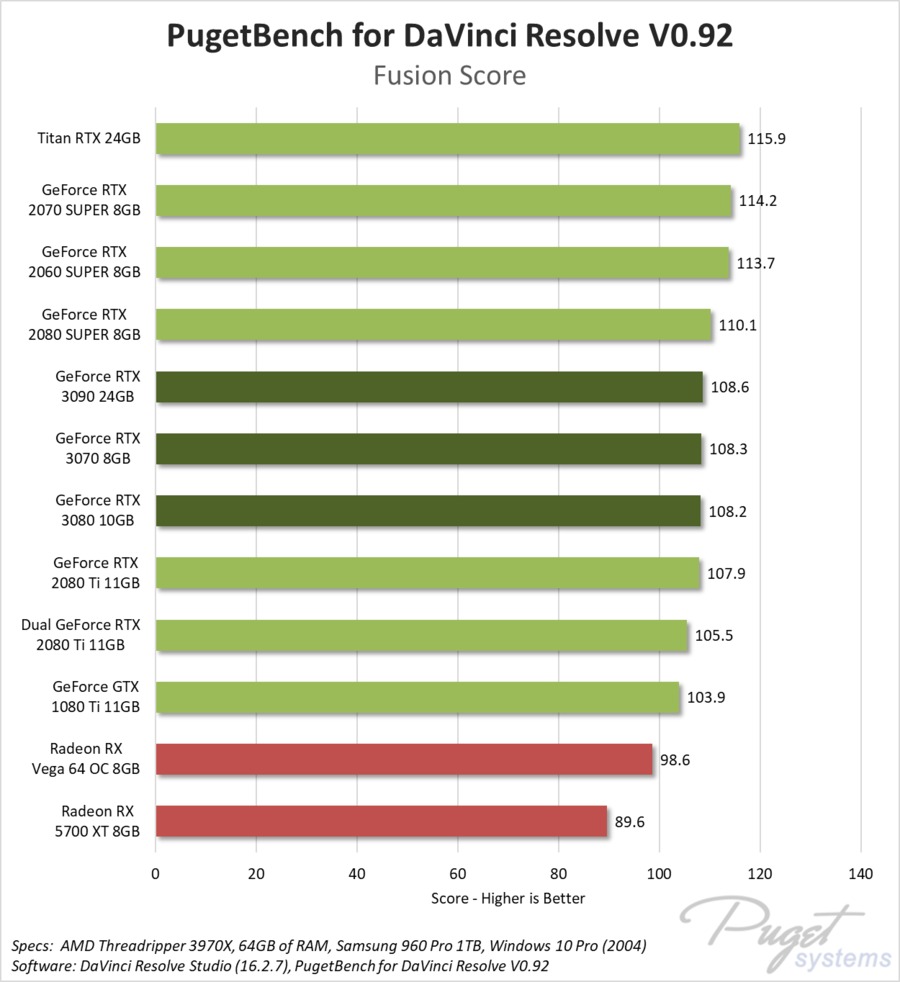 Looking at the Overall Extended Score, the new RTX 3000-series cards do very well, with even the RTX 3070 beating all the single GPU configurations from the previous generation. The RTX 3080 and 3090 even managed to sneak within a few percent of a dual RTX 2080 Ti setup!

If you are currently using a lower-end RTX card, an AMD Radeon GPU, or an older GTX 1080 Ti, the performance gains are even more significant. Depending on the exact card, you are looking at anywhere from a 20 to 50% increase in performance with the new RTX 3000-series cards.

Bear in mind that this looking at the Overall Extended Score which measures the performance in all of our tests – including the Fusion portion which is almost entirely CPU limited. To get a better idea of the maximum performance difference between these cards, we should hone in on the "GPU Effects" portion of our benchmark which looks at tasks like TNR and various GPU-accelerated OpenFX. 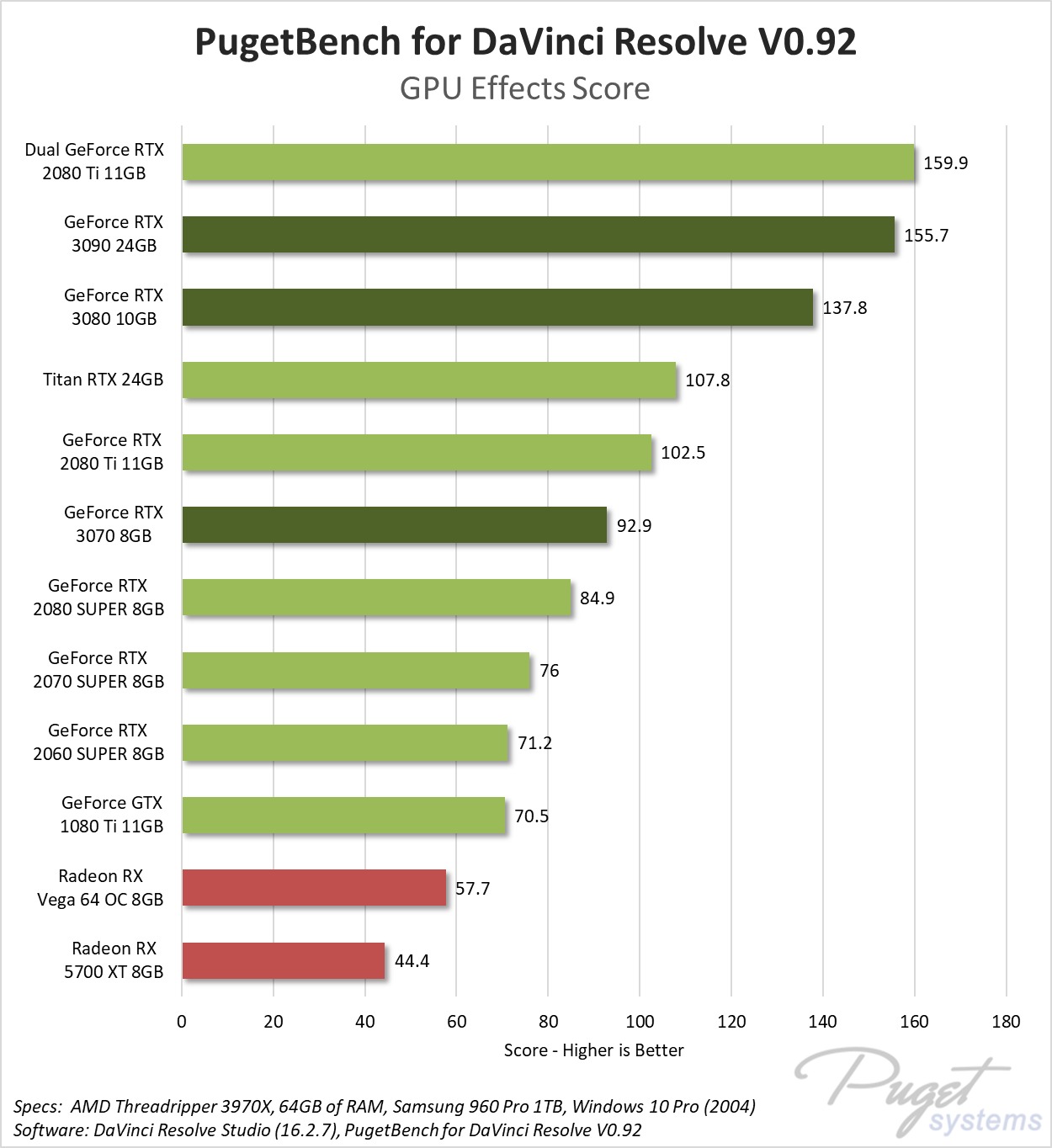 In this test, the new RTX 3000-series cards put up some very impressive numbers. The RTX 3080 is terrific for its cost, beating the similarly priced RTX 2080 SUPER by a whopping 62%. Compared to the more expensive RTX 2080 Ti and Titan RTX, the RTX 3080 also handily beats those cards by around 30%. Dual RTX 2080 Ti is still faster than a single RTX 3080, but even that configuration is only ~15% faster.

The odd man out is really the RTX 3070 which is only 22% faster than the previous generation RTX 2070 SUPER. Now, a 22% performance gain is absolutely nothing to scoff at and is very impressive, it just pales a bit in comparison to the 50-60% performance gain we saw with the RTX 3080 and 3090.

Compared to the lower-end RTX 20-series and GTX 1080 Ti cards, the new RTX 3000-series cards are like night and day. With the RTX 3080 and 3090 especially, you are looking at around a doubling of performance once you get down to the RTX 2060 SUPER or GTX 1080 Ti. And if you are considering moving from an AMD Radeon GPU to the RTX 3000-series cards, the performance gain is even more significant – up to 3x faster!

No matter what GPU you are currently using, these new cards are likely going to be a significant upgrade. Being able to get this much power from a single card, especially at these price points, is a big deal for DaVinci Resolve Studio users. Considering that a single RTX 3090 24GB is $1000 less than a Titan RTX and has close to the same performance as two RTX 2080 Ti 11GB cards, this also makes editing 8K media more accessible than ever before.

Of course, this article is focused on a single-GPU setup, with the dual RTX 2080 Ti only included to show how close these new cards get to the performance of two video cards from the previous generation. If you are considering a multi-GPU setup, however, we have you covered with our DaVinci Resolve Studio – RTX 3080 & 3090 Multi-GPU Performance Scaling article which looks at the performance with a triple RTX 3080 and dual RTX 3090 setup. That kind of setup is still in development waiting on the availability of blower-style cards, but the performance gain when using OpenFX or noise reduction is very impressive.

As always, keep in mind that these results are strictly for DaVinci Resolve Studio. If you have performance concerns for other applications in your workflow, we highly recommend checking out our Hardware Articles (you can filter by "Video Card") for the latest information on how a range of applications perform with the new RTX 3070, 3080 and 3090 GPUs, as well as with different CPUs and other hardware.