DaVinci Resolve is known in the industry as having excellent GPU-acceleration support - greatly benefiting from a powerful (or multiple powerful) video cards. This makes it very interesting in regards to NVIDIA's recently announced GeForce RTX 30 Series GPUs since NVIDIA has been pushing their GeForce line of cards more and more into the professional content creation space with their "Studio" program. Gaming may still be front and center during these launches, but we have high expectations for what these new GPUs will be able to achieve in a professional application like DaVinci Resolve. 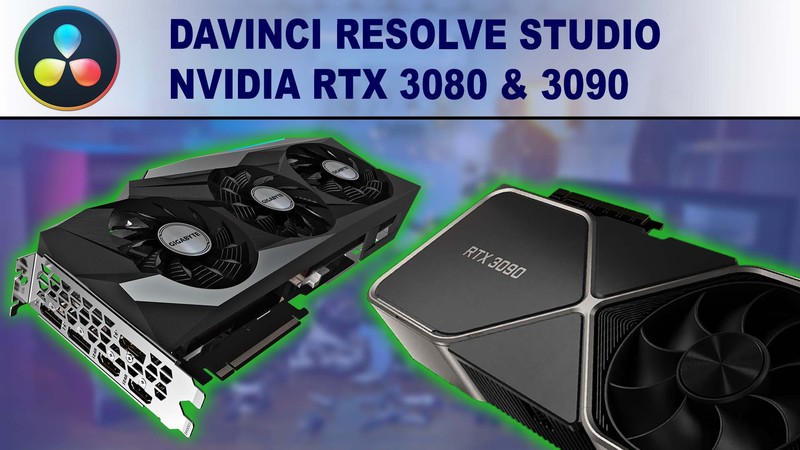 With the launch of the RTX 3090, we can update our previous DaVinci Resolve Studio - NVIDIA GeForce RTX 3080 Performance article with results for the 3090, but since the RTX 3070 is not launching until sometime in October, we cannot include it at this time. However, we are very interested in how the RTX 3070 will perform, and when we are able to test that card, we will post another follow-up article with the results.

We also have a separate article focusing on multi-GPU performance in Resolve with these new cards. It is important to note that all the currently available GPU models are not a good choice for multi-GPU configurations, so while the performance in that article should be accurate, we would highly recommend waiting for blower-style cards to be released before getting a system with multiple RTX 30-series GPUs.

If you are currently using a lower-end RTX card, an AMD Radeon GPU, or an older GTX 1080 Ti, the performance gains are significant. Depending on the exact card, you are looking at anywhere from a 20 to 50% increase in performance with the new RTX 3080 and 3090.

However, as you have probably noticed, there isn't much of a difference between the RTX 3080 10GB and the more expensive RTX 3090 24GB. The extra VRAM is certainly critical for 8K workflows, and even handy for more complex 4K timelines, but given the specs, you might expect more from the RTX 3090.

The issue here is that the Overall Extended Score is looking at the performance in all of our tests - including the Fusion portion which is almost entirely CPU limited. To get a better idea of the maximum performance difference between these cards, we should hone in on the "GPU Effects" portion of our benchmark which looks at tasks like TNR and various GPU-accelerated OpenFX. 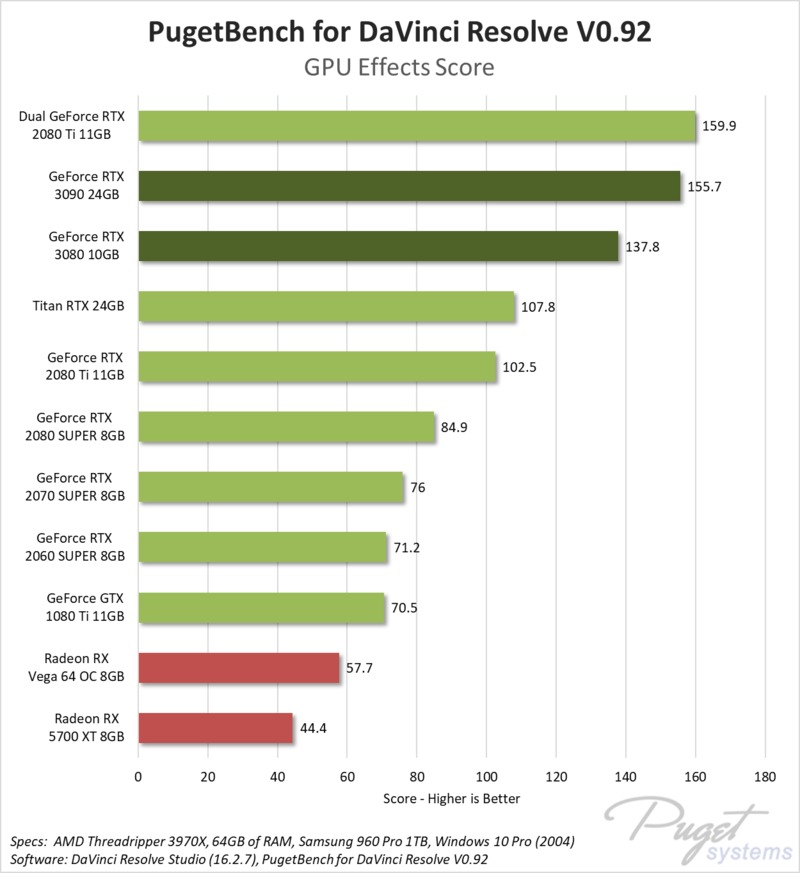 In this test, the new RTX 30-series cards put up some very impressive numbers. The RTX 3080 is terrific for its cost, beating the similarly priced RTX 2080 SUPER by a whopping 62%. Compared to the more expensive RTX 2080 Ti and Titan RTX, the RTX 3080 also handily beats those cards by around 30%. Dual RTX 2080 Ti is still faster than a single RTX 3080, but even that configuration is only ~15% faster.

Compared to the lower-end RTX 20-series and GTX 1080 Ti cards, the new RTX 30-series cards are like night and day. You are looking at around a doubling of performance once you get down to the RTX 2060 SUPER or GTX 1080 Ti. And if you are considering moving from an AMD Radeon GPU to the RTX 3080 or 3090, the performance gain is even more significant - up to 3x faster!

No matter what GPU you are currently using, these new cards are going to be a significant upgrade. Being able to get this much power from a single card, especially at these price points, is a big deal for DaVinci Resolve Studio users. In addition, dropping the price of the RTX 3090 24GB to $1,499 (which is $1,000 less than the Titan RTX 24GB) makes it much more affordable for those working with 8K media.

Of course, this article is focused on a single-GPU setup, with the dual RTX 2080 Ti only included to show how close these new cards get to the performance of dual video cards from the previous generation. If you are considering a multi-GPU setup, however, we have you covered with our DaVinci Resolve Studio - RTX 3080 & 3090 Multi-GPU Performance Scaling article which looks at the performance with a triple RTX 3080 and dual RTX 3090 setup. We will spoil it a little bit, however: there are significant problems with these cards in multi-GPU configurations.

As always, keep in mind that these results are strictly for DaVinci Resolve Studio. If you have performance concerns for other applications in your workflow, we highly recommend checking out our Hardware Articles (you can filter by "Video Card") for the latest information on how a range of applications perform with the new RTX 3080 and 3090 GPUs, as well as with different CPUs and other hardware.