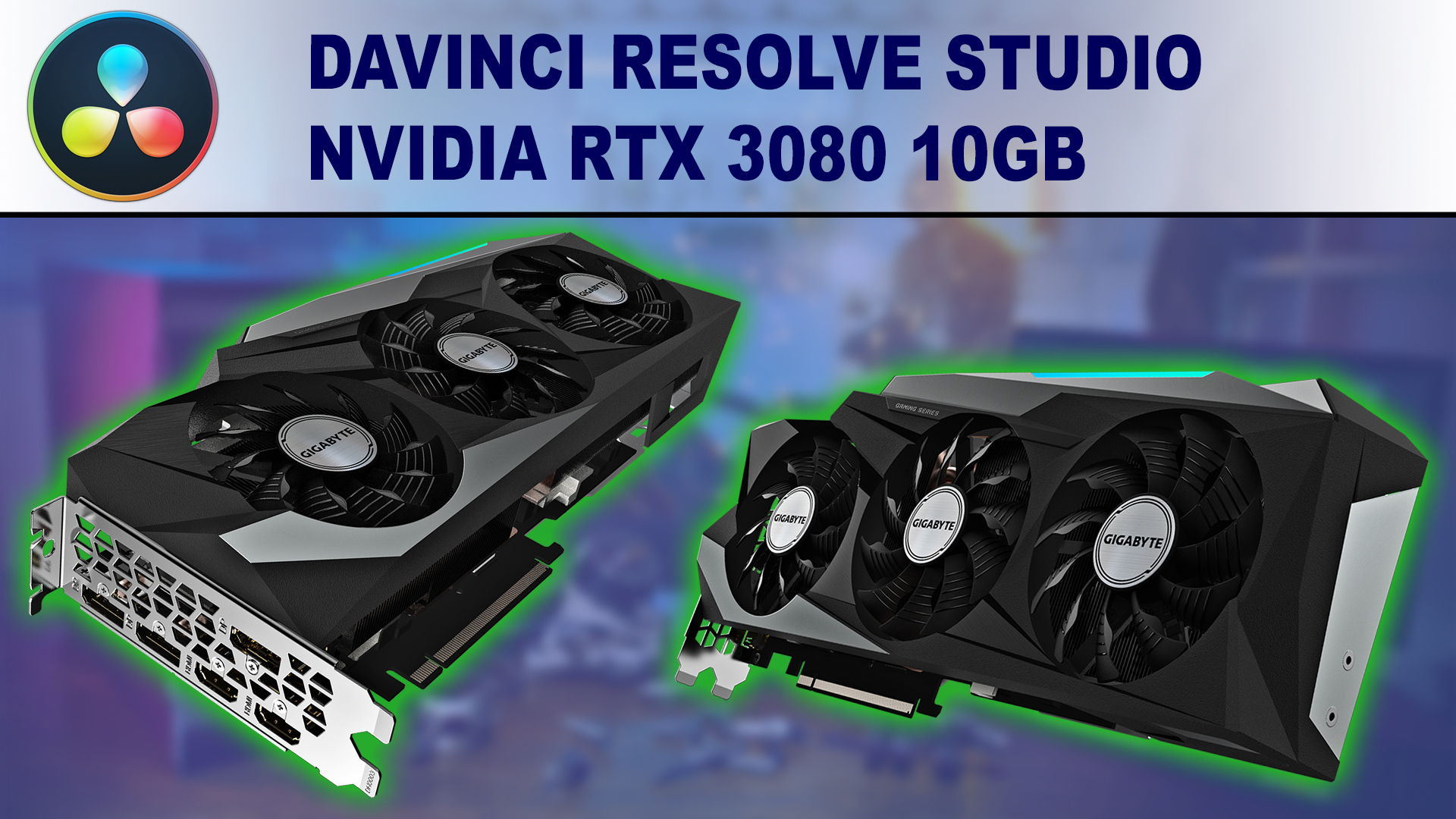 One thing we need to specifically point out is that we are using an un-released build of DaVinci Resolve due to a bug that prevents the current builds (including the 16.3 beta) from properly processing R3D media with the RTX 3080. This is a known issue, with the fix being implemented in this new build.

For the testing itself, we will be using another un-released bit of software – version .92 of our PugetBench for DaVinci Resolve benchmark. This new version is very close to being available to the public, but since the tests are much better than the version that you can currently download, we opted to go ahead and use it for this comparison. 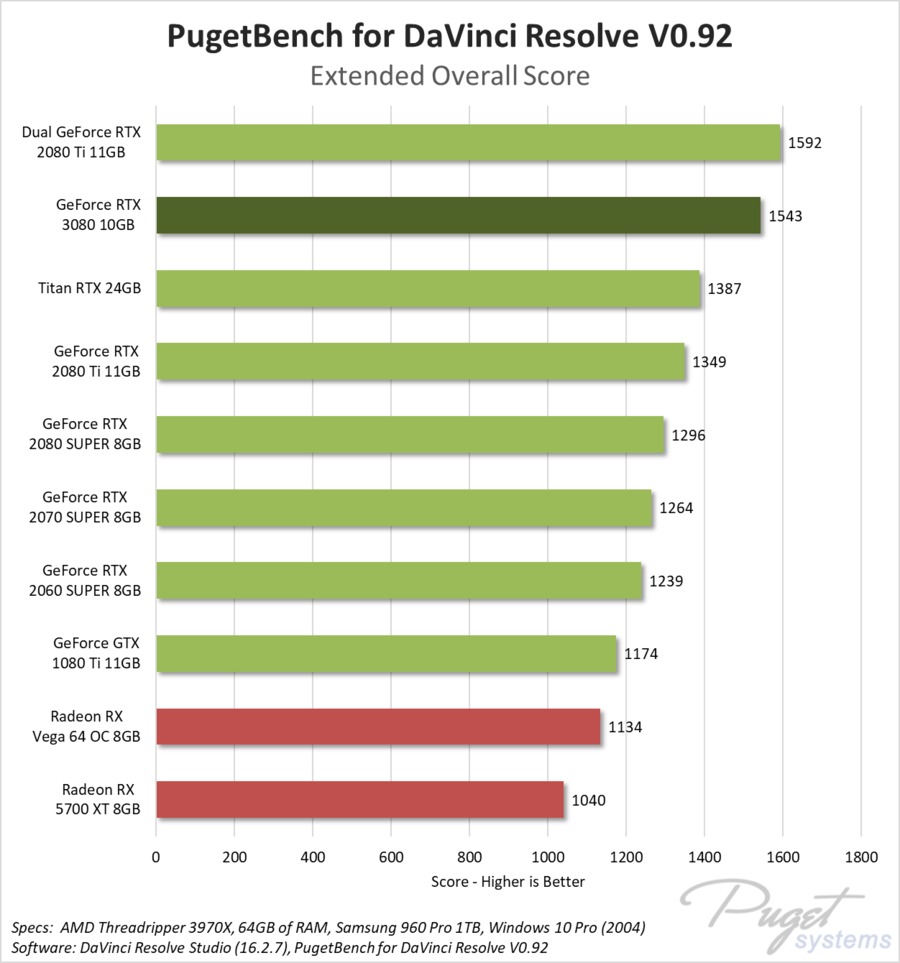 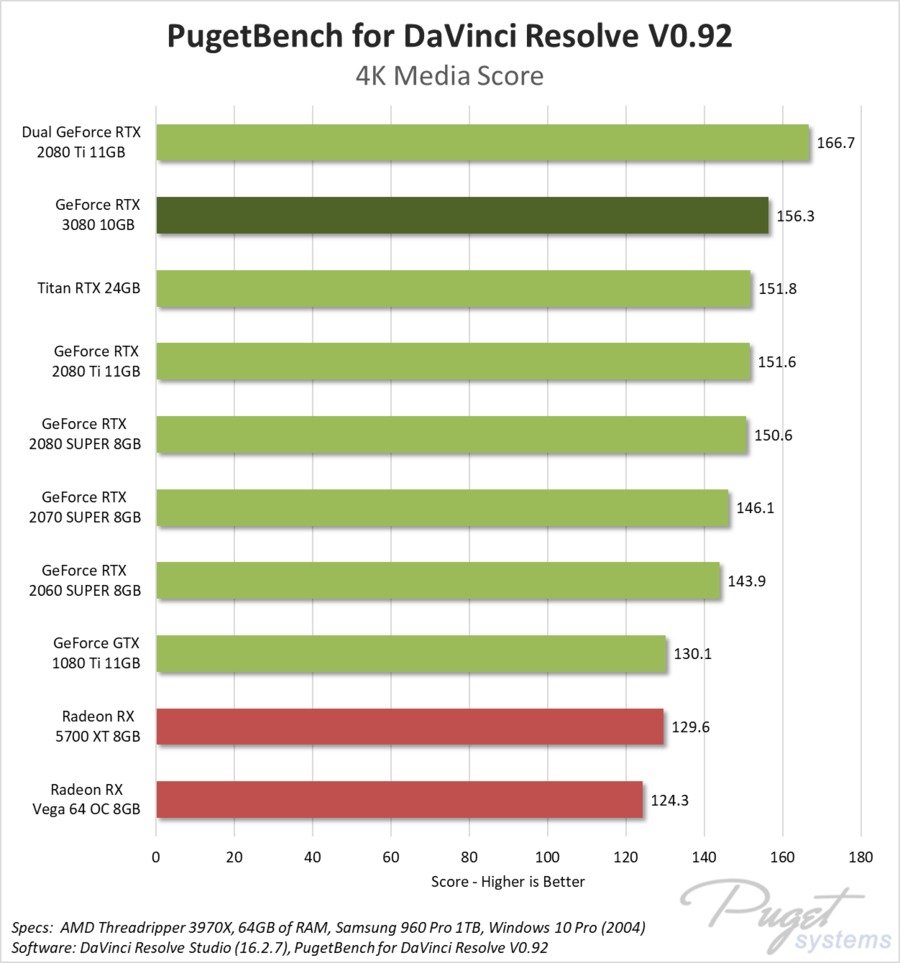 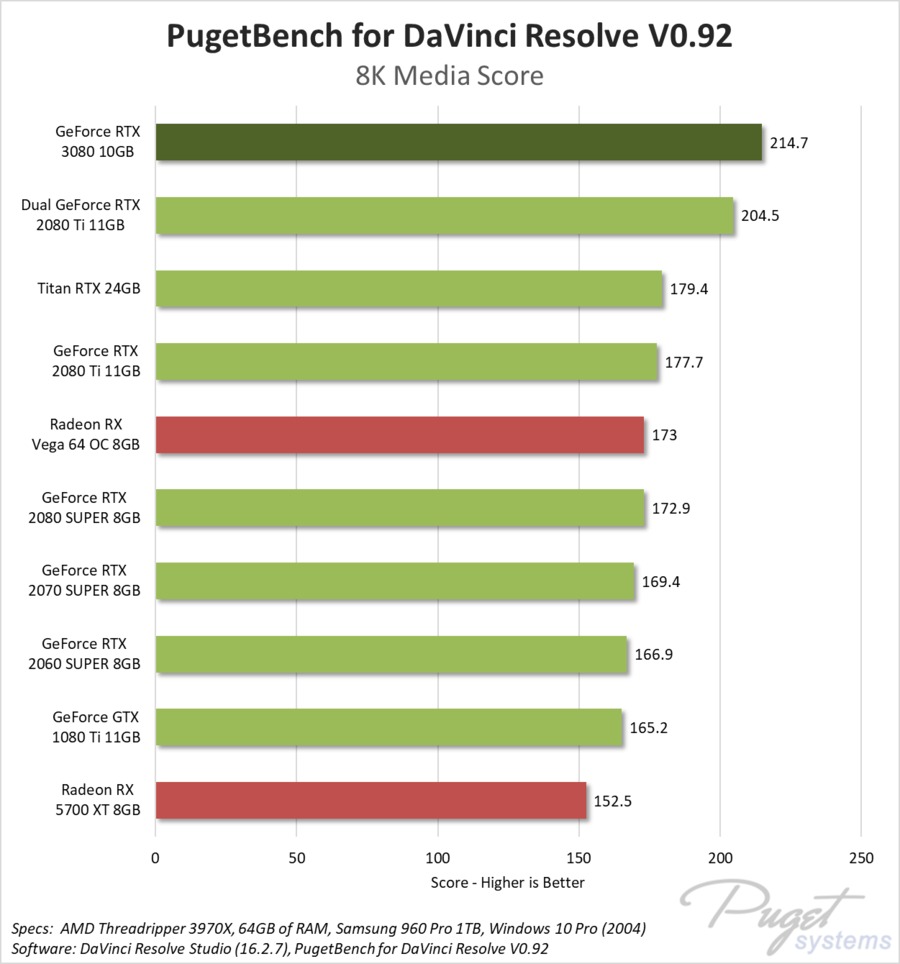 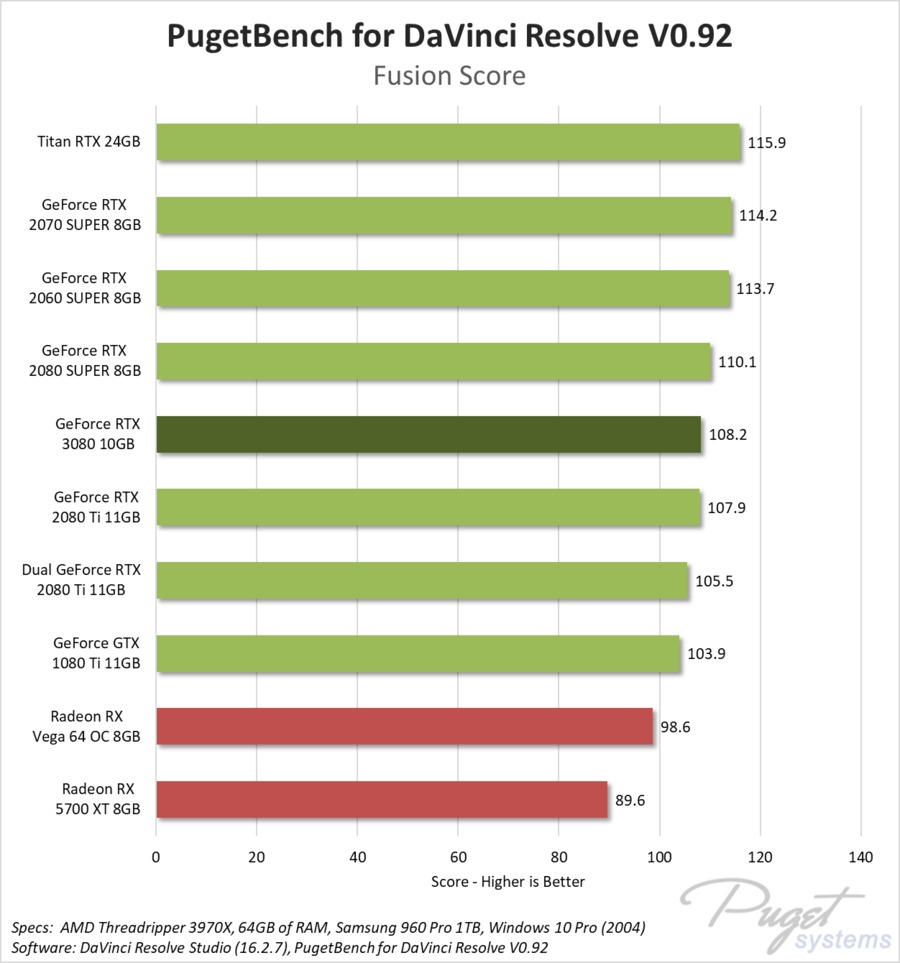 Looking at the Overall Extended Score, the new RTX 3080 does very well, beating the similarly priced RTX 2080 SUPER by about 20%. It also does very well compared to the more expensive RTX 2080 Ti and Titan RTX, out-performing those cards by 14% and 11% respectively. It even manages to trade blows with a dual RTX 2080 Ti setup, only losing by a few percent.

If you are currently using a lower-end RTX card, an AMD Radeon GPU, or an older GTX 1080 Ti, the performance gains are significant. Depending on the exact card, you are looking at anywhere from a 20 to 50% increase in performance with the new RTX 3080.

However, this is looking at all our tests – including the Fusion portion which is almost entirely CPU limited. To get a better idea of the maximum performance difference between these cards, we should hone in on the "GPU Effects" portion of our benchmark which looks at tasks like TNR and various GPU-accelerated OpenFX. 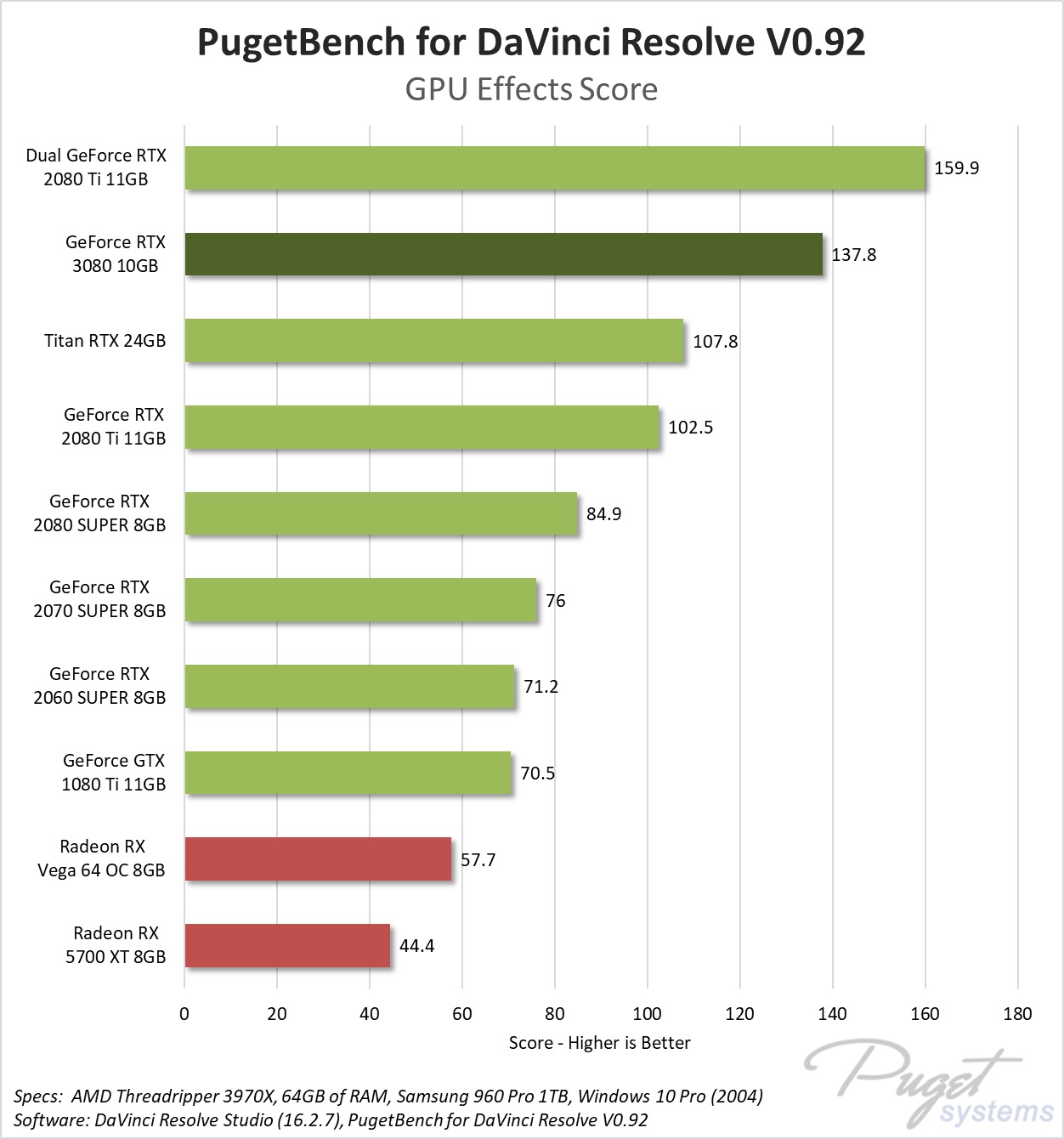 In this test, the RTX 3080 puts up some very impressive numbers, beating the similarly priced RTX 2080 SUPER by a whopping 62%. This is a massive increase in performance that, in most cases, make the older RTX 20-series cards obsolete.

Compared to the more expensive RTX 2080 Ti and Titan RTX, the RTX 3080 also handily beats those cards by around 30%. Dual RTX 2080 Ti is still faster than a single RTX 3080, but as they are only ~15% faster, this is a good indicator that the upcoming RTX 3090 may be able to match or beat a dual GPU setup from the previous generation. Be sure to check back after the RTX 3090 launches on 9/24/2020 to see exactly how that card performs!

Compared to the lower-end RTX 20-series and GTX 1080 Ti cards, you are looking at up to almost a doubling of performance once you get down to the RTX 2060 SUPER or GTX 1080 Ti. And if you are considering moving from an AMD Radeon GPU to the RTX 3080, the performance gain is even more significant – up to 3x faster!

How well does the NVIDIA GeForce RTX 3080 perform in DaVinci Resolve Studio?

Overall, the new RTX 3080 does extremely well in DaVinci Resolve. Performance while editing and doing basic grades may only be 10-25% faster than the previous generation RTX 20-series cards, but when doing noise reduction or using OpenFX, the performance gap widens from a minimum of 30% faster compared to a Titan RTX to almost 2x faster compared to an RTX 2060 SUPER!

This puts a single RTX 3080 10GB within spitting distance of a dual RTX 2080 Ti 11GB setup, which considering that is comparing a $699 GPU to a $2,400 pair of cards is very exciting. It also makes us excited to see what the RTX 3090 24GB can do after it launches on September 24th. If that card can match or beat a dual GPU setup from the previous generation, this could open to doors to significantly faster, more capable, and cheaper workstations for DaVinci Resolve.

One thing we want to point out is that the testing in this article was all done with a single RTX 3080 video card. We are very interested in doing multi-GPU testing with these new RTX 30-series cards since the new cooling designs make us concerned for the viability of multi-GPU configurations. Unlike the previous generation, these new cards (including all the third-party models we have seen so far) do not vent a significant portion of their heat directly outside the chassis which may mean that using more than 2 GPUs will not be feasible without a complex and expensive liquid cooling setup.

Given what we have seen from the RTX 3080, we doubt that you will be able to get a faster setup using the older cards even though you could stack four of them in a system, but it is possible that the maximum performance possible from a single workstation will not actually increase all that much even though these new cards are so much more powerful on an individual basis. Once the RTX 3090 has launched and we get our hands on multiple cards to test, expect to see a number of articles revolving around multi-GPU configurations.

As always, keep in mind that these results are strictly for DaVinci Resolve. If you have performance concerns for other applications in your workflow, we highly recommend checking out our Hardware Articles (you can filter by "Video Card") for the latest information on how a range of applications perform with the new RTX 3080 GPU, as well as with different CPUs and other hardware.