Skip to content
Always look at the date when you read an article. Some of the content in this article is most likely out of date, as it was written on August 30, 2011. For newer information, see our more recent articles. 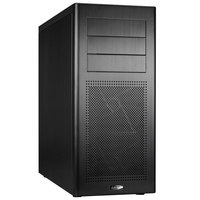 The PC-K9B is a mid tower chassis from Lancool's "First Knight" series. It is available in black, silver and a black version with a painted black interior. For this qualification, we will be reviewing the basic black version.

This chassis is fairly standard for a mid tower chassis, although Lancool has decided not to offer an external 3.5" bay in this version. This may force some users to use a 5.25" to 3.5" bay adapter in order to use 3.5" devices such as card readers. The chassis features tool-less design for the mounting of PCI cards, 3.5" drives and 5.25" drives. If you are the kind of user that likes to constantly tinker with their system, this might be a very attractive feature. The included fans are fairly average, although they are a bit louder than we would like for the amount of airflow they provide.

The exterior of this chassis is about as simple as you can get. On the front of the chassis, there are three 5.25" bays, the power and hard drive LEDs, and the grill for the front intake fans. The front panel is removed by simply grabbing the bottom of the panel and pulling it off. Once it is removed, you have access to the front fan filters as well as the 140mm front fan screws.

On the top of the chassis are the front ports (2x USB 3.0 and audio in/out) and the power/reset switches.The top panel can be removed by unscrewing four screws (two in the front and two on the rear), giving easy access to the front ports and switches if they ever need to be replaced.

From the top panel, we can also see that there is no top fan mount, meaning that this case will not work well for closed-loop liquid cooling solutions which require an additional exhaust fan for optimal cooling.

The rear of the chassis is very standard, with the rear fan screws, PCI slots and IO panel all being in the normal location as well as a pair of grommets for liquid-cooling pass through. The screws holding the tool-less PCI retention device are also accessible here if you ever want to remove the PCI retention.

On the bottom of the case, you have access to the PSU fan filter. You can also see the very thick rubber feet that should help cut down on vibration noise between the case and the ground/desk.

At the front of the chassis are the two 3.5" drive cages which has slides for three 3.5" drives and one 2.5" drive each. Both cages are removable, giving access to the front 140mm fans. To install a hard drive, you install a large thumbscrew with a rubber grommet into each of the four mounting holes on the hard drive. After that, you simply slide it in, and secure the latch on the left side of the cage which is held in place with another thumbscrew.

While this type of mounting will work fine for the majority of users, we have serious doubts about it being 100% secure during shipping. Only one side of the drive rail is secured, and even then has about a 1/8" of play to it. This means that the drive can twist quite a bit, giving it enough momentum to potentially warp the cage slightly out of shape. The drive should not ever come completely out of the cage even if the cage becomes warped, but judging from some of the incredible shipping damage we've seen over the years, it is a possibility.

The power supply is mounted on top of a short stand that is covered with rubber. The case has vents in the bottom to allow the PSU to draw fresh air directly from outside the case, although the vents are pretty restrictive. We would much rather see the same type of honecomb used on the rear fan since the more restrictve the vent, the harder the power supply fan has to work.

The chassis comes with a large retention bracket to help hold the power supply down. Really though, this bracket is really only useful to help hold the PSU during transport, but the clip holding it in place would likely come undone during shipping, rendering the clip ineffectual.

The motherboard tray is not removable, and includes just enough standoff locations for standard mini-itx, micro-ATX and ATX motherboards. There are cutouts for the CPU heatsink as well as a few at the top and bottom of the tray to assist with cable routing.

PCI cards are secured using a series of levered latches, which while very convenient in some instances, would in no way survive shipping. They are easily removable, but since they add to the cost of the chassis, it would be a bit unfortunate to pay for something that is not used. This type of latch will also have problems with some video cards that have large heatsinks which may get in the way of these latches.

Overall, this chassis would not be a bad choice for someone who wants a chassis that is not super flashy and has decent cooling. The included fans are decent, although we would recommend upgrading the fans if you are planning on installing high-end hardware.

Like so many chassis on the market today, the biggest factor holding us back from offering this case in our product line at Puget Systems is all of the tool-less mounting features. For an end-user, they can be great features for those who are either constantly tinkering with their system or those who just want an easier time assembling their system. We need to ship our systems over long distances however, and tool-less mounting simply does not often survive shipping unscathed. For these reasons, we will not be adding this chassis to our main product line.

Thanks to Hampton Technologies of Bellevue, WA for providing this chassis for review!