Skip to content
Always look at the date when you read an article. Some of the content in this article is most likely out of date, as it was written on January 14, 2019. For newer information, see our more recent articles.

We've recently looked at how the new GeForce RTX cards perform in this renderer, but now the Titan RTX is out with a staggering 24GB of video memory onboard. That sounds great for rendering large and complex 3D scenes, but how does it actually perform? And are there any caveats?

At publishing time, the latest version of Redshift is 2.6.31 – but we are still using 2.6.22 for internal testing. The differences between these minor revisions are mostly bug fixes, rather than things which would impact performance, and with how often Redshift is updated we try to only change when more major version releases happen. I fully expect the results we got to be applicable across 2.6.X releases.

For our test platform this time around, we wanted to use what we recommend to folks looking for a multi-GPU rendering workstation. That means a board and processor capable of running four video cards, with high clock speed being a bigger factor that core count – and also minimizing the cost of the CPU, so that funds can be focused on getting the most powerful GPUs instead. That combination leads naturally to a Xeon W based system, with the quad-core Xeon W-2125, ECC memory, and a fast SSD to avoid potential bottlenecks.

Here are the Redshift 2.6.22 benchmark render times each of the video cards we tested, sorted from fastest to slowest, with the new Titan RTX highlighted in darker green: 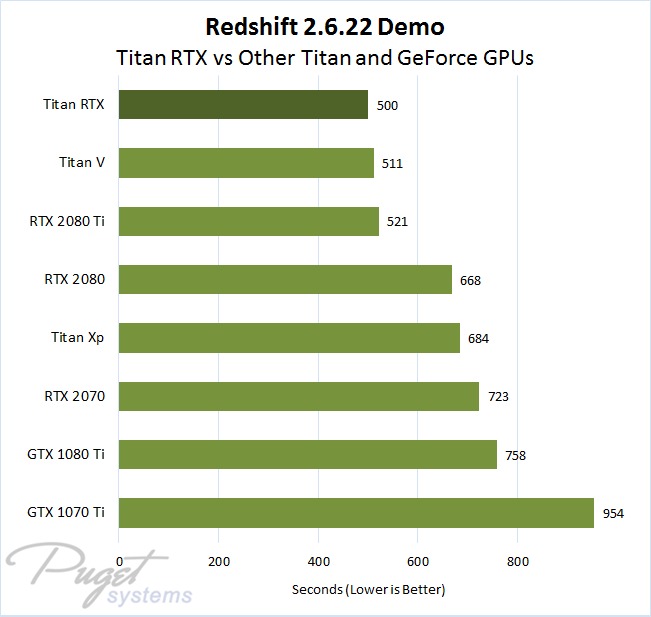 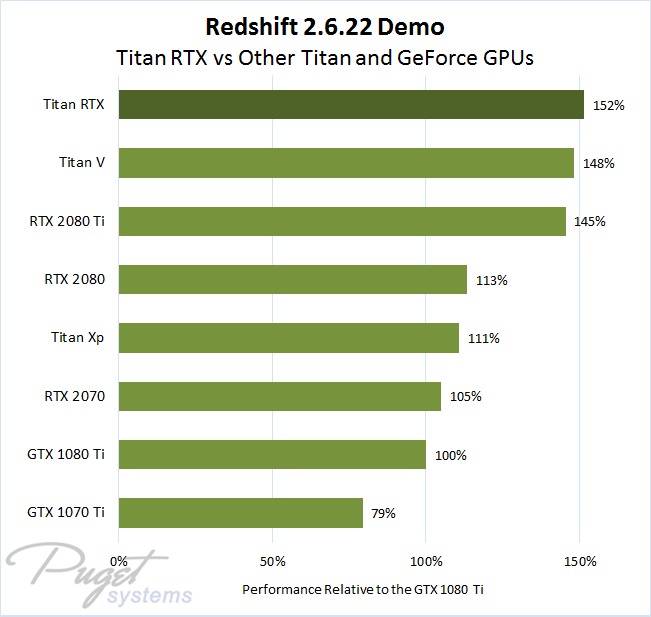 The new Titan RTX took the top performance spot in this round-up, passing even the more expensive Titan V. As a single card it looks to be a fantastic choice for GPU based rendering, but the problem is that it is limited to one or maybe two cards at most in a system.

Why is that? NVIDIA started using dual-fan coolers on their RTX series (both GeForce and this Titan model). Using dual fans means a single card stays cooler and quieter than a more traditional, single-fan design – but it also means greatly increased heat within the computer, which is compounded with each additional card. Most systems can handle the heat from one GPU, and some can handle two with high airflow fans and ample space between the two cards, but beyond that there is just too much heat inside and the fans on the video cards start recycling that hot air which can no longer properly cool the cards – leading to overheating and throttling. Unfortunately, it looks like the Titan RTX is only built by NVIDIA directly… meaning there are no 3rd party models with different cooling layouts.

What Are the Best GPUs for Rendering in Redshift?

Because of the Titan RTX's fan layout, the Titan V is still the fastest card that can be effectively used in multi-GPU configurations.

The RTX 2080 Ti is not far behind, though, and costs far less – so those are probably the best option right now, as long as you use single-fan models. If you need more video memory, to rival the 24GB that comes on the Titan RTX, NVIDIA's Quadro RTX 6000 should have similar performance and is equipped with the right type of cooler… but is also substantially more expensive.