Skip to content
Always look at the date when you read an article. Some of the content in this article is most likely out of date, as it was written on January 9, 2019. For newer information, see our more recent articles.

Due to how well DaVinci Resolve leverages the power of GPU(s), new video card launches are something we try to evaluate as soon as possible. The NVIDIA® Titan® RTX, however, is a bit of an odd product for DaVinci Resolve in particular. From the specs alone, it shouldn't be much faster than the RTX 2080 Ti, but it has 24GB of VRAM which can be extremely important for some power users.

Unfortunately, the Titan RTX has a couple of issues that limits its usefulness. First, the price alone is going to be a turn off to many users as it retails for $2,500. At that price you could get multiple RTX 2080 Ti GPUs which will easily be faster for Resolve. In addition, the dual fan cooler means that you can only use a single Titan RTX in most systems or two cards if you have a high amount of system airflow. In an application like DaVinci Resolve where multi-GPU configurations are fairly standard, that is a very big limitation. 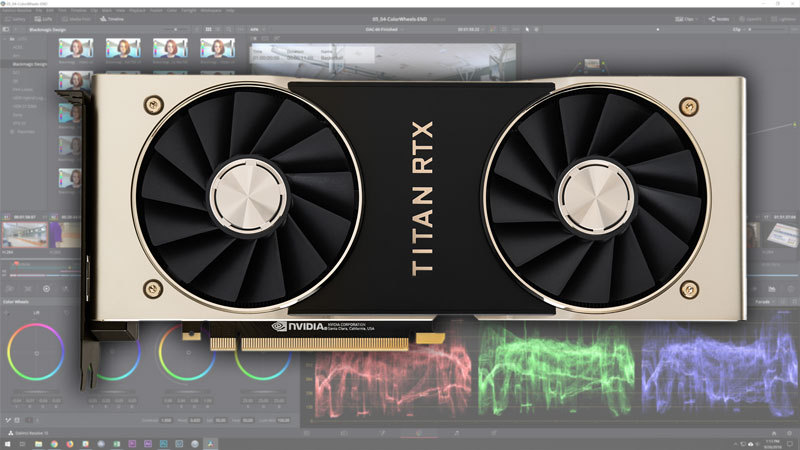 To see how the new Titan RTX card performs in DaVinci Resolve, we tested it against a selection of high-end cards from NVIDIA going all the way back to the Titan Black.

Our testing was done on DaVinci Resolve Studio 15.2.1.5 and primarily revolves around the Color tab and focuses on the minimum FPS you would see with various media and levels of grading. The lowest level of grading we test is simply a basic correction using the color wheels plus 4 Power Window nodes with motion tracking. The next level up is the same adjustments but with the addition of 3 OpenFX nodes: Lens Flare, Tilt-Shift Blur, and Sharpen. The final level has all of the previous nodes plus one TNR node. 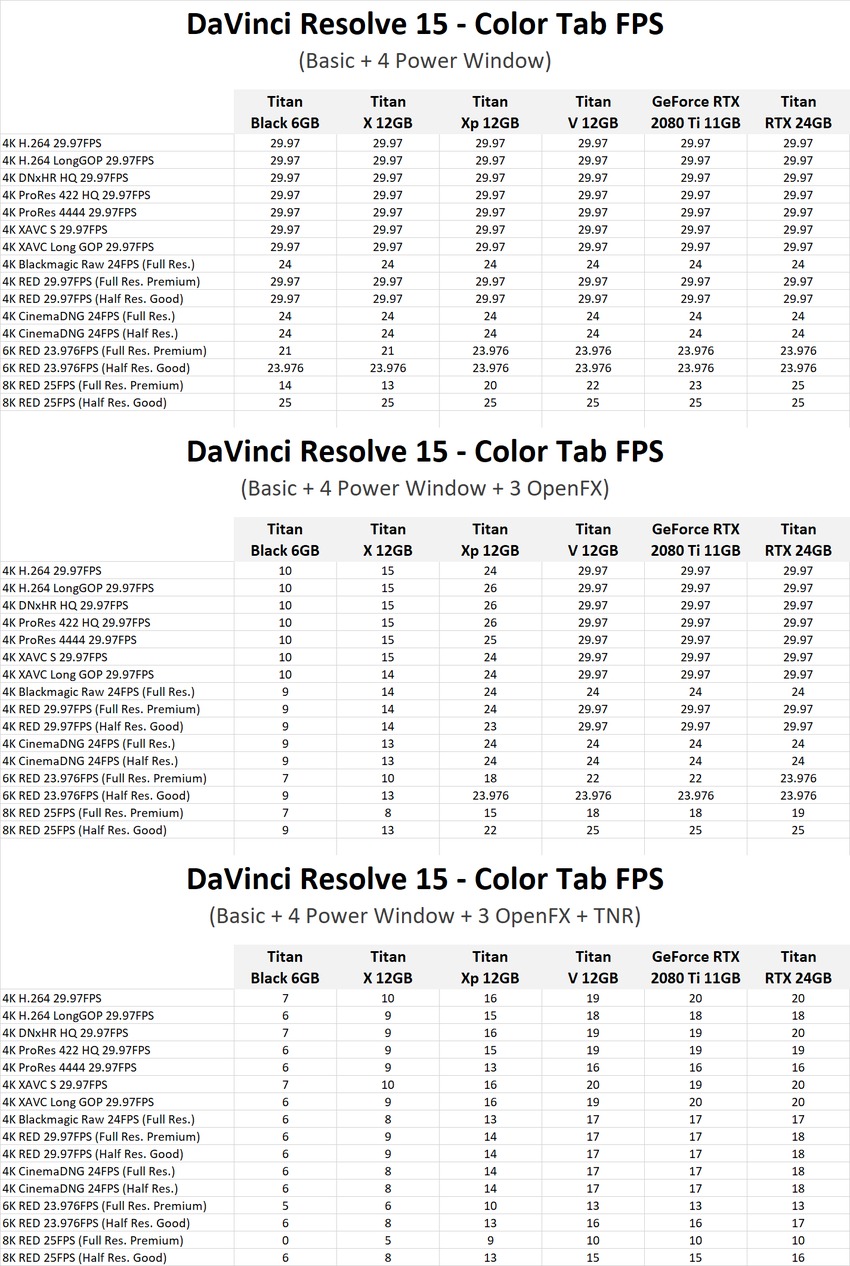 To analyze our color grading results, we are going to break it down based on the three different levels of color grading we tested. The easiest level of grading – a basic grade with 4 power windows – is not too difficult and any decent GPU should be able to give full playback FPS with everything but RED 6K/8K media. However, each level up should show more and more of a difference between the different cards.

The "Score" shown in the chart below is a representation of the average performance we saw for that test. In essence, a score of "80" means that on average, the system was able to play our project at 80% of the tested media's FPS. A perfect score would be "100" which would mean that the system gave full FPS even with the most difficult codecs and grades. 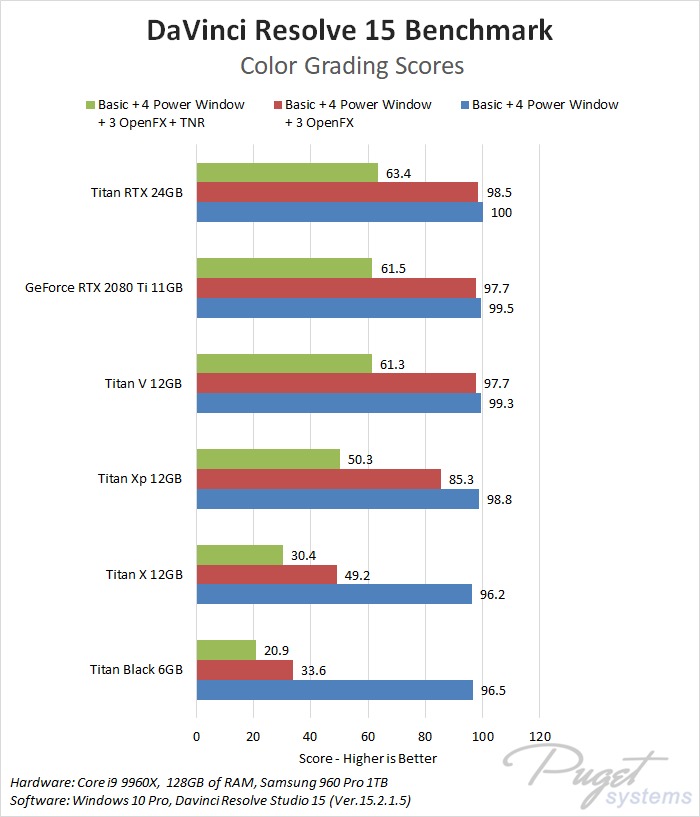 Including the older Titan models gives us a very nice look at how much GPU performance has improved over the last six years. Light grading with just some color adjustments and 4 power windows isn't all that stressful, so even a six-year-old card handles it very well. With a couple of OpenFX effects you can see a benefit with a newer card, although with the RTX line we are hitting the limit of how much GPU power you need for that level of grade.

Temporal Noise Reduction is really where you are going to see the biggest benefit from a faster GPU. However, even here the RTX 2080 Ti, Titan V, and the new Titan RTX all performed about the same. The Titan RTX is a few percent faster, but given the cost of the card you could easily get way more performance out of a pair of RTX 2080 Ti cards and have a nice chunk of change left over. 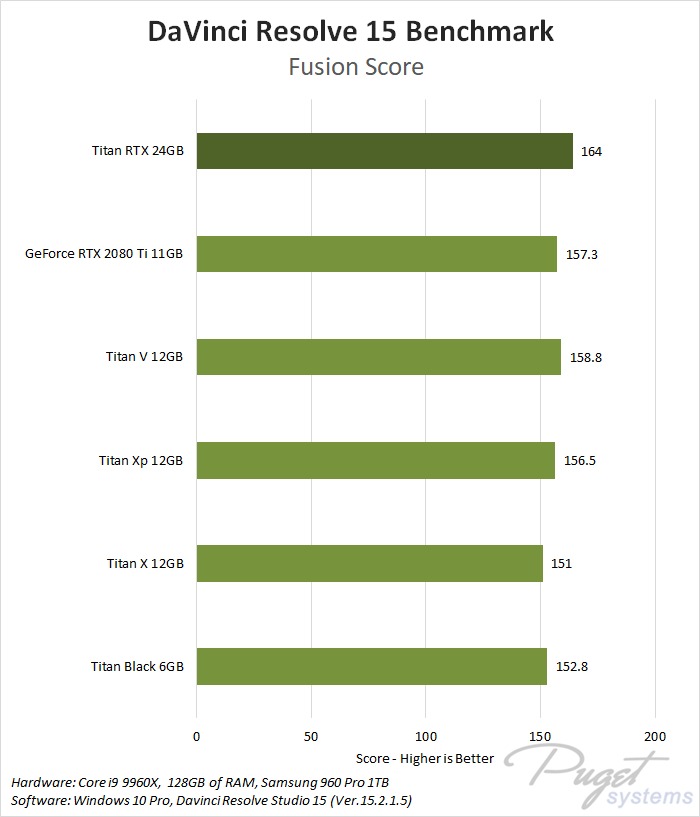 Moving on to the results for Fusion, there isn't all that much to talk about. Just like Adobe's After Effects, Fusion is almost always going to be limited by the single-core performance of your CPU. This means that outside a very few isolated instances, your GPU is not going to make much of a performance impact in the current version of Resolve.

The NVIDIA Titan RTX is a very interesting GPU for DaVinci Resolve, but not because of its raw performance. In fact, if performance is what matters to you, the RTX 2080 Ti is only slightly slower and you can easily get multiple 2080 Ti's for the same cost of a single Titan RTX. Instead, the draw of this card is the 24GB of VRAM which can be necessary for users who do things like heavy noise reduction on 8K footage. 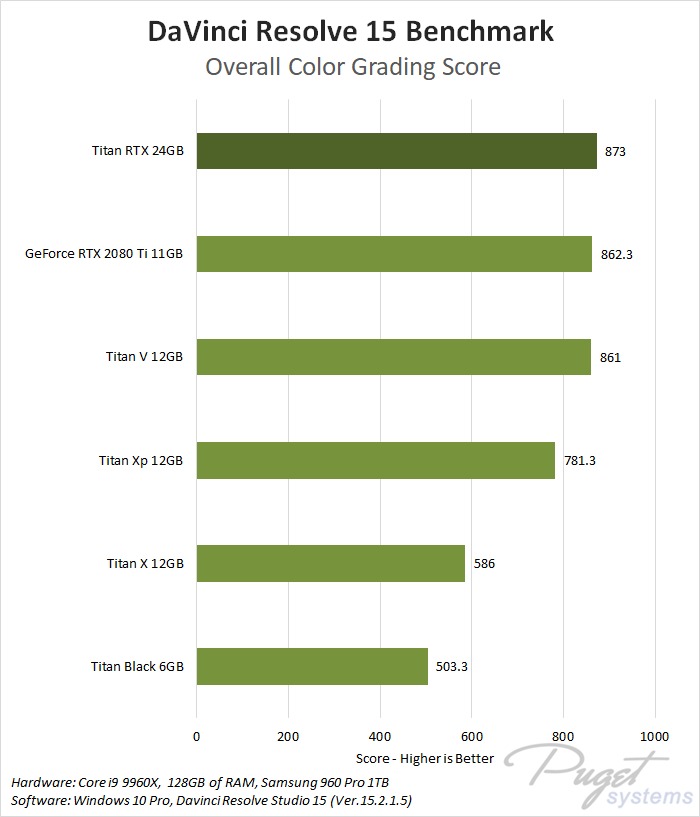 Overall, the Titan RTX is a very… confusing product for applications like DaVinci Resolve. On the one hand, the 24GB of VRAM is incredibly important for those that need it, but the dual fan cooler design means that you should stick with a single card in most systems – maybe two cards if you have a high amount of system airflow.

Since the users who need the extra VRAM are also likely to need a lot of GPU power, only being able to use one or two Titan RTX cards (without getting into extreme measures like liquid cooling) is a significant limitation. The obvious solution is to use NVIDIA's Quadro line which are designed to be used in multi-GPU configurations, but the cost of a Quadro RTX 6000 is double that of the Titan RTX – which is already more than double the cost of an RTX 2080 Ti.

That really puts the Titan RTX in an odd position. Unless a manufacturer comes out with a rear-exhaust model (which is unlikely since NVIDIA has been the sole manufacturer of the Titan cards in recent years), the Titan RTX is really an niche product for DaVinci Resolve. There will be a handful of people where it fits the exact need they have, but for the vast majority of users either the RTX 2080 Ti or an NVIDIA Quadro GPU is going to be the better option depending on their needs and budget.