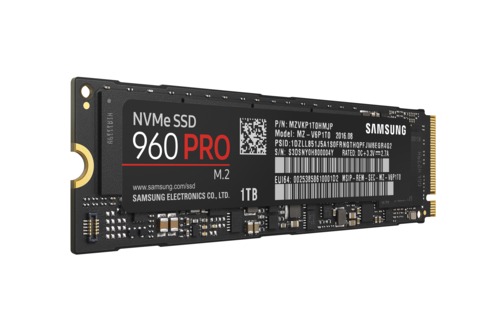 Samsung's 960 Pro line of solid-state drives is their second generation of retail M.2 form factor SSDs. These drives run at a full PCI-Express 3.0 x4 speed, which provides lots bandwidth and results in performance that is several times what a SATA III based SSD can provide. This 1TB model has sequential read speeds of up to 3.5GB/s with write speeds up to 2.1GB/s.

William George (Product Development) Says:
These SSDs are absurdly fast, and between the speed and the improved (but not perfect) thermal situation I no longer have reservations about recommending them. However, I should note that the speed doesn't help in all situations. Once you reach the speed of normal, SATA-based SSDs the improvement from an even faster drive only comes into play if your workload is actually doing a lot of reading or writing *and* isn't bottle necking somewhere else.

Josh Raye (Product Manager) Says:
A worthy improvement over the previous generation. This M.2 drive does still throttle under extended stress, but it takes twice as long to hit that point, and the speed that it throttles to exceeds the last generation's non-throttled speed.
Model: Samsung MZ-V6P1T0BW