64 cores is a lot of cores! How well will parallel applications scale on that many cores? The answer, of course, is, it depends on the application.

In this post I'm presenting simple Amdhal's Law scaling results for applications that I have been benchmarking with recently. This is simple speed-up vs number-of-cores. Speed-up is relative to performance on 1-core with the number of cores increasing from 1 to 64. SMT threads are disabled in the BIOS so all processes run on "real" cores.

Linpack and the numpy tests showed rather poor scaling but NAMD scaling was good considering the large number of cores on this single socket system.

These were difficult challenges for the 3990x since none of these applications are "embarrassingly parallel". That is, they all require core-memory access exchange and inter-process communication. With 64 cores I would only expect good scaling when processes and data are independent with minimal communication and fast accumulation. 64-cores accessing memory at the same time is likely to expose limitations on the memory subsystem more than individual core performance.

Note: I was able to install using Ubuntu 20.04 by including a kernel boot parameter `mce=off` during install and then added that to `/etc/default/grub` as `GRUB_CMDLINE_LINUX_DEFAULT="mce=off"`. That disables "Machine Check" error reporting. I expect this to be resolved by the time Ubuntu 20.04 is in finial release.

See Wikipedia for an explanation of Amdhal's Law.

Here is the python code used to generate the plots (using the HPL data as an example).

This is HPL provided by AMD with the BLIS library. The problem size was chosen as %80 of the 128GB system memory as a multiple of the block size (768). The following python snippet gives 104448. That was used in the HPL.dat input file.

The plot is from run-time, in seconds, converted to speed-up vs number of cores. 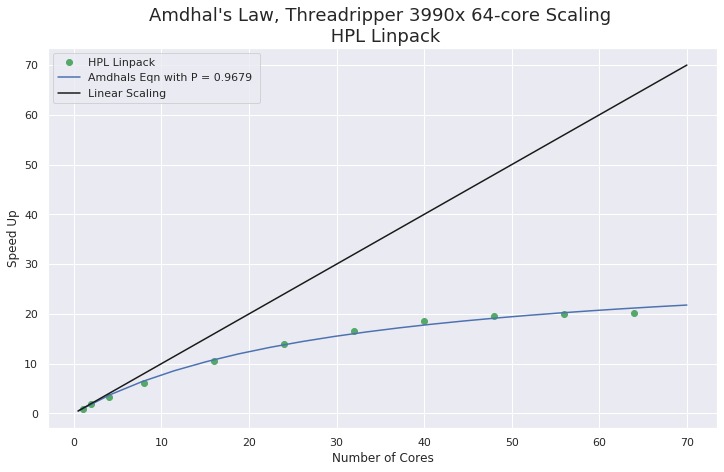 You can see from the plot that there is no speed-up after 48 cores. Ideal linear scaling is represented by the black line.

The conda env for this was created using OpenBLAS,

The python code is, 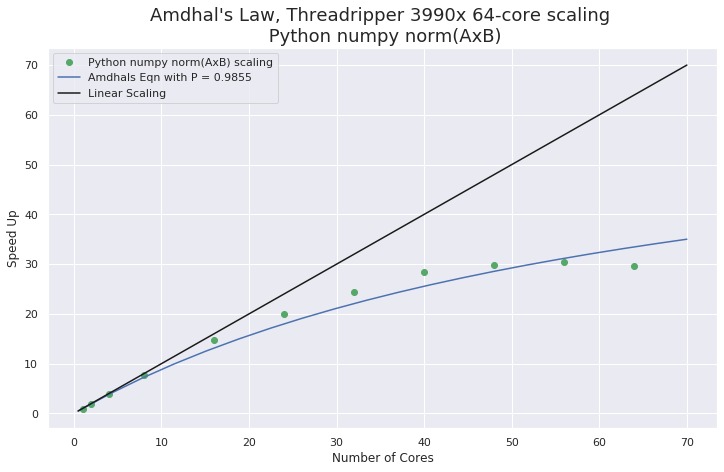 In this plot you see performance flatten out by 48 cores. The fall-off is enough to spoil the Amdhal curve fit and even declines slightly at 64 cores. The results up to 40 cores however are very good.

The molecular dynamics program NAMD in general scales well across cores, nodes and GPU's. I consider the results here for the ApoA1 job run to be good. I do believe the slowdown at higher core counts is memory bottleneck during accumulation of forces. It's not unexpected.

Run commands were similar to, 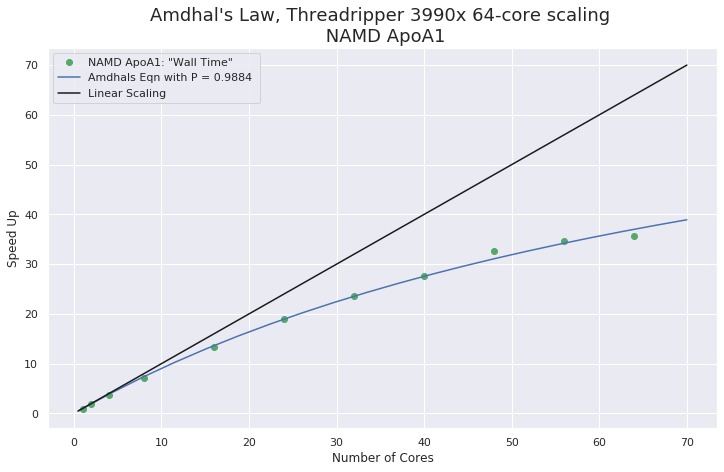 The scaling for the STMV job run is even better than the smaller ApoA1 problem. 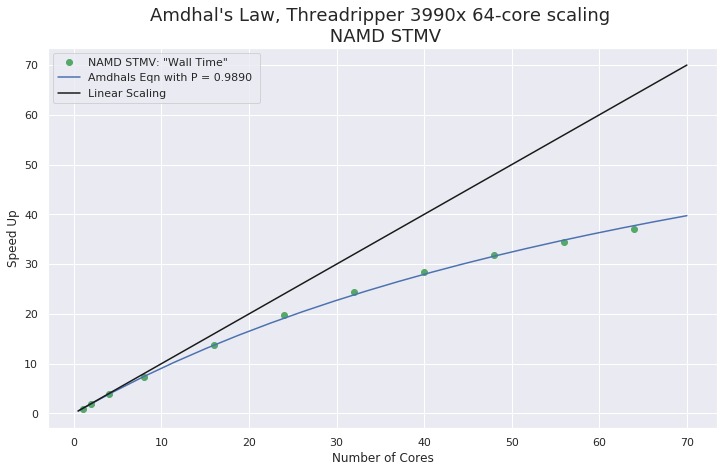 Hopefully these results give you some reality on running processes on 64 cores at once! THere will be problems that will not perform well with that many thread or MPI ranks on a single socket node. Other programs will do better. NAMD is a good example. Even thought it would be nice to see better scaling with NAMD it is still quite good and if you combine these 64 cores with a couple of NVIDIA RTX 2080Ti or RTX Titan GPU's it would make a very nice molecular dynamics workstation.

I will likely get more opportunity to test on the 3990x. It would be nice to run some testing with applications that are more linear by nature. It would also be interesting to run the same tests in this post on the AMD EPYC rome 64-core server processor. I expect that EPYC may do better because of better memory handling. I'll try to do that if possible.