Over the ten years I have worked here at Puget Systems a lot has changed. We are a much bigger company than we were then, and our build process and quality control are far better than when I was production manager. Another thing that has changed is the components and brands that we carry. This may be most noticeable in what has happened with AMD processors over those years.

Back in 2005, when I joined the team here at Puget, it was the heyday of AMD. For a couple of years they had been in a position of technological dominance. Intel was still the bigger company and sold more processors, but you could get an AMD chip that was both faster and less expensive than what Intel offered. In the mobile space Intel was still king, but on desktops and even servers there were lots of good reasons to use AMD… and few, if any, not to. I've put together a graph showing our CPU sales breakdown between AMD and Intel from 2003 to 2015, showing the % of our CPU sales that went to each of those manufacturers: 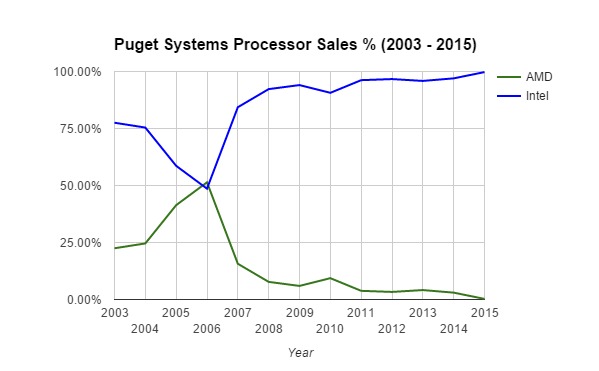 As you can see, AMD was steadily on the rise in our product line – and in 2006 managed to surpass Intel in sales volume. That was followed by a stark drop in 2007, though, and then a continual decline over the following years.

So what happened in 2006 / 2007 that changed AMD's fortunes? Intel released the Core 2 processor platform. After years of trailing AMD in raw performance, Intel finally put out a new line of processors – breaking from their long-used Pentium branding – which beat AMD in application speeds. For a couple years AMD held onto a price / performance lead, making them a decent choice for those on a more limited budget, and in some comparisons that still can hold true today… but with our focus on high performance systems AMD kept losing interest among our customers as the years went by.

Additionally, CPU cost is just one aspect of a full computer purchase. AMD processors, and motherboards for them as well, are generally less expensive… but if all the other parts in the system are the same price, is it really worth saving a couple hundred dollars if you lose out on a substantial amount of performance in the process? To me, if the percentage loss in performance exceeds the percentage reduction in price, then it isn't worth it.

For that reason, my last few computers have been Intel based – though I used to really like AMD, and was proud of selecting them over Intel for several computers I built from about 2001 to 2010. It is also the reason that we have seen a declining interest in AMD desktop processors here at Puget Systems, which finally resulted in us dropping them from our product line earlier this year. We still offer AMD's Opteron server processors, though they too are showing their age compared to Intel's offerings. It just doesn't make good business sense for us to carry and maintain a product line that so few of our customers purchased.

Now if AMD comes out with a new generation of processors that turn the tide again, as they did in the early 2000s, things could change. I hope for their sake, and for that of competition (which is always good for end-users), that they do. Only time will tell, though.