Two brothers, Rick and Lynn Hensel, founded the company after working many years as news photographers for a local broadcast station. Tired of covering the same bad news every day, the two began looking to make a change where they could use their creative skills to help companies, organizations and people tell unique and compelling stories. They formed Spot MPG with just the two of them and one editor on staff. They’ve since grown to 12 full time employees and have come to make a name for themselves in the video production industry in St. Louis and the Mid-West.

Spot MPG is a creatively inspired digital content business that specializes in creating dynamic video content that helps their clients find new ways to reach their target audience. As the world continues to get smaller, organizations, no matter their size or reach, are becoming truly global. Good production skills get noticed, evoke a response and stand apart in a highly saturated world of images and messages.

Spot MPG has an award-winning team with extensive experience in production, photography, editing, project management and engineering. They work hard to be efficient. Their videos are always organized and the team members strive to be innovative, creative thinkers and problem-solvers at all times.

“We love our work – after all we get to make videos for a living! And because of our team of awesome, fun loving, creative goof-balls… we’re pretty good at it.”

The software they use includes the Adobe Creative Cloud, Cinema 4D, VLC Media Player, Post Haste, Neofinder, Abemeda, and Dropbox. For their audio work, they use Adobe Audition and Avid ProTools. They use Studio Network Solutions EVO – 64TB with 10GBe/1GBe connections for network storage.

Spot MPG does continue to utilize some Mac systems. In particular, they use MacBook Pro laptops as portable editing machines as well as a Mac Mini for copying storage to backup raid drives for redundancy and some older Mac Pros for storage archival and retrieval.

Prior to purchasing their Puget Systems computers, Spot MPG was at a crossroads. They were using their 2008-2010 Mac Pros that were connected to a CalDigit SuperShare storage server that had passed its support life. Their storage system would not recognize Mac OS beyond 10.9 so they could not update the OS on their Mac Pros. On top of that, the current version of Premiere would not support their current Mac OS 10.9 build. Finally, having to spend money on new Macs that had 3-4 year old technology (which couldn’t even handle the 4K footage from the Canon C300 Mark II created a perfect storm to consider going down the road of moving to PC.

Having spent the majority of their professional life working with Macs, both at work and at home, they were still very apprehensive about moving to PCs. They worried about an OS that they were unfamiliar with and how to deal with the various formats between the two systems. However, once they were in the actual program, in particular Premiere, they mentioned how familiar that was and that they could map similar keyboard shortcuts.

“Just make sure you keep straight of Command (Apple) vs. Control (Windows) key. Also, make sure you are using the right delete key!”

Advice on Making the Move to PC

After Spot MPG made the transition themselves, here are some things they recommend to make the move easier:

“Give yourself a couple of weeks. You will be frustrated, especially that first week, but by the second week, it should be much better."

The PC did not handle the transferring of data from the old server to the new storage server well. The issue was the path names were way too long. There’s a regedit that can be applied within Windows 10 that will enable longer path name. The other issues were spaces in the path name. In those instances, they had to manually change those spaces to underscores before the data would copy. 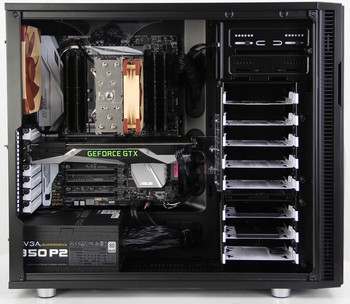 In our extensive testing, we’ve found that Premiere Pro works best with 6-10 cores. So, we opted to put in a high-end 10 core i7 processor. We selected an NVIDIA graphics card that was optimized for Premiere Pro and also gave them enough memory to handle their 4K workflow. The system also had a couple of high performance SSDs for both their OS / programs and their active projects. Spot MPG added their own Decklink Studio card for video output and a 10Gbe card for connecting to their Shared Storage.

On the Audio editing side, we opted to go with one of our Genesis I systems that had a high-end 8 core i7 processor, enough ram for their use case, and (again) two high performance SSDs. We also included our quiet modification kit and quiet case fan upgrade kit to further silence the computer during their audio work. Spot MPG then added a BlackMagic UltraStudio Decklink Mini-Monitor Playback Device to the system.

“We’re now able to easily use this 4K footage. We can do full workflow, like you’re suppose to be able to, with color grading and everything and it just chugs right through it all. It has sped up our whole process."

One of the draws about Macs are their user friendly interface, the hardware reliability, and Apple's customer support. How were they going replicate that experience on the PC side on top of having to deal with the transition between Mac to PC? Spot MPG stumbled on the following Mike Pecci article on his comparison of Mac to PC. They also read up on our Puget Labs articles on Adobe Premiere which made them more confident that Puget Systems understands their needs. Finally, being able to call up one our consultants and receiving excellent advice made them feel secure about the purchase.

“These are screaming machines. They are AWESOME!”

Are your needs similar to those of Spot MPG? If so, we can build a system for you.