Over the last couple months, Intel has released a couple of very interesting (and expensive) CPUs:

The Core i9 9990XE 14 Core is a high frequency, OEM-only, no warranty processor that only select system manufacturers like Puget Systems has access to via a once-per-quarter auction. While availability and pricing may end up being highly inconsistent, the capabilities of this processor should (on paper at least) be second to none in many workloads - including video and photo editing.

With 28 cores, the Xeon W-3175X 28 Core is the second of these special Intel CPUs that Intel has pushed it to the limit, only with a focus on core count rather than clock speed. In addition to the high cost of the CPU itself (coming in at a MSRP of $2,999), you also need a very specific socket 3647 motherboard and compatible cooler. Motherboards like the Asus ROG Dominus Extreme are expected to cost around $1,800 and will require a chassis that is able to handle its large physical size as it is larger than even standard EATX boards.

In this article, we are going to see how the Core i9 9990XE and Xeon W-3175X perform in Adobe Photoshop, Lightroom Classic, After Effects, and Premiere Pro. In addition, we will be comparing them to the best of Intel's normal X-series and 9th Gen lineup as well as the top AMD Ryzen and Threadripper CPUs to see whether they even make sense for those that do have the budget and reach to afford them. If you are more interested in highly threaded workloads, we also have an article available looking at CPU rendering performance in V-Ray and Cinema 4D.

Listed below are the systems we will be using in our Adobe CC 2019 testing:

Big thank you to Asus for the ROG Dominus Extreme motherboard and Asetek for the 690LX-PN CPU cooler! Without Asus and Asetek providing samples, we would not have been able to test the Intel Xeon W-3175X.

Listing out the details of our Adobe CC benchmarks would double the length of this article, so we are instead going to simply link out to either our benchmark download page (for Photoshop and After Effects) or a recent article that includes our benchmark process (for Lightroom Classic and Premiere Pro):

To start off our testing, we decided to look at Adobe Photoshop CC. Photoshop tends to only be able to use a handful of CPU cores, which means that while the Intel Core i9 9990XE should do fairly well due to its high clock speed, the Xeon W-3175X is unlikely to be one of the top performers.

There results of our Photoshop benchmark is not too much of a surprise. The Core i9 9990XE does very well - essentially matching the Intel Core i9 9900K - due to its high 5.1 GHz maximum Turbo Boost frequency. That obviously doesn't make it very cost effective from a pure performance standpoint given that it is at least four times the cost of the i9 9900K, but the ability to utilize up to 128GB of system RAM could make it an interesting option for some users.

The Xeon W-3175X, however, is definitely not a CPU you should use if you are looking to get the best performance out of Photoshop. While it certainly works and is better than the AMD Threadripper 2990WX, it is still measurably slower than processors that are significantly less expensive. To be honest, this is not really the fault of this CPU. The Xeon W-3175X is intended for workloads that are able to effectively utilize a high number of CPU cores, which is simply not what Photoshop is.

Keeping things in the image/photography field, Lightroom Classic CC is definitely much better at leveraging higher CPU core counts than Photoshop, although it really only does so for certain actions like exporting images or generating previews. Because of this, whether a high frequency or high core count CPU is best depends on what you are doing in Lightroom.

Unlike in Photoshop, the Intel Xeon W-3175X does reasonably well in Lightroom Classic. In terms of the overall benchmark score it still falls behind the Core i9 9980XE and 9990XE, but it was easily the fastest CPU we have tested for bulk tasks like exporting and generating previews. Whether a 10% increase in performance for those tasks is worth the much higher cost and heat generation is something to be decided by each reader, but for most users the W-3175X is likely not the best choice as its performance everywhere else in Lightroom Classic is mediocre.

Even the Core i9 9990XE is a bit of a mixed bag. It also does very well for bulk tasks, but it falls behind the much less expensive Core i9 9990K when culling images or working in the Develop module. Since that is where we tend to hear the most demand for greater performance from our customers, the i9 9900K 8 core CPU is still our go-to recommendation for Lightroom Classic.

Moving on video and motion graphics, Adobe After Effects is a bit similar to Photoshop in the fact that the vast majority of the software is only able to utilize a handful of CPU cores. There are some aspects (the C4D Renderer in particular) that can benefit from a higher core count CPU, but even there it is more about a balance between frequency and core count.

Starting with the Intel Core i9 9990XE, this processor is really an ideal CPU for After Effects. The high clock speed makes it terrific for the single threaded aspects of Ae (which is most of it), while the high core count also makes it great when utilizing the C4D renderer. It only ends up being about 3% faster than the i9 9990K in our After Effects benchmark, but that technically makes it the fastest CPU we have tested for After Effects.

As for the W-3175X, we didn't expect it to do particularly well in Ae but we were a bit surprised at how poorly it performed. The standard and tracking results are to be expected given the nature of this CPU, but we expected it to do better in the Cinema 4D renderer tests. The W-3175X does well in the stand-alone version of Cinema 4D (as we discuss in our i9 9990XE vs W-3175X rendering article), but it appears that the lightly-threaded overhead from Ae means that it is very important to have a balance between core count and clock speed.

The last software we will be looking at is Premiere Pro CC 2019. Out of the Creative Cloud applications we tested, this is likely to be the best case scenario for a CPU like the Xeon W-3175X since you can often get better performance out of higher core count CPUs - especially when exporting.

Interestingly enough, both the Core i9 9990XE and the Xeon W-3175X did well in our Premiere Pro benchmark. Typically, the i9 9990XE does best when clock speed (or a balance between clock speed and cores) is important, while the W-3175X is best for highly threaded workloads. Premiere Pro is apparently right on the line between those two scenarios which allows these two CPUs to do very well. If you are looking for the best possible performance in Premier Pro (regardless of price or the ability to actually get your hands on it), these processors are certainly what you would want.

Unfortunately, the performance gain isn't a particularly large one - you are only looking at about a 2.5% increase over the Core i9 9980XE. Considering the much lower cost and power draw (which means less heat and noise), along with the fact that you can readily procure a Core i9 9980XE, most users are going to be pretty hard pressed to justify using one of these special processors. Unless you have an unlimited budget, you would likely get better overall system performance with a Core i9 9980XE and spending the cost savings on something like more RAM or faster storage.

Before we get into our final conclusions, we want to again point out that both the Core i9 9990XE and Xeon W-3175X are not processors you are likely to be able to get your hands on. The i9 9990XE is only available to a handful of system integrators via a once per quarter auction which means that supply, availability, and even price is going to be highly inconsistent. The Xeon W-3175X should be more readily available, but again only system integrators are intended to be able to purchase not only the processor, but the special motherboard it needs as well. Due to the limited availability, high cost, and specialized system requirements, Puget Systems is not planning on offering either of these CPUs in our workstations at the current time. 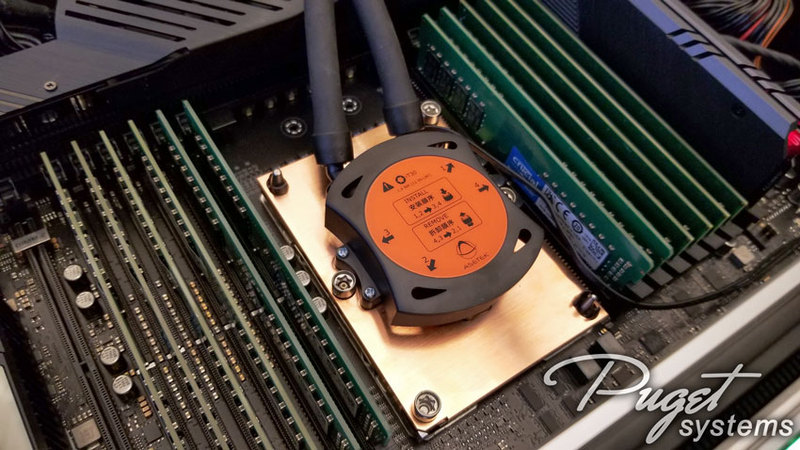 With that said, here is the summary of our Adobe Creative Cloud testing with these two processors:

In most cases, neither of these CPUs are going to be the best choice for Photoshop. The i9 9990XE performs well, but is still a hair behind the much less expensive Core i9 9900K 8 Core CPU. The Xeon W-3175X does not fare nearly as well, coming in at about 30% slower than the Core i9 9900K.

While neither of these CPUs is better than the lower cost i9 9900K 8 Core CPU when culling images or working in the Develop module, they are both excellent at bulk tasks like importing, exporting, and generating previews. Be aware that the performance gain even in these tasks is relatively minor with the i9 9990XE being about 1% faster than the i9 9980XE while the W-3175X is about 10% faster.

Premiere Pro is the one instance where both of these CPUs do well. In fact, they performed almost identically to each other and beat the next fastest CPU (the Core i9 9980XE) by a small 2.5%. This isn't a very large increase in performance - certainly nowhere near the relative price increase - but if you are looking for the best of the best regardless of any other consideration, these CPUs tie for that crown.

If you have read any of our other articles looking at Photoshop, Lightroom Classic, After Effects, or Premiere Pro, you likely are not too surprised that the Xeon W-3175X did relatively poorly in our Creative Cloud testing. To be frank, given the nature of this software and the workloads this CPU is designed for, we were actually a little surprised at how well it ended up doing in Lightroom Classic and especially Premiere Pro. So if anything, the Xeon W-3175X exceeded our expectations.

The Core i9 9990XE, on the other hand, is pretty much the ideal type of CPU for the software we tested. In most cases, raw performance per core is what matters most in Adobe applications, but there are also many situations where having a higher number of CPU cores helps. Since the i9 9990XE has both a high clock speed and a reasonably high number of cores, it ends up at the top our charts in pretty much every Adobe package we tested.

To be fair to the Xeon W-3175X, we do want to make it clear that in the situations it is designed for, it is a pretty decent processor. For example, it should do well in scientific workloads like NAMD and in CPU rendering applications like V-Ray and Cinema 4D it beats every other CPU we have tested to date. If nothing else, this article simply goes to show how important it is to get a CPU that is right for the software you use rather than just getting the most expensive CPU possible.