Intel recently released a pair of rather odd, high-end processors:

Because of those oddities, and more, neither of these processors will have a home in our product line at this time. They are still worth testing, though, both for fun and for insight into what current CPU designs are capable of when pushed beyond what is practical.

This article will focus on how these processors handle the heavily-threaded workload of photorealistic rendering, specifically with V-Ray and Cinema 4D, but we also have an article diving into how these chips do in the Adobe Creative Suite. Since we are concerned with rendering speed here, we are including other high-end Intel processors as well as a few of AMD's Threadripper CPUs as references.

Big thank you to Asus for the ROG Dominus Extreme motherboard and Asetek for the 690LX-PN CPU cooler!
Without these, we would not have been able to test the Intel Xeon W-3175X.

Both Chaos Group and Maxon provide benchmarks which measure rendering performance in their applications, and although they are both a little dated we find that they are still very helpful in comparing CPU performance. Since we are focusing on the CPU in this case and not the video card, we are going to disregard the scores for GPUs (in V-Ray) and OpenGL (in Cinebench). There can be some variance in these tests from one run to another, so we ran each benchmark a few times and selected the fastest result - the lowest times for V-Ray and highest scores for Cinebench - to be included in the charts below. Some of the results are from previous articles as well.

Here are the results for V-Ray Benchmark 1.0.8, the latest version as of publishing time. The new Intel CPUs are shown in dark blue, other Intel processors are in lighter blue, and AMD's Threadripper models are in red. Results are in seconds, so lower is better: 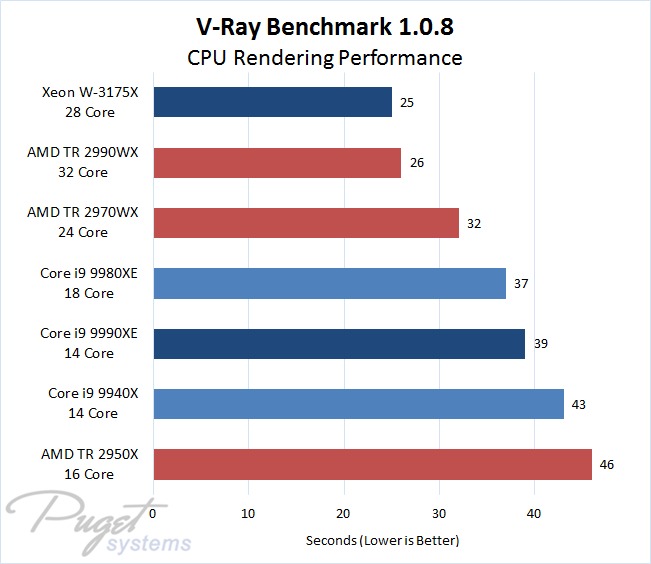 Here are results for CineBench R15.038, the latest version as of this publishing, with separate charts for Multi-Core and Single Core performance. Color coding is the same as above. The only one that really matters for CPU-based rendering is the multi-core result, but we included single-core as well since it shows how these CPUs stack up in lightly threaded workloads like 3D modeling and animation.

Intel's 28-core Xeon W-3175X behemoth does take the top performance spots for both CineBench and V-Ray, but it is not very far ahead of AMD's top-end 2990WX. However, the W-3175X is over $1000 more expensive on its own - plus it requires a special motherboard, cooler, and chassis that would add at least another $1000 compared to what a Threadripper system costs... or very likely even more.

This is also just focusing on single-CPU systems. If you had an unlimited budget, moving up to a dual Xeon 8180 system could give substantially better rendering speeds... for many thousands of dollars more. In terms of performance per dollar, Threadripper wins.

What about the Core i9 9990XE? It fares okay, considering it has far fewer cores, coming in around the same level as the i9 9980XE. That processor has more cores, but a little bit lower clock speed, which is why they end up performing so closely. However, the 9980XE is also much easier to purchase - with none of the weird auction business - plus it costs less, comes with a warranty, and runs cooler. The only place where the 9990XE really shines compared to the rest of the CPUs we tested is in single-threaded applications, thanks to its very aggressive clock speeds. You can get that level of single-thread performance for much less money with a Core i9 9900K.