Unlike most of the other applications we tested, DDR5 isn't likely to change things much for Photoshop as we only saw a marginal increase in performance with DDR5 that was easily within the margin of error for this kind of real world tests. But even with DDR4, if you are looking to get the best performance in Photoshop, the 12th Gen Intel Core CPUs are the way to go.

Last week, Intel announced their 12th Gen Intel Core desktop processors (code-named "Alder Lake") with the most notable feature being the new hybrid architecture which utilizes a mix of Performance and Efficient-cores. The Performance-cores (P-cores) are what you typically would think of when it comes to a CPU core, and are designed to maximize performance for heavier workloads. The Efficient-cores (E-cores), on the other hand, are intended either for tasks that can be run in parallel, or for background tasks where higher performance isn't necessary. 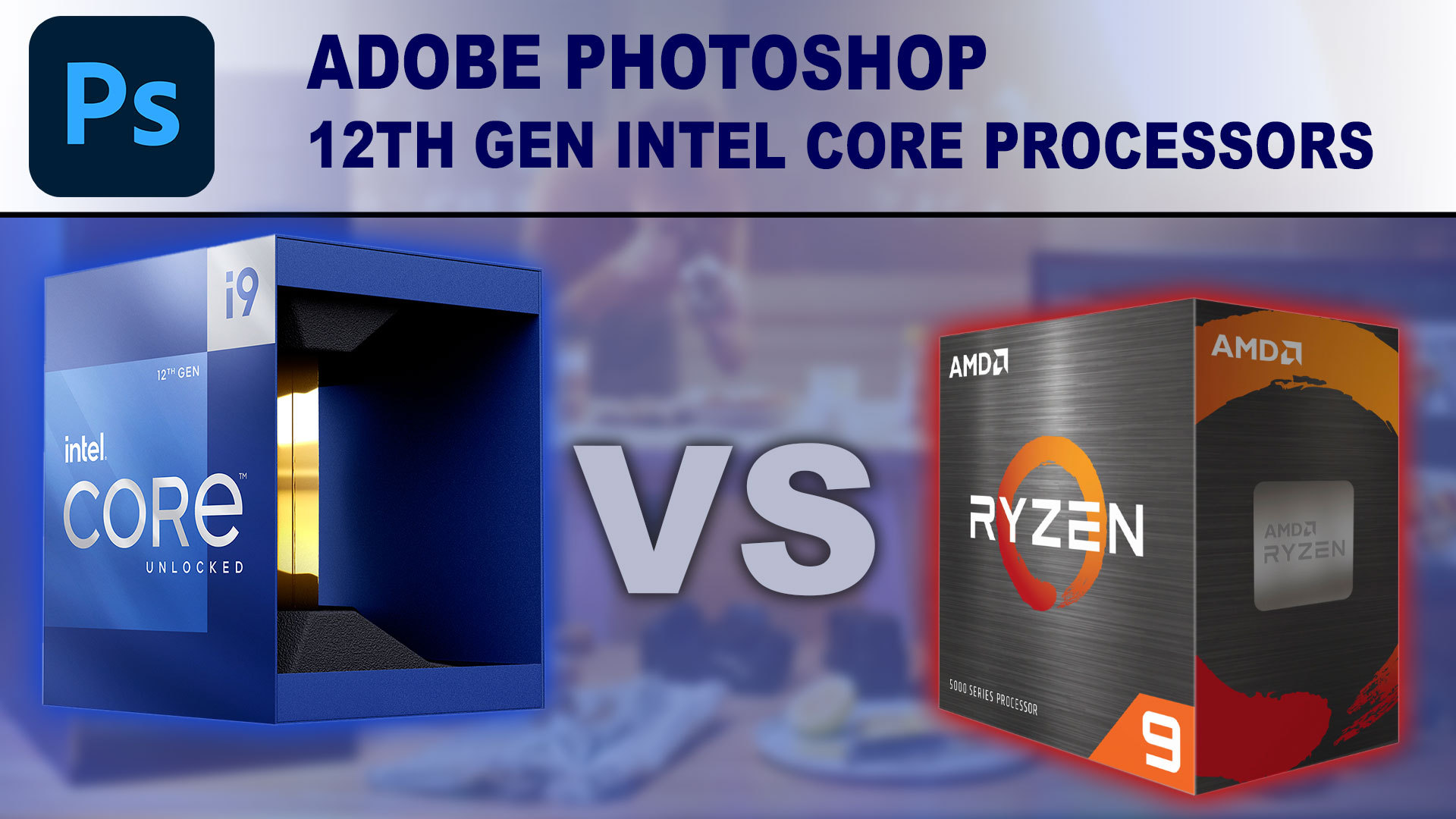 In this article, we will be examining the performance of the new Intel Core i9 12900K, i7 12700K, and i5 12600K in Photoshop compared to a range of CPUs including the Intel 11th Gen and AMD Ryzen 5000 Series processors. If you are interested in how these processors compare in other applications, we also have other articles for Premiere Pro, After Effects, Lightroom Classic, DaVinci Resolve, and several other applications available on our article listing page. Or, you can check out the summary of all our results in our overarching 12th Gen Intel Core CPU Review Roundup article.

In order to see how the new 12th Gen Intel Core processors perform in Photoshop, we will be comparing them not only to the previous 11th Gen Intel Core CPUs but also to AMD's Ryzen 5000 series. For the test itself, we will be using our PugetBench for Photoshop benchmark and the new 23.0 version of Photoshop. This benchmark version includes the ability to upload the results to our online database, so if you want to know how your own system compares, you can download and run the benchmark yourself.

Windows 11 had a rocky start with AMD CPUs and processors with more than 32 cores, but with the latest updates, we found the difference between Windows 10 and Windows 11 with these Ryzen CPUs to be negligible for Photoshop. We will have those results, and similar testing examining Intel 12th Gen performance on Windows 10, in an upcoming "12th Gen Intel Core – Windows 11 vs Windows 10" article. 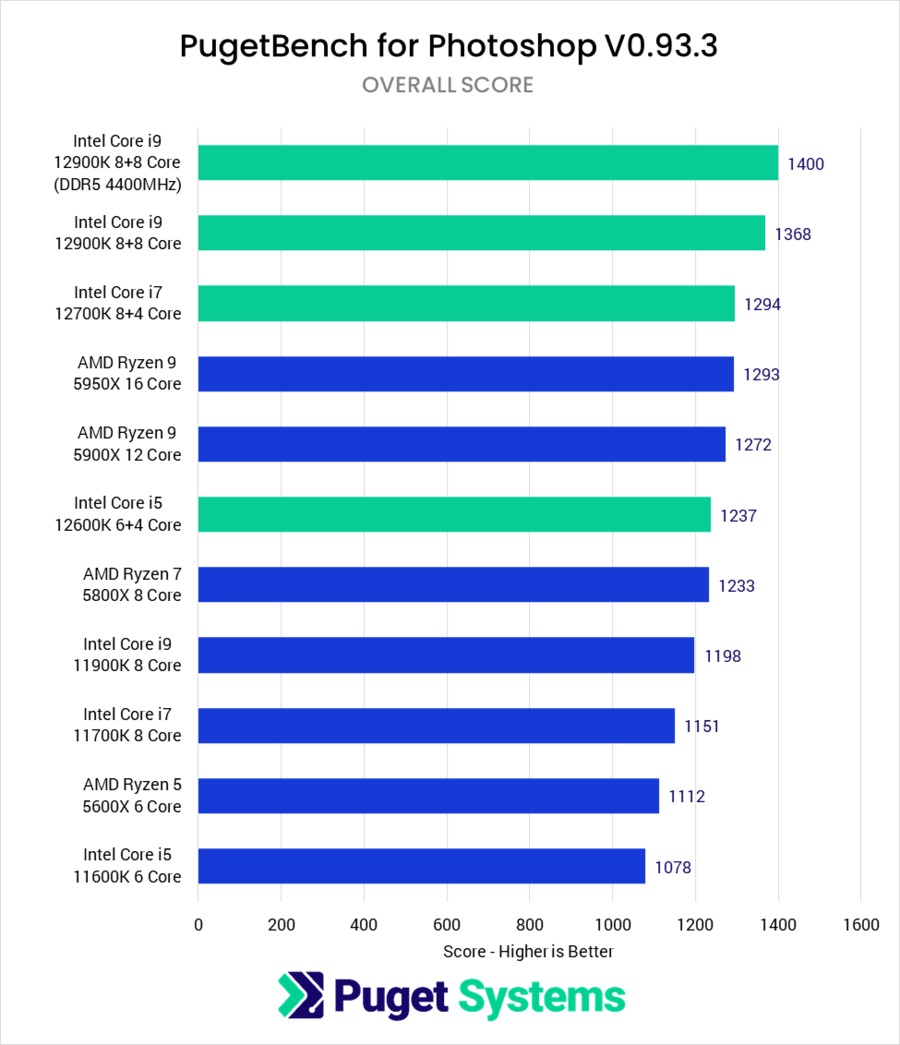 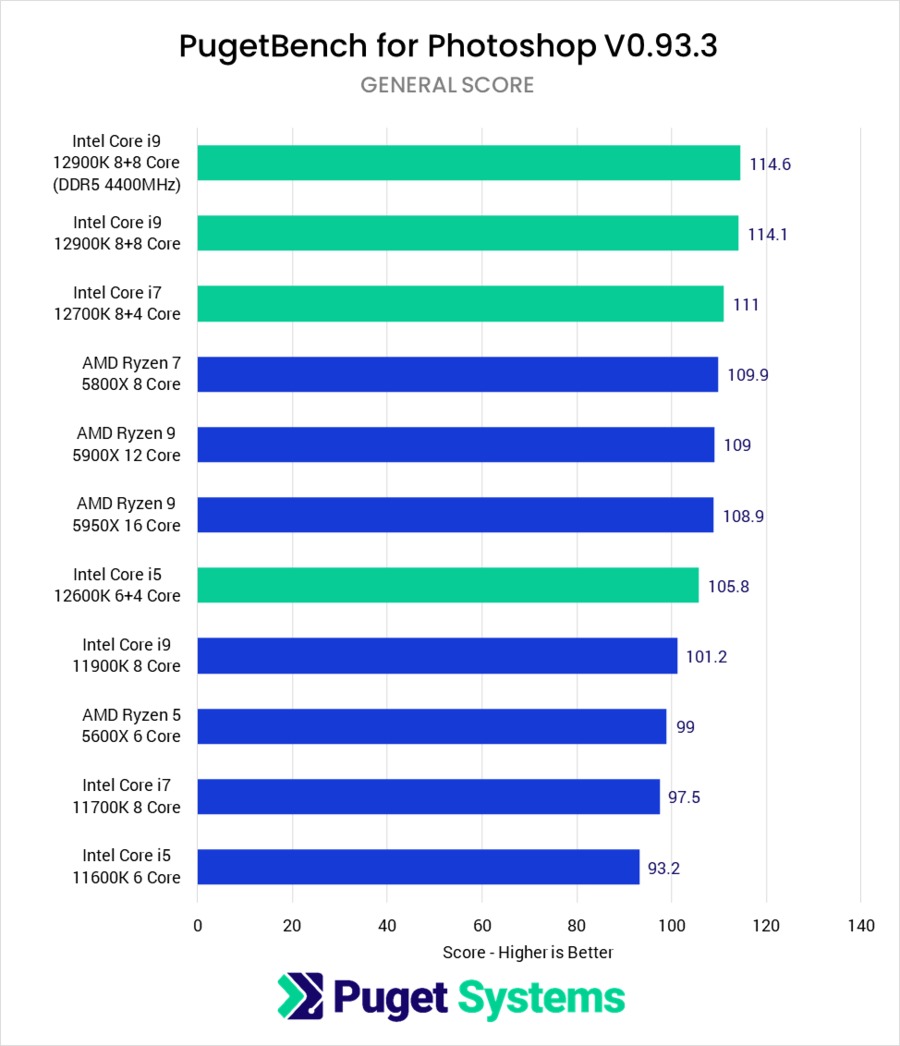 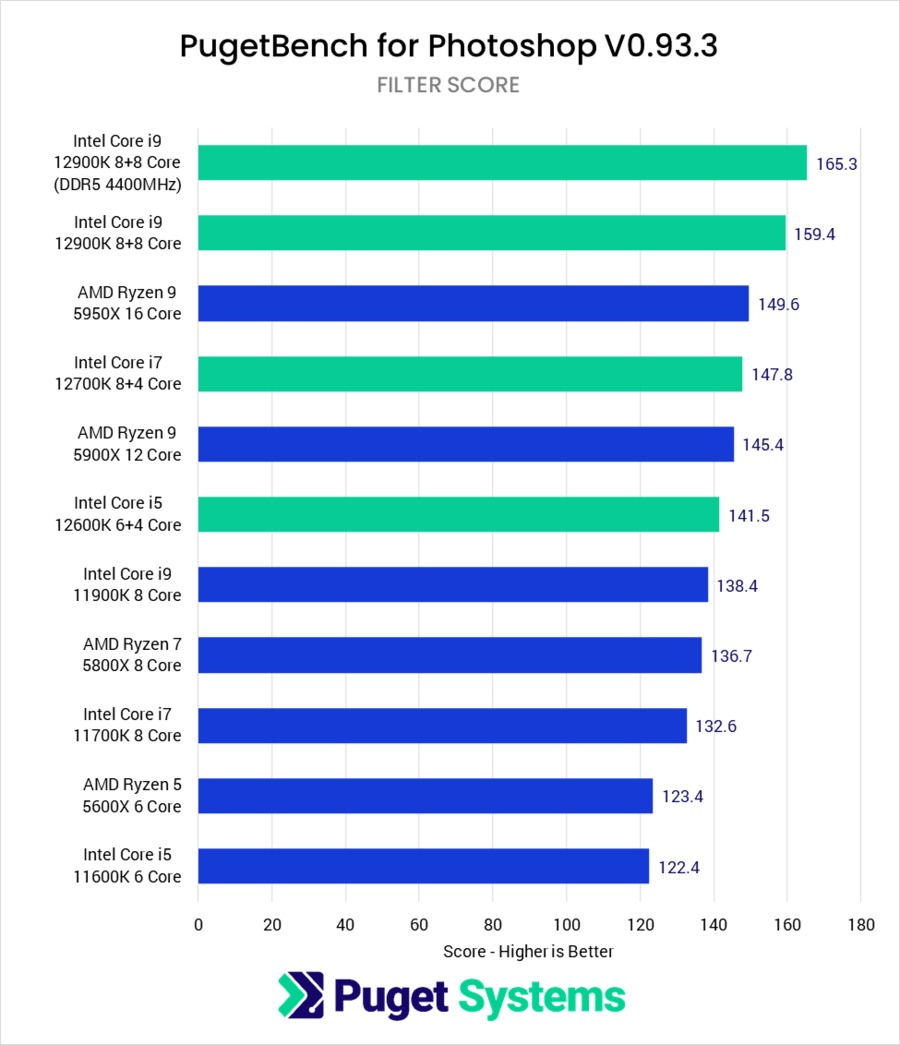 Since Photoshop is largely single-threaded, the new hybrid architecture shouldn't impact performance too much unless it were to accidentally run on one of the E-cores. Luckily, it appears that Thread Director is working as intended, allowing Photoshop to see some decent performance gains.

At the top of the chart, we have the new Intel Core i9 12900K and i7 12700K taking the top spots. The i9 12900K comes in at about 8% faster than the comparably priced AMD Ryzen 5900X, or 6% faster than the more expensive Ryzen 5950X. DDR5 memory actually doesn't make a big impact for Photoshop (unlike most of the other applications we tested), so using DDR5 only improves these numbers by a few percent.

Moving down one step, the i7 12700K also scored higher than all of the AMD CPUs we tested, although it was essentially on par with the Ryzen 5900X and 5950X. But compared to the similarly priced Ryzen 5800X, the i7 12700K ended up performing about 5% faster overall.

Further down the product stack, the Core i5 12600K also does very well. Compared to the similarly priced Ryzen 5600X, it is about 11% faster overall, which puts it on par with the Ryzen 5800X or the Intel Core i9 11900K from the previous generation.

What this means is that for Photoshop, the new Intel 12th Gen CPUs perform about one level above their AMD counterparts. For example, in terms of pricing the i7 12700K costs about the same as the Ryzen 5800X, yet it performs at (or above) the Ryzen 5900X. 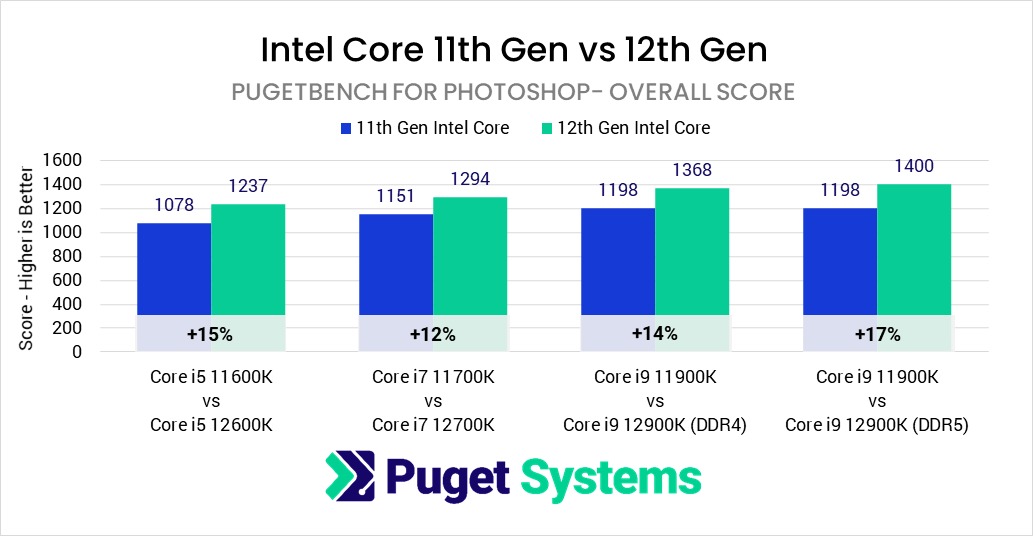 Versus the previous 11th Gen Intel Core processors, the new 12th Gen CPUs are all significantly faster, scoring anywhere from 12% to 15% higher on average.

This is a bit more than what we typically see from Intel for gen-over-gen performance gains in Photoshop but not as significant as what we saw in other applications like Premiere Pro and After Effects. A big part of this is likely due to the fact that Photoshop is primarily a single-threaded application, so the hybrid architecture doesn't come into play as much. Instead, it is the per-core performance from the P-cores which impacts performance which, while obviously improved in the 12th Gen CPUs, isn't as impactful as what other applications are able to see with the hybrid architecture.

Interestingly enough, DDR5 doesn't make all that much of a difference in Photoshop. In most of the other applications we tested, DDR5 gave roughly a 10% increase in performance over DDR4, but for Photoshop the difference was within the margin of error.

Are the 12th Gen Intel Core Processors Good for Photoshop?

Unlike most of the other applications we tested, DDR5 isn't likely to change things much for Photoshop as we only saw a marginal increase in performance with DDR5 that was easily within the margin of error for this kind of real world tests. But even with DDR4, if you are looking to get the best performance in Photoshop, the 12th Gen Intel Core CPUs are the way to go.

Keep in mind that the benchmark results in this article are strictly for Photoshop and that performance will vary widely in different applications. If your workflow includes other software packages (we have similar articles for Premiere Pro, After Effects, Lightroom Classic, and DaVinci Resolve), you need to consider how the system will perform in those applications as well. Be sure to check our list of Hardware Articles to keep up to date on how all of these software packages – and more – perform with the latest CPUs.