Skip to content
Always look at the date when you read an article. Some of the content in this article is most likely out of date, as it was written on October 21, 2013. For newer information, see our more recent articles. 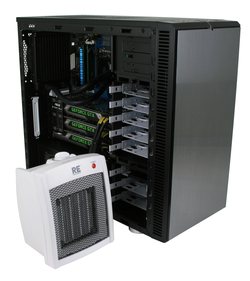 Winter is coming, and with the power bills stacking up it may be hard to justify gaming on your ultra-powerful gaming rig. But what if we were to tell you that, watt for watt, your gaming PC produces exactly the same amount of heat as a space heater? Suddenly you don't have to feel like your gaming habits are costing you tons of money during the winter. If the same amount of power is used either way, you might as well be entertained while your power bill racks up!

You may think that a space heater, which is created solely for producing heat, would be better suited to the task of warming up a room than a computer. But when you think about it, nearly everything that a computer does ends up creating heat. And if you have ever touched a high-end gaming PC after an intense gaming session, you know that computers can be very good at generating heat.

So to find out if a gaming PC is really just an oversized space heater with the advantage of providing entertainment, we decided to compare the heat output of a common space heater to a high-end gaming rig.

To compare the thermal output of a space heater and a gaming PC, we used one of the many small space heaters we have around the office and built a gaming PC that drew roughly the same wattage. The space heater we used was a $25 HC-0114T 1000/1500W space heater that can be found under various brand names. When we measured the power draw, we found that on the low setting it pulled 870-890 watts depending on how hot the heater was. This is a lot of power and we ended up needing a gaming PC with three NVIDIA GTX Titans in triple SLI running Furmark to match the power draw.

To compare the thermal output of both devices, we put both the space heater and PC (with the keyboard, mouse, and monitor) in a closed room and took continuous measurements of the air temperature within the room. This room measured about 10' x 10.5' with a total volume of just under 940 cubic feet. All incoming and outgoing ventilation was blocked off to keep it completely isolated from our office's HVAC system and the surrounding office spaces were held at a constant 70 degrees Fahrenheit. 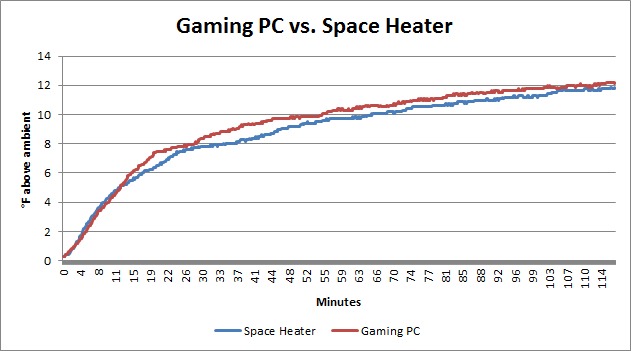 As you can see from the chart above, the gaming PC and space heater performed very close to each other. The times when the gaming PC pulled ahead were when the wattage draw of the PC climbed a bit higher than the space heater before we could manually adjust it down. We tweaked the video card power settings every 20 minutes, but due to how often the fans decided to ramp up or down the results were not quite as straight forward as the space heater results.

Even with these slight variations, the results are close enough for us to confirm that for all intents and purposes a PC and space heater will output the same amount of heat when drawing the same amount of wattage from a wall outlet.

However, if your house is freezing and you already have a high performance gaming computer – or you simply want to know that your gaming addiction isn't actually increasing your power bill in the winter- our testing shows that a PC is just as efficient at creating heat as a space heater. In fact, you could even set the computer to mine bitcoins to make a heat generator that helps pay for itself! So when you wake up or get home to a freezing cold room, start up those games, [email protected] programs, or benchmarks to get your room nice and warm. Its just as efficient as using a space heater, and much more entertaining.