Before we get into the meat of this article, we want to make something very clear: Photoshop is not at all a target application for AMD's new Threadripper 3990X processor. This CPU is a wonder of technology with 64 cores (which is 3.5x more cores than Intel's current X-series CPUs), but there are very few tasks in Photoshop that can take effectively utilize this many cores. In general, there is little benefit to having more than 6-8 CPU cores for Photoshop, which leads to CPUs in the $500 price range being as fast (or faster) than CPUs that are considerably more expensive.

In fact, some applications can actually see a decrease in performance with more CPU cores, which is honestly the main reason why we are doing this testing. It is very unlikely that this processor will break any Photoshop performance records, but given how ubiquitous Photoshop is in a variety of industries, it will be valuable to know whether this processor may pose issues for people who use Photoshop in more of a secondary role. 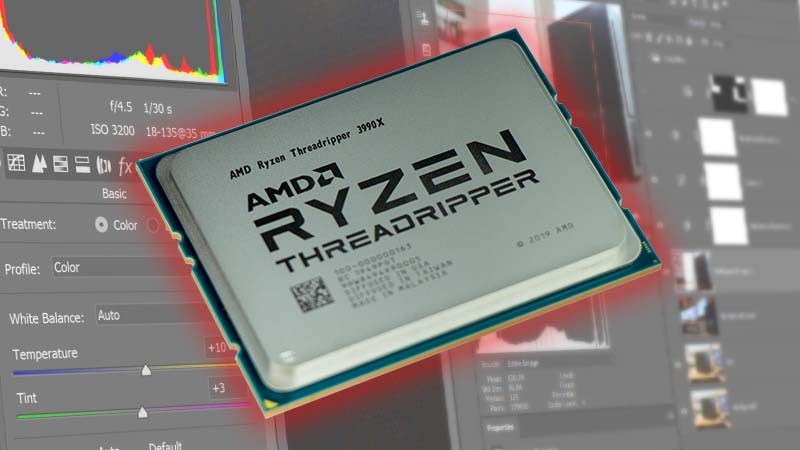 In this article, we will be examining the performance of the AMD Threadripper 3990X 64 Core CPU in Photoshop as compared to the latest AMD Threadripper, AMD Ryzen, Intel X-series, and Intel 9th Gen processors. If you are interested in how this CPU performs in other applications, we also have several other articles for Premiere Pro, After Effects, Lightroom Classic, DaVinci Resolve, and more available on our article listing page. 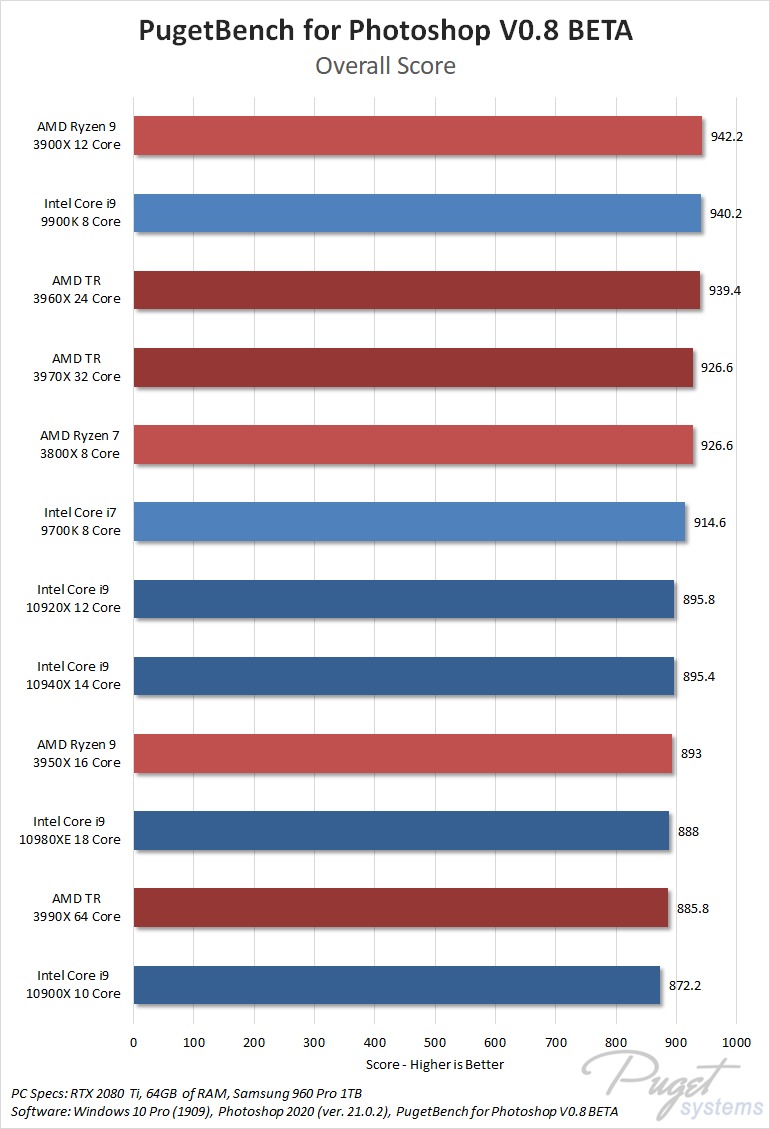 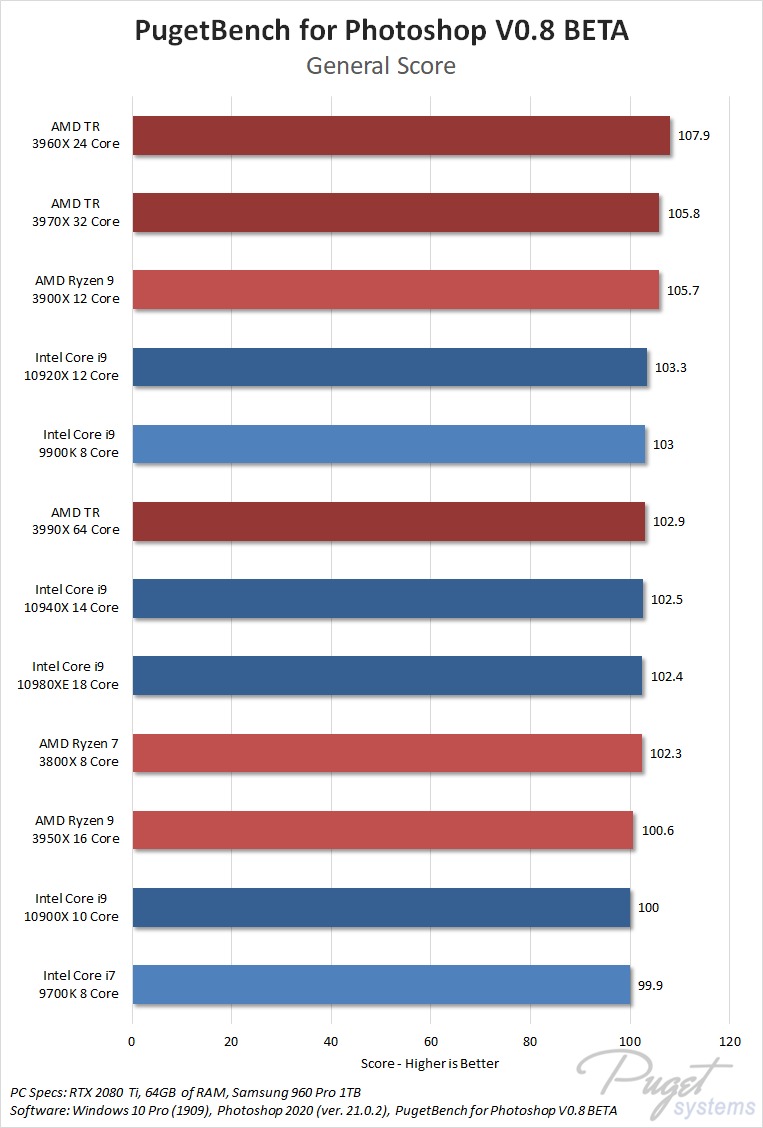 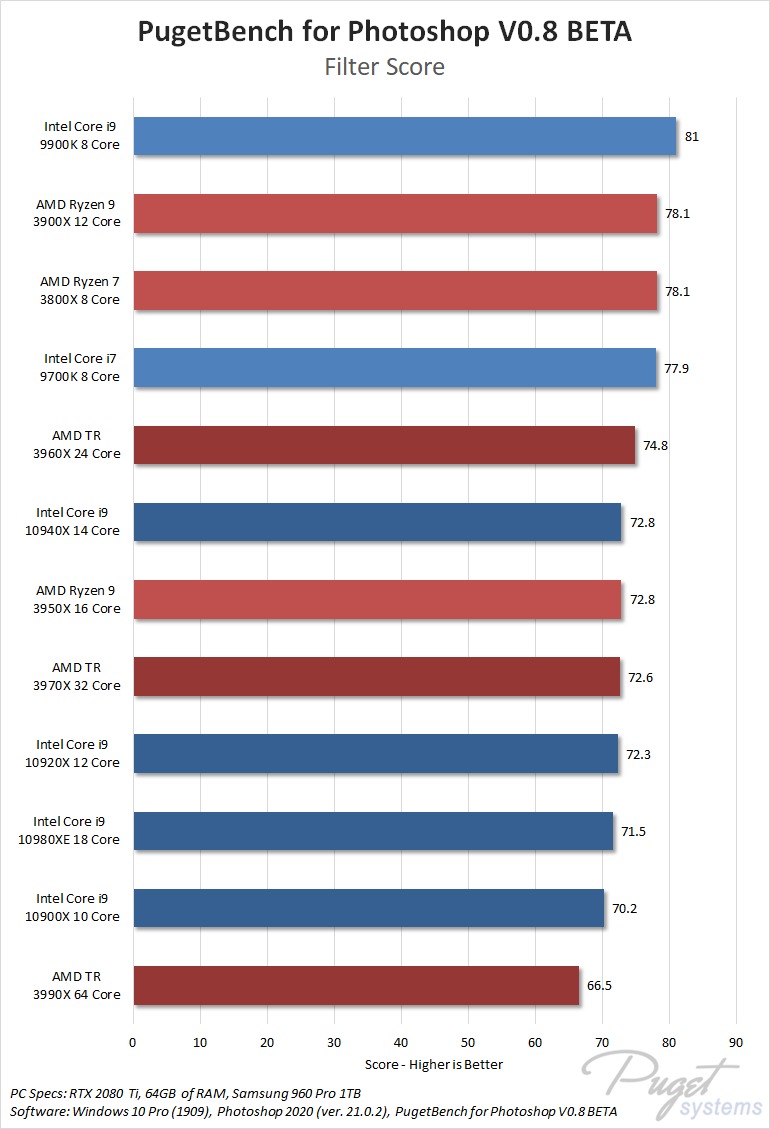 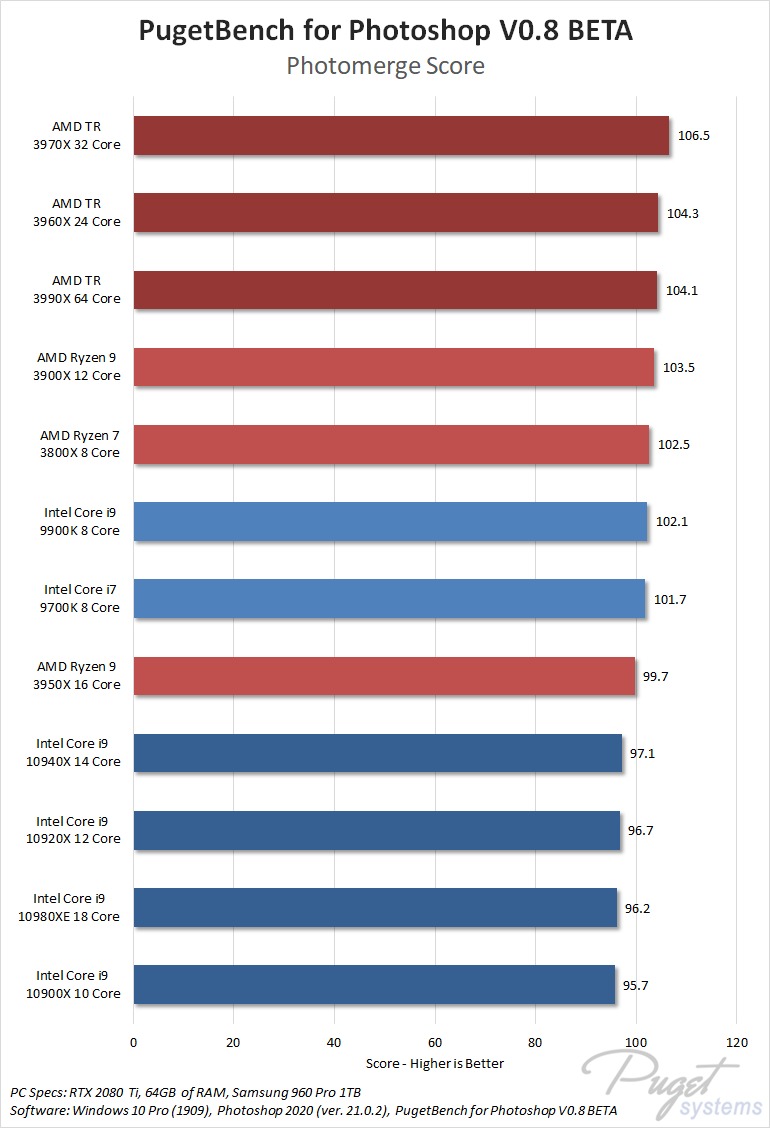 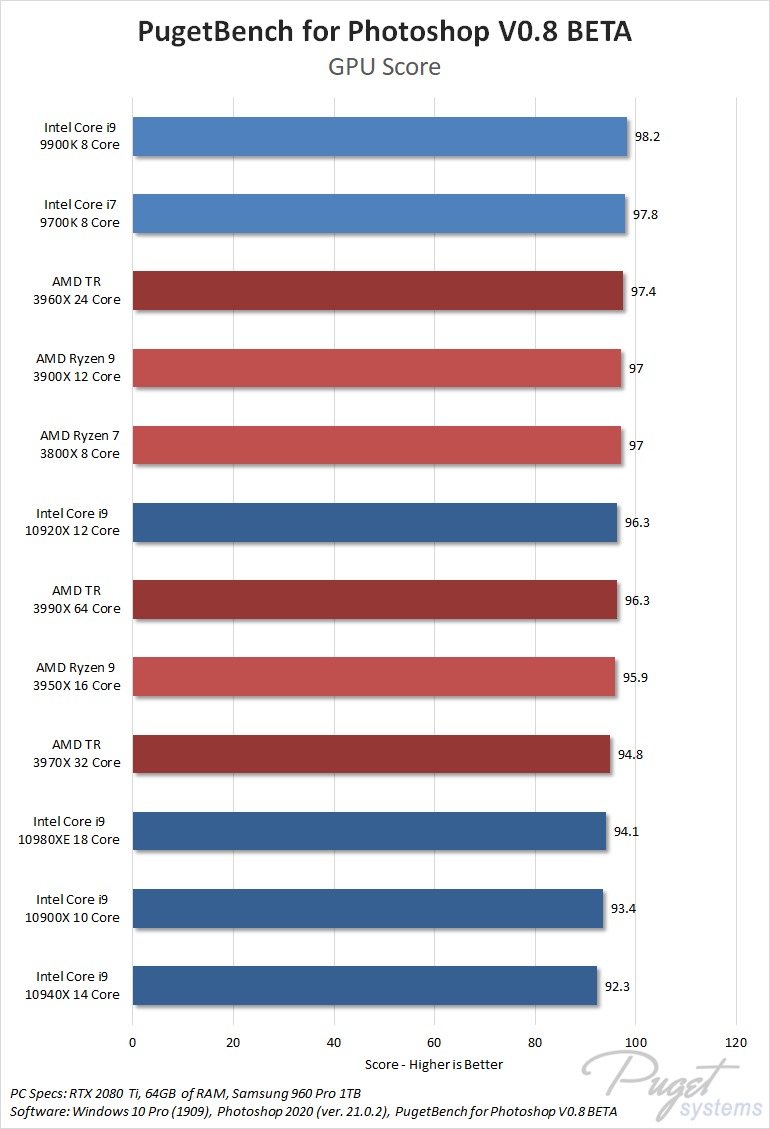 As we mentioned at the start of this post, Photoshop does not typically use more than a handful of CPU cores which means that the "per-core" performance (determined by the Turbo clocks) is typically what determines how well a CPU will perform. And since most modern CPUs have very similar "Max Turbo" speeds, all the CPUs we tested should perform very similarly.

If we wanted to nit-pick at the results, we could declare that the AMD Threadripper 3990X is not a good choice for Photoshop since it scored lower than almost every other CPU we tested. While this certainly means we would never recommend the 3990X (or any HEDT processor for that matter) to someone building a dedicated Photoshop workstation, it also isn't going to be significantly worse than other processor options. At most, the 3990X will be ~6% slower than the fastest CPU Photoshop, and while that may be important for some users, if you using Photoshop in more of a secondary role it is unlikely to be noticeable in the real world.

In fact, one of the most interesting aspects of these results is how similar the performance lines up with the "Maximum Turbo Boost" frequency for each CPU. You can't compare raw frequency between AMD and Intel (or even between different model lines within the same brand), but the Threadripper 3990X ended up scoring about 5% lower than the 3960X/3970X, which almost exactly lines up with its 5% lower Max Turbo frequency (4.6GHz vs 4.5GHz). This also applies on the Intel side where the Core i9 10900X (which has about a 2% lower Turbo Boost 3.0 frequency than the other X-series models), performed about 2% slower than the other X-series CPUs.

Is the AMD Threadripper 3990X good for Photoshop?

While the AMD Threadripper 3990X performs just fine in Photoshop, in most cases it is not going to be an optimal choice for a Photoshop workstation. Most users will be better off with a far less expensive (yet slightly faster) CPU like the Intel Core i9 9900K or AMD Ryzen 9 3900X and spending the cost difference on more RAM, faster storage, or other upgrades that will make their system even faster. Photoshop has few ways to leverage more than a few CPU cores for most tasks, which simply means that a massive CPU like the 64-core 3990X is complete overkill.

However, that isn't to say that the 3990X won't work for Photoshop, or that it will even be noticeably slower since the performance delta between the fastest and slowest CPU we tested was only about 8%. There may be no reason to spend the money on a 3990X for Photoshop alone, but if Photoshop is just one of many applications you use (and those other applications can benefit from having 64 cores), you can at least be confident that the Threadripper 3990X will get the job done.

Keep in mind that the benchmark results in this article are strictly for Photoshop and that performance will vary widely in different applications. If your workflow includes other software packages (we have similar articles for Lightroom Classic, Premiere Pro, After Effects, DaVinci Resolve, and many others), you need to consider how the processor will perform in all those applications. Be sure to check our list of Hardware Articles to keep up to date on how all of these software packages perform with the latest CPUs.