The Threadripper platform as a whole is terrific for those that need 256GB of system memory, but the AMD Threadripper 3990X 64 Core in particular is completely unnecessary. In almost every case, the 3960X 24 Core is both faster and cheaper, and if you do not need 256GB of RAM, the Intel Core i9 9900K or AMD Ryzen 9 3900X perform on par at a fraction of the cost.

If you have been in the motion graphics or VFX industry for quite a while, you may remember the days when After Effects included a feature called "Render Multiple Frames Simultaneously". This feature allowed After Effects to split up your render on the fly between all the CPU cores in your system and made Ae perfect for high core count systems. Due to a number of reasons, however, Adobe removed this feature back in 2014 and instead focused heavily on GPU acceleration.

This shift in priorities resulted in some tremendous performance gains, but it completely changed what the "ideal" processor was for After Effects. Instead of dual Xeon or other high core count options, suddenly AMD and Intel's consumer CPUs (with only a handful of cores) were the fastest processors you could get.

For most users, this makes AMD's new Threadripper 3990X 64 core processor complete overkill as After Effects currently has no native way to take advantage of all these cores. However, you can still spread your renders across multiple cores with plugins like Render Garden, BG Renderer MAX, or your own scripts utilizing AERender, which may make the 3990X perfect for those that leverage these plugins.

Even in the case of these multi-core render plugins, you often can only split up the render about a dozen times before you either do not see a significant performance gain, or require huge amounts of RAM/VRAM in order to successfully complete the render. Because of these factors, we truly are not quite sure how the 3990X will perform in these types of After Effects workflows. 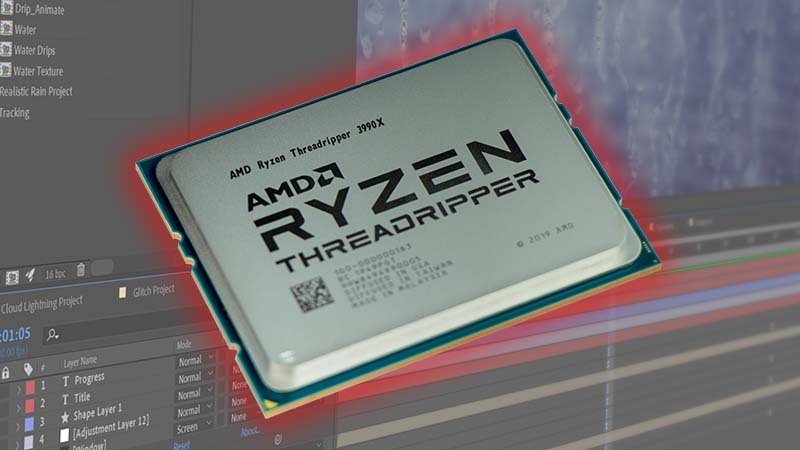 In this article, we will be examining the performance of the AMD Threadripper 3990X 64 Core CPU in After Effects as compared to the latest AMD Threadripper, AMD Ryzen, Intel X-series, and Intel 9th Gen processors. If you are interested in how this CPU performs in other applications, we also have several other articles for Photoshop, Premiere Pro, After Effects, DaVinci Resolve, and more available on our article listing page.

While our benchmarks presents various scores based on the performance of each test, we also like to provide the individual results for you to examine. If there is a specific task that is a hindrance to your workflow, examining the raw results for that task is going to be much more applicable than the scores that our benchmark calculated.

Feel free to skip to the next sections for our analysis of these results to get a wider view of how each CPU performs in After Effects. 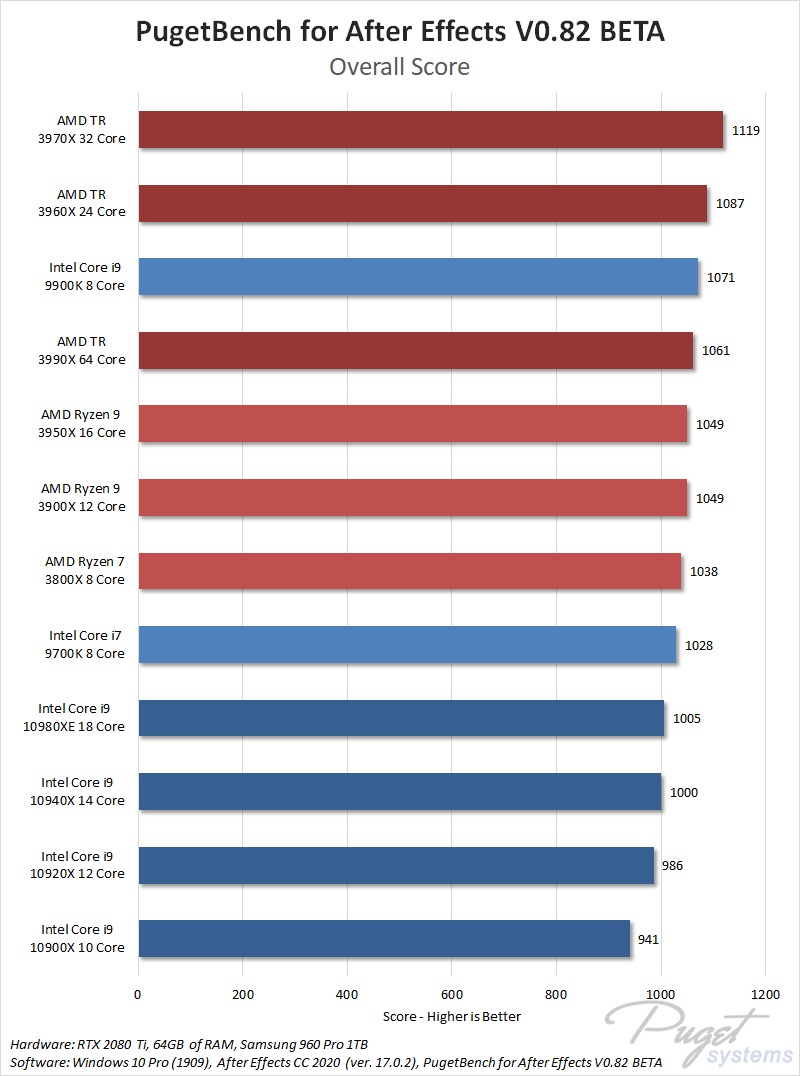 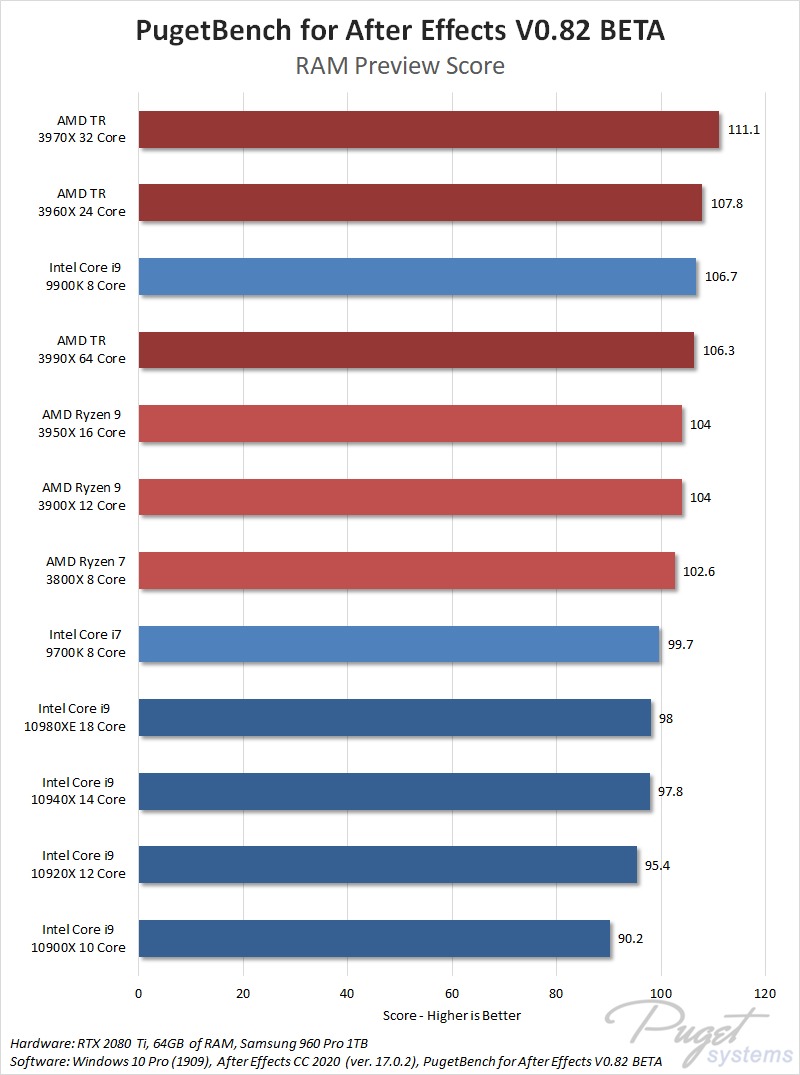 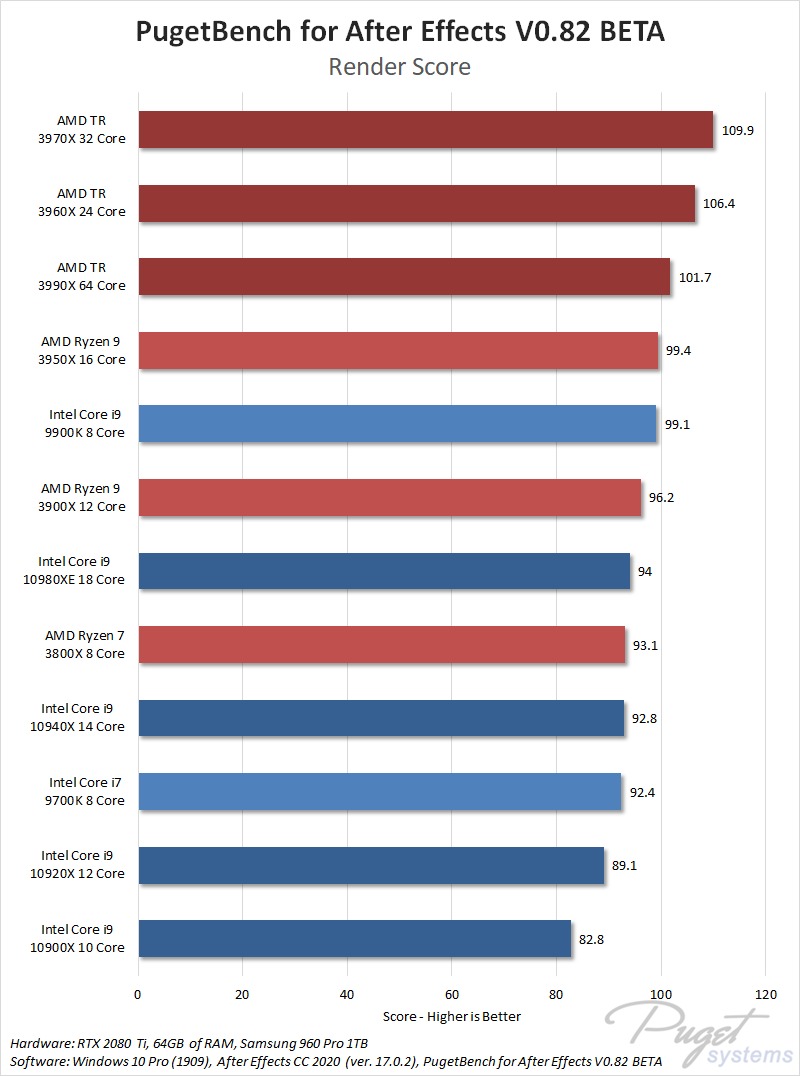 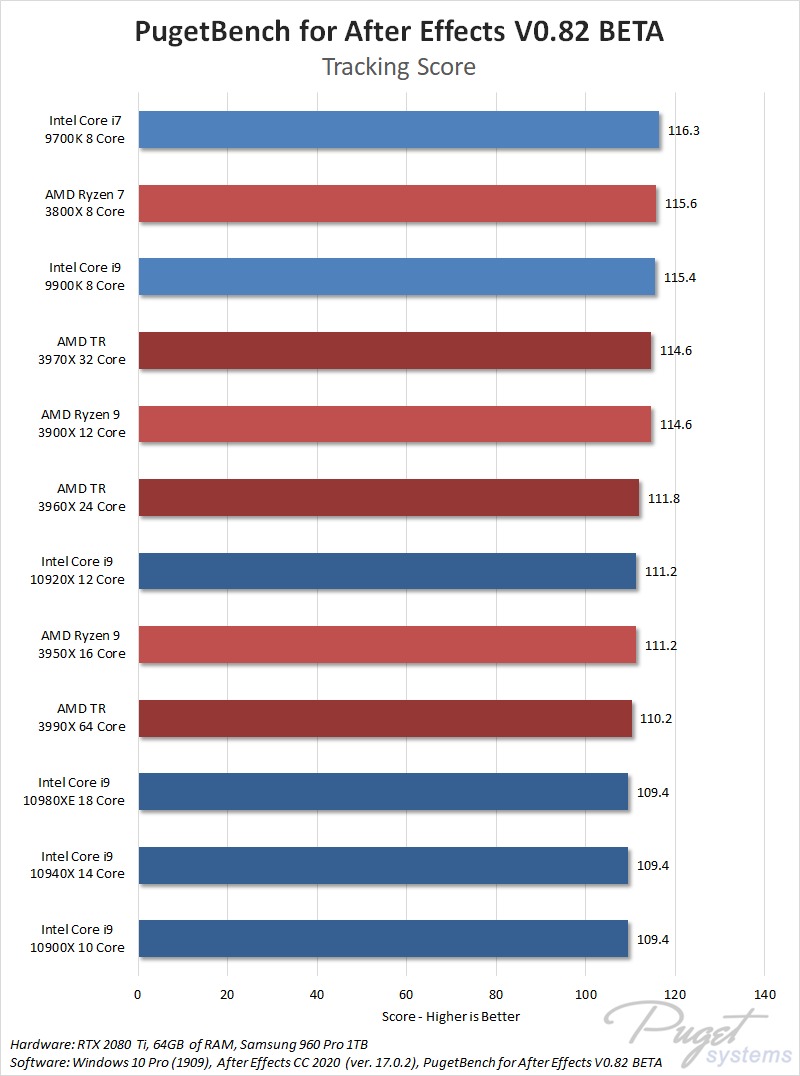 Since After Effects typically only uses a handful of CPU cores, there is only about a 20% performance difference between the fastest and slowest CPU we tested. Interestingly enough, it is more the overall product line that determines performance, rather than the number of cores each CPU has. In fact, it is worth pointing out that many of the more economical processors like the Intel Core i9 9900K or AMD Ryzen 9 3900X perform within a few percent of the more expensive options like the AMD Threadripper 3970X 32 Core.

When it comes to the AMD Threadripper 3990X 64 Core in particular, the performance is not bad, but also not better than many other options that cost significantly less. For example, both the Threadripper 3990X and the Core i9 9900K scored almost exactly the same, yet the 3990X costs eight times more! Even if you want the larger memory capacity or higher PCI-E lane count of Threadripper, the 3960X is still a bit faster at roughly a third the cost. 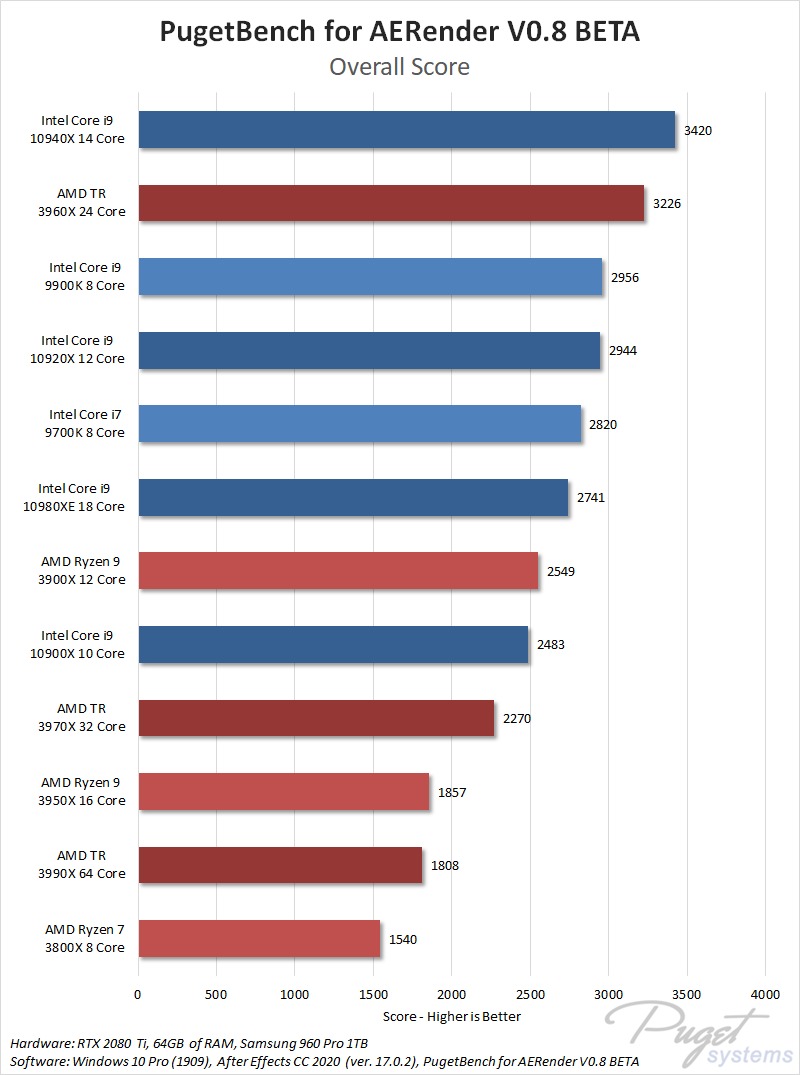 As we mentioned in the introduction, there are ways to split your render across multiple threads by using plugins like Render Garden, BG Renderer MAX, or your own scripts via AERender. However, there are limits to how effective this can be. With our test projects, we typically find that about a 3x increase in performance is the most we ever see and while other projects may see larger benefits, you should not expect it to scale perfectly.

Another limitation is that for each render thread you spawn, you need to have more and more system RAM and VRAM. Two threads will require 2x more RAM/VRAM than normal, four threads will require 4x, and so on. Our test projects are relatively light-weight, so even with just 64GB of RAM we can typically spawn up to ~24 threads, but many real-world projects will be limited to significantly fewer threads.

With all that explained, the results of our AERender benchmark took us completely by surprise. We thought that the Threadripper 3990X 64 Core would do well in this test, but it was actually one of the slowest CPUs we tested. Another oddity is that the Threadripper 3970X 32 Core was significantly slower than the Threadripper 3960X 24 Core. RAM/VRAM capacity may be a part of this, but we were able to successfully spawn ~24 threads on each of these CPUs. Compared to something like the Intel Core i9 10940X where we only ever spawned a maximum of 14 threads (we limit the maximum render threads to the number of cores the CPU has), this in theory should result in better performance from the Threadripper CPUs.

This goes to show that you cannot make any assumptions when it comes to real-world performance. Just looking at the number of render threads we were able to spawn, and the performance of each CPU in our After Effects benchmark, these results are almost the exact opposite of what you might expect. But like Shakira said during the Super Bowl halftime show, "these hips benchmark results don't lie".

Is the AMD Threadripper 3990X good for After Effects?

Even in our AERender benchmark (which spawns multiple render threads in order to improve render times), the 3990X fared poorly. This is the kind of workload that you might expect the 3990X to excel in, yet the AMD Threadripper 3960X 24 Core or Intel Core i9 10940X were both almost 2x faster than the 3990X.

To be fair, it isn't all bad news for the 3990X. Disregarding the price, it performed within about 5% of the fastest CPU we tested which is unlikely to be noticeable in the real world. So if your workflow involves other applications that are able to utilize all of these cores, you can at least be confident that choosing the 3990X is not going to result in lower performance in After Effects. It just isn't a very good choice if performance in After Effects is your primary concern.

Keep in mind that the benchmark results in this article are strictly for After Effects and that performance will vary widely in different applications. If your workflow includes other software packages (we have similar articles for Photoshop, Lightroom Classic, Premiere Pro, DaVinci Resolve, and many others), you need to consider how the processor will perform in all those applications. Be sure to check our list of Hardware Articles to keep up to date on how all of these software packages perform with the latest CPUs.