AMD has launched a new top-end CPU, equipped with a whopping 64 cores: the Threadripper 3990X. We have tested this new chip in a wide range of applications, from video editing to photogrammetry, but this article is looking specifically at Metashape. Keep reading to find out how the 3990X stacks up against fellow Threadripper models as well as a mix of Intel and AMD's other desktop processors. 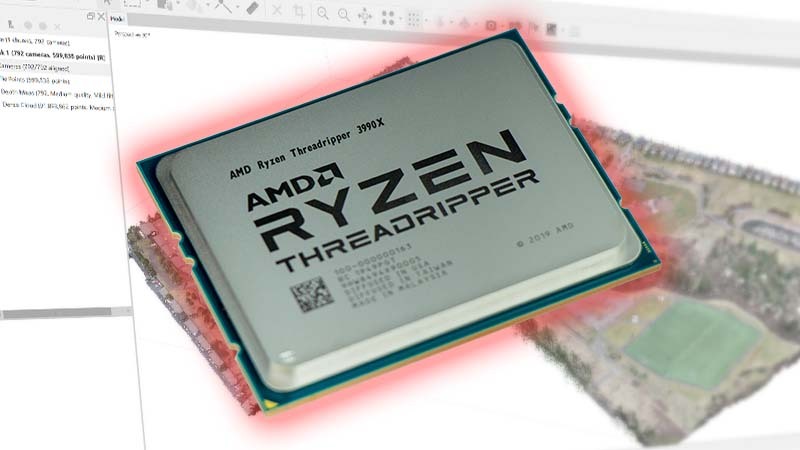 For this article, we are primarily interested in how this new AMD Threadripper 3990X compares to other current-generation processors. The focus is on photogrammetry processing in Agisoft Metashape, using a benchmark tool we developed here at Puget Systems. More info about this utility is available in the Benchmark Details.

Additionally, it is worth pointing out that the CPU cooler we used for testing the new TR 3990X is somewhat borderline for how much heat this processor can potentially put out. In the systems we build with this chip going forward, we will be utilizing a larger heatsink and fan to ensure maximum performance even under extended loads – but in the open-air testbeds we use here in our lab, we found that the cooler we used did not lead to throttling.​​

For benchmarking photogrammetry applications we now have four image sets that we own the rights to, covering both smaller and larger size Model and Map projects. All of these image sets are available in our public Metashape benchmarks, split up to allow quick or extended tests, which you can download and run if you want to compare your system's performance to what we measured for this article. 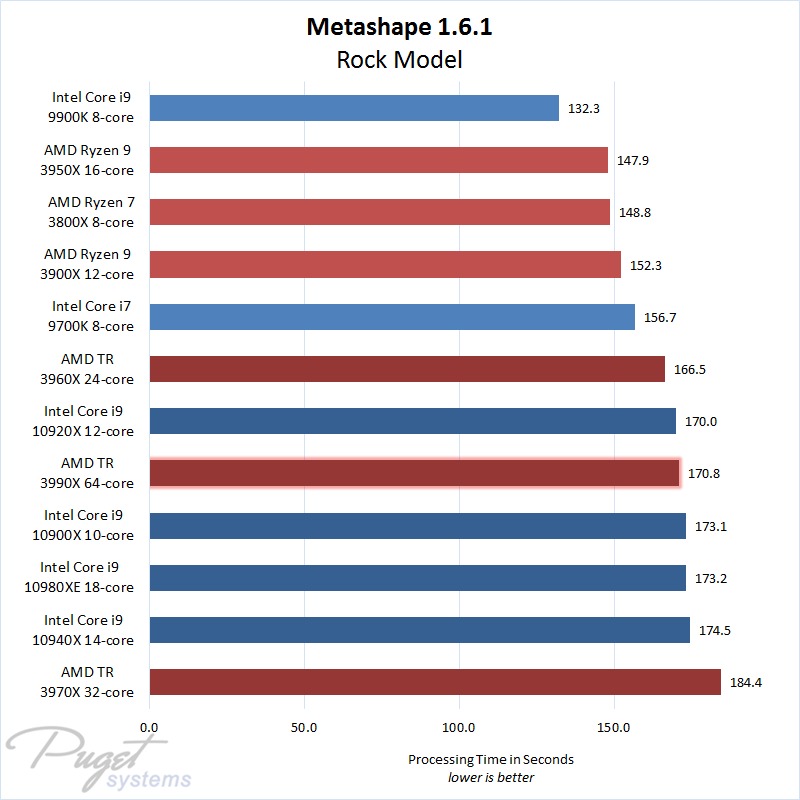 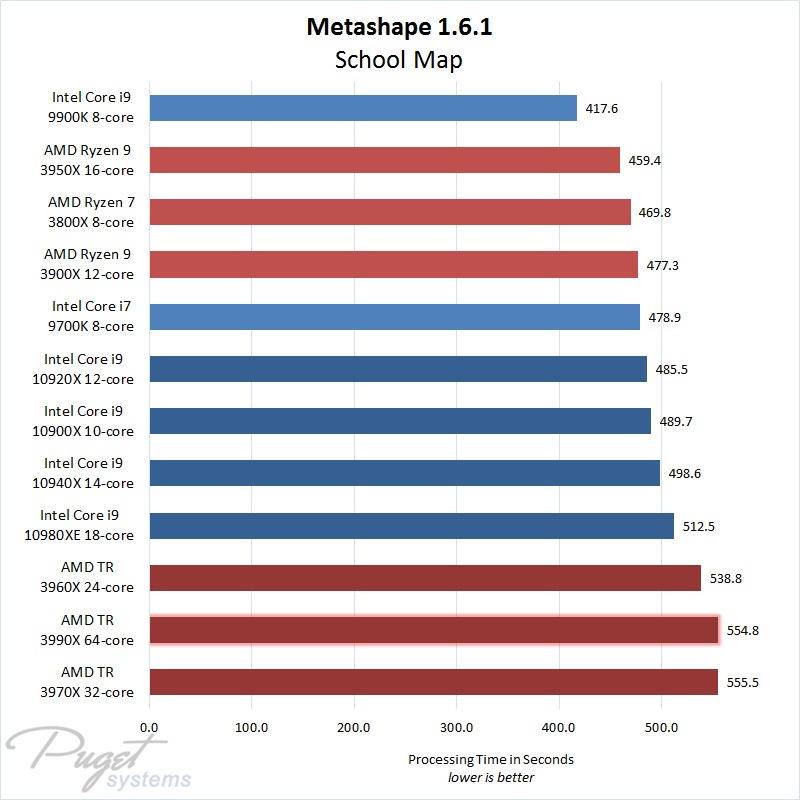 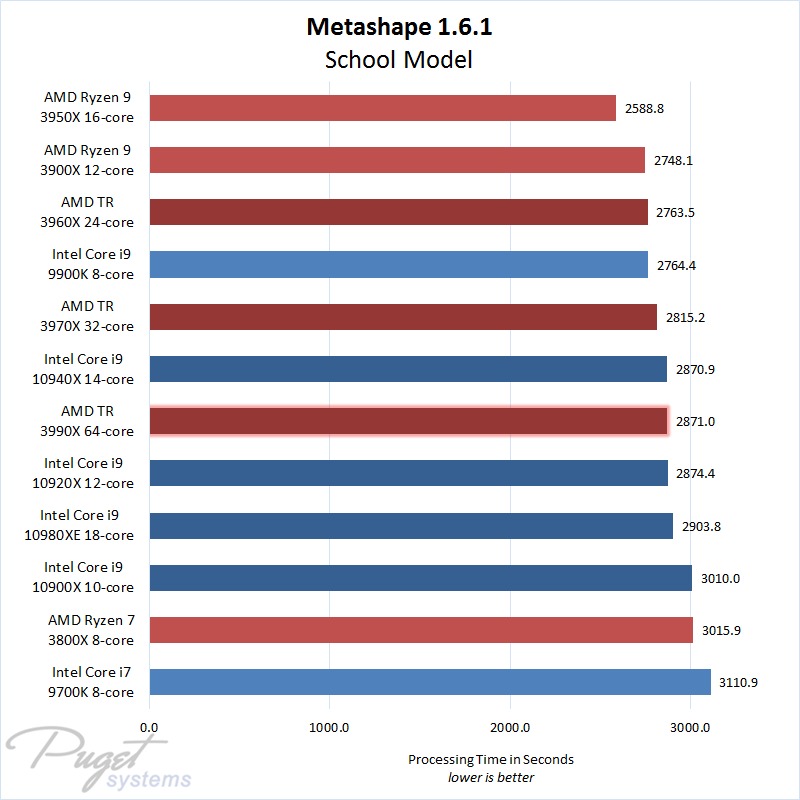 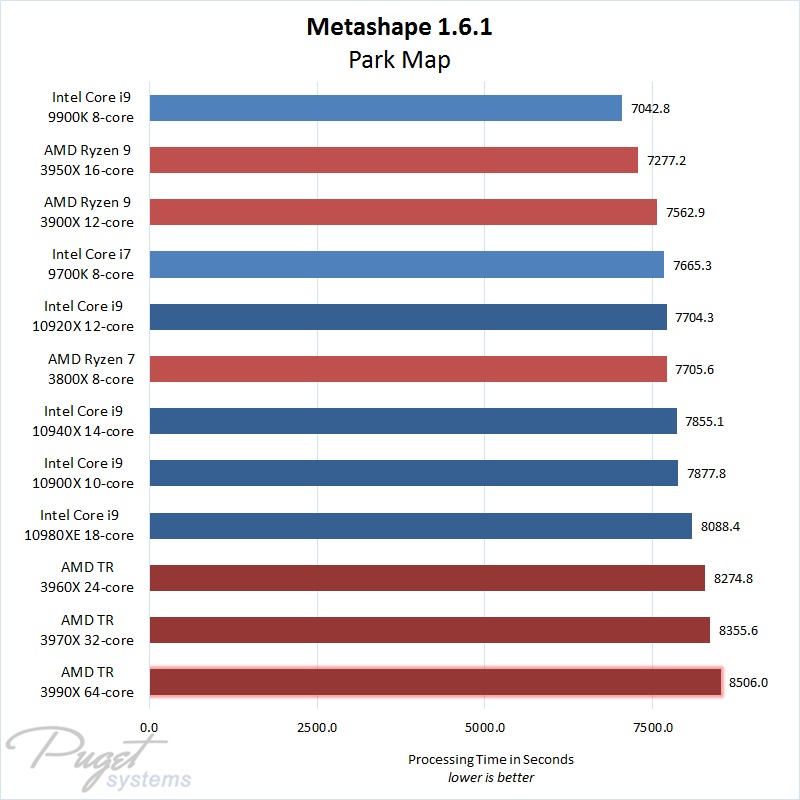 For those who want to dig into how each CPU performed in the various processing steps within Metashape, here is a full results table:

Unfortunately for the 3990X, Metashape favors clock speed and appears to effectively utilize only a moderate amount of cores. Intel's Core i9 9900K & i7 9700K, along with AMD's Ryzen 8- to 16-core processors, consistently led with the best performance in our tests. Both families of "high end desktop" (HEDT) chips – Intel's Core X line and AMD's Threadrippers – were slower, with their best showing in the larger of our two model image sets. Even there, though, the higher price tags of these processors keeps them from being viable.

Unfortunately, no: the 3990X (and other AMD Threadripper processors) are simply not a good fit for Agisoft Metashape.

Instead, go with AMD's Ryzen family or Intel's mainstream Core series (not the Core X line!) to get both the best performance and the most value for your money when running Metashape.