In many ways, Lightroom Classic has a split personality when it comes to processors. Most of the "active" tasks like scrolling through images, switching modules, or using brushes are only able to effectively utilize a handful of CPU cores which makes the consumer CPUs from Intel or AMD an ideal choice. On the other hand, many of the "passive" tasks like exporting or generating smart previews are fairly well optimized for multi-threading, making the higher core count CPUs like those found in Intel and AMD's HEDT (High-End Desktop) product lines a viable option.

With AMD's launch of the Threadripper 3990X 64 Core CPU, however, it is very likely that we are well past the point where more cores will be able to give us better performance. If you want to get into the math of it, you can read up on a mathematical formula called Amdahl's Law, but the crux of the issue is that very few tasks are perfect at scaling across multiple CPU cores, and even a tiny .01% drop in parallel efficiency can make a CPU like the 3990X 64 Core give only marginal performance gains over a CPU with half the number of cores.

In fact, some applications can actually see a decrease in performance with more CPU cores, which can be very disappointing if you expect to always get more performance from a more expensive CPU. Given the cost of the 3990X (which has a very easy to remember MSRP price of $3,990), it is very unlikely to be a "must buy" CPU for Lightroom Classic users, but the question is whether or not there are any niche users who will benefit from this extremely powerful CPU. 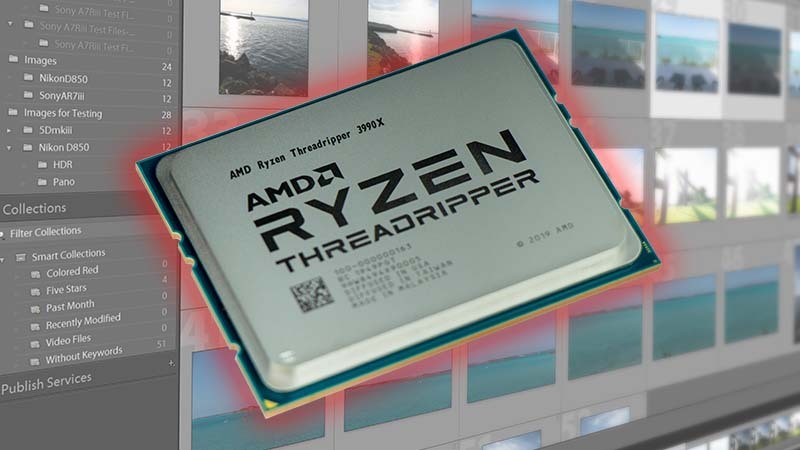 In this article, we will be examining the performance of the AMD Threadripper 3990X 64 Core CPU in Lightroom Classic as compared to the latest AMD Threadripper, AMD Ryzen, Intel X-series, and Intel 9th Gen processors. If you are interested in how this CPU performs in other applications, we also have several other articles for Photoshop, Premiere Pro, After Effects, DaVinci Resolve, and more available on our article listing page.

Feel free to skip to the next section for our analysis of these results to get a wider view of how each CPU performs in Lightroom Classic. 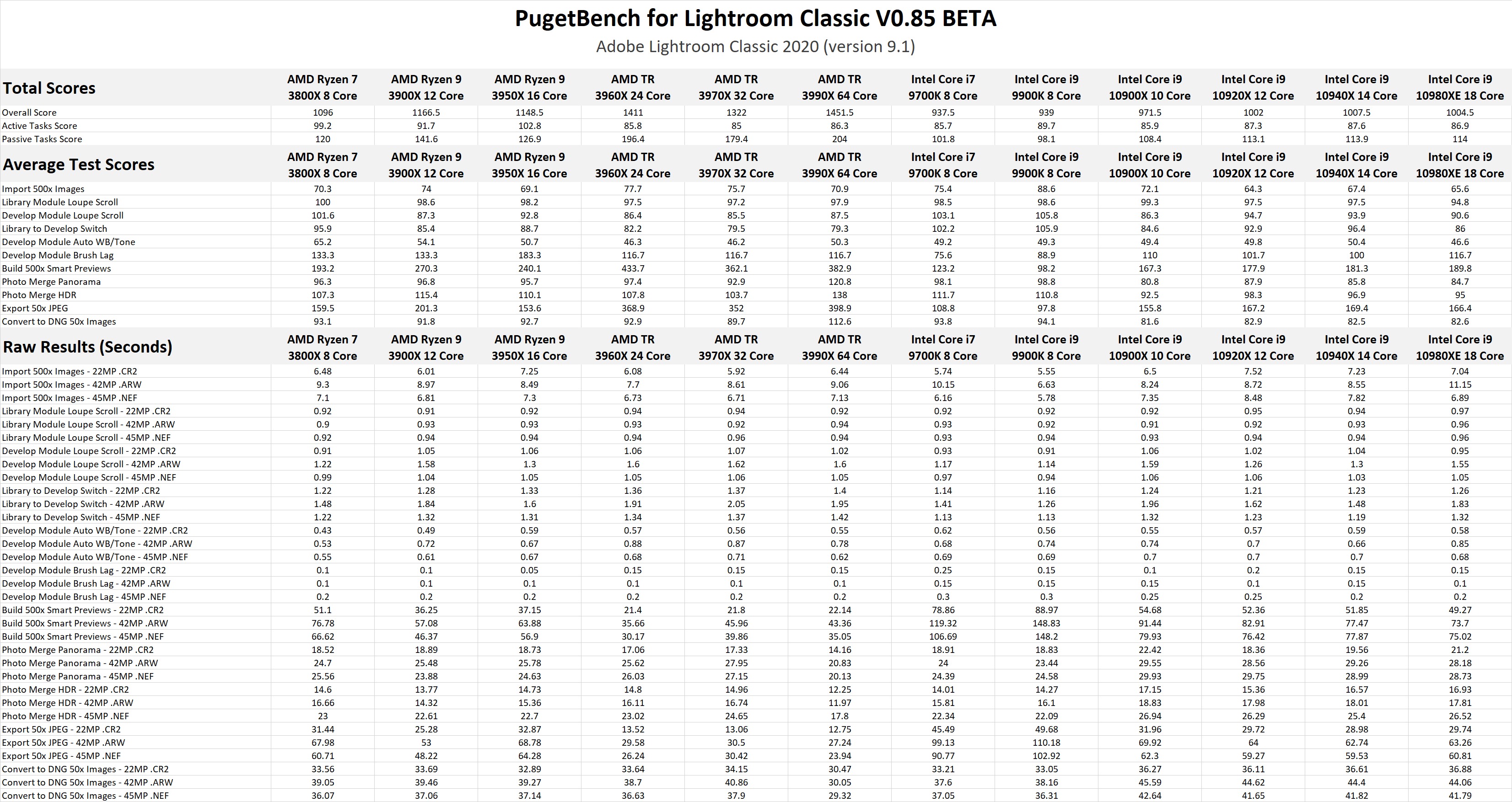 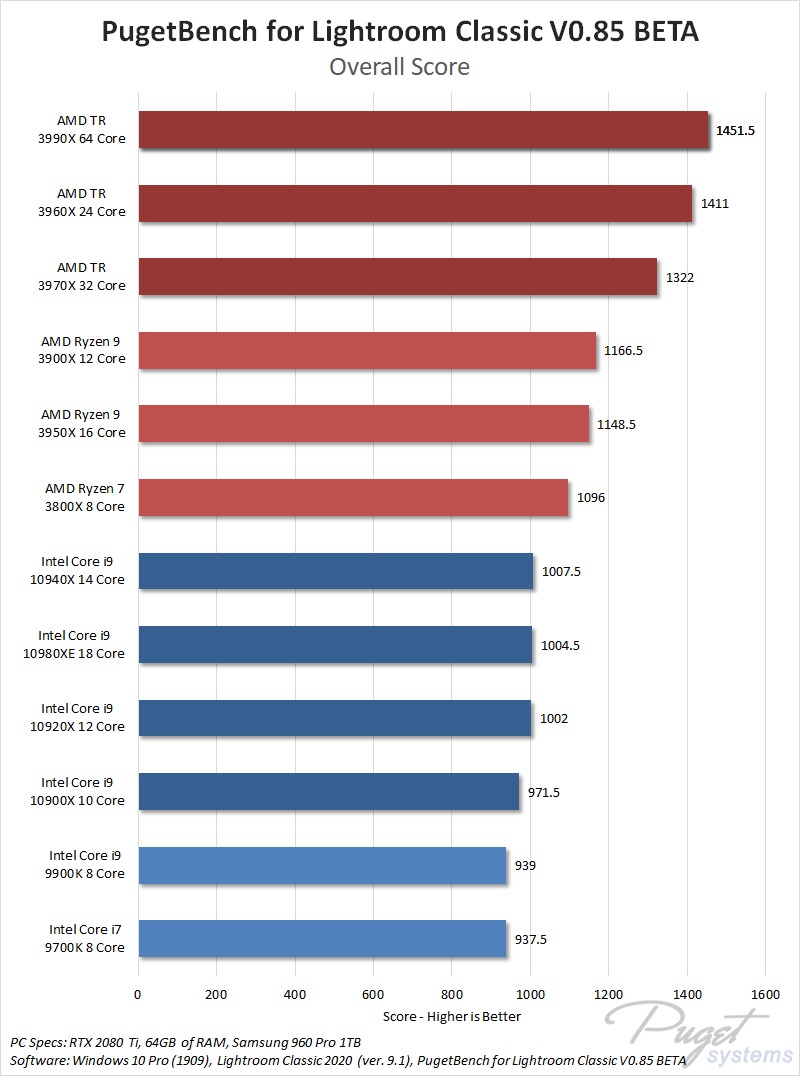 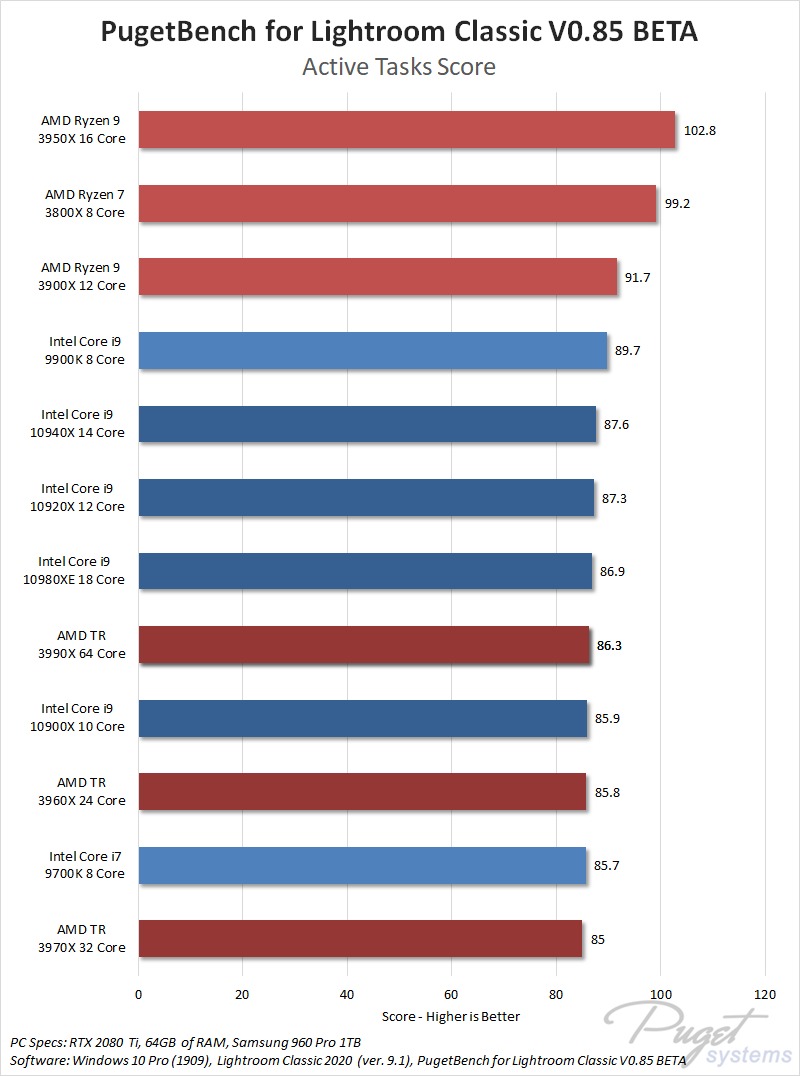 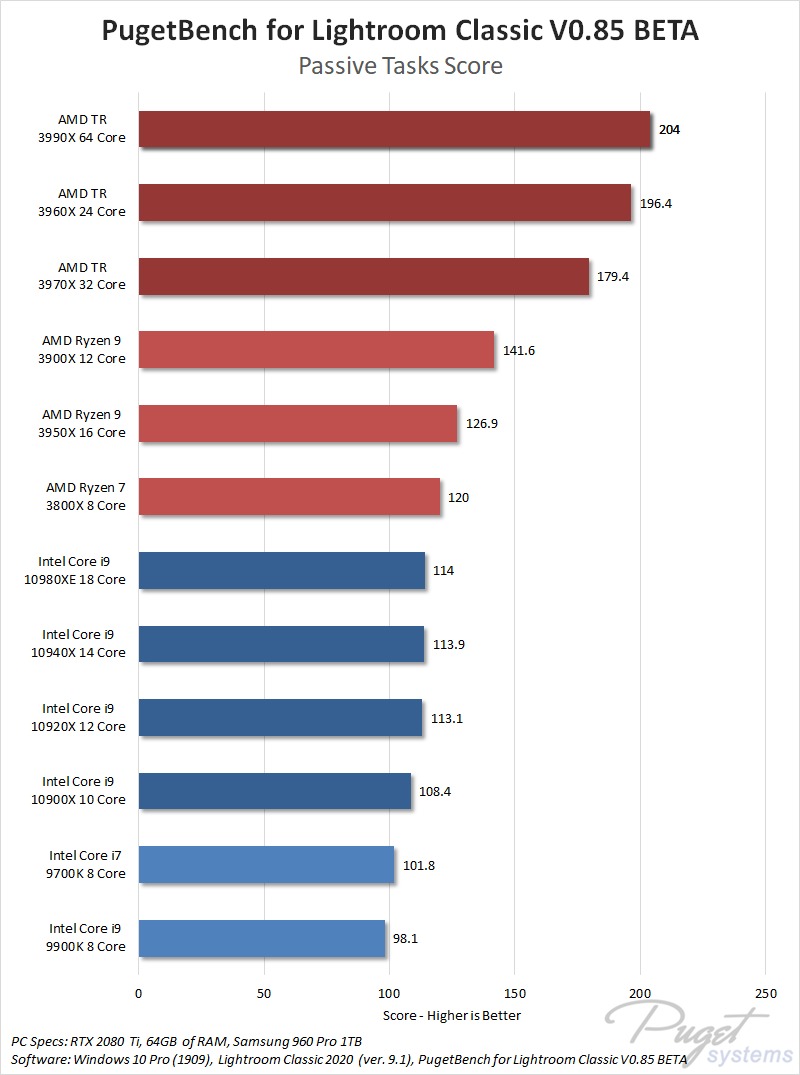 From an overall perspective, the AMD Threadripper 3990X 64 core is technically the fastest CPU we have tested for Lightroom Classic, although it only scored about 3% higher than the much more affordable Threadripper 3960X 24 Core. Even if we only look at the "passive tasks" score where higher core count CPUs tend to do better, the difference between the 3990X 64 Core and the 3960X 24 Core is just a small 4%, which is right at the edge of the margin of error for this kind of real-world testing.

This means that while the Threadripper 3990X does just fine in Lightroom Classic, the Threadripper 3960X is almost always going to be a much better choice as it will free up a significant amount of your budget to get more RAM, faster storage, or other system upgrades that will make much more of an impact than a tiny bump in performance.

We do also want to point out that for most users, we have found that the AMD Ryzen processors like the 3900X and 3950X offer more than adequate performance for passive tasks, while being ~20% faster than Threadripper for active tasks like scrolling through images, switching modules and using brushes. Unless your workflow involves exporting huge numbers of images, you likely will be better off with on of AMD's Ryzen processors as most users tend to prefer a snappier editing experience over faster export times.

Is the AMD Threadripper 3990X good for Lightroom Classic?

Overall, the AMD Threadripper 3990X 64 Core is the fastest CPU we tested for Lightroom Classic, although it is only a few percent faster than the much more affordable AMD Threadripper 3960X 24 Core. Even in passive tasks like exporting which can utilize a decent number of CPU cores, the 3990X has such an absurd number of cores that the performance gain is relatively minor.

For those that want the fastest export times possible, you will likely get better overall system performance with an AMD Threadripper 3960X, and spending the cost savings on other aspects of your system like more RAM or faster storage. The 3990X would certainly get the job done, but just like the majority of other applications, Lightroom Classic simply is not able to effectively leverage such a crazy high number of CPU cores.

For the more "typical" user that is more concerned about performance in active tasks like scrolling through images, switching modules, and using brushes, the AMD Ryzen 3900X or 3950X are likely an even better choice as they can be up to 20% faster than Threadripper in that type of workload.

Keep in mind that the benchmark results in this article are strictly for Lightroom Classic and that performance will vary widely in different applications. If your workflow includes other software packages (we have similar articles for Photoshop, Premiere Pro, After Effects, DaVinci Resolve, and many others), you need to consider how the processor will perform in all those applications. Be sure to check our list of Hardware Articles to keep up to date on how all of these software packages perform with the latest CPUs.