When AMD announced their new Radeon 6800 and 6800XT earlier this year, a lot of people that work with Unreal Engine took notice. Among Virtual Production and ArchViz professionals, one spec stood out in particular, these cards offer 16GB of VRAM. The equivalent priced cards from NVIDIA offer either 8 or 11 GB. If these new Radeon cards can perform somewhat close to what NVIDIA offers, the larger VRAM might be enough to compel professional users to jump to AMD.

The burning question then is, how well do these cards perform in Unreal Engine? Well, that turned out to be more complicated than expected. At the time of writing this article, the most recent public release of Unreal Engine is version 4.25.4. In this version, the cards function fine, and deliver performance similar to that of NVIDIA's 3080 and 3070. The 6800XT and 6800 are only 1 or 2% slower than the 3080 and 3070. 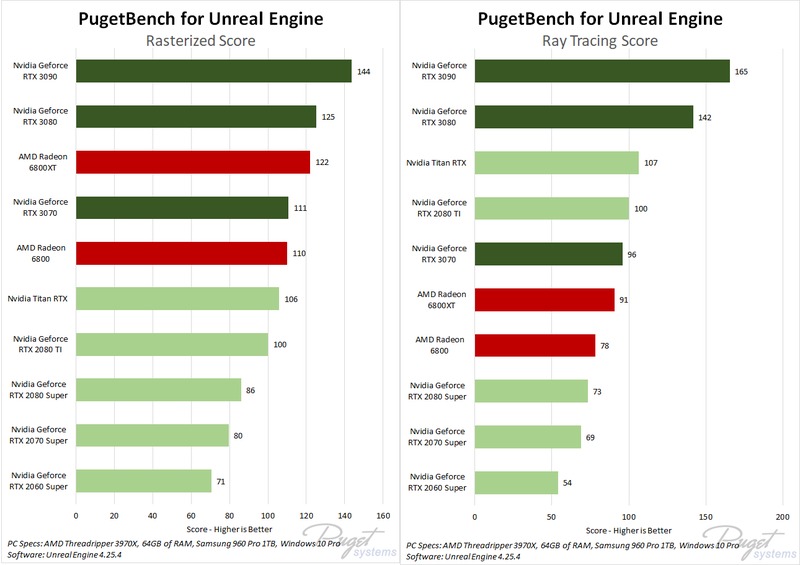 Scores based on average FPS in multiple scenes in both 1080p and 4K resolutions.

With Ray Tracing enabled, the 6800XT drops to 36% slower than the NVIDIA 3080, and the 6800 drops to 19% slower than the 3070. That is a significant performance decrease. What's worse is that looking at the scenes as the tests were running revealed that the ray-tracing effects were not being rendered properly.

Even though Ray Tracing in enabled in build 4.25.4, reflections and GI were not working on the AMD Radeon cards.

Researching this revealed that to get the ray tracing effects working on AMD’s video cards requires using a beta version of Unreal 2.6. This version is still a work in progress and has numerous stability, and other issues. Not something many people in a production environment would want to take on.

Unfortunately this version, while the ray tracing reflections and Global Illumination do indeed work, the performance of AMD’s cards took yet another hit in performance. The 6800XT dropped to 49% slower than the 3080, or on par with the older NVIDIA 2080 Super. Similarly the 6800 dropped to 38% slower than the 3070, almost as slow as a 2060 Super. 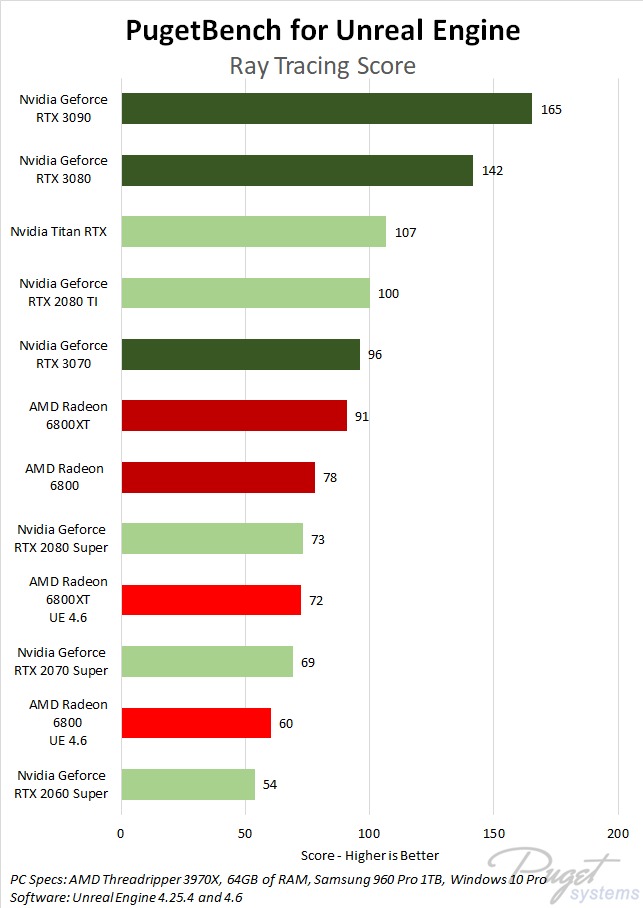 Other issues in this build have appeared as well, many materials do not display correctly, some lights didn’t show up, and I experienced several crashes. All this led me to not run the full suite at this point. It doesn’t seem like a fair comparison for AMD. It's worth noting that in this build, rasterized performance actually increased by about 15%. However, I did not check to see if NVIDIA cards also saw any differences. Once 4.26 becomes a final release, I’ll run the final numbers for all cards.

In build 4.26 many materials were not displaying and some lights were not rendering properly.

So where does that leave us? For the time being, we can’t recommend the Radeon 6800 for most of our customers. The big draw to Unreal Engine for people outside of game development is the real-time ray tracing. Unreal hasn’t been fully updated to take advantage of these cards yet, and even with what they do have, AMD shows a significant lack of performance compared to the equivalent NVIDIA cards. I’m hoping that the final release of 4.26 will show better performance numbers for these Radeon cards.

Keep in mind the generational improvement for AMD’s last round of video cards. While this generation is not quite up to the task of professional workloads, it is a huge step up from their last offering. If AMD is able to make the kinds of improvements to their video cards that they have with their CPUs, we should see some strong competition in the near future.