Skip to content
Always look at the date when you read an article. Some of the content in this article is most likely out of date, as it was written on October 7, 2014. For newer information, see our more recent articles.

Here at Puget Systems, we sell a lot of hard drives, with a good chunk being WD (Western Digital) Green drives. Especially in our Serenity systems, the quiet operation of the Green drives is essential when a customer wants a lot of storage space without the added noise that usually accompanies hard drives. However, we have recently decided to retire the WD Green drives from many of our systems, moving instead to the NAS and RAID oriented Red drives that are also made by WD. In working with the drives and examining the specifications closely, we have found that there is actually very little downside to Red drives compared to Green drives, but a number of advantages.

For our customers that want quiet systems, moving away from the tried and true Green drives may seem like an odd decision, so in this article we are going to compare the Green and Red lines and show why we believe that this is a good move. One thing we want to note is that all of this information is only valid for the latest revision of these drives. If you go back even one or two revisions, the differences between the two lines are completely different.

Because there are so many specifications and features to go over, we will be dividing this article into separate sections based on the categories that WD uses in their spec sheets. These categories include basic specifications, features, performance, reliability/data integrity, power management, environmental specifications (including noise levels), and physical dimensions. If you rather just see a summary of why we are making this move, feel free to jump ahead to the Conclusion section. Likewise, if you would rather just see all the specifications at a glance without any of our commentary, simply expand the option below:

From a very basic standpoint, the two model lines are essentially the same. They are both 3.5-inch SATA 6GB/s drives that include 1, 2, 3, 4 and 6 TB versions. The main difference we want to point out here is the price. If you were to purchase a drive as a stand alone part from Newegg, a Red drive would be cost about $5 more per terabyte than a Green drive. This isn't much, but depending on the model you may have to spend up to $20 more for a Red drive than a Green drive.

From a features standpoint, the only major difference between Green and Red drives is TLER support. Neither drive supports SED, and 3D Active Balance Plus is really just WD's way of saying that the motor and platters are all balanced within a certain tolerance to ensure that vibration is kept to a minimum. In fact, it would probably be more accurate to classify 3D Active Balance Plus as a form of vibration dampening instead of vibration protection.

TLER (Time Limited Error Recovery) is a very important feature if you will be using the drive(s) in RAID since it limits the amount of time a hard drive can spend trying to recover from an error. Normally, if a data error is detected the hard drive will attempt to recover the data and repair the error. Depending on the nature and severity of the error, this can take anywhere from a few milliseconds to a couple of minutes. Normally, this isn't a big deal – it just results in the data not being available for a bit longer than normal. However, RAID controllers only allow for a short amount of recovery time (usually about 7-14 seconds) before the controller assumes that the drive is having problems, drops the drive from the array, and marks the array as degraded.

What TLER does is limit the amount of time the hard drive can spend trying to repair an error before giving up. Since many types of RAID have built-in error correcting, it is preferable to let the RAID itself repair the error than to let the hard drive drop and degrade the RAID array. While TLER is absolutely great if the drive is used in a RAID array, it is not useful (and could even be a negative) if the drive is simply a stand-alone drive. Luckily, WD has provided us with proprietary tools that allow us disable TLER on systems that do not have RAID arrays.

In addition to the greater load/unload cycles, Red drives also carry a 3 year warranty from WD compared to the shorter 2 year warranty found on Green drives.

Comparing the power management specifications between these two drive lines is actually fairly interesting. Green drives are specifically designed for lower power operation, yet the Red drives either have the same or lower power draw depending on the model. In fact, really the only place where Green drives are more "green" is due to a firmware tweak which makes the drive head park after only 8 seconds instead of the normal 300 seconds found on most other WD drives (including Reds).

When a hard drive is under normal operation, the data heads (which both read and write data to/from the platters) float just a few nanometers above the platter. The heads are so close to the platter – which is spinning at thousands of RPM – that they introduce a certain amount of drag which the motor has to work harder to overcome. Head parking is simply the act of moving the heads away from the platters so that they no longer cause any drag. While this does result in the motor drawing a little less power, there are a few downsides to head parking.

The first issue with head parking is that the "landing zone" (where the heads rest while parked) is something that can physically wear out over time. The landing zone is usually rated for hundreds of thousands of uses, but every time the heads park you are one tiny step closer to the drive failing. In addition, it takes a tiny amount of time for the heads to return to a working position after they have been parked so there is a tiny (virtually imperceptible) drop in performance while the heads are unparked for use.

To determine the power savings of head parking, we used a multimeter to measure the wattage of both a 6TB Green and 6TB Red drive at load, normal idle and idle after the head was parked: 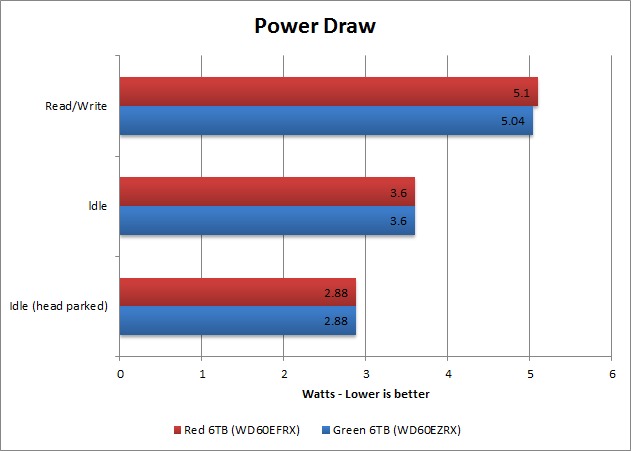 From our measurements, having the head parked resulted in a power draw reduction of about .7 watts. This is really a tiny difference, but if you are incredibly power conscious it may be relevant. Just keep in mind that the shorter the hard parking delay, the more wear the drive will sustain which may result in a shorter drive lifecycle.

One thing we want to point out is that WD does have a utility called WDIDLE3 that can change the parking delay on Green and Red drives. It is only available for download through one of their legacy drives (so no guarantee that it will work for all models) but we have successfully used it to change the parking delay on a number of Green and Red drives. So if you have a Green drive but want to make the delay longer (or want to shorten the delay on a Red drive) you currently are able to do so.

While Red drives are rated to operate at slightly higher temperatures, the interesting specification here is the seek acoustics. Even though we have used Green drives in our quietest systems for years, it turns out that the latest models of Red drives are rated to be just as quiet or quieter than their Green counterparts. From our understanding, there is no reason that Red drives should be any quieter, so there is the possibility that this is simply a testing artifact due to the extremely quiet nature of these drives. When you are testing components at 25 dBA, even something as small as a truck driving past on a road a couple blocks away can raise the decibel readings a couple of points.

Either way, Red drives are at least as quiet or quieter than Green drives which is great to know.

Finally, for an anti-climatic end, the Green and Red drives are the same physical size and weight for each storage capacity.

Overall, the differences between WD Green and Red drives are very subtle. From a noise, power draw, and performance standpoint Green and Red drives are pretty much identical. Really the only major specification difference between the two drive lines is that Red drives support TLER (critical for RAID arrays), have a longer expected lifespan, and an extra year of warranty. Red drives also have a longer head parking delay than Green drives, which can either be a pro or a con depending on if you want to reduce power draw as much as possible or maximize performance and lifespan.

The only real downside to purchasing a Red drive instead of a Green drive is the price. The difference is only about $5 per terabyte, however, which in our opinion is well worth the longer lifespan and additional year of warranty alone. 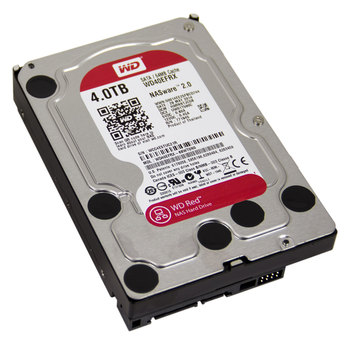 In the coming weeks, look for more and more of our certified systems to move from Green drives to Red drives. This is a pretty big move, and we would absolutely love to hear what you think about it. Let us know in the comments below!