Picking the processor, or CPU, is one of the most important decisions when building or buying a workstation - but there are dozens of options to pick from at any given point, with varying specifications and price points, so making the right choice isn't always clear-cut. Is Intel or AMD the way to go? How many cores do you need? Will a more expensive CPU be worth the cost? It can be overwhelming to keep up with all the possibilities, even for those who like to read up on the latest technology, and many review websites focus on game performance and artificial benchmarks rather than real-world applications. That is why we prefer to directly test the applications our customers use, and also offer free consulting to help potential customers know what the best system will be for their unique workflow.

Having recently tested the latest Intel Core X-10000 series and AMD Threadripper 3rd Gen processors, along with all the other major CPU launches from the past year, we can now look back and say what the best processors from 2019 are for a variety of applications. In the case of rendering, we published some articles looking at how these new CPUs perform in Cinema 4D and V-Ray Next. In this final round-up for the year, though, we want to provide a more general overview - including a brief discussion of GPU based rendering - along with some solid recommendations for what processors are the best for this type of workload going into the new year. 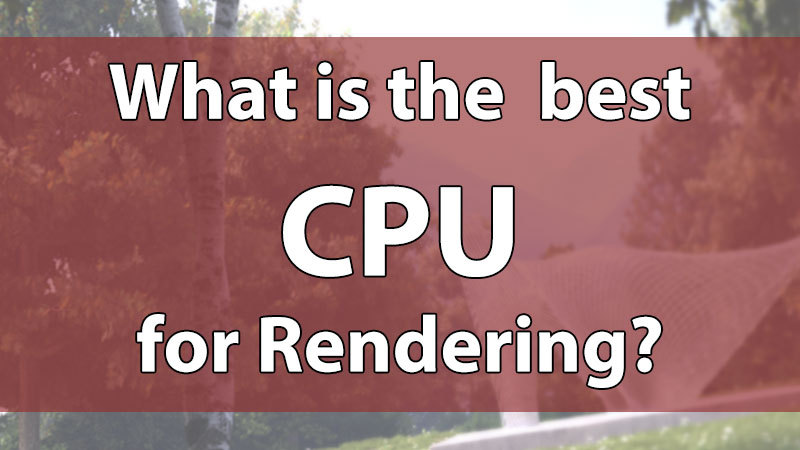 Since the goal is to make this article as widely usable as possible, I want to start with a brief description of what the CPU does - specifically in rendering applications. In a nutshell, the CPU (or processor) is the 'brain' of a computer, and it is where the bulk of the calculations happen that trace rays of light as they bounce around a scene. Millions of such rays have to be calculated to get a proper picture out of a rendering engine, and in the case of videos / films a lot of individual frames need to be rendered over the course of the whole project. However, the calculation of each ray's interaction with objects and light sources can be handled separately - making this one of the best workflows for multi-core processors.

That same lack of interdependence between each ray's calculations means this type of work can also be handled very well on GPUs, or graphics processing units. Those are the primary processors on video cards that excel at handling a lot of small calculations at the same time. That has lead to the rise of GPU-based rendering over the last decade or so, and many of the popular rendering engines used today are part of that breed (including OTOY's Octane Render, Maxon's Redshift, and more). In those cases, the CPU itself suddenly matters a lot less: it is primarily just feeding data to the video cards, making clock speed far more important than core count. The number of PCI-Express lanes, and in turn video cards, that a system supports also depends on the CPU. We won't be looking at those sorts of details in this post, as we are focusing on CPU-based rendering, but if that is what you use then check out our other articles on the topic.

Getting back to our focus for today, there are several aspects of a CPU that impact how fast it is, but it can be simplified into two primary attributes: core count and frequency (clock speed). To break this down into simpler terms, we have a brief video that explains those concepts using a car analogy.

With that in mind, let's proceed to an overview of modern processor performance in a couple popular CPU rendering engines. 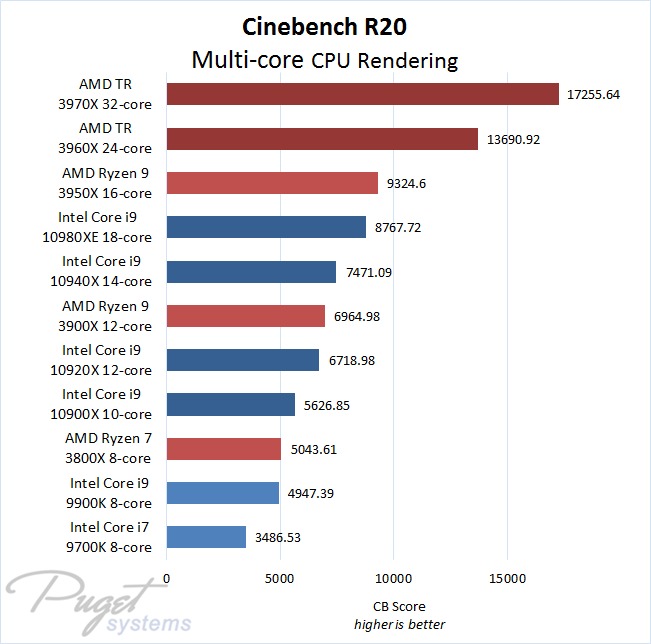 Cinema 4D's built-in rendering engine is very good at utilizing a lot of processor cores, and in terms of per-core performance sees good results on both Intel and AMD chips. However, AMD has the high core count market cornered for workstations right now, with their 24- and 32-core CPUs far outpacing what Intel has to offer in this space.

We have two charts for V-Ray Next, because this rendering engine offers two different modes of operation. The first is a traditional CPU-based rendering pipeline, aptly named V-Ray Next CPU, while the second is called V-Ray Next GPU and primarily uses the video card(s) in a system to performance ray tracing. However, Chaos Group built emulation into that mode to allow the CPU to contribute to performance as well, so having a strong processor will provide added benefits on top of the video cards when running the GPU version.

In both cases, AMD's Threadripper chips take the top performance spots among the processors we tested. Interestingly, among the other models, the CPU-only mode seems to slightly favor Intel's Core X chips - while the GPU mode favors AMD Ryzen.

What processor should you use for a CPU rendering workstation?

As shown in the graphs above, CPU-based rendering engines excel on processors that have a lot of cores while also maintaining good clock speeds. Right now, for single-processor workstations, that means AMD's Threadripper chips are king. If you have room in your budget, you won't regret getting a 3960X or 3970X - and since they also have good per-core performance, they will excel in modeling and 3D animation applications too. Not everyone can afford a Threadripper, though, so here is our list of recommendations at varying prices:

Both Intel and AMD indeed offer higher core counts - as well as multiple physical CPUs - in their server processor lines... but those get a lot more expensive, and would be better suited to a render farm than a workstation, especially since they sacrifice per-core speeds which other applications benefit from (like Cinema 4D, Maya, 3ds Max, and others). We do offer systems that can be equipped with dual Xeons and the like, so if that is something you are interested in just reach out to us and we can advise you as to whether or not they would be a good fit for your situation and budget.

Hopefully, this post has helped you choose the right CPU for your rendering workstation. Keep in mind that even with these recommendations, the right CPU for you may be different depending on the combination of programs you use and exactly what you do in those applications. If at all possible, we recommend speaking with one of our technology consultants (425.458.0273 or sales@pugetsystems.com) if you are interested in purchasing a Puget Systems workstation, as they can help you get the exact right system for both the work you do today and what you hope to do in the future.