Skip to content
Always look at the date when you read an article. Some of the content in this article is most likely out of date, as it was written on September 18, 2018. For newer information, see our more recent articles.

If we were able to teleport back in time to early 2015, AMD's new Threadripper 2990WX 32 Core processor would likely be absolutely incredible for After Effects users. At that time, After Effects was extremely good at utilizing a high number of cores – but things changed when Adobe started adding support for GPU acceleration. Being able to utilize the GPU typically results in much higher overall performance for most AE users, but unfortunately (or fortunate if you consider your wallet) it meant that AE was no longer able to make effective use of a high number of CPU cores. The end result is that a much more affordable CPU like the Intel Core i7 8700K should give you better performance than a CPU like the AMD Threadripper 2990WX or 2950X.

However, there is an exception to this rule. In recent versions of After Effects, Adobe has been adding integration with Cinema4D, allowing users to leverage the C4D rendering engine in their projects. In our Threadripper 2990WX Cinema 4D testing using CineBench article, the 2990WX was up to 54% faster than the Intel Core i9 7980XE which means that for some AE users, Threadripper may be terrific. On the other hand, with AE being used as a go-between, the question is whether performance in CineBench actually translates over to real After Effects projects that use the C4D rendering engine.

To find out if the new Threadripper 2 CPUs from AMD are good for After Effects, we will be comparing the 2990WX and 2950X to a number of Intel processors as well as the previous generation TR 1950X and 1920X. 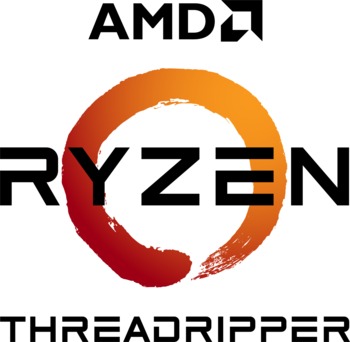 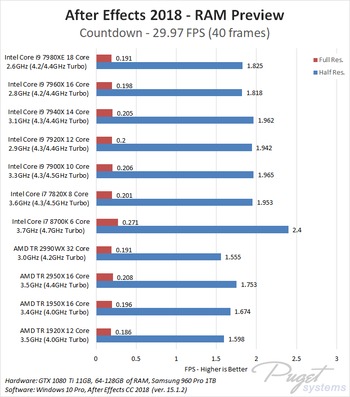 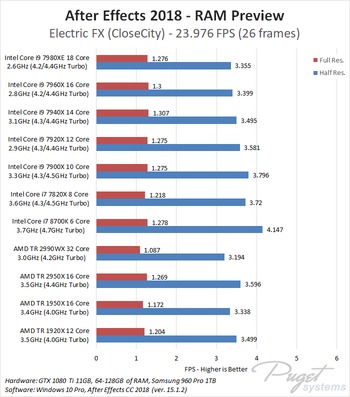 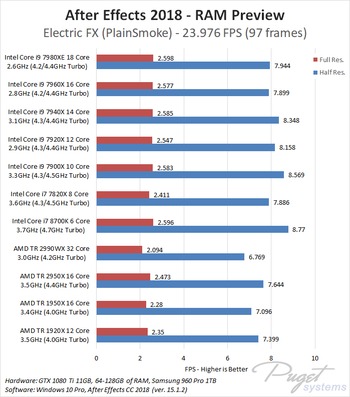 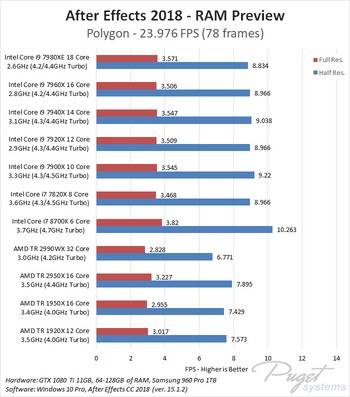 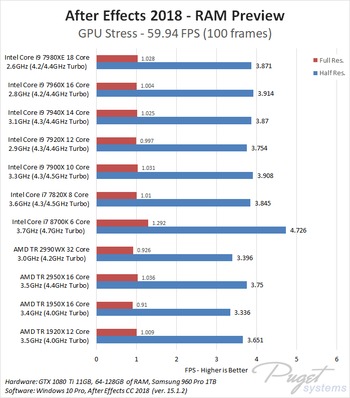 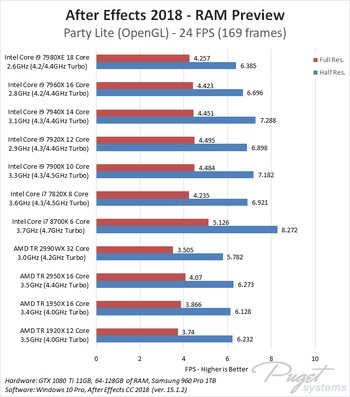 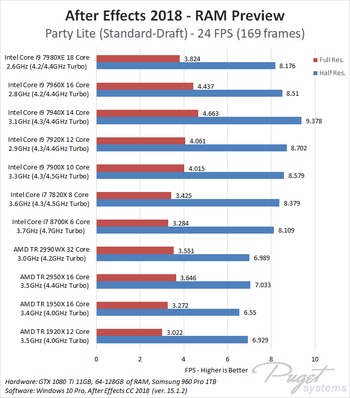 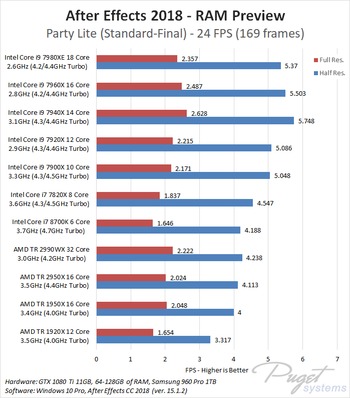 As we mentioned at the start of this article, since AE version 2015 we have seen a very sharp split in the type of CPU that works best for After Effects. While in the past a CPU with lots of cores would be great, today you will almost always be better off with a CPU that has fewer cores but a higher operating frequency. The exception to this is if you utilize the Cinema 4D CPU renderer where a high number of CPU cores can still make a decent difference in performance. Due to this, we have separated out our testing results between "standard" projects and those utilizing the Cinema 4D CPU renderer. 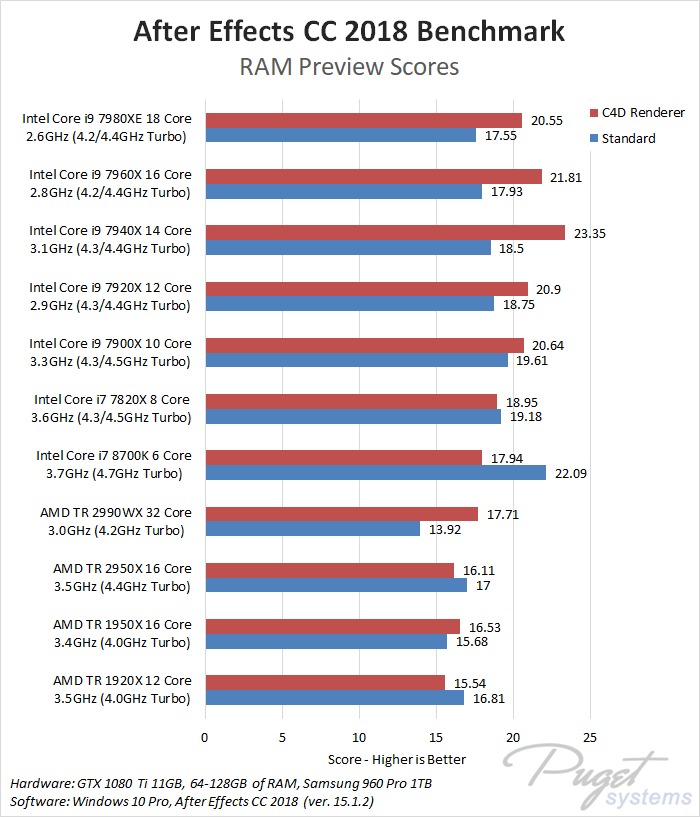 To put it bluntly, the AMD Threadripper 2990WX and 2950X did not do particularly well in this test. Even for the projects that used the Cinema4D rendering engine (which is the primary place where more cores can help), all of the Threadripper CPUs lagged behind the Intel CPUs we tested. On the standard projects the 2990WX in particular really struggled, coming in at a huge 40% slower than the Intel Core i7 8700K. 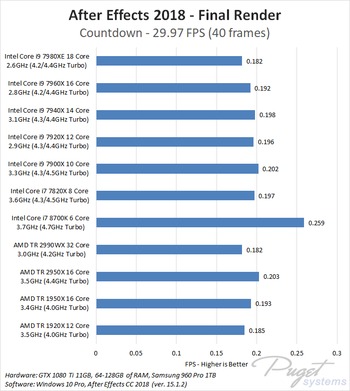 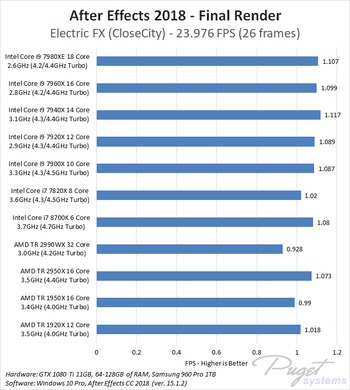 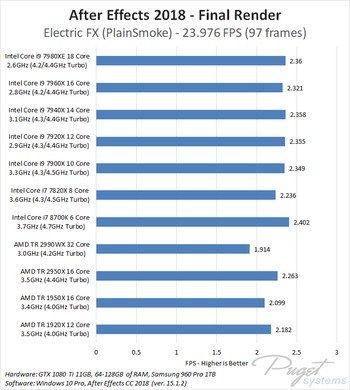 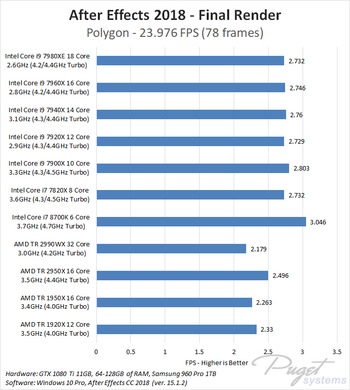 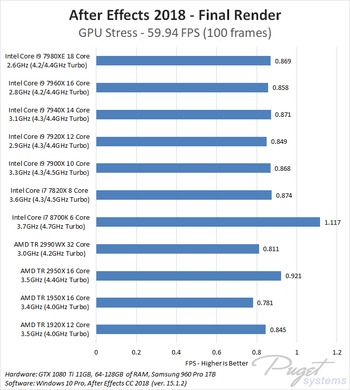 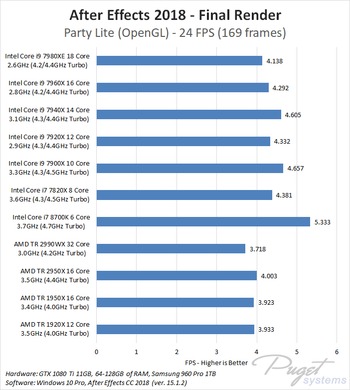 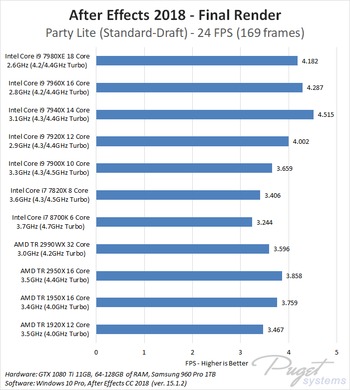 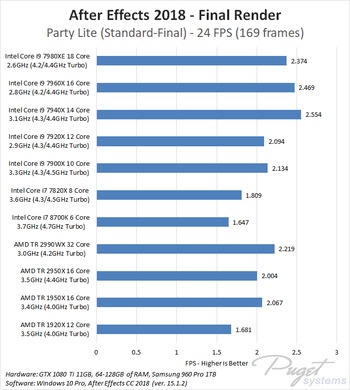 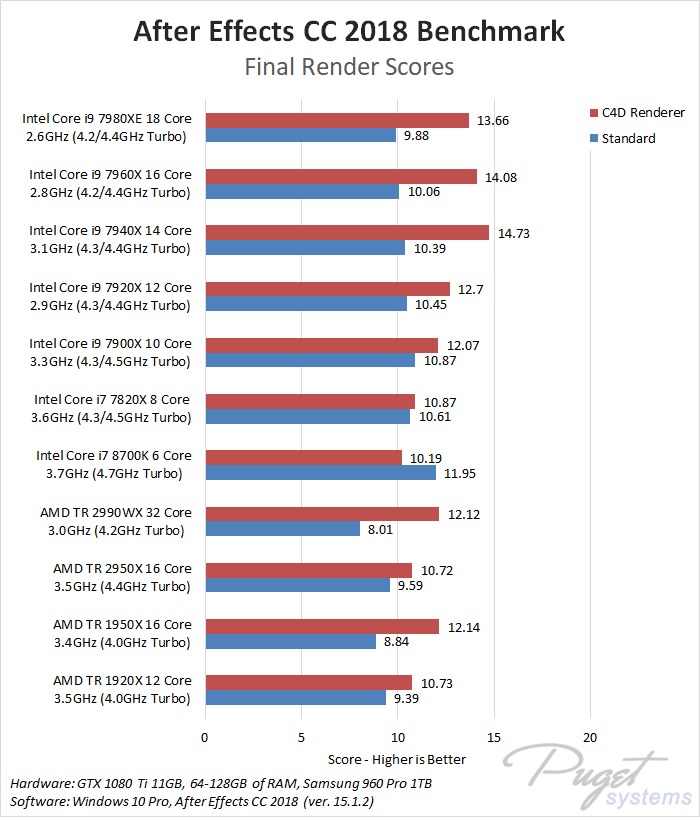 In case you missed it explained in the previous section, the score shown in the chart above is a representation of the average performance of each processor for this test. In essence, a score of "10" would mean that on average that processor was able to export or render our projects at 10% of the project's set FPS.

While the Threadripper 2990WX once again gave poor results for standard projects, it was OK for projects using the C4D renderer. Not good enough to keep pace with a more affordable CPU like the Intel Core i9 7940X, but it was at least only 20% slower than that CPU. Similarly, the 2950X did better here than in the RAM Preview testing, but still not enough to make it close to a comparably priced Intel CPU.

Is Threadripper 2 Good for After Effects?

After Effects favors CPUs with higher per-clock performance which is unfortunately a weakness of AMD's Threadripper CPUs. For most users, a Threadripper 2990WX and 2950X CPU should be about 30-40% slower than a much more affordable Core i7 8700K. They did better when utilizing the C4D rendering engine, but even there they were not able to match a similarly priced Intel X-series processor. 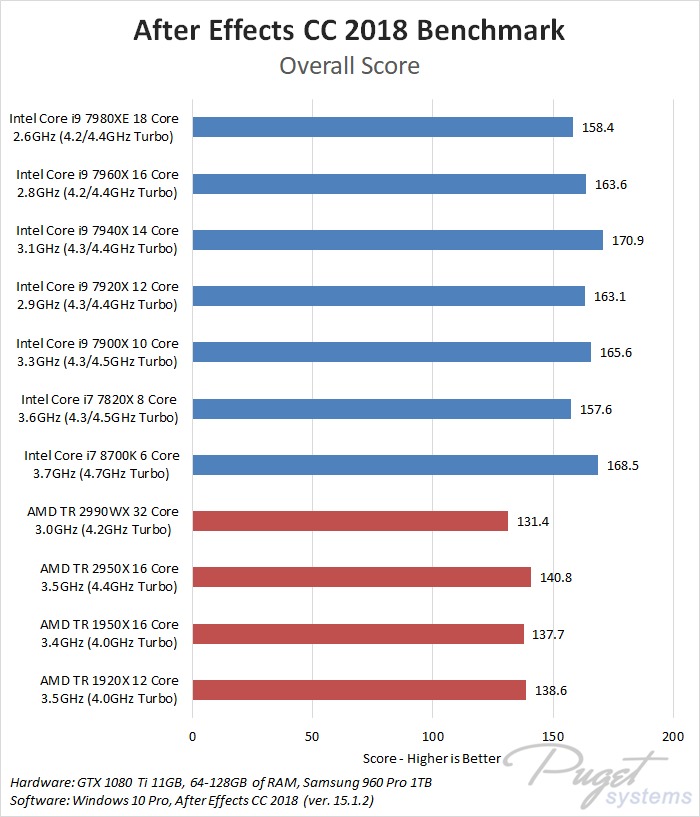 For most users, nothing is going to be able to keep up with the Intel Core i7 8700K – at least until the next generation of CPUs from Intel launch. However, since this article is covering the new Threadripper 2 CPUs in particular, there are really two primary comparisons we should be looking at based on the rough price of each CPU:

Compared to the 2950X, the i9 7900X overall scored just under 20% higher in our After Effects CC benchmark. Standard projects were about 15% faster with the i9 7900X while projects utilizing the C4D rendering engine ranged from 15% to 30% faster than the 2950X.

To be fair, we expected the 2990WX in particular to be underwhelming for After Effects. So much of AE is single or lightly threaded that having 32 cores is almost always going to be a negative rather than a positive. However, we expected this CPU to at least be able to hold its own in projects utilizing the Cinema4D rendering engine. In fact, in our CineBench testing, the Threadripper 2990WX absolutely dominated every other CPU. What this tells us is that it is extremely important to make sure you have a CPU that is good for After Effects in general even if you are using a rendering engine that is extremely well threaded.

No matter how to look at it, it is very clear that neither the AMD Threadripper 2990WX or 2950X are a particularly good choice for After Effects. In nearly every case, an Intel CPU should give much higher performance for your dollar. Of course, After Effects is just one program and your choice of CPU should reflect your entire workflow. If you want to see how the 2990WX and 2950X fares in other applications, we recommend checking out some of our other recent Threadripper articles.