Skip to content
Always look at the date when you read an article. Some of the content in this article is most likely out of date, as it was written on June 18, 2018. For newer information, see our more recent articles.

Like many professional software developers, Agisoft has released versions of PhotoScan for both Windows and macOS. That means we can directly compare the performance of PCs and Macs, to see both how fast these different types of computers are and how much value (performance per dollar) they provide. Let's see how the 12-core Mac Pro (still being sold by Apple, despite its age) and 14-core iMac Pro stack up to several PCs.

We've tested numerous PC configurations – both different CPUs and videos card combinations – in recent weeks. To make an interesting and logical comparison to the Apple workstations, and to avoid information overload, we are going to stick with just a few hardware configurations which should be similar in price to the Mac systems.

Because the GPU has a big impact on processing times in some workflow steps, but Apple's systems are limited on video card selection, we will be including only a single GeForce GTX 1080 Ti in the PCs used for this article. Adding a second (and even third) video card can improve performance in certain steps within PhotoScan, which we explored in another article.

As with the other recent articles we have published, all tests were conducted with "High" quality settings. We used relatively small photo sets to avoid the amount of memory that each platform supports limiting performance. Please note that RAM capacity is absolutely something to consider if you work with large image sets, though, so check out this PDF from Agisoft to see how much you'll need. 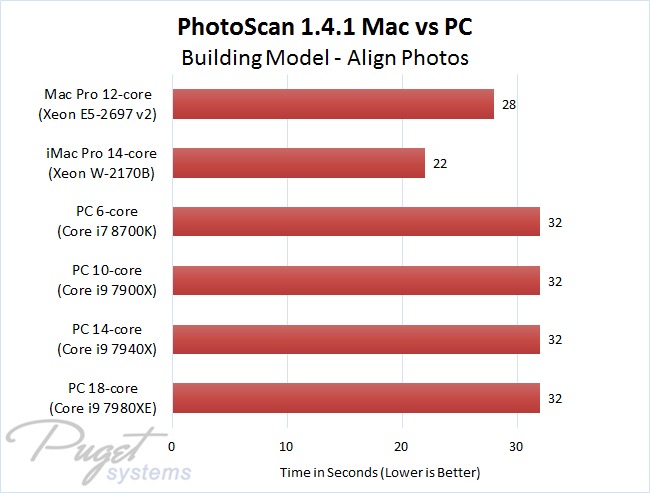 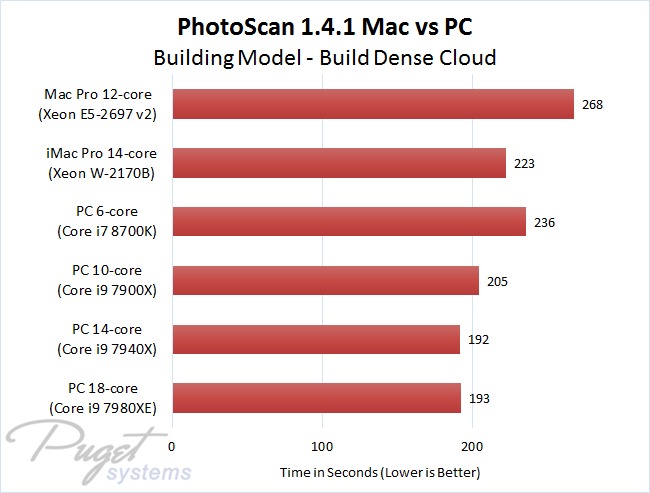 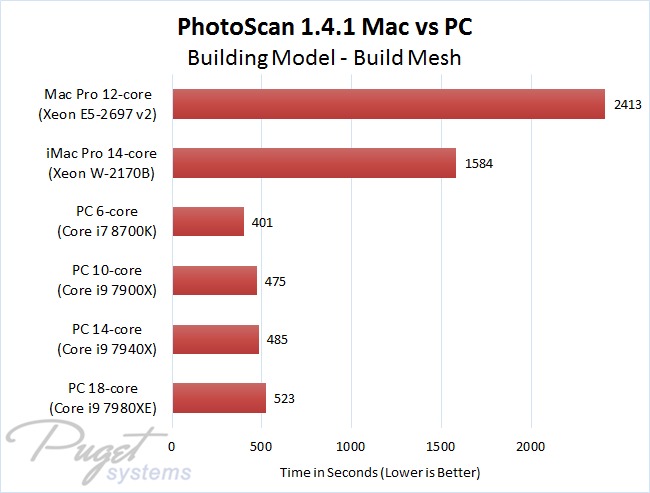 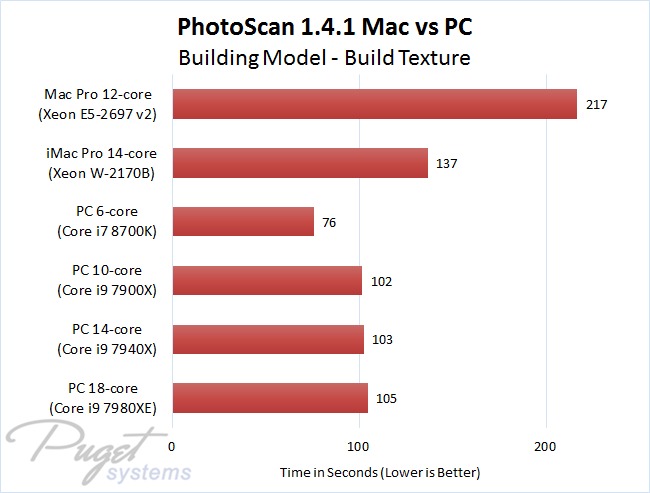 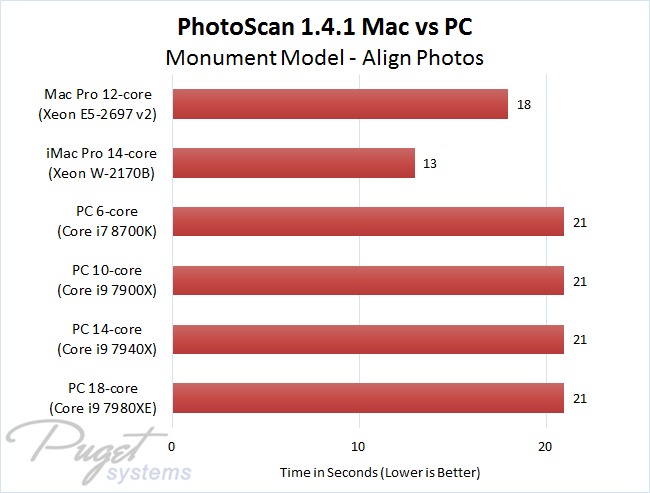 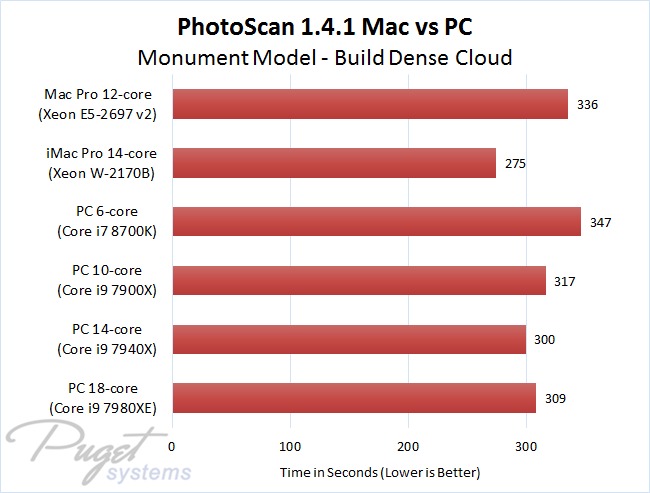 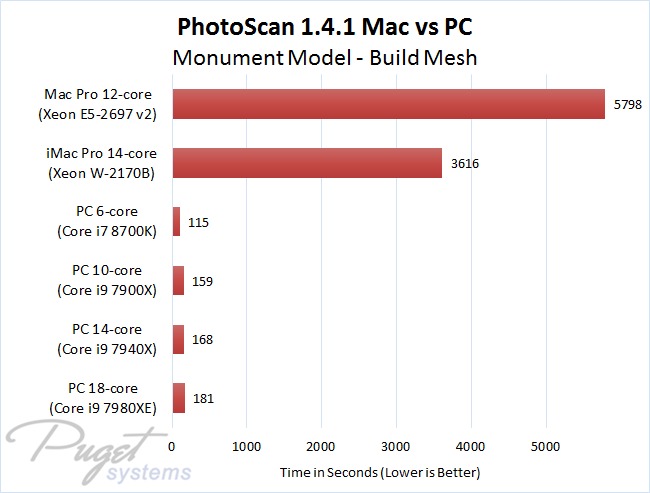 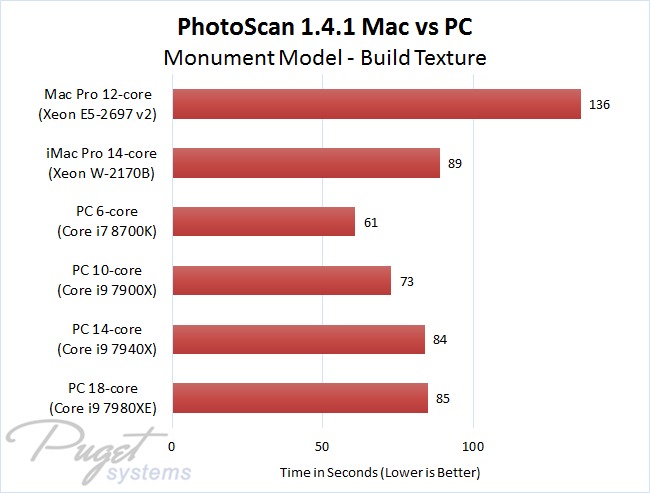 The Mac and PC systems are in the same ballpark for processing speeds in aligning photos, building a dense point cloud, and building textures. The Macs are actually a bit faster in Align Photos, though it is the shortest of the four workflow steps. Conversely, the PCs come out ahead in the Build Dense Cloud and Build Texture steps. The newer iMac Pro is faster than the old Mac Pro across the board, even though the cylindrical desktop has dual video cards (which should help in aligning photos and building the dense point cloud).

When it comes to the Build Mesh step, though, something is wrong. I've re-run tests several times now, to make sure the results above are accurate, and even made sure that the models are coming out with similar sizes (points, faces, and vertices). See for yourself: 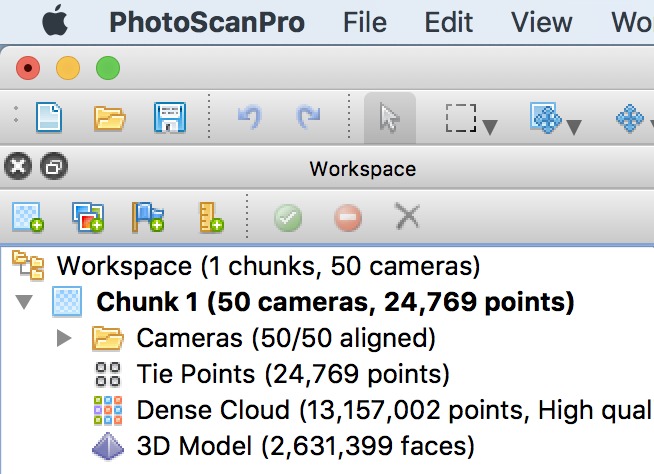 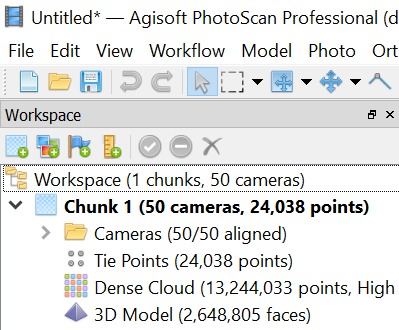 Even though the sizes are quite close – with 1% of each other on point, face, and vertex count – and the quality settings used on both the PC and Mac were the same, something caused the Mac systems to take several times longer to build a mesh than the similar-spec PCs.

I had planned to have a huge analysis of price to performance ratios, how much of an impact the option to have multiple GPUs on the PC side can help, and whatnot… but given the data above, that is all a moot point. I've been going over these results for weeks now, trying to make sure they are valid and figure out how best to present it – and I've decided to just lay it out there. Something is vastly different about the way PhotoScan builds meshes on Mac systems, so much so that they are three or more times slower on that step than a similar spec PC. Since that is one of the major steps in photogrammetry, there is no way around it: Macs are NOT a good platform for PhotoScan at this time. Stick with a PC: use a fast CPU and get one, two, or three GPUs (depending on your budget).