Skip to content
Always look at the date when you read an article. Some of the content in this article is most likely out of date, as it was written on June 11, 2018. For newer information, see our more recent articles.

How well does performance scale across multiple GPUs, though? Are there diminishing returns as more cards are added? And is scaling affected by GPU generation? We are putting the latest Titan V cards, based on NVIDIA's new Volta architecture, to the test – along with the previous generation GeForce GTX 1080 Ti cards. Those have been extremely popular for rendering workstations because of their price:performance ratio, although they aren't as powerful as the Titans.

To see how increasing the number of video cards in a system affects performance in OctaneRender 3.08, we took the OctaneBench program and modified it slightly. As of this publication, OctaneBench is still using the 3.06.2 version of the rendering engine – which does not support the Titan V. However, you can manually copy over the files from 3.08 into the folder containing OctaneBench and then it will use the newer rendering engine. We cannot redistribute the modified software, but if you download both OctaneBench 3.06.2 and the demo version of OctaneRender 3.08 it is pretty easy to copy over the necessary files.

On the hardware side, we want to use a high clock speed processor so that the video cards can really shine. We also need a platform that will support as many video cards as possible in a large tower workstation. Given that combination of goals, the configuration which makes the most sense is Intel's Xeon W – specifically, the W-2125 processor on a Gigabyte MW51-HP0 motherboard. That provides the right PCI-Express slot layout for up to four GPUs, and the Xeon W-2125 runs at 4GHz base clock and up to 4.5GHz in Turbo Boost.

Here are the total scores from OctaneBench for the different numbers of video cards we tested: 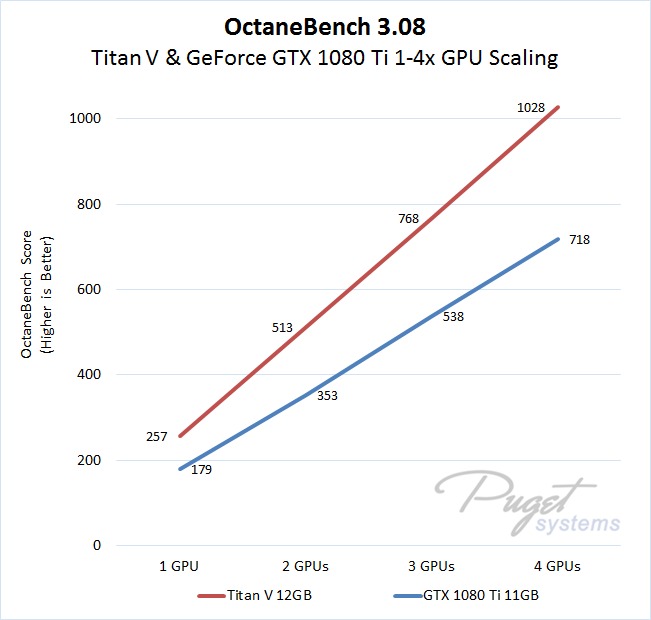 Or another way to look at it, here is how the Titan V's scores increased as a percentage, based on the score of a single card: 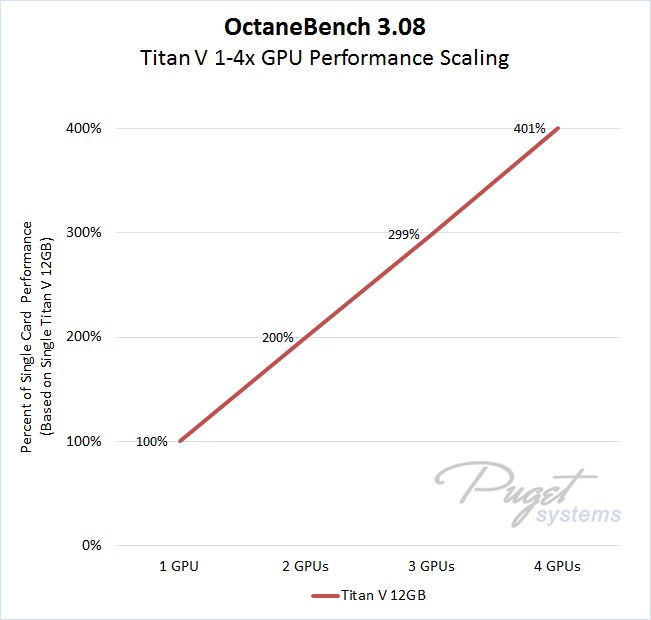 And the same sort of chart for the GeForce GTX 1080 Ti's scaling percentage, based on a single card's score: 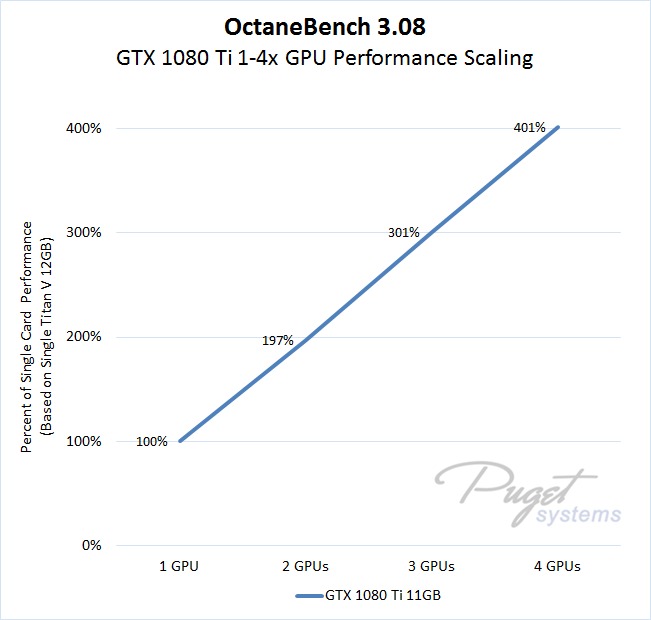 As shown above, video card performance in OctaneRender scales almost perfectly as additional cards are added. That is called "linear scaling" and is fairly rare in real-world computer applications. Given that both the Titan V and GeForce GTX 1080 Ti showed the same degree of scaling, it is probably safe to assume that this would apply across the board to all NVIDIA graphics cards in Octane.

Performance in OctaneRender scales almost perfectly across multiple GPUs – but that statement can lead to incorrect conclusions. Doubling the number of video cards in a system doubles performance, but does *not* double the price of the computer. Much of a workstation may stay the same, even as more video cards are added, so the percentage increase in price for an additional card is usually less than the percentage increase in OctaneRender performance you will end up getting. Moreover, a few lower-cost cards can often outpace a single higher-end GPU – meaning that multiple video cards is the way to go for the best value in OctaneRender.