Skip to content
Always look at the date when you read an article. Some of the content in this article is most likely out of date, as it was written on June 9, 2018. For newer information, see our more recent articles.

However, not all video cards work universally with all GPU-based rendering engines. In the case of OctaneRender, only NVIDIA graphics cards work because CUDA is the language the software uses. Moreover, when a new generation of GPUs come out it takes some work by OTOY before they will function properly. With the recent release of OctaneRender 3.08, support was added for NVIDIA's Volta architecture… meaning you can now use the Titan V, the fastest consumer-grade video card yet made (though arguably, the Titan series straddles the line between consumer- and professional-grade). So now that the Titan V can run Octane, how well does it perform? Let's find out!

To see how the different video cards perform in OctaneRender 3.08, we took the OctaneBench program and modified it slightly. As of this publication, OctaneBench is still using the 3.06.2 version of the rendering engine – which does not support the Titan V. However, you can manually copy over the files from 3.08 into the folder containing OctaneBench and then it will use the newer rendering engine. We cannot redistribute the modified software, but if you download both OctaneBench 3.06.2 and the demo version of OctaneRender 3.08 it is pretty easy to copy over the necessary files.

On the hardware side, we used a high clock speed processor so that the video cards could really shine. Since we are also going to be putting out an article looking at Titan V scaling, the platform which made the most sense was Intel's Xeon W – specifically, the W-2125 processor on a Gigabyte MW51-HP0 motherboard. That provides support for up to four GPUs, which we will be testing separately.

Here are the total scores from OctaneBench for the different video cards we tested: 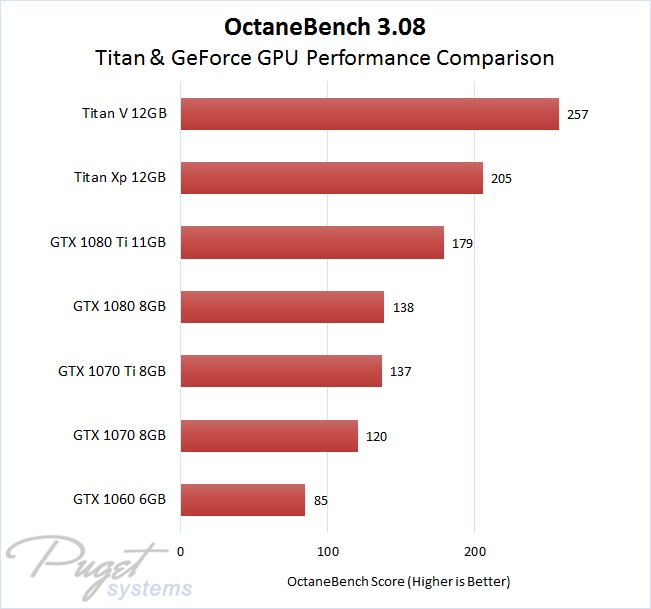 Or another way to look at it, here is how all of these cards compare to the popular GTX 1080 Ti: 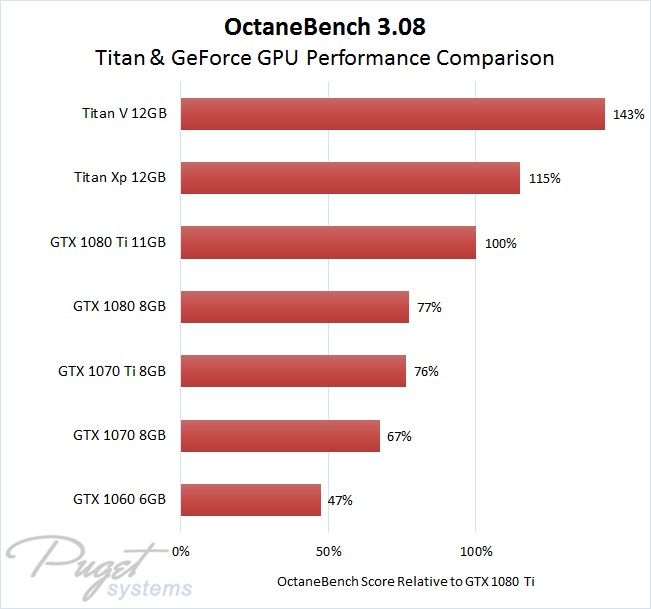 In that second view, we can easily see that the Titan V is over 40% faster than the 1080 Ti – and about 25% faster than the Titan Xp. That is a pretty good improvement from one generation to another (Pascal to Volta)… though the Titan V is also substantially more expensive than any of the other cards in this comparison. In our testing, multi-GPU scaling in OctaneRender is almost perfectly linear. That means if you aren't maxing out the number of video cards in a given system, or intentionally leaving room to do so in the future, there are combinations of other cards which can match the performance of various numbers of Titan Vs for a lower price. For example:


It is worth noting that the amount of memory on a video card will limit the size and complexity of the scene you can render, so not all of these are perfectly fair comparisons. The GTX 1080 and 1060 cards listed have substantially less onboard RAM, so if you work with large scenes you will be better off sticking with the 1080 Ti, Titan Xp, or Titan V. Additionally, larger quantities of video cards require a bigger chassis, more PCI-E slots on the motherboard, higher wattage power supply, and more overall cooling – so keep all that in mind.

So, Is the Titan V a good GPU for OctaneRender? Yes: if you want the top performance, and don't mind spending for it, the Titan V is the fastest video card you can get for Octane – at least without crossing over into the ultra-expensive Quadro or Tesla territory.

However, keep in mind that GPU rendering scales very well with multiple video cards. If you have a limited budget, a higher number of less costly cards may end up being faster. When you want to max-out both the number of video cards and performance, though, the Titan V is the current king.