Skip to content
Always look at the date when you read an article. Some of the content in this article is most likely out of date, as it was written on July 7, 2003. For newer information, see our more recent articles.

If money was not a factor, how would you design the Ultimate Gaming Computer? At Puget Custom Computers, we are asked that question quite often, so here we come with an article devoted to that subject! What makes a gaming computer great, and what should you think about when you design your own? In this article, we will answer those questions, and get you on your way to gaming paradise! 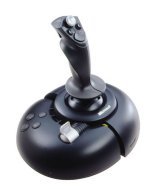 Overall, you need to know what components of your computer are most heavily used during gaming. The order is simple, but we’ll go into more detail. From most to least important, we have:

With the huge complexity and intensity of graphics in today’s games, it is impossible to have smooth playback without a good video card. While you can get by with a Radeon 9000 or GeForce4 MX card, these are simply cheaper alternatives to the real performers. With top notch video cards, you have a few choices, so let’s give them a look: 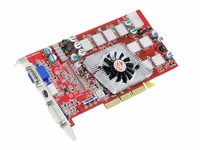 ATI’s Radeon line has been offering great gaming video cards for years. If you’re looking for performance at all costs, the Radeon 9800 with 256mb memory is the leader of the line, but be warned: it isn’t cheap! If you’d like to save a little money, you could grab a Radeon 9500 at less than half the price, and get the same features at a reduced performance rate. For many months, these ATI cards were able to boast their position as the only cards with full DirectX 9 support. While this doesn’t mean much today, it will mean much more as more games use DirectX 9 features. In the end, DirectX 9 support means better performance with the same hardware, as game designers build visual effects onto DirectX 9 functions that are hard coded right on your video card. In short, if you are a serious gamer, if you don’t have DirectX 9 support, then you should plan on needing to buy another video card in about a year! While ATI used to be the only manufacturer who could claim DirectX 9 support, we now see this same support from their main competitor – nVidia. 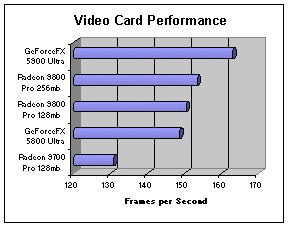 In the benchmarks to the right, you’ll see the performance of each card in Unreal Tournament, in 1600×1200 resolution at 32bit color, with 2x FSAA. The benchmarked performance of each card highly depends on the test system specifications, and these display settings, but in the end, our choice for the Ultimate Gaming PC is clear – the memory. It just doesn’t get any faster!

While graphics is always the focus of a great gaming PC, an aspect that is often not given enough attention is the sound card. Not only does a quality sound card mean better audio quality, but without the right sound card, the performance of your system is severely impacted. Thankfully, this area is quite simple to make recommendations for – if you get a Soundblaster Audigy or Audigy2 sound card, you’re in great shape. Of the two, the Audigy2 has more features and better sound quality, but you can view a full comparison chart by clicking here. In most cases, onboard sound is not a good choice, but there is one exception to this, found in the nForce2 chipsets. The nForce2 APU gives shockingly good performance and audio quality. TomsHardware.com did a review on this chipset, and found the audio performance and quality to be roughly the same as an Audigy card. Not bad for an integrated solution! On top of that, nVidia’s drivers are very clean and easy to work with. Setup is a snap, and whether you’re hooking up regular stereo speakers or a full digital 5.1 set, the sound control panel makes it very easy to configure and get running in no time! On a budget, the choice is clear – go with the nForce2. 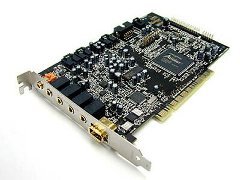 We’ll talk more about the advantages of the chipset next, but even for the sound alone the choice is worth considering. But as much as we like the nForce2, for the Ultimate Gaming PC, we’ll use the Audigy2.

A good gaming video and sound card is useless if you don’t have a good foundation to put it on. Your memory must be able to provide the bandwidth your games need to load up the next level in your game without hesitation. In the past, this choice has been tougher, with questions of RDRAM versus DDR-SDRAM. Lately, however, we see RDRAM being phased out, leaving us with a clear choice – DDR! New dual-DDR chipsets will use two DIMMs concurrently to provide even more memory bandwidth. Even though the performance advantage is smaller than you might think, it is still a good idea. The nForce2 chipset has this feature, and is basically your only choice right now if you go the AMD route. Not only does that give you the nForce2 sound system, but it gives you the dual-DDR memory benefit, and also gives you the ability to use the newest Athlon XP processors. Starting with the 3200+ processor, the Athlon XPs will run at a 200MHz FSB, and the nForce2 chipset is the only one equipped with the ability to run that fast. So, if you’re going the AMD route, the Asus A7N8X-Deluxe motherboard with a Athlon XP 3200+ processor and 1.0GB of DDR400 memory is our recommendation. 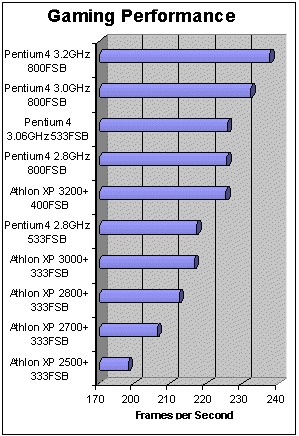 But what about the Pentium4 route? As much as us AMD buffs don’t like to admit it, Intel holds onto their long standing performance lead that they reclaimed way back with their 2.53GHz processor. Even the AMD 3200+ isn’t able to beat out the Pentium4 2.8GHz processor. Most recently released is the line of Pentium4 processors that run on a 800MHz FSB. Also new to the technology scene is the dual-DDR based Intel chipset. Our pick for the Ultimate Gaming PC? The motherboard, with a processor, and 1.0GB of DDR400 memory.

While the appearance of a gaming system is often the first thing an avid gamer thinks about, it clearly has nothing to do with the performance of the system. Luckily, it is quite cheap to get a great looking machine! Clear side windows, neon lights, round cables…you can often make all of those modifications to your system for under $50. If you wanted to go all out, you could use liquid cooling! However, one very important note to make here is that with all the cooling needed for the new video cards, it is nearly impossible to achieve the same level of cooling with liquid cooling. You can cool your CPU, hard drive and motherboard incredibly well, but the heat creation on the video cards is so widespread that it is impossible to cover with a standard waterblock. For this reason, we recommend staying with your standard air cooling for the video card, even if you have a liquid cooled computer. With our Ultimate Gaming PC, we use a Lian-Li PC6083 case, with a clear side window, blue neon light, and round cables. The end result is a clean look – it looks great but it isn’t over the top.

In the end, building the Ultimate Gaming Computer is not very difficult as long as you have benchmark data available. When money is not an issue, just buy the fastest! Aside from that, upgradability and apprearance are your only more complicated concerns. For our system, we used:

Put these components in a snazzy case, and you have yourself the best gaming PC money can buy! But who has that much to spend? If you’re looking for ways to save, then buying the “next best” hardware is the best way to save. Look out for our next article, which will cover how to build a great gaming PC on a tight budget!