Overall, the NVIDIA GeForce RTX 3090 Ti provides a small benefit over the RTX 3090 in DaVinci Resolve Studio, although the difference is at most around 6%. Considering that the RTX 3090 Ti has a MSRP is that is $500 higher than the RTX 3090, consumes 100W more power, and doesn't any additional VRAM, the RTX 3090 Ti is likely going to be a bit of a hard sell for most Resolve users.

NVIDIA has a history of releasing "Ti" variants of their products which in most cases are simply slight upgrades to the base model. Today, NVIDIA is continuing this trend with the new NVIDIA GeForce RTX 3090 Ti 24GB. Compared to the base RTX 3090, the RTX 3090 Ti has the same amount of VRAM (24GB), but has a handful more CUDA cores that run at a slightly higher frequency. In order to handle the higher core count and frequency, however, the 3090 Ti has also received a large bump in power consumption – going from 350W to a massive 450W of power draw.

Taking into account the number of cores and the boost clock, rough math points to the RTX 3090 Ti being somewhere around 10% faster than the RTX 3090 assuming perfect GPU utilization. That is a decent bump in theoretical performance, although the nearly 30% increase in power/heat – as well as the much higher price – is going to make it a tough upgrade for some users.

DaVinci Resolve is known in the industry as having excellent GPU-acceleration support – greatly benefiting from powerful (or multiple powerful) video cards. This makes it a very interesting application to look at for the RTX 3090 Ti since Resolve should benefit from the extra performance of these cards more than any other NLE currently on the market. 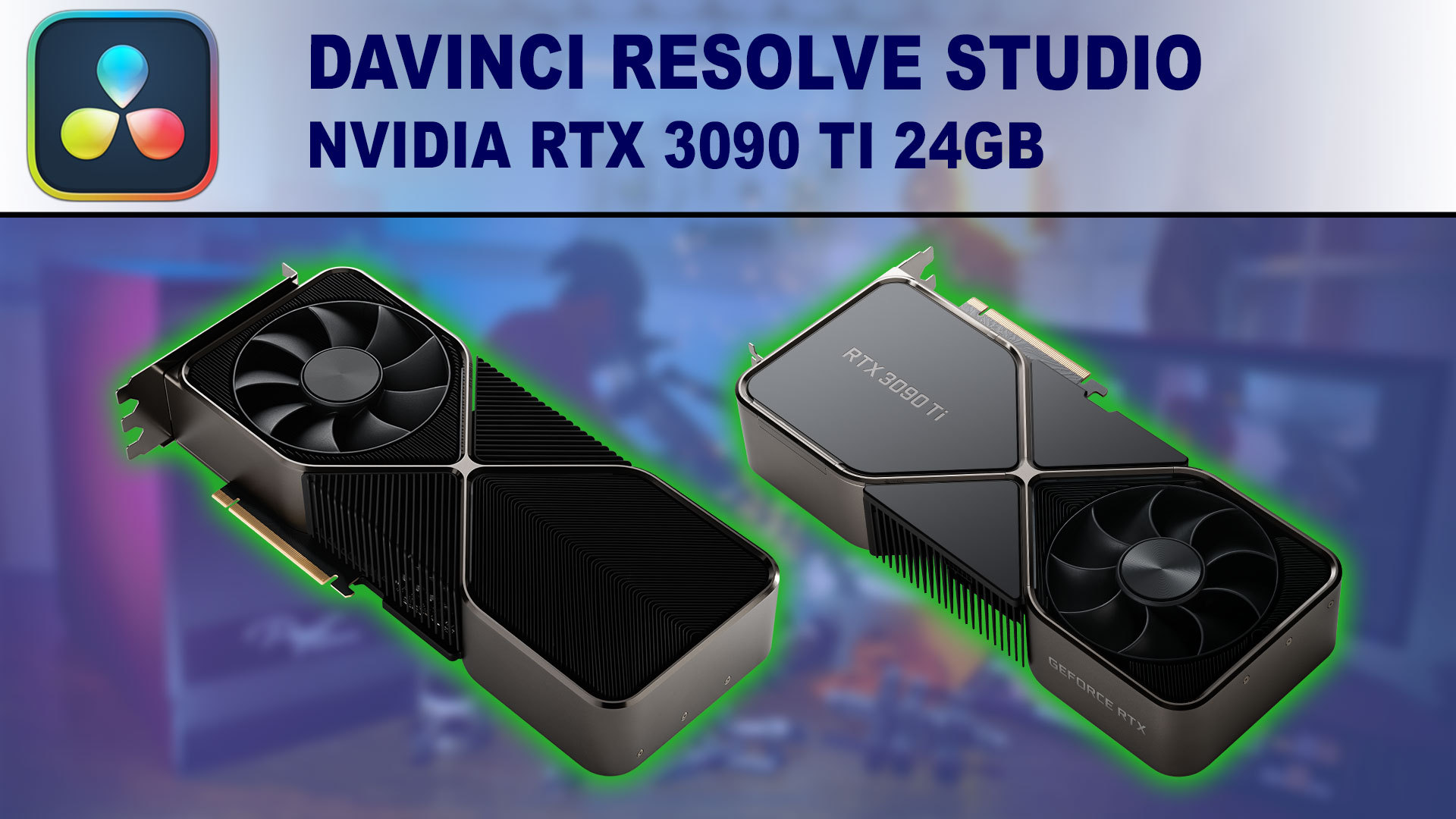 As we noted earlier, the RTX 3090 Ti is a slightly more powerful version of the RTX 3090 – only with a much larger power draw and price tag. While we are going to focus purely on performance in this article, it is definitely worth noting that the 3090 Ti is going to be both louder and hotter than any other RTX 3000 series card due to the much higher power draw. This can be a significant concern if your system does not have adequate cooling or a large enough power supply, so be sure to keep that in mind if you are considering getting an RTX 3090 Ti.

To see how the RTX 3090 Ti performs in DaVinci Resolve Studio, we will be comparing it to the full range of RTX 3000 series GPUs as well as the AMD Radeon RX 6900XT. The test system we will be using is one of the fastest platforms currently available for DaVinci Resolve and built around the AMD Threadripper Pro 3975WX.

Often, we like to include some multi-GPU testing for Resolve for high-end GPUs like the RTX 3090 Ti, but that will have to wait for a future article. Not only do we only have a single GPU available for testing at the time of this article, but due to the 450W power draw, we are going to have to do quite a bit of additional thermal and power draw testing to find out if using more than one RTX 3090 Ti in a workstation form factor is even possible.

For the testing itself, we will be using our PugetBench for DaVinci Resolve benchmark. If you wish to run our benchmark yourself, you can download the benchmark and compare your results to thousands of user-submitted results in our PugetBench database.

We will be using the "Extended" preset that includes both 4K, 8K media as well as specific GPU Effects and Fusion tests. Using 8K media with some of the GPUs we tested is actually not a good idea as we generally recommend 20GB+ of VRAM when working with 8K media in Resolve, but our benchmark does not load the Resolve UI which means that the VRAM load is much lower; allowing GPUs with just 8GB of VRAM to successfully complete the 8K tests. 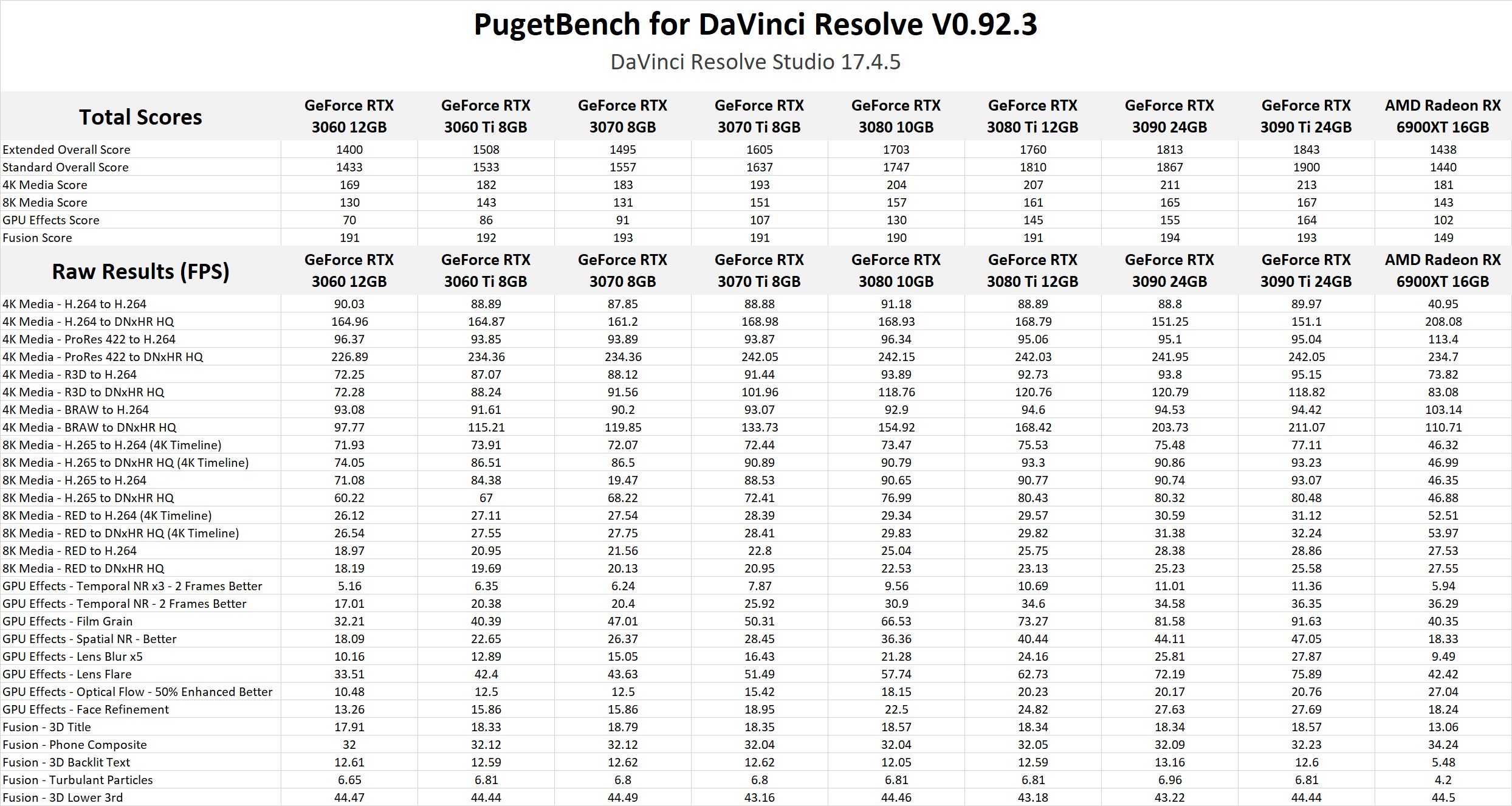 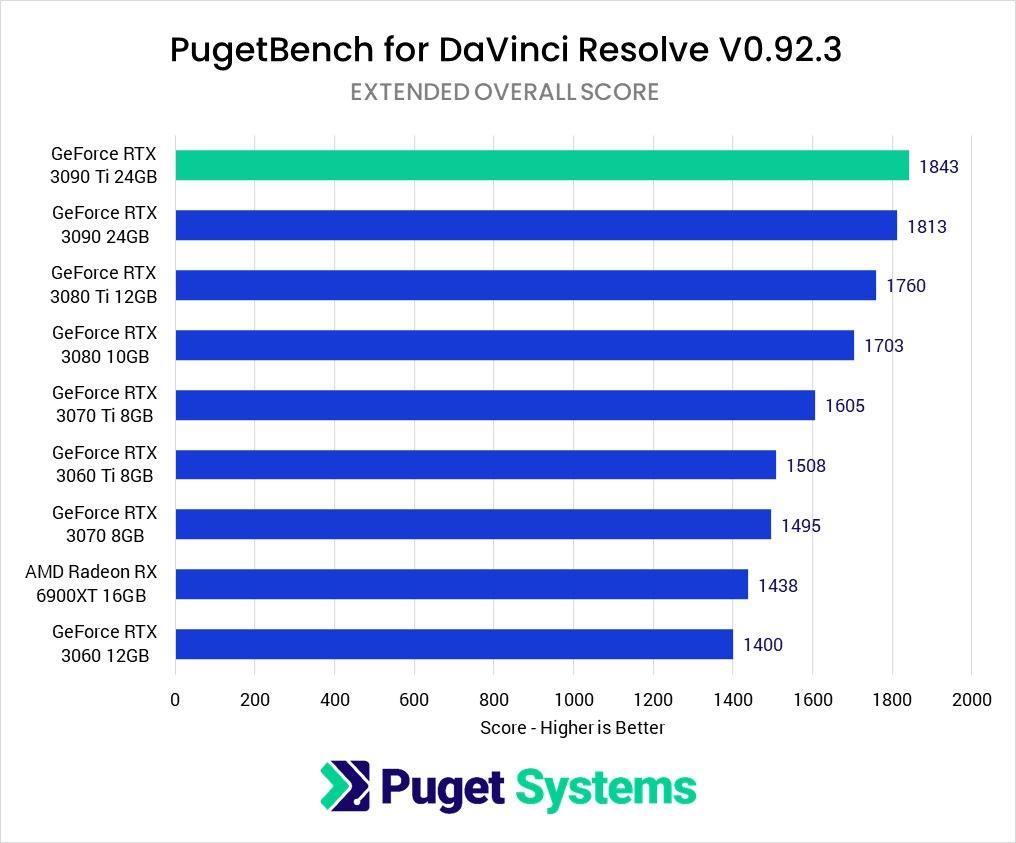 Looking at the Overall Score, you get a small performance bump as you go up the NVIDIA stack, although it is usually only a few percent for each step up. That means that between the slowest and fastest GPU we tested, you are only looking at about a 30% difference in performance.

The RTX 3090 Ti in particular ended up scoring only 1.7% higher than the RTX 3090. That isn't a terrible large difference considering the higher cost and power draw, but this Overall Score does include a number of tests that are often CPU bound. To get a better idea of the maximum performance difference between these cards, we should hone in on the "GPU Effects" portion of our benchmark which looks at tasks like TNR and various GPU-accelerated OpenFX. 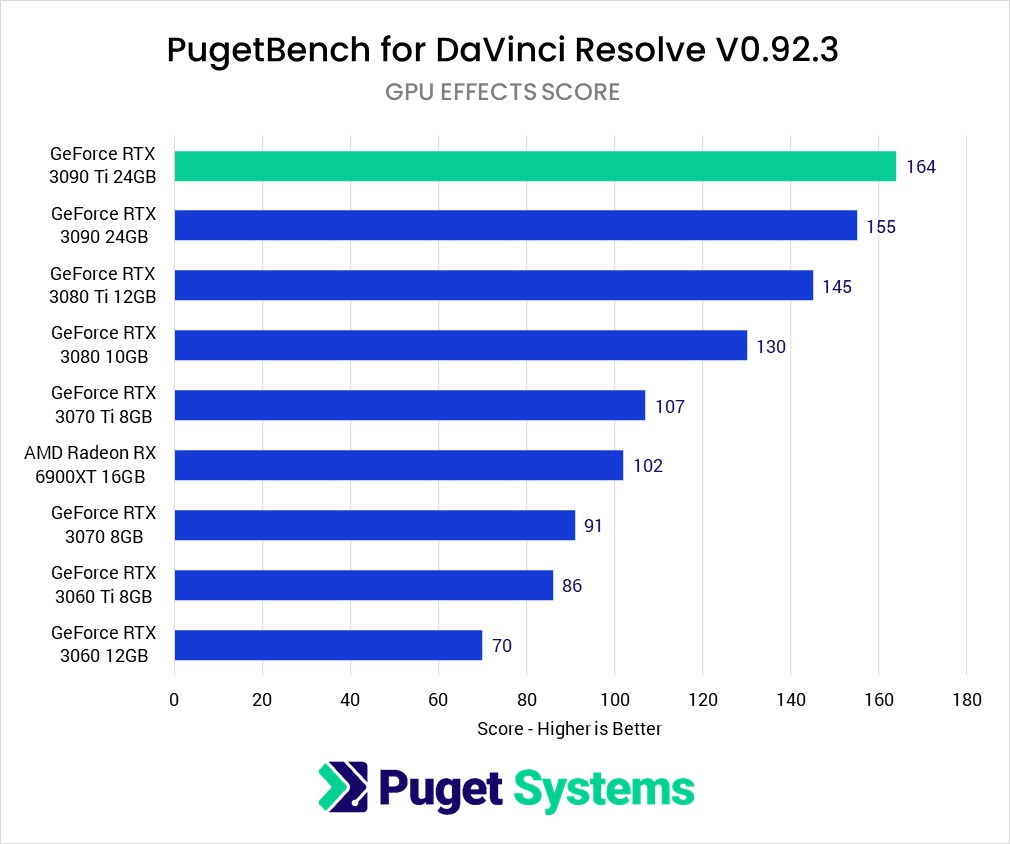 The "GPU Effects" portion of our benchmark looks at the performance of individual GPU-accelerated effects such as temporal noise reduction, film grain, lens blur, optical flow, and face refinement. In our testing, these effects easily show the largest benefit from having a powerful GPU, which means that they should give us the best look at the maximum performance gain you may encounter from each of the GPUs we are testing.

In this case, the GeForce RTX 3090 Ti shows a 6% bump in performance over the RTX 3090, which is much better than what we saw in the previous section, but still nothing groundbreaking. In fact, since Resolve tends to gain around 70% more performance for each GPU you add, two RTX 3080 cards should be able to get you somewhere in the range of 35% more performance than a single RTX 3090 Ti – although they would have a higher total power draw, require a more complicated hardware setup, and only have 10GB of VRAM versus 24GB.

How well does the NVIDIA GeForce RTX 3090 Ti perform in DaVinci Resolve Studio?

Overall, the NVIDIA GeForce RTX 3090 Ti provides a small benefit over the RTX 3090 in DaVinci Resolve Studio, although the difference is at most around 6%. Considering that the RTX 3090 Ti has a MSRP is that is $500 higher than the RTX 3090, consumes 100W more power, and doesn't any additional VRAM, the RTX 3090 Ti is likely going to be a bit of a hard sell for most Resolve users.

One of the areas where we still need to do addition testing is the question of multi-GPU setups. Using two, three, or even four GPUs in a single workstation is fairly common in high-end Resolve workstations, but with a 450W power draw (and thus, 450W of heat output), it may end up being quite a challenge to get multiple RTX 3090 Ti cards stable inside a single system. We anticipate that a dual GPU setup should be possible with adequate chassis cooling, but even that is going to require additional testing to determine.

And most likely, if you are considering the RTX 3090 Ti, you are also thinking about using multiple GPUs. Either multiple RTX 3090 Ti cards for maximum performance, or whether multiple RTX 3080 (or similar) cards is a better option. Dual RTX 3080 should end up being a good chunk faster than a single RTX 3090 Ti, although you would have to give up quite a bit of VRAM (10GB vs 24GB). Whether VRAM or raw performance is more important is going to depend entirely on your workflow, but be on the lookout for a future article looking at multi-RTX 3090 Ti setups.

As we noted at the beginning of this article, we want to again mention that if you do decide to use the RTX 3090 Ti, it will be both louder and hotter than any other RTX 3000 series card due to the much higher power draw. You will need a decent power supply, and a chassis with plenty of airflow to keep the GPU cool. If either of those are not up to the task, power draw or thermal throttling may well end up causing the RTX 3090 Ti to actually end up performing slower than the lower wattage cards like the RTX 3090.

As always, keep in mind that these results are strictly for DaVinci Resolve Studio. If you have performance concerns for other applications in your workflow, we highly recommend checking out our Hardware Articles (you can filter by "Video Card") for the latest information on how a range of applications perform with the latest NVIDIA and AMD GPUs, as well as with different CPUs and other hardware.