Skip to content
Always look at the date when you read an article. Some of the content in this article is most likely out of date, as it was written on July 7, 2019. For newer information, see our more recent articles.

AMD launched their new line of mainstream Ryzen processors today, along with a new motherboard chipset called X570, but we were only provided with a sample of the low-end Ryzen 5 3600 ahead of time. We have ordered the Ryzen 7 3800X and Ryzen 9 3900X and should be testing them soon, but until then we can at least look at how the overall architecture is doing with the example we do have. 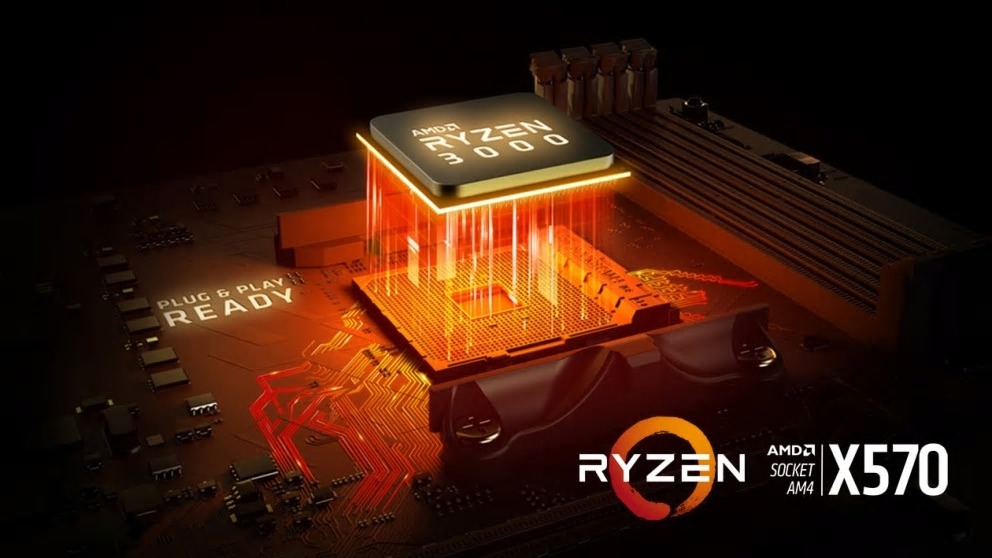 While this is technically the third generation of Ryzen CPUs from AMD, this is actually the first set of processors which use their new Zen 2 architecture. The first and second gen Ryzen chips were built on Zen and Zen+ architectures, respectively, and the main difference there was a die shrink from 14 to 12nm. The actual "floor plan" for the chips didn't change much, so performance gains were limited to clock speed increases that were facilitated by the smaller die size.

With Zen 2, and the new Ryzen 3000-series processors, there has been a move to a multi-chip module design with the I/O components separated onto their own die. The compute sections of the CPU – nicknamed "chiplets" – also received another die shrink down to 7nm. Between those and other architectural changes, Zen 2 based processors are expected to have higher clock speeds, improved performance per clock, and higher core counts. That combination should give users great performance from these new AMD chips!

For this preview we are going to just look at the Ryzen 5 3600 sample AMD sent us and compare it with one previous-gen Ryzen 5 processor and one Intel Core i5 model that is similar in price and specifications. Our full review with additional Ryzen 3rd Gen chips will include a few other processors for a better overall comparison, but that will have to wait till AMD sends us the CPUs we've ordered.

Another topic which we will investigate in more depth in the coming weeks is memory speed since this new generation of processors supports higher RAM frequencies. The exact speeds AMD officially supports are a bit tricky to find, and they vary depending on factors like how many memory modules you are using, but I did want to include a small taste of this testing here in our preview article. As such, the Ryzen 5 3600 was run through these benchmarks with both 2666MHz and 3200MHz memory and both results are included below. The older AMD processor, as well as the Intel counterpart, officially do *not* support that speed – so we tested them with only 2666MHz.

Since the focus of this preview is on CPU based rendering performance, we used two benchmarks: Maxon's Cinebench R20 and Chaos Group's V-Ray Next Benchmark. These are the latest in a long line of benchmarks from both companies, and they use their latest engines to see how quickly different systems can render still images. Both include a test that involves all available CPU cores, and the V-Ray Next Benchmark also includes a GPU-rendering mode which can utilize the CPU as well. Please keep in mind that if you are working with animations, rather than just still images, there will also be processing time between each frame which may behave differently than the heavily-threaded rendering itself… so single-threaded performance, which we are not looking at here, will matter too.

As always, each test was run 2-3 times per hardware combination and the best result is included below.

First up, here are the performance numbers for Cinebench R20's CPU test – which uses all available cores to render a single scene: 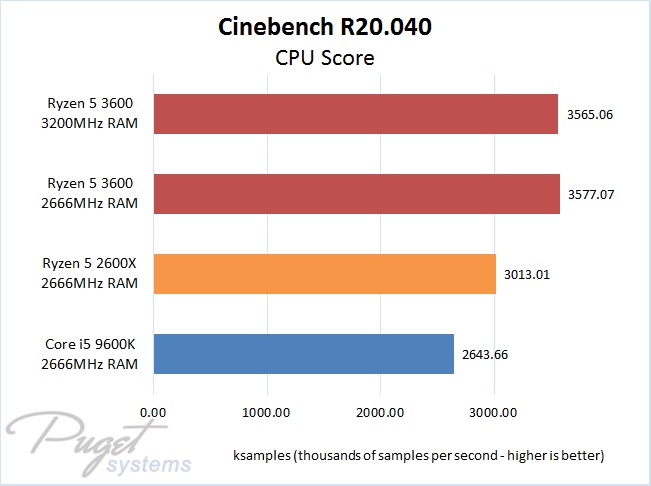 The V-Ray Next Benchmark test includes a few different modes, so the results are spread across three graphs in this gallery: 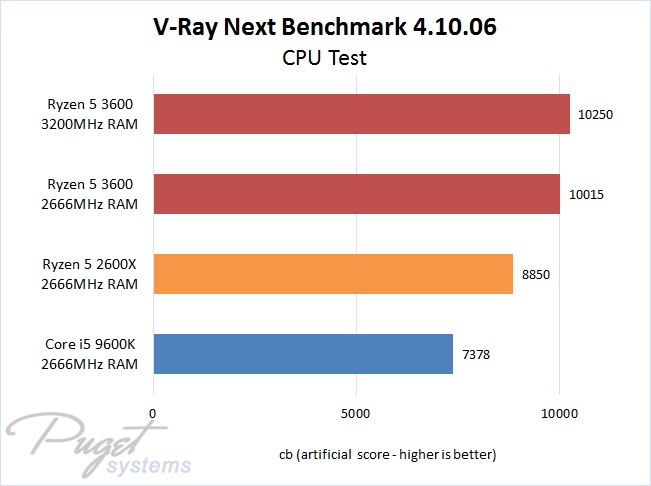 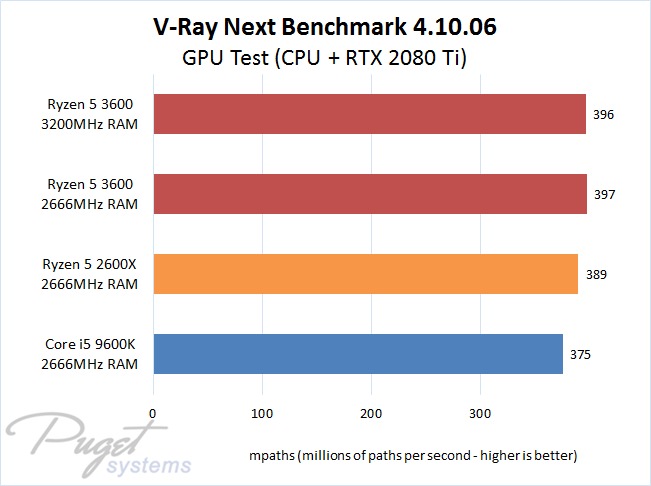 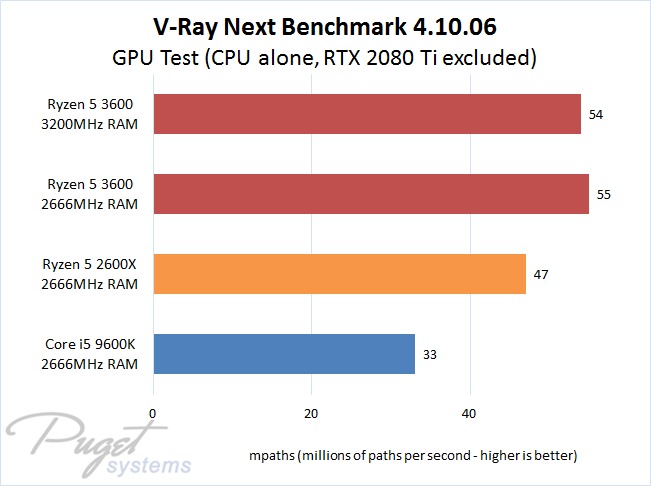 AMD's Ryzen 5 3600 performs really well in both of these benchmarks, outpacing the previous generation 2600X by about 15% and beating Intel's Core i5 9600K by over 30%. This isn't quite a fair comparison to Intel in one sense: all of these are six-core processors, but both of AMD's Ryzen 5 chips have SMT while the Core i5 here lacks Intel's version of that technology (Hyperthreading). That is definitely hurting Intel's performance here, but at the same time, both the 3600 and 2600X are less expensive than the 9600K. Intel doesn't have any 6-core chips in the 9th Gen Core series with HT to include as a more "fair" comparison either, and while we could have gone back and tested the older Core i7 8700K to find that 6-core / 12-thread feature combination it was even more expensive.

Looking just at the 3600 now, and comparing its performance with 2666MHz and 3200MHz memory, there is less of a difference than I expected. Both Cinebench R20 and V-Ray Next GPU mode showed no significant difference – the 2666MHz memory actually scored a little better in those test, but the results are well within the margin of error. V-Ray Next's CPU mode did have the 3200MHz memory come in about 2% faster, which is bordering on margin of error too… but from the way, a lot of AMD fans talk about the importance of memory speed I had expected a bigger difference. We'll see if this changes when looking at a wider range of CPUs and RAM soon. 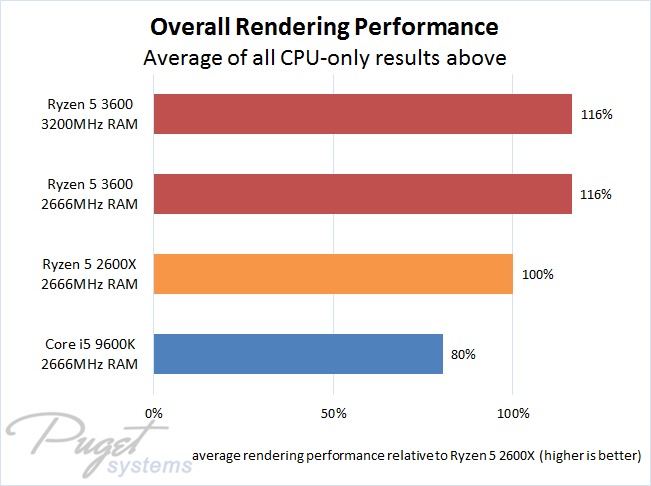 AMD has come out swinging with the launch of the third generation of Ryzen processors, and in well-threaded applications like rendering it looks like they will topple Intel's mainstream Core series. This is very similar to the situation we saw last year with AMD taking the high-end desktop (HEDT) multi-threaded performance crown from Intel with their second generation Threadripper processors – but this time they seem to have done it with better performance at the same core count rather than by simply having more cores than Intel (which was Threadripper's trick). Admittedly, this preview with a single Ryzen 5 3600 is limited in scope… but if the higher end models follow suit, AMD is poised to do very well in many applications. Hopefully, the X570 platform proves stable, enabling its use in our workstations!